On Thursday Energy Transfer Partners (ETP) released earnings that beat expectations on just about every measure. Midstream infrastructure businesses generally don’t report results too far from consensus – surprises usually come in other ways (more on this below). ETP’s $1.94BN of EBITDA (Earnings Before Interest, Taxes, Depreciation and Amortization) was more than 10% ahead of Street estimates. NGL/Products, Midstream, Natural Gas and Crude Oil segments all delivered impressive results.

ETP’s yield has remained frustratingly high for investors and management. At 12%, it reflects substantial investor skepticism about the prospects of its continuation. CEO Kelcy Warren might have felt that Thursday’s results would cause a sharp revaluation higher, whereas ETP managed a muted 4% gain. Its yield remains stubbornly high.

Earlier in the week Warren had testified in Delaware at a civil class action suit against ETP’s General Partner, Energy Transfer Equity (ETE). The plaintiffs contend that a 2016 issuance of convertible preferred securities to 31% of unitholders (ETE senior management) represented an impermissible transfer of value away from investors. We have written about this before (see Will Energy Transfer Act With Integrity?) The offending securities were issued at a time of severe weakness in ETP and ETE stock prices due to the ultimately failed effort to merge with Williams Companies (WMB).

In short, the securities allowed management to reinvest their future dividends at the then current low price, but further protected them from future dividend cuts. A rising stock price would see them reinvesting at an historic, lower level, and if the price fell due to a dividend cut their special dividends would be partially protected.

It looked like an aggressive ploy to force WMB to cancel the deal, since the result was to dilute the value of the merger to WMB investors. But even after the deal collapsed for other reasons (a revised tax opinion that conveniently rendered it unworkable), the new securities remained.  Kelcy’s ill-advised pursuit of WMB justified issuing special securities with the stock price at its low, and he wanted to keep them.

Investors sued ETE, quite rightly claiming self-dealing by management. Judge Glasscock will soon decide the legal outcome. However, the market has already offered its opinion. Energy Transfer is a well-run business that will provide management a sweetheart deal given the chance. Strong operating results from attractive assets receive a valuation discount because of sly management. As we said once before, investing with ETE is like sitting at a high-stakes poker table with a strong hand drawn from a deck of marked cards. Energy Transfer’s securities are valued accordingly. 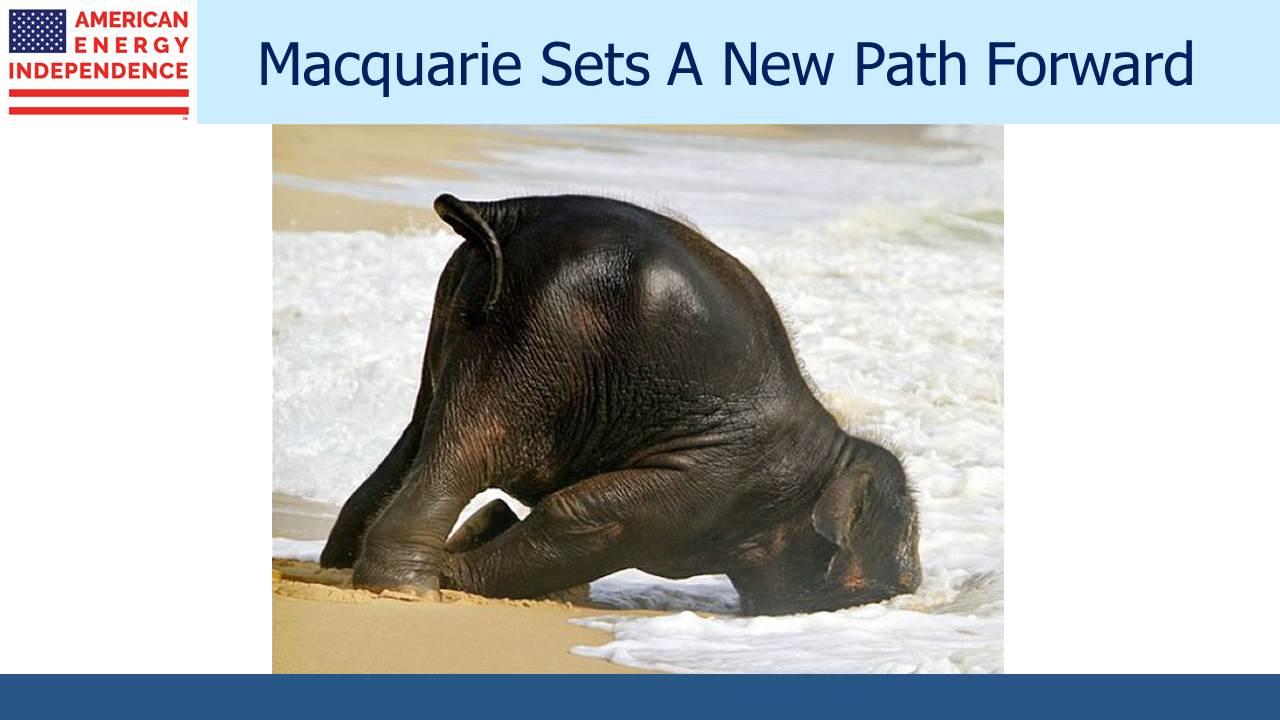 In a move that stunned investors, MIC announced weak operating results, lower guidance and a dividend cut. MIC’s infrastructure businesses are not limited to energy, since they have an aviation division too. But they are included in some energy infrastructure indices as well as held by investors who focus on the sector. They just showed why market sentiment towards such businesses remains so poor.

As recently as November, MIC announced a 10% dividend hike, forecasting 2018 growth in Free Cash Flow (FCF) of 10-15%. Just three months later, they cut the dividend by 31% and lowered their FCF growth forecast. It’s true there had been a change in CEO in the interim, but investors had little reason to expect this type of outcome.

The subsequent conference call showcased why so many investors have lost faith in infrastructure businesses. When asked to justify the dividend cut so soon after raising it, CEO Christopher Frost commented, “Could we have taken a different path?…Yes…But maintaining our dividend policy would likely have meant…forgoing our growth agenda” (emphasis added).

This is exactly what has alienated investors and caused new buyers to pause. MIC invited a set of equity holders that valued growing dividends. They then chose to repurpose those cashflows to invest in new projects, even though they haven’t recently demonstrated much ability to estimate returns on investment. So what type of investor should hold MIC? A fairly fleet-footed one.

A management team that doesn’t have a consistent long term outlook will draw investors who don’t care about the long term view. MIC was understandably down 38% on the day. It’s unclear what anybody should expect from the company.

Too many American energy infrastructure businesses have let investors down. Often they’ve chosen growth over what their existing financiers want, and sometimes they’ve ignored their fiduciary obligation, shredding expectations and losing support. Valuations are attractive in part because of management teams that continue to alienate investors.

It doesn’t have to be so. Canada’s Pembina Pipeline Corporation (PBA) also announced good results last week. They have no history of issuing special management-only securities. They generally do what they tell you. They describe their financial model as based on “guardrails” with metrics oriented towards 8-10% FCF growth while maintaining their investment grade credit rating. On their conference call they said acquisitions were low on their list of priorities, behind operating existing assets more efficiently and building from scratch. Investors rejoiced, driving their dividend yield down to 5.25% as the stock rose. The Canadians seem to be getting it right.

We are invested in ETE and PBA

Discussing the Shale Revolution with Enlink Midstream Send in the Canadians!
Scroll to top