Wildfire season began abruptly in California last week. Bankrupt utility PG&E’s planned widespread power outages are a response to last year’s fires, which were blamed on high winds and faulty transmission lines. Having friends in affected areas, as many of us do, certainly brings home the tragedy and fear that comes when you might lose your home. Claims for fire-related deaths and property destruction last season overwhelmed PG&E’s financial resources. Apportioning blame is complicated – what seems certain is that Californians will endure higher electricity prices – both to make up for underinvestment in transmission infrastructure as well as to achieve the state’s 2050 goal of lowering Greenhouse Gas (GHG) emissions to just 20% of their 1990 level.

Californian electricity prices average 16.6 cents per Kilowatt/Hour (KwH), substantially above the U.S. average of 10.5 cents, but still lower than New England (see An Expensive, Greenish Energy Strategy). The EU average is 23.4 cents, so there’s probably plenty of room for prices to rise. Energy in America is cheap. Stores on busy streets keep their doors open in summer, blasting cool air on to passers-by in hopes of luring them in. Energy prices are not a political issue. They may never be this cheap again. 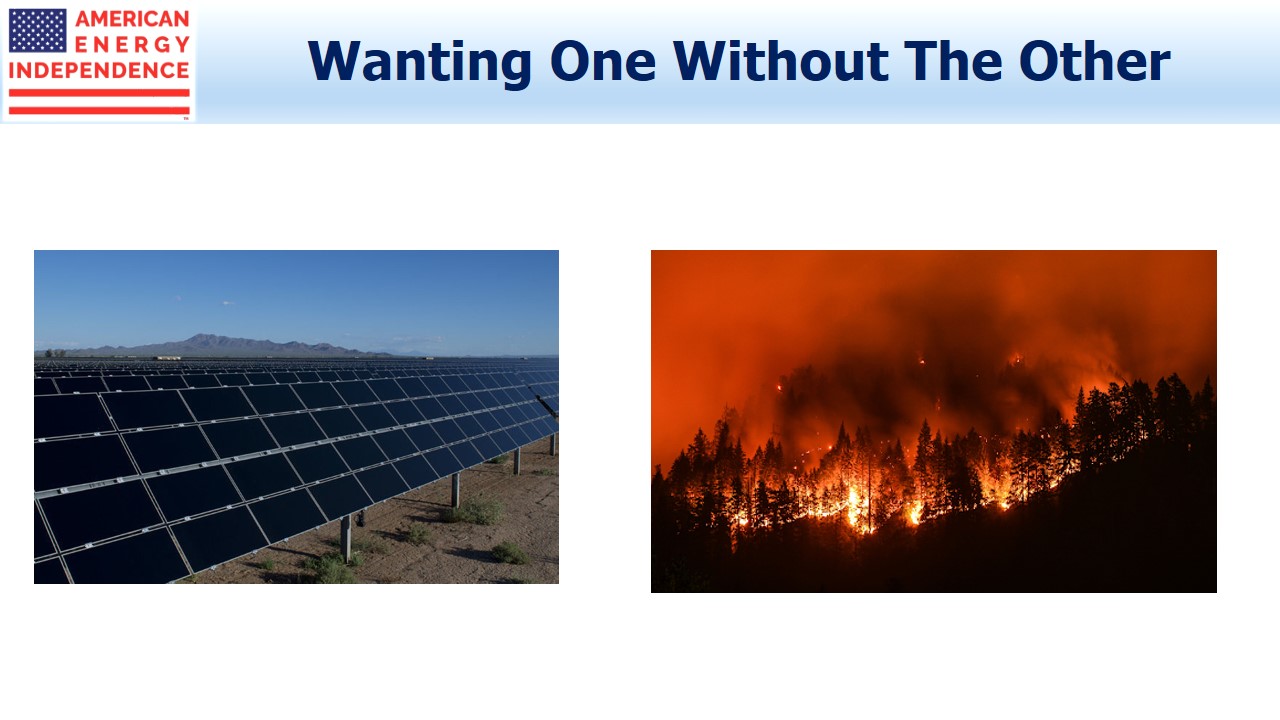 Like the U.S., California’s GHG emissions peaked over ten years ago. But while President Trump withdrew America from the Paris Accord, California has adopted laws intended to reduce GHG emissions even below targets the Obama administration considered as part of its “Mid-Century Strategy”

Lowering emissions enjoys widespread support in California. They even have a cap-and-trade program, the subject of a recent lawsuit from the White House because it includes Quebec, possibly violating the Federal government’s exclusive responsibility for foreign policy

What’s interesting is to consider the political support for California’s laws mandating GHG reductions. Although it’s often noted that California’s GDP is bigger than all but seven countries, even that state’s planned 80% reduction in GHGs won’t save the planet. The heavy lifting is about to begin. The Transportation sector is 41% of California’s GHG emissions. Electric vehicle adoption will need to grow substantially. Demands on the state’s beleaguered electricity transmission infrastructure will correspondingly increase, although GHG emissions from the power sector are also expected to fall. 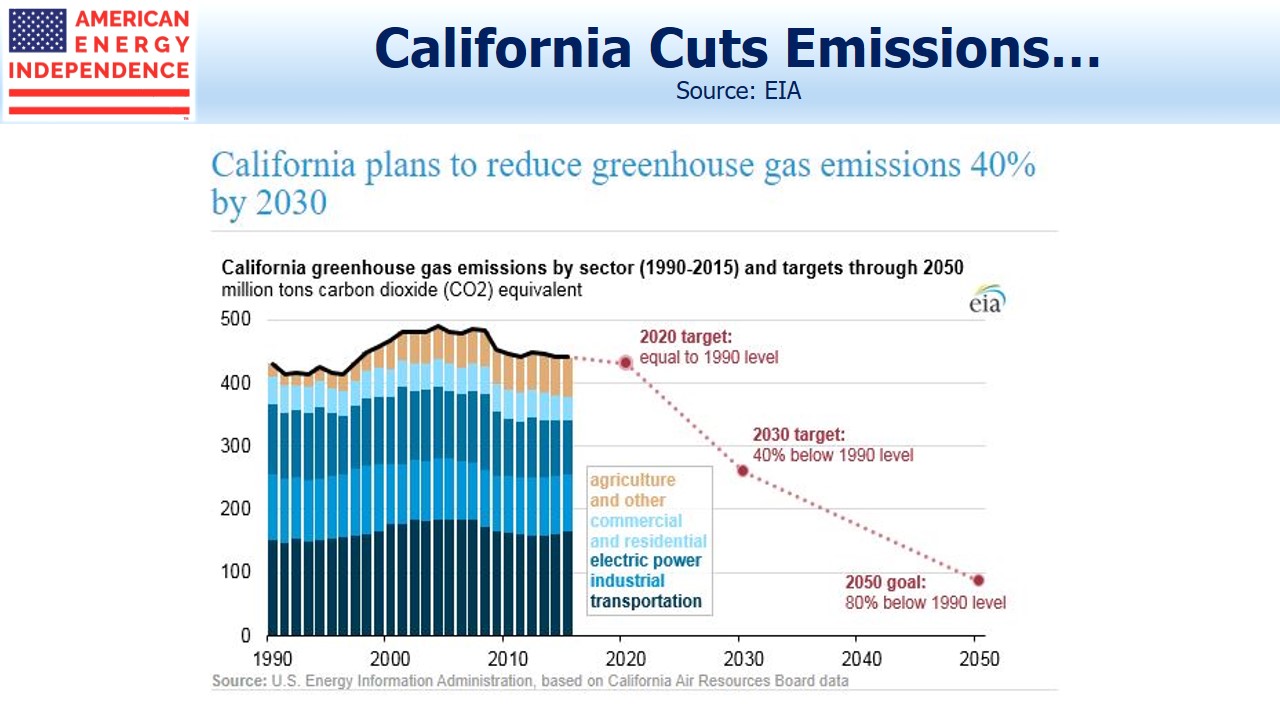 In 2017 Californians generated 424 Million tons of GHGs, pretty much the 1990 level. By 2030, state law mandates that annual emissions must be 40% lower, reduced by 170 Million tons of CO2 equivalent. The world generates 35 Gigatons, so the Golden State’s contribution will be to keep the world’s total 0.5% or so less than it otherwise would be.

California’s emissions policies are laudable. But global success unfortunately won’t come solely from this effort. Their hope is that they’ll set an example that other states and countries will adopt.

So it’s worth looking at China, where GHG emissions are expected to increase by over 2 Gigatons during the same period. The heroic efforts of Californians to slash their emissions over a decade will be offset by just nine months of growth in China. 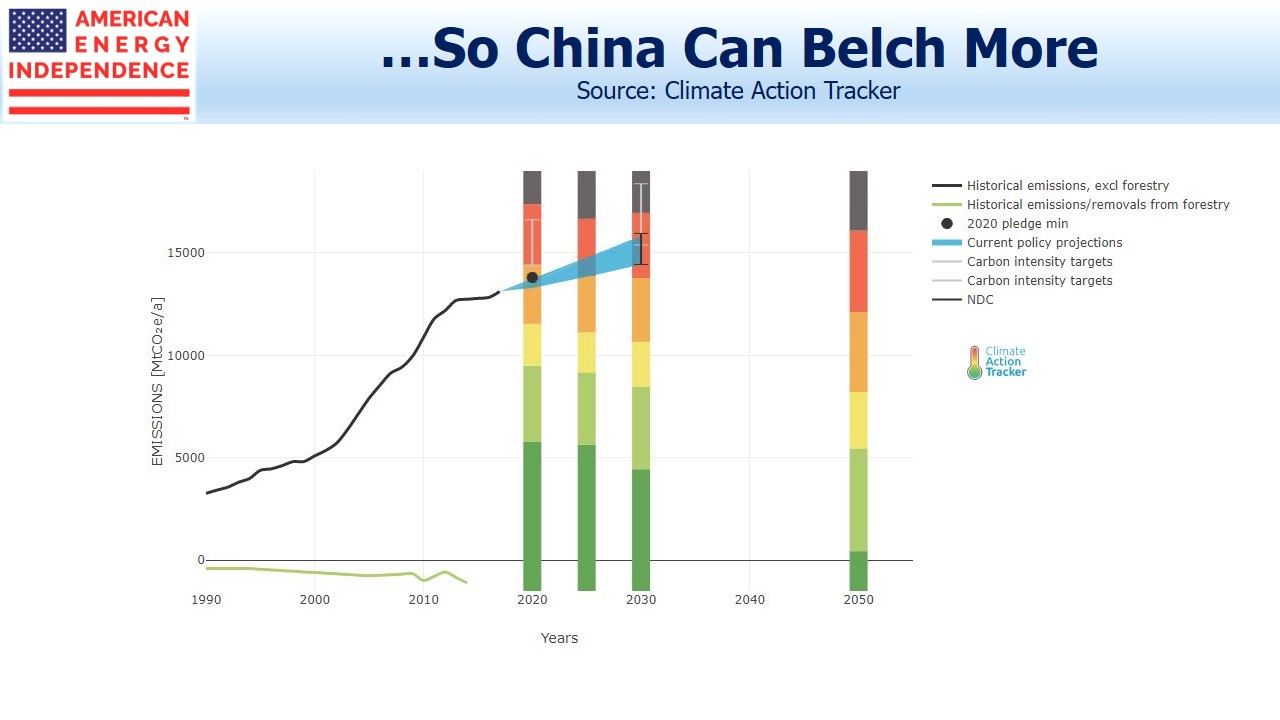 This is the Climate Change Conundrum. The rich world says it wants lower emissions. California is a leader in this respect, although no country is on track to meet its Paris Agreement pledges. Meanwhile, developing countries like China and India plan sharply more energy consumption, so as to raise living standards. By accepting higher power prices, Californians are accommodating rising living standards in China by lowering their own. Moreover, poorer countries are far more exposed to rising sea levels and other consequences of climate change than richer states, which possess the resources to protect themselves. California is sitting on the high, dry moral ground.

The Paris Agreement isn’t working. Global emissions are rising. It’s the tragedy of the commons on a global scale. Californians will eventually realize that their substantial efforts are being hijacked as GHG emission capacity by others, rather than inspiring similarly noble, selfless acts. China, the world’s biggest emitter, is ranked “highly insufficient” by Climate Action Tracker for its efforts, as emissions continue to grow rapidly. The U.S., which emits half that of China, is ranked even lower, at “critically insufficient”, because of its withdrawal from the Paris Agreement despite lowering emissions more than any other country. Shifting energy intensive industries from America’s relatively clean energy mix to China’s is going in the wrong direction.

The current approach needs to be rethought. Perhaps what’s required is a set of agreed objectives that are attainable, even if those objectives fall short of what the UN’s IPCC report recommends. Extremists such as the precocious Greta Thunberg with her global scolding at the UN (“How dare you?”) and Extinction Rebellion are irritating or simply wacky. Movie stars who speak on climate change before hopping back onboard their private jet easily betray their hypocritical, virtue signaling goals. They make a few headlines, but the extreme solutions they advocate aren’t supported and aren’t being implemented. They are counter-productive. 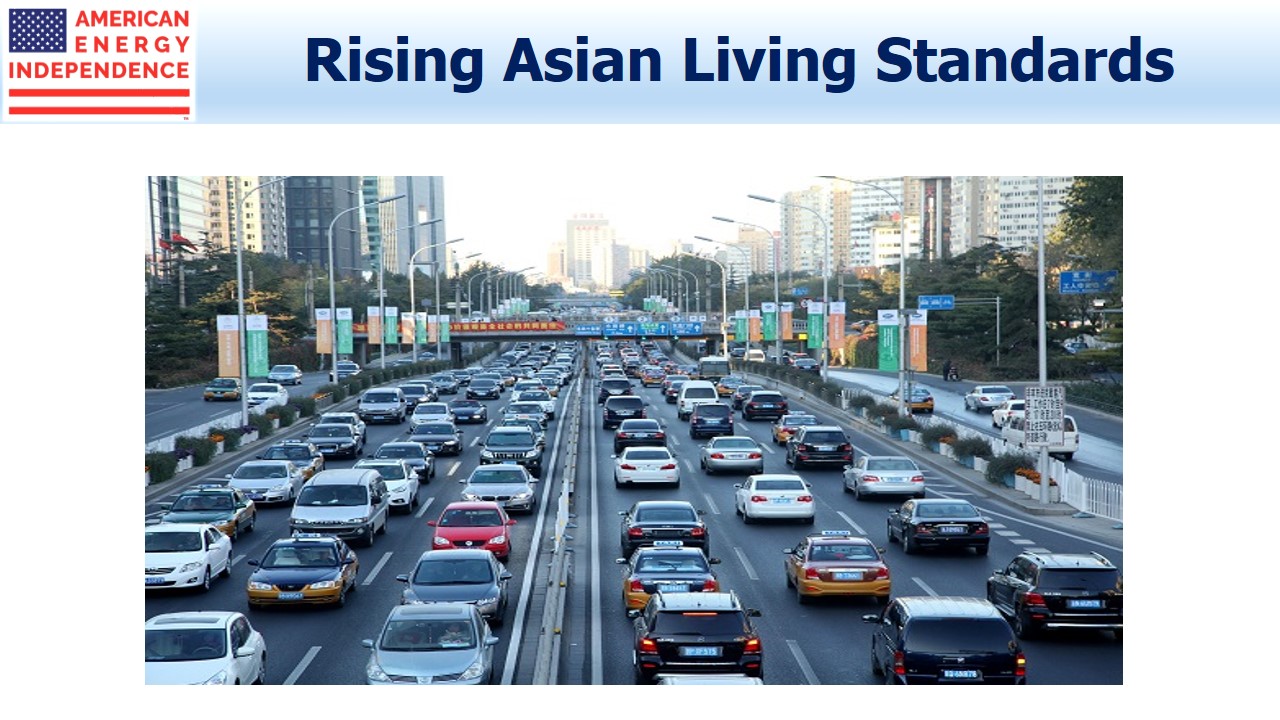 There’s probably not much popular support in America for green policies to support higher living standards in Asia. What remains clear is that solutions should include substitution of one relatively clean fossil fuel (natural gas) for the dirtiest one (coal), since fossil fuels are what work. California relies on natural gas for 46% of its in-state power generation. Natural gas pipeline companies will be needed more than ever.

Drilling Down on Shale Depletion Rates Tallgrass Responds to Critics, Missing the Point
Scroll to top