Last week John Kerry, Climate Czar, warned that natural gas pipeline assets could become “stranded assets” within 30 years. Democrat attitudes toward fossil fuels remind one of St. Augustine (“Lord, make me chaste—but not yet.”). Three decades of debauchery before celibacy shows self-discipline, under the circumstances. Since Biden now owns U.S. climate change policy, indulging the fantasies of climate extremists must be balanced with keeping the lights on.

Investors and management of natural gas assets recognize that they offer the fastest path to lowering emissions, not solar panels and windmills. Power generation from renewables will grow to be sure, but with global energy consumption expected to increase by half through 2050, every energy source will grow. 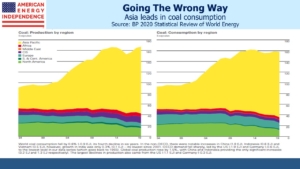 Last week we chatted with senior management from Tellurian (TELL), to discuss their plans for exporting Liquified Natural Gas (LNG). Reaching a Final Investment Decision (FID) to construct their Driftwood export facility in Louisiana relies on getting enough customers signed up. Japan is the world’s biggest importer of LNG, with China second. Asia is almost three quarters of global LNG trade, therefore critical to global trends.

News in recent months has been encouraging. Extended cold weather in north east Asia drove spot LNG prices to over $35 per MCF, more than 10X the U.S. benchmark at Henry Hub. Prices have eased since, but the January 2022 JNK futures trade at $8, a sufficient premium to U.S. prices to cover transportation costs.

TELL management sees LNG as critical to emerging Asia, as it struggles to reconcile the desire for rising living standards with controlling emissions. China intends to increase its emissions for at least the next decade, notwithstanding their vague commitment to get to zero by 2050. 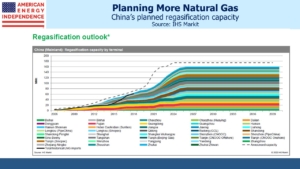 Last year Beijing temporarily relaxed some of the constraints on coal that had caused some switching to natural gas, to boost growth during the pandemic. But TELL drew our attention to last year’s creation of PipeChina, a $32BN entity created from Sinopec and PetroChina to own the country’s trunk pipeline network for natural gas. The intention is to deregulate LNG imports, creating more competition and increased sensitivity to demand.

There is enormous potential for China to use more natural gas, which provides less than 10% of their primary energy needs and only 3.1% of power generation as of 2019 (according to IHS Markit). Reducing China’s current and projected coal consumption must be the focus of any climate change discussion. The world should hope that China’s natural gas pipelines are heavily used, and for much longer than the three decades our globe-trotting climate czar envisages for similar U.S. assets. Regasification capacity, a measure of China’s ability to import LNG, is going to almost double over the next five years.

In 2019, China imported 62.5 million tons of LNG, equivalent to 8 Billion Cubic Feet per Day (BCF/D) of natural gas. The U.S. is currently exporting around 11 BCF/D of LNG.

Check out What’s Cool About LNG?, a fascinating six-minute video that shows how natural gas burns with less carbon output than a candle, and how a lit cigarette isn’t hot enough to ignite LNG. 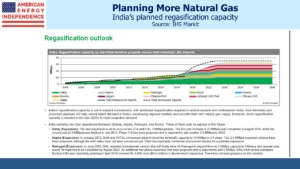 Nonetheless, Indian LNG imports more than doubled over the past decade, with Qatar shipping the most. Regasification capacity is set to grow significantly over the next five years, albeit not as fast as China. With domestic production falling, LNG imports are likely to provide more than half India’s natural gas for the foreseeable future.

Coal consumption is moving strongly in the wrong direction, fueled by non-OCED demand in Asia. In John Kerry’s Augustine moments, he’ll realize that the world needs natural gas to get us off coal. The natural gas industry understands that too.