Earnings season often produces memorable soundbites during the conference calls that follow. Last summer, Energy Transfer (ET) CEO Kelcy Warren said, “A monkey could make money in this business right now.” (see Running Pipelines is Easy). Kelcy is not overly burdened with modesty, but at least he is backing up his brash comments with results. ET’s 4Q18 report completed a strong year, and they reaffirmed previous 2019 guidance that is at the high end of expectations. ET is seeing the benefits of its exposure to Permian crude oil, natural gas and NGL logistics.

The company has an aggressive culture, which is reflected in their laudable response to troublesome environmental activists. But it also shows up in conflict with regulators in Pennsylvania, where all work was recently halted on its Revolution pipeline project due to compliance failures. When asked what lessons they’ve learned, Kelcy answered “We’ve learned a lot. Every place is not Texas.” There’s also the ill-fated pursuit of Williams Companies (WMB), which included a dubious issuance of convertible stock to management (see Will Energy Transfer Act with Integrity?, written when we thought they might). ET’s management has a checkered reputation.

Nonetheless, with a Distributable Cash Flow (DCF) yield of 14.7%, this is a cheap stock. If not for the preceding considerations it would be a bigger position for us. 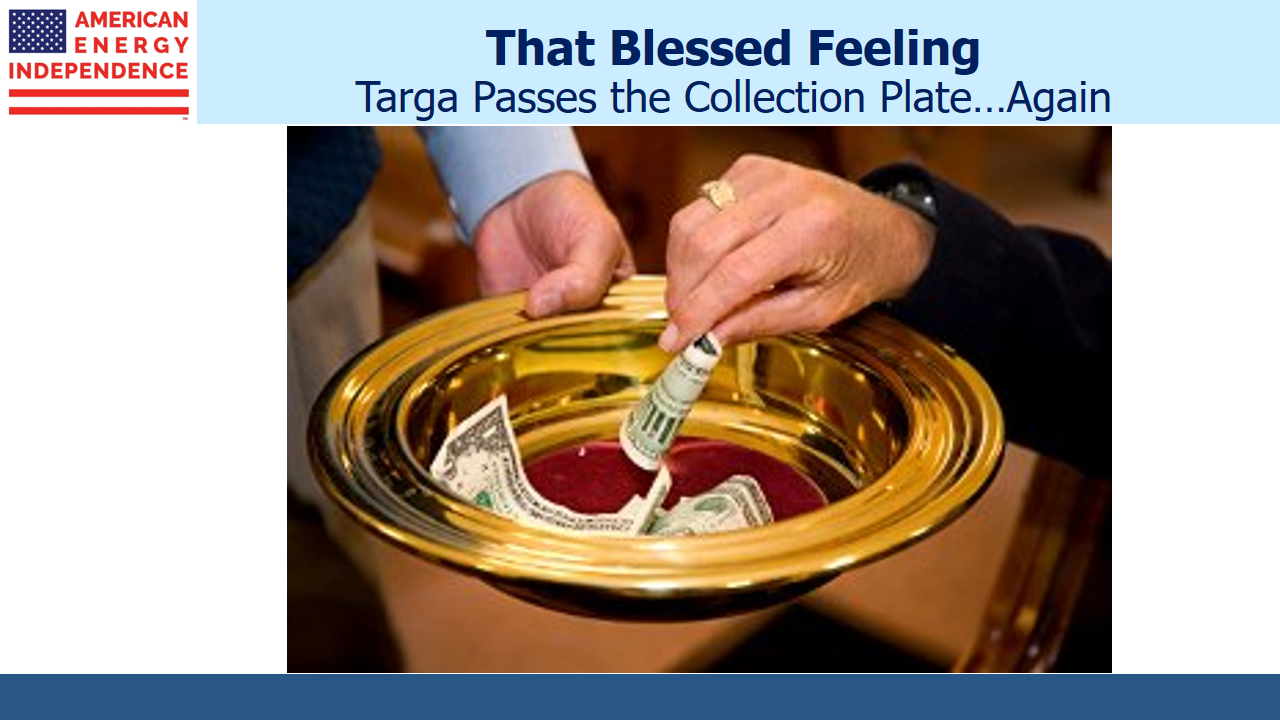 Joe Bob Perkins, CEO of Targa Resources (TRGP), provided this quarter’s memorable quote. Responding to a question about increased 2019 growth capex, he responded, “…I described it as capital blessings”.

One reason why S&P Energy has been the weakest sector for four of the past five years is the differing views on capital allocation between management and investors. Companies want to invest to grow, while investors would prefer greater return of cash, through buybacks and dividend hikes. Joe Bob knows what investors want whether they like it or not. He continued, “Those are high return strategic investments that every investor looking under the covers would want us to make. And I think most investors and analysts like you looking from the outside in, knowing what they are and when they’re coming on, wanted us to make those investments.”

Joe Bob Perkins gives the impression of tolerating his investors rather than treating them as owners. You’d think having missed selling the company at $140 per share five years ago to ET, he’d have a little more humility.

You could almost hear the TRGP Investor Relations folk wincing. The 13% subsequent drop in TRGP more than offset the bounce earlier in the week from the attractive sale of 45% of their Badlands project to Blackstone Group.

Plains All American (PAGP) saw a welcome rebound in its Supply & Logistics (S&L) segment. MLPs are often described as possessing a “toll-taking” business model that implies stability. S&L is all about exploiting basis differentials – when the price of crude oil between two different points differs by more than the tariff of the available pipeline, PAGP’s network allows it to extract additional profits that are a form of arbitrage. It is a measure of tightness in pipeline availability. In 2013 S&L generated $822MM in EBITDA.

Like other midstream companies, Plains expanded its asset base as the Shale Revolution pushed volumes higher. S&L is a volatile business, and its collapse in 2017 to $60MM in EBITDA coincided with PAGP’s increasing debt, raising leverage and leading to distribution cuts. In general, reduced payouts across the industry coincided with rising EBITDA. But in PAGP’s case they erred by relying too much on a part of their business that relies on market inefficiencies, and doesn’t provide the recurring revenues of pipelines and storage facilities.

Income-seeking investors endured two distribution cuts. The first cut came when the company simplified its structure by waiving the incentive distribution rights PAGP held in its MLP, Plains All American (PAA). A year later, and after an expensive Permian acquisition, it was cut again. Today, both securities offer identical exposure. PAGP provides a 1099 for investors who want simplicity, and PAA a K-1 for greater tax deferral with a little more complexity. By design the two stocks track each other closely.

The prior week WMB reported full year DCF of $2.872BN, up 11% on 2017, as natural gas volumes surged. On the earnings call they noted Transco reached a one day record of 15.68 million dekatherms on January 21 (around 15% of nationwide consumption), when temperatures plummeted across much of the U.S.

Overall, energy infrastructure earnings were mostly good news. We continue to expect increasing dividends this year to draw additional investors to the sector.

We are invested in ET, PAGP, TRGP, WMB.