A year ago, on February 11th, the Alerian MLP Index (AMZX) put in its low. Following a relentless 58.2% drop from its peak on August 29th, 2014, the selling was finally exhausted. As a retired bond trader friend of mine has said, “Down was a long way”. And indeed it was. The biggest and longest bear market in the history of the index since its creation in 1996. As one whose portfolio holds MLPs in rather more abundance than most readers, I shan’t soon forget the wonder with which we regarded such wholesale liquidation. We never accepted that operating performance of midstream businesses was correctly reflected in those prices. Our conclusion about 2015 was that the real issue was one of the industry needing more growth capital than was available from its fairly narrow traditional investor base (who must generally be U.S., high net worth, taxable and K-1 tolerant). We first articulated this view in The 2015 MLP Crash; Why and What’s Next. The subsequent rebound seemed to support this, since operating results for midstream MLPs generally continued to be within expectations. More recently, in MLPs Feel the Love, we continued with this theme of different investor segments by reviewing how the need for capital was causing some energy infrastructure firms to adapt their corporate structure.

The Alerian Index shows distribution growth that never faltered, dipping only slightly from 6.3% in 2014 to 5.1% in 2015. How could any sector fall so far while continuing to grow payouts? In truth, it does present a slightly rosy picture, as the historic growth figures are based on today’s components of the index. Those MLPs (mostly Exploration and Production, not midstream) who cut or eliminated distributions were ejected from the index, and they took their past with them. Some might find this revisionist history somewhat Orwellian, although hedge fund index providers routinely “backfill” their index series with performance of new additions while removing all trace of those who drop out. Since good performance tends to get you in an index and bad performance gets you out, the consequently recalculated past results are not so easily attainable. Investors who held a cap-weighted portfolio of MLPs seeking to track the index in real time experienced a rather bumpier ride. Nonetheless, today distributions are increasing. Based on quarterly earnings reported so far, R.W. Baird notes 3.0% year-on-year growth in MLP payouts.

Readers should not assume any smugness on our part simply because MLPs have rebounded 77% from the low of a year ago. Such would surely invite the Market Gods to react. There’s always downside, but it does at least appear that today’s MLP investors have committed capital with more thought than the cohort who exited in 2015. All it takes is a glance at recent history to see what the downside might look like if repeated. It wasn’t pretty, but the energy infrastructure industry has upgraded its financiers. Those whose research consists of a price chart have been replaced with a crowd of deeper thinkers, to everybody’s benefit. Many of today’s MLP investors came in because of values, not momentum. 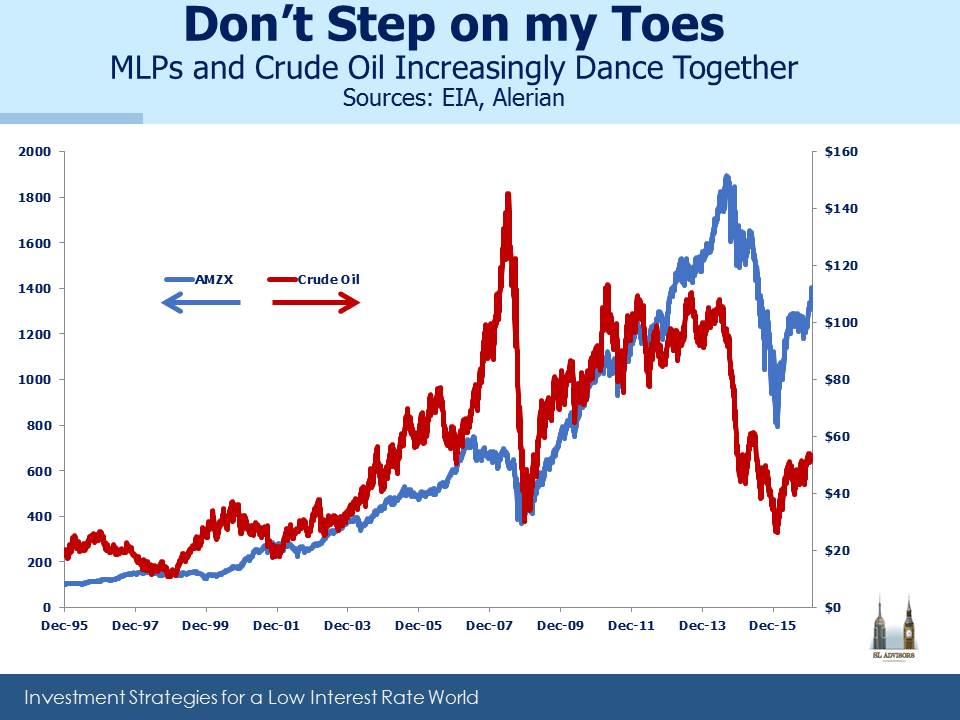 Views on energy infrastructure became synonymous with crude oil over the last couple of years, for good reason. We long ago ditched the slide showing a low correlation between the two. Although the relationship has varied substantially over the past two decades, the Shale Revolution has probably shifted things. Since MLPs care about volume, before domestic energy production was expanding the basic question concerned utilization of the existing network of infrastructure. Now that America can see its way to Energy Independence, supported by increasing domestic production, investors reasonably ask if the additions to infrastructure will be fully utilized. Fluctuations in oil and gas prices do impact production, and large swathes of the U.S. now benefit from higher oil whereas traditionally, lower crude was regarded as a tax cut. Moreover, the Energy ETF XLE now includes energy infrastructure names such as Kinder Morgan (KMI) and Spectra (SE), as well as other energy names that own infrastructure assets. This will inevitably strengthen the relationship between moves in the energy sector and the infrastructure that supports it.

Although the correlation has been falling recently, a stronger positive relationship is likely in the future. We believe there is a good case for rising crude prices (see Why Oil Could Be Higher for Longer) which will further underpin MLP performance. BP just revealed that their business model is predicated on a $60 price for oil by the end of 2018, higher than where it is today. 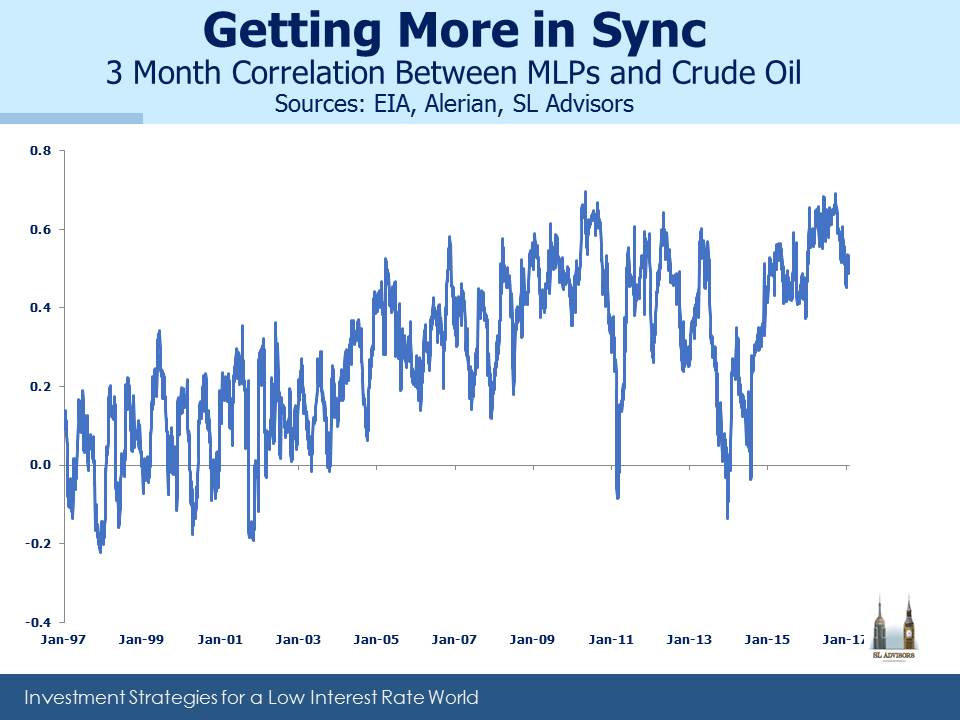 One of the minor positives of recent media coverage has been the absence of many bullish articles in the financial press. Regrettably, Barron’s finally found the confidence to move out along the ledge with a cautiously optimistic piece last weekend. Is It Too Late To Get In on MLPs’ Latest Bull Run does at least acknowledge in the title that 77% and 12 months after the low they are not exactly catching the proverbial falling knife. Fortunately, constructive articles are not yet an onslaught, so it’s still possible to own MLPs without fearing that it’s everyone’s favorite trade. A year ago bearish articles were abundant, including MLPs: Is the Worst Over? Within days of the low, this Barron’s piece (originally titled The Worst Isn’t Over as its URL betrays) countered its cautiously optimistic heading by quoting a breathless young analyst, “We’re in the early innings of the MLP down-cycle…we had a 15-year up-cycle, and now we’re a year and a half into the downturn.”

The investment writer unburdened by responsibility for managing other people’s money can draw comfort from the knowledge that the victims of poor advice may be few or even non-existent. Much is written and read on investments without being acted upon. Our own constructive tone in writing on MLPs in 2015 contrasted rather painfully with investment results that mocked our prose. One client memorably noted that it would be nice if the quality of our writing was matched by investment performance!

The fee-paying deserve the privilege of offering such feedback. Assuming the writing has remained interesting, over the last year its congruence with returns has improved dramatically.

On a separate note, from time to time fears surface that MLPs will lose their special tax status and be taxed like regular corporations. It’s highly unlikely, but in any event the status quo received support recently from Congress’s Joint Committee on Taxation which estimated foregone revenues from 2016-20 at $4.9BN, down $1BN from prior estimates.  Part of the reason is that some MLP investors pay tax on their holdings, notably investors in AMLP and other taxable, C-corp MLP funds (see Some MLP Investors Get Taxed Twice). Not only are such investors hurting themselves, but they’re helping the rest of us by making a revision of MLP tax treatment even less likely. A generous bunch.

We are invested in KMI and SE