Last week’s fears of global recession herald the late stages of Trump’s trade war. It’s already possible to see the outlines of a triumphant victory speech. The U.S. trade deficit with China is on track to fall for the first time in at least 30 years. After it reached a new record last year, critics were quick to point out the Administration’s failure to resolve an issue that figured prominently in the 2016 campaign. But as the chart shows, unless trade flows for the second half of 2019 follow a dramatically different pattern than in the past, this year will provide the White House with plenty of ammunition heading into the 2020 election. 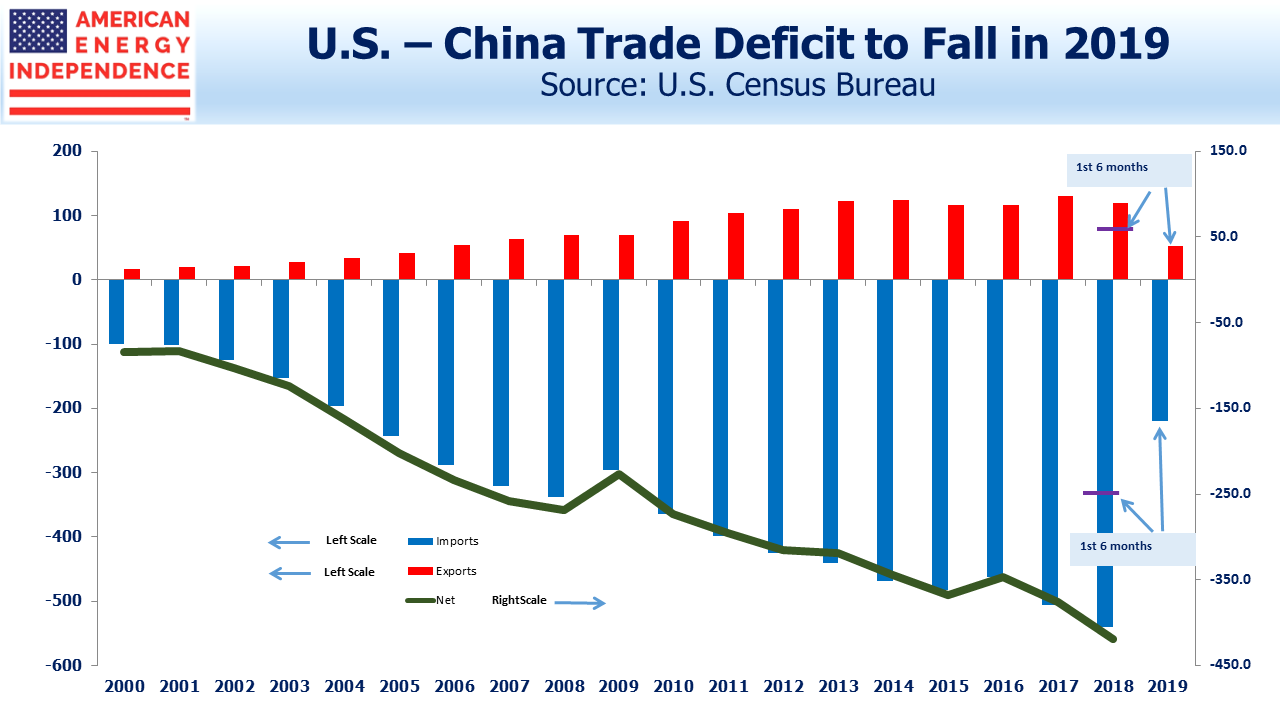 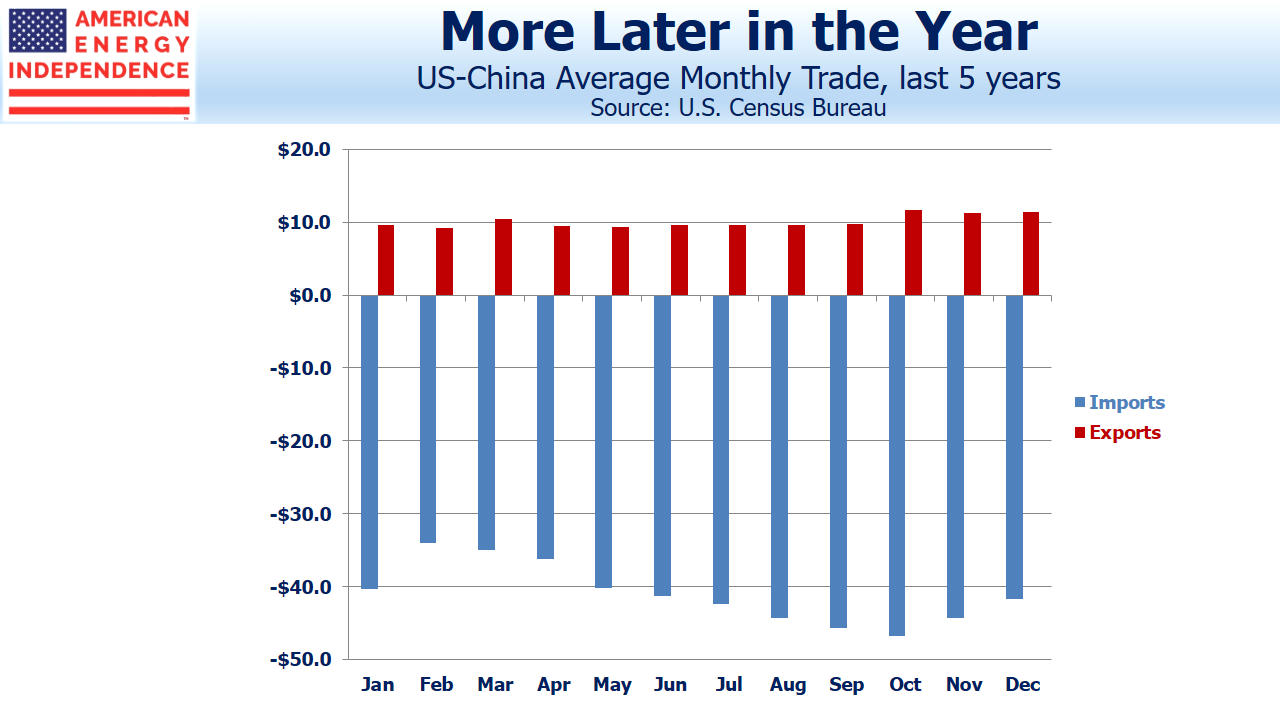 The U.S. always had a stronger hand; America’s vast domestic market means trade penetration is the joint-lowest among the world’s ten biggest economies (tied with Brazil). America has hundreds of world class companies selling goods and services globally. But many thousands more achieve years of growth without having to venture abroad. Compare that with Germany’s vaunted “mittelstand”, of small and mid-size industrial companies that export successfully around the world. Overseas customers are vital to German GDP growth, which is why ongoing trade friction tipped the German economy into contraction during the second quarter. 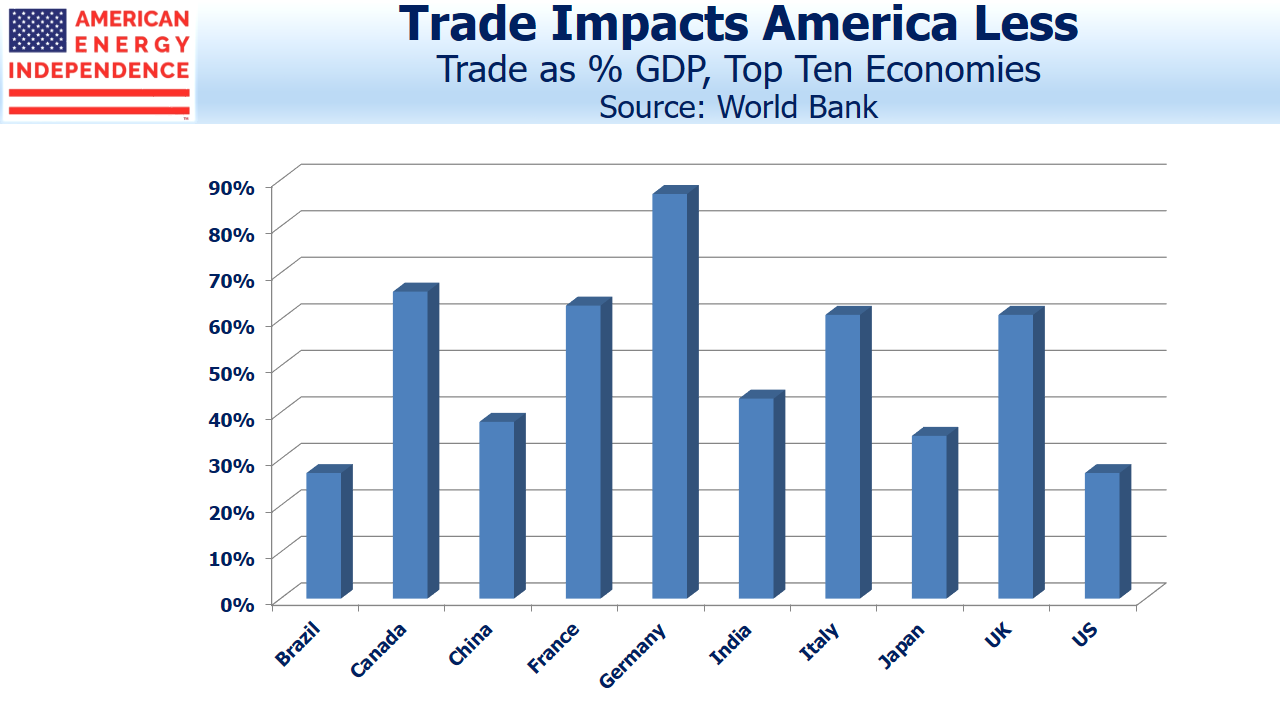 Soybean exports to China represent 10% of all U.S. farm output, so there are regions and industries that have suffered. Consequently, the Administration recently announced $16BN in aid to farmers hurt by Chinese reciprocal tariffs. But the overall result is that U.S. GDP has been less harmed than in other countries. High-tech goods such as aircraft and integrated circuits are among the biggest export categories to China, but since intellectual property is one source of conflict, these industries shouldn’t be surprised if they get caught in the crossfire.

Trump draws widespread condemnation for the manner in which he governs, but in taking on the trade deficit with China he is reflecting the views of many Americans. Since World War II, the U.S. navy has protected vital shipping lanes around the world, facilitating trade and thus promoting global prosperity. Questioning this policy doesn’t resonate with most politicians; but the emergence of other big economies, such as China, to compete with the U.S.suggests that American security policy can be less selfless than in the past.

A more transactional U.S. approach, less drawn to underwriting the greater good prompts simple questions: one is, why does the U.S. maintain troops in Germany as protection from Russia, while Germany increases its imports of Russian natural gas? America has bankrolled military support for many countries rebuilding their economies since World War II. Times are changing.

Bilateral trade deals suit the U.S. Although the White House was widely criticized for withdrawing from the Trans Pacific Partnership (TPP), negotiating within large groups blunts the leverage of the world’s biggest economy. The U.S. benefits from a series of bilateral agreements creating a hub and spoke framework, although most nations do better by coordinating with others.

Last year’s free trade deal with South Korea is an example. More recently, NAFTA was replaced with the US-Mexico-Canada Agreement (USMCA) in a pair of bilateral negotiations with Canada and Mexico that tweaked the old deal to suit the U.S.

It’s why the EU is more popular with smaller countries. Once Britain leaves the EU and opens bilateral trade negotiations with the U.S., it’ll experience the reduced leverage that comes from being outside the group.

The shrinking deficit with China is creating an opening for Trump to reach an agreement, removing the growing headwind slowing global GDP. He can boast of being the first president to interrupt the steadily increasing trade deficit with China. If he doesn’t dwell for too long, he may even head off the recession that investors increasingly fear.

What’s unclear is whether it’s been worth the fight. The U.S. Federal budget deficit relies on financing by foreign investors. Because America doesn’t save enough to meet its borrowing needs domestically, the surplus dollars held by trade partners, including China, get reinvested into U.S. financial assets, such as treasury bonds. A lower trade deficit suggests fewer excess dollars owned by foreigners to be invested. This in turn means more U.S. debt will need to be financed by domestic savers, which will require higher interest rates as an inducement. And even though the U.S. has a strong hand in trade negotiations, slowing GDP growth doesn’t help anyone.

Provoking trade friction may not always be smart policy, but it does reflect popular opinion. It is democratic. Trump’s critics are many, but he is a reflection of American views on trade.