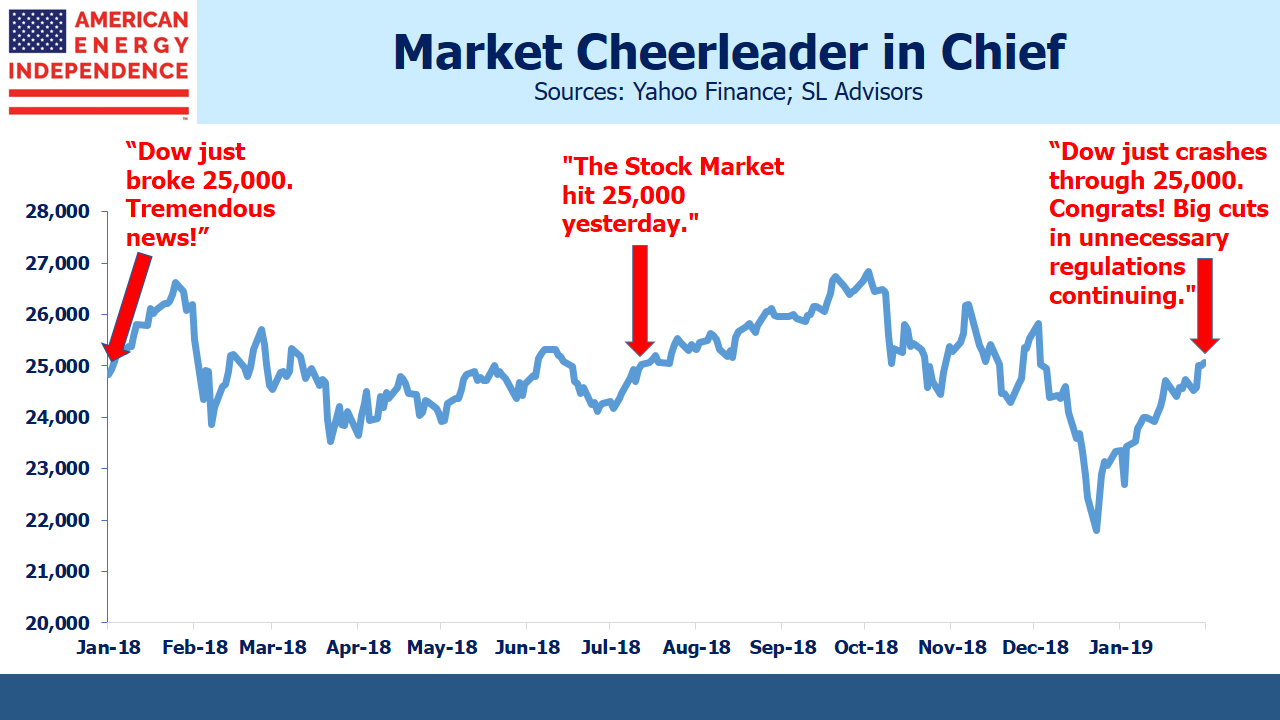 This president probably cares more about short term moves in stocks than any predecessor. He has adopted it as a report card of how his administration is doing. Past presidents have generally positioned themselves above the fray, concerning themselves more with economic data such as GDP growth and unemployment. These are important to President Trump too, but the Dow provides a real-time gauge of his performance, reflective of today’s social media supported news.

His cabinet colleagues clearly recognize this. We winced at Treasury Secretary Steve Mnuchin’s comments in December that banks had “ample liquidity”. Stocks were very weak, largely because of problems caused by the government. The trifecta of growth –inhibiting tariffs, a looming federal government shutdown and Fed chair Powell’s communication missteps were the main cause (see Problems Made in DC Can Be Fixed There). But nobody had questioned banks’ liquidity until Mnuchin’s amateurish intervention.

Compared with the Goldman colleagues who preceded him, this betrayed the absence of a deft touch, and briefly raised more concerns than it settled. But it reflected the attention this administration pays to any substantive moves in equities.

President Clinton’s former campaign manager, James Carville, once commented that in his next life, “…I would like to come back as the bond market. You can intimidate everybody.” He also coined “The economy, stupid.” This phrase came to symbolize Clinton’s campaign singular focus and its improbable victory over George H. W. Bush.

GDP reports are too slow in providing feedback, so movements in the Dow offer more immediate information. Given the Tweets that follow when it reaches milestones (even if those milestones have been reached before), you can assume Trump badly wants to brag about the market going into next year’s election. Policies that are good for the economy must be good for stocks; therefore, when the Dow signals dismay, it’s likely to draw a reaction.

That doesn’t guarantee economic policies that will support stocks – the trade frictions with China are an example. But it does mean that there’s limited overall tolerance for pursuing policies that damage the market. The federal government shutdown lasted longer than expected.  It quickly ended, without the wall that was its purpose, once a major airport had to shut because of missing air traffic controllers. This likely won’t be repeated, and emergency action to build the wall will be tied up in the courts where it’ll be symbolic and harmless.

Trade friction is taking its toll. U.S. objectives are broad but not specific. We are approaching March 2nd, when the U.S. is set to impose additional import taxes on $200 billion of Chinese exports. As the deadline nears, expect Trump to find a way to claim victory and avoid the inevitable market swoon that would otherwise follow.

For years, the ‘Greenspan Put’ provided investors some comfort that the Fed would rescue them from economic weakness. Much of what moves stocks today emanates in Washington DC. As attention turns to the next presidential election, equity investors are likely to see the ‘Trump Put’ become the ultimate arbiter of what is administration policy.