A few weeks ago we wrote Why Oil Could Be Higher for Longer, and since then it has elicited quite a few comments back to us from clients and blog subscribers. We won’t repeat it in detail here since readers can simply click on the link above to see it. But our view is that the outlook for U.S. crude production over the intermediate term is very constructive, and certainly better than current consensus. This relates to the superior economics of shale wells compared to conventional drilling, and the associated ability of shale Exploration and Production (E&P) companies to quickly respond to changing prices by adjusting drilling activity faster than their peers.

“Shale wells,” (i.e horizontal wells drilled into source rock and stimulated by fracking) have many competitive advantages over conventional wells that give us confidence American production of Oil, Natural Gas Liquids (NGLs), and Natural Gas will greatly exceed consensus expectations to meet new energy demand and fill the void left by depleting fields.

A recent article in the Financial Times expanded on this theme (U.S. shale is lowest-cost oil prospect). A chart accompanying the article showed the break-evens of twenty potential future projects and the cheapest half-dozen are U.S. shale plays. In fact, shale oil development benefits from many of the advantages that are inherent in the U.S. Most Americans take for granted that property ownership comes with mineral rights for anything found below their property, but around the world this is by far the exception. In most countries mineral rights belong to the government. Getting a farmer to agree to allow drilling on his land is easier if he’s able to negotiate a monthly royalty check as opposed to a central authority simply exercising its control. 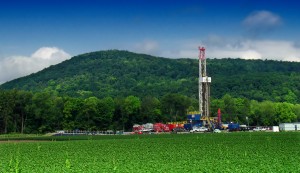 Although many of the cheaper sources of new oil are U.S. shale, Wood Mackenzie doesn’t believe there’s enough to satisfy the world’s consumption at current prices. Depletion of existing fields plus new demand create a need for roughly 6MMBD (million barrels a day) of additional supply annually. The market will clear at the marginal cost of the most expensive barrel needed to balance the market – a price that looks a good bit higher than today’s spot price. And for those who think offshore drilling can be attractive, BP just announced the final charge of $5.2BN for the 2010 Deepwater Horizon spill in the Gulf of Mexico. Their total costs for this one incident add up to $61.6BN, a hit only a few global companies could absorb. You can be sure that any offshore drilling in U.S. continental waters has to account for this possibility in its risk analysis.

Critically, low-cost U.S shale wells can be drilled much more quickly and come on with significantly higher initial production (IP) rates with steep decline curves.  In fact, a new shale well can go from planning to full capital payback before most new conventional  projects are even producing.  This fast decline rate also allows shale oil producers to hedge the bulk of their production, which occurs in the first several years, in the futures market which is only liquid for a few years out.  It’s worth noting that the quicker the payback the quicker shale E&Ps can plowback cash into new shale drilling. The chart below from the U.S. Energy Information Agency highlights how IP rates have improved over the past few years (click on image to expand). 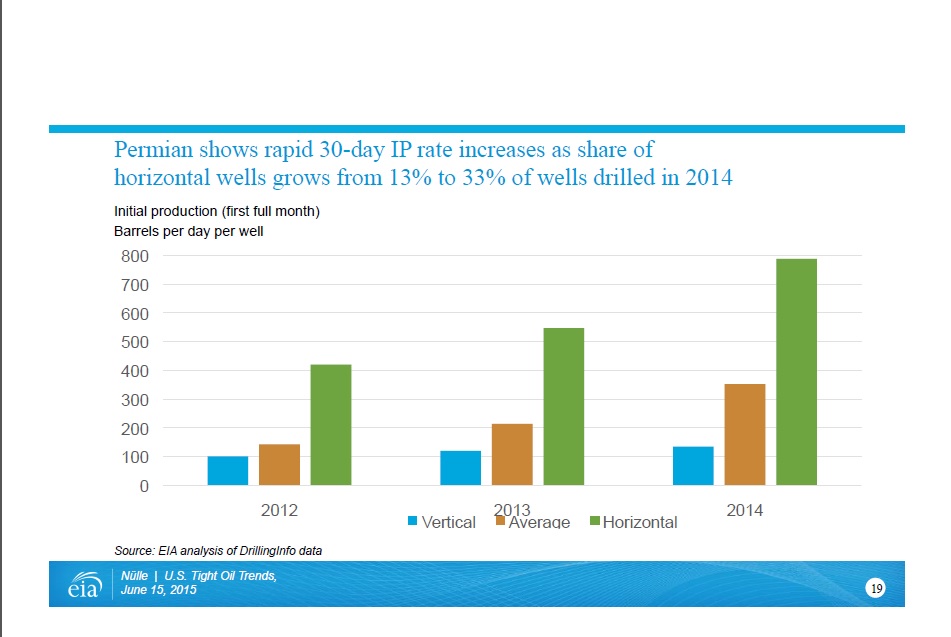 Geographically, the U.S. is blessed with generally sufficient water supplies close enough to the shale plays that they support, since fracking requires a lot of water. Entrepreneurial drive is as strong a force in America as anywhere, and that combined with highly developed capital markets make access to financing and substantial wealth accumulation possible for those who are able to profitably exploit this resource. And continued technological innovation spurred by entrepreneurs is relentlessly driving costs down faster than most expected and faster than conventional plays, further increasing their competitive cost advantages, playing to another American strength.

Even with all the American advantages and helped by the tailwind of high commodity prices it still took a decade for shale drilling to have a meaningful impact on output. Major shale drilling anywhere outside the U.S is a long way off, providing a huge first mover advantage.

In other words, the shale revolution is occurring because of all these inherent strengths in the U.S. On top of which, energy independence which is where we’re heading as a result, is in our national interest and highly likely to remain that way. The entire story is built on U.S. advantages and oriented towards U.S. interests. From a strategic perspective, given what we know today, it seems to us that perhaps the best secular investment theme available is the continuation of this trend, to the obvious benefit of the midstream infrastructure Master Limited Partnerships (MLPs) whose support is critical.

It’s no longer the case that a distribution cut is bad for an MLP. In April, Crestwood Equity Partners (CEQP) cut its distribution at the same time as announcing a JV with Con Edison and steps to reduce its leverage (see Crestwood Delevers and Soars). Last week Plains GP Holdings (PAGP) announced a simplified structure with its MLP Plains All America (PAA) and an 11% distribution cut at PAGP. Both stocks moved sharply higher on a perceived lower cost of capital and therefore improved growth prospects. Williams Companies (WMB) is likely to cut its dividend so as to reduce leverage, but at a 12% yield there can be few who would be surprised by this. A distribution cut in support of a stronger balance sheet seems to attract more buyers than sellers nowadays. 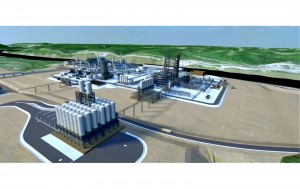 Lastly, we note that Shell Chemicals is investing $6BN in a new ethylene facility in SW Pennsylvania near Pittsburgh (artist’s impression from Shell at left). It’s located there to be close to its supply of ethane in the Marcellus and Utica shale areas, of which it expects to consume 90-100 thousand barrels a day. The facility will in turn produce 1.5 million tonnes per annum (MTPA) of ethylene and 1.6 MTPA of polyethylene, widely used in everything from food packaging to automotive components. This is not a region that has seen a new large industrial project such as this in living memory. It’s another example of the tangible results of the shale revolution.

We are invested in CEQP, PAGP and WMB