Last week the Financial Times wrote about the dwindling conviction of believers in the Shale Revolution (see Why US energy investors are experiencing a crisis of faith). Religion is an appropriate metaphor – secular values such as Enterprise Value to EBITDA or forward free cash flow yield have offered scant protection. To invest in energy today is to be a Christian thrown into Rome’s Coliseum.

In January Blackstone Infrastructure Partners (BIP), invested $3.3BN for a controlling interest in Tallgrass Energy (TGE) which, following a simplification of its GP/MLP structure left Blackstone owning 44% of the company. On Tuesday night TGE disclosed a take-private offer from BIP for the rest of TGE. It’s a measure of how poorly TGE’s stock has performed that buying the remaining 56% would cost $200MM less than BIP’s original investment even after the 35% premium embedded in the proposal.

The good news came with a sour taste. A previously agreed sideletter between BIP and TGE came to light revealing a sweetheart deal for management. In the event of a take-private transaction like this one, management can sell its shares at $26.25, not the $19.50 agreed for all the public investors. A cynic might conclude that TGE allowed uncertainty about their capex plans and recontracting on pipelines to weigh on the stock price, inviting BIP to acquire the balance below their earlier deal price while paying insiders 35% more. Energy sector executives provide ample material for critics who see scant evidence of a fiduciary mindset.

Returning to negative sentiment, retail investors struggle with the failure of growing oil and gas production to lift the prices of midstream energy infrastructure, with its toll-model supposedly fairly insulated from commodity prices. Public market valuations differ from where private equity sees things. It turns out  BIP is also puzzled but happy to exploit the opportunity.

Today ENLC’s market cap has sunk to $3.6BN, creating a paper loss for GIP of almost $1.7BN. Former CEO Barry Davis returned, replacing Mike Garberding who had been promoted from CFO less than a year earlier. It’s not just retail investors who have bought into undervalued pipeline stocks too soon.

Goldman Sachs recently noted that around $250BN in private equity “dry powder” is dedicated to infrastructure and natural resources. It won’t all find its way into the U.S. pipeline sector, but the American Energy Independence Index, which broadly reflects the sector, now has a market cap of around $450BN. The float-adjusted figure, removing shares held by management that don’t trade, is $372BN. GIP is raising a fourth fund targeting $17.5BN, undeterred by the paper loss GIP III has taken on ENLC. 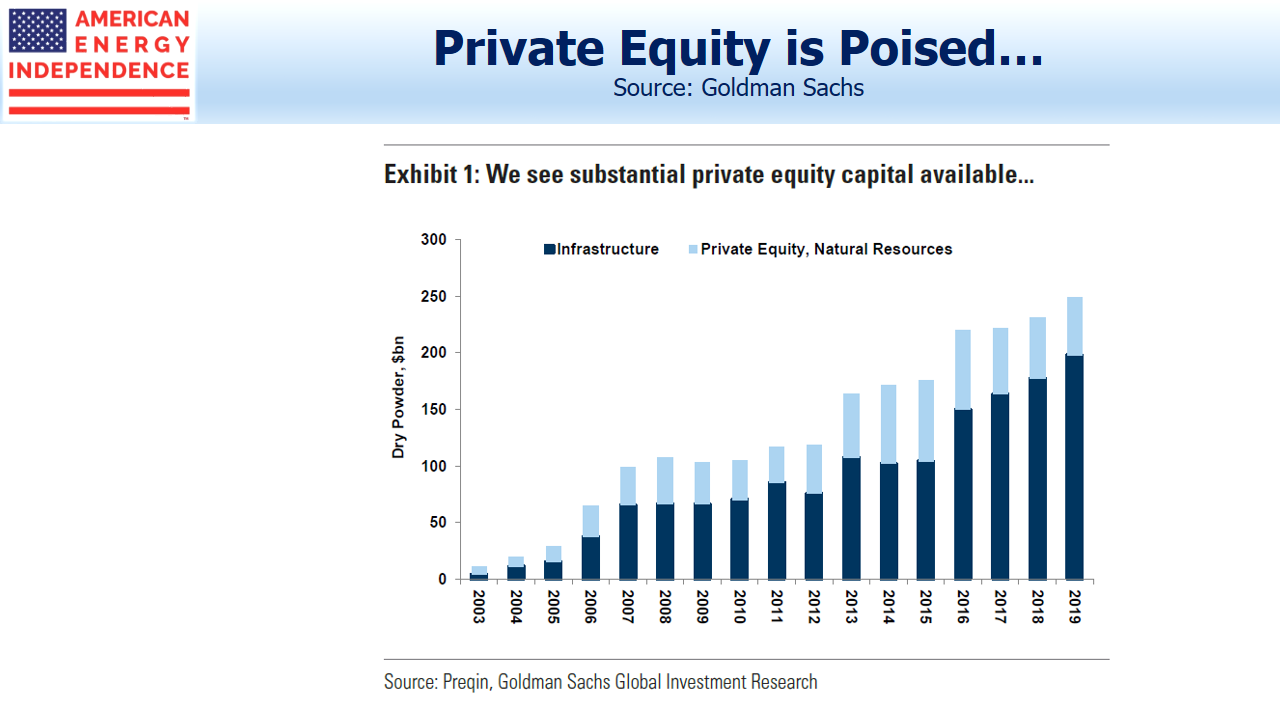 The end of August marked the five year anniversary of the peak in the Alerian MLP Index. It remains 39% off its high. Hinds Howard, who follows the sector for CBRE Clarion Securities, notes more than 80 constituents have been removed from the index. MLPs have steadily become less representative of midstream energy infrastructure. The Alerian MLP Index (AMZ) has a market cap of around $250BN ($150BN float-adjusted).

The FT article blamed the slump in part on poor spending discipline. By way of confirmation, PDC Energy’s (PDCE) recently announced acquisition of SRC Energy (SRCI) anticipates annual savings of $50MM in General and Administrative (G&A) expense. Considering SRC’s entire G&A was $39MM last year and the company’s market cap is $1.1BN, this is not a company with a parsimonious culture towards corporate overhead. Both stocks rose on the news.

Investors want further consolidation in the energy sector, including midstream. There are more senior energy executives than we need.

We are invested in ENLC and TGE.