Last year the U.S. set a new world record for annual increase in production of oil and gas by any country in history. The recently-released BP Statistical Review of World Energy 2019 highlights these and many other useful facts. 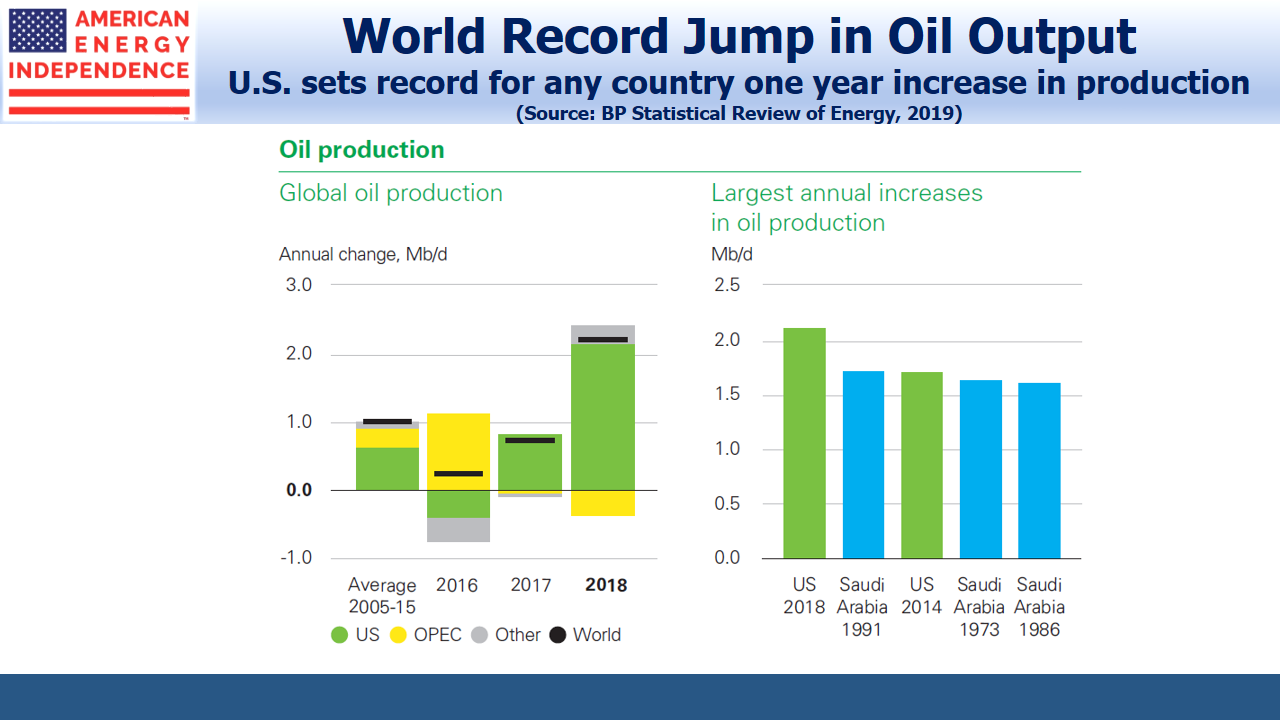 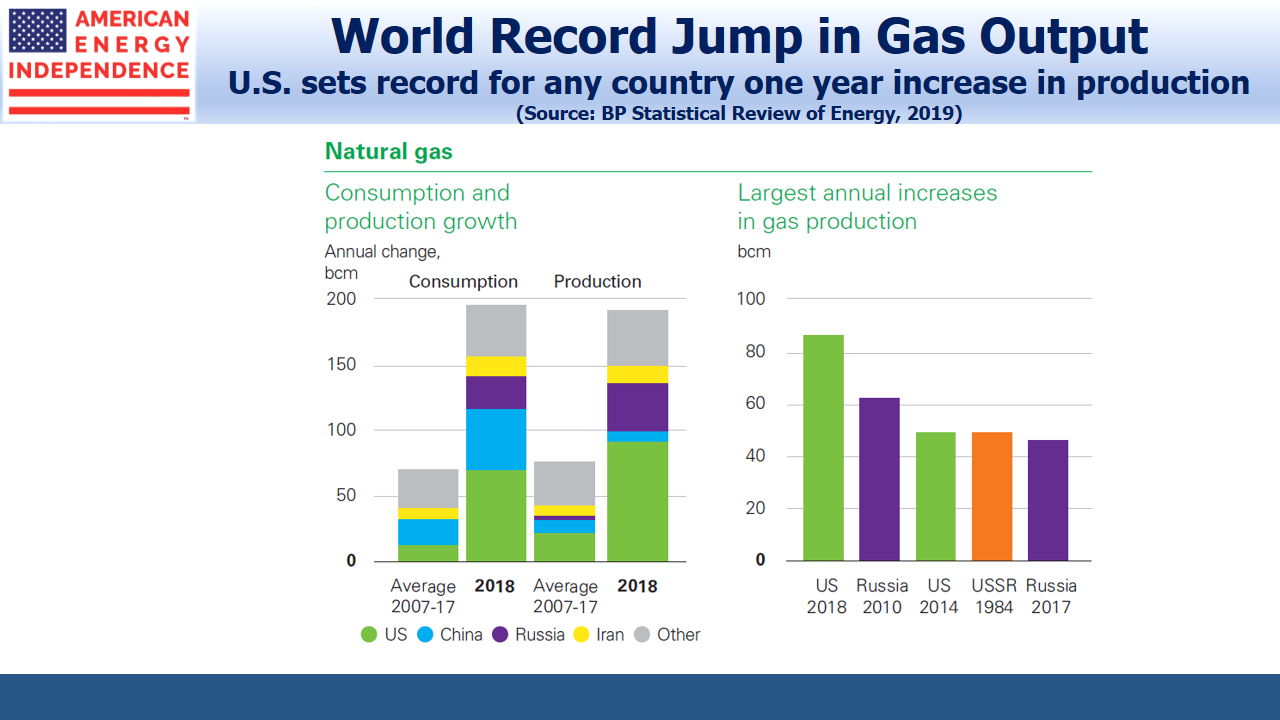 Total U.S. energy consumption rose by 3.5% last year, the fastest in 30 years and a surprising jump following a decade of no growth. Growth in population and GDP have normally been offset by lower energy intensity and improving efficiency. But periods of extreme weather (both excessive heat and cold) boosted energy demand, as well increased use of ethane for America’s resurgent petrochemicals industry. 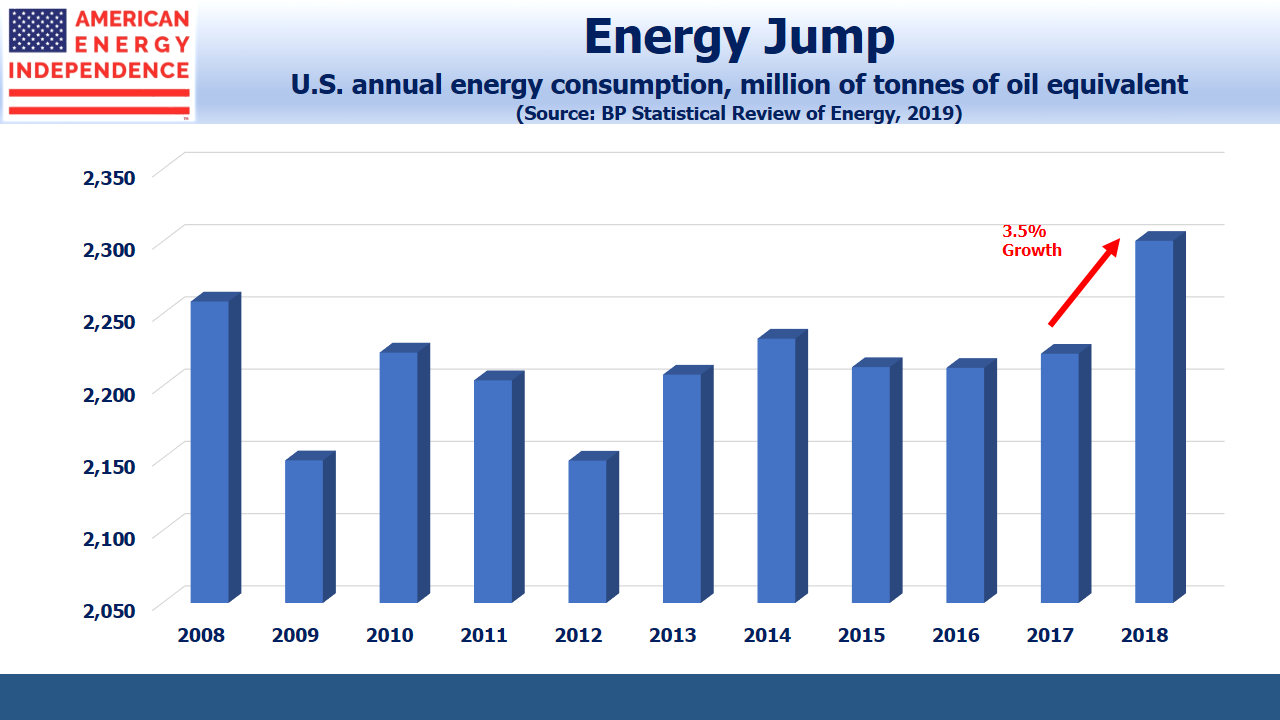 The U.S. was one fifth of the 2018 increase in global energy consumption, with China and India together representing half. Climate change and CO2 emissions figured prominently in the report. Developed countries desire lower emissions and emerging countries higher living standards. China consumes 42% more energy than the U.S., a gap that will grow in the decades ahead. The resolution of these conflicting goals dominates the outcome. 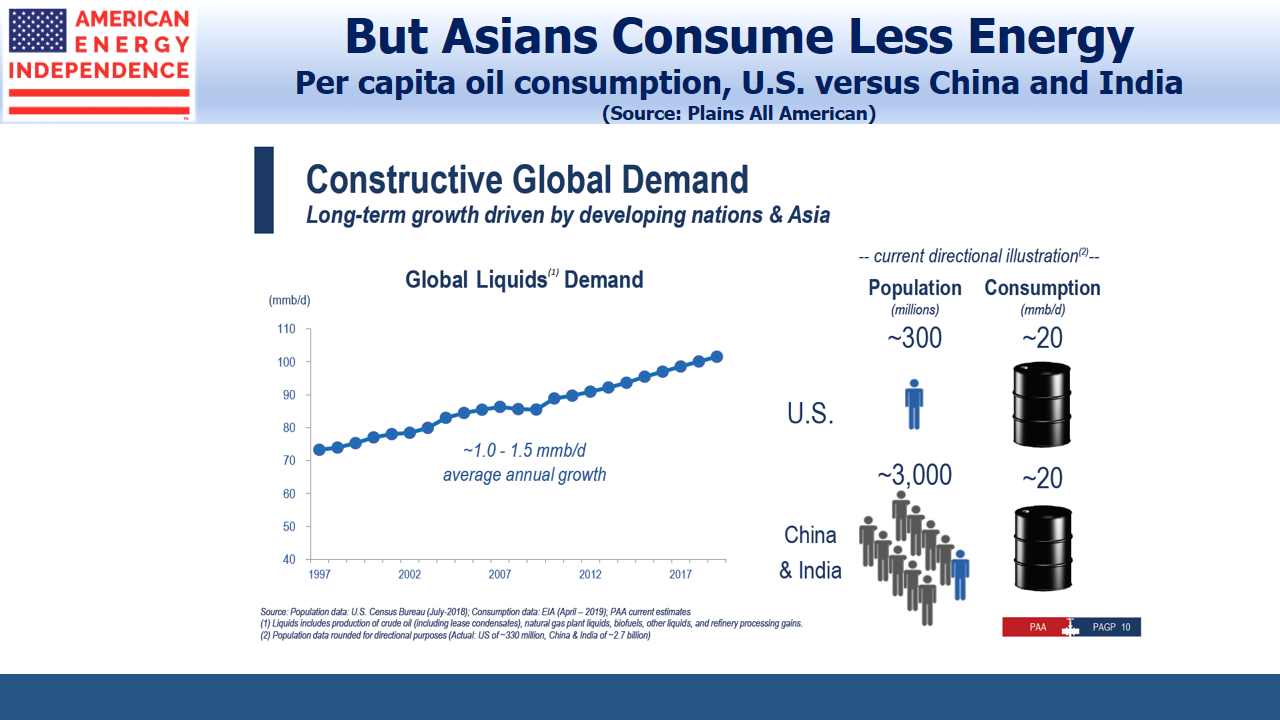 So it’s worth noting that the Asia-Pacific region energy consumption is more than double North America’s, and half of this comes from coal. The difference in coal volumes is by a factor of 8X. China alone consumes 6X as much coal as the U.S. But to illustrate unmet energy demand, China and India’s per capita consumption of crude oil is only 10% that of the U.S. 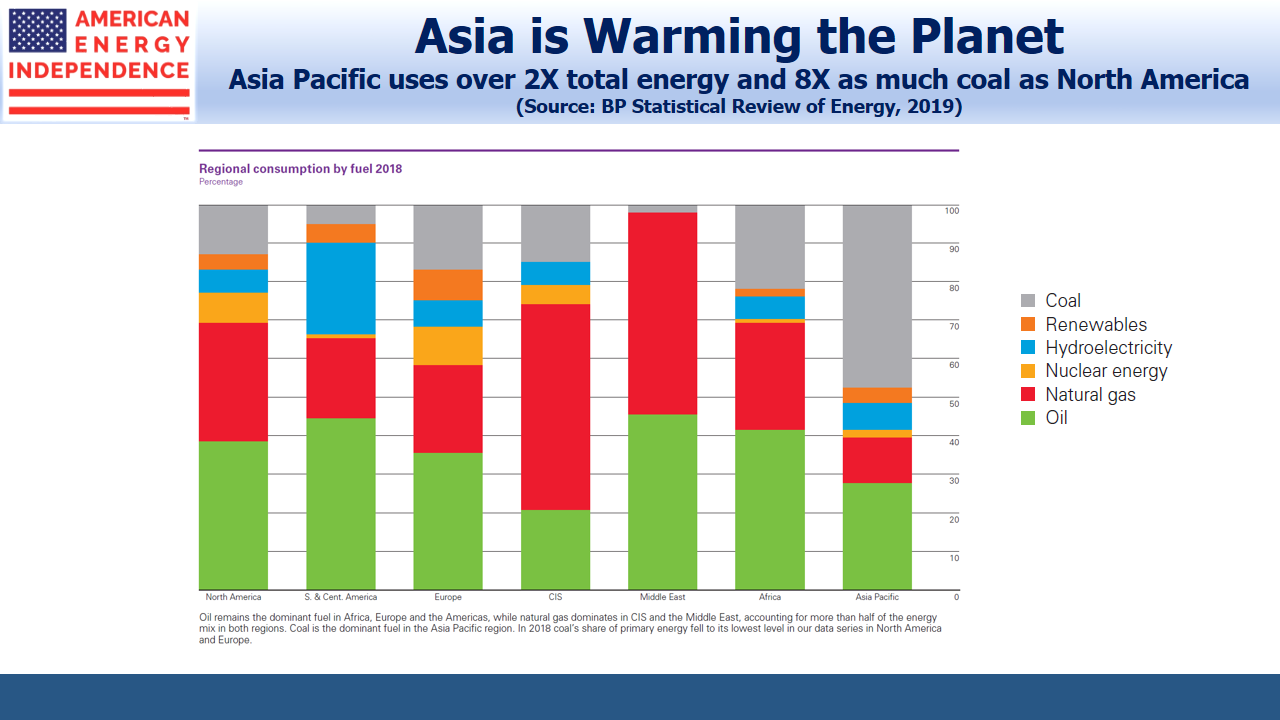 Until we confront these twin issues, little else that’s done to reduce emissions will have much impact.

Global carbon emissions grew by 600 million tons, or around 2%, the fastest for many years. This is the equivalent of increasing the global passenger car fleet by a third. Last week, India’s Adani Mining won Australian regulatory approval to begin developing one of the world’s largest untapped coalmines. Its critics contend that this project alone will eventually add 700 million tons of CO2 emissions, exceeding last year’s global increase from all sources. This is where India’s desire for more energy to raise living standards manifests itself. New York’s environmental extremists opposing a new natural gas pipeline might consider where the real problem lies.

Increased use of renewables alone will not solve the issues of climate change. BP notes that simply maintaining carbon emissions from the power sector at 2015 levels would have required growth in renewables generation at more than double the actual rate. The additional output is equal to all of the U.S. and China’s 2018 energy output from renewables. 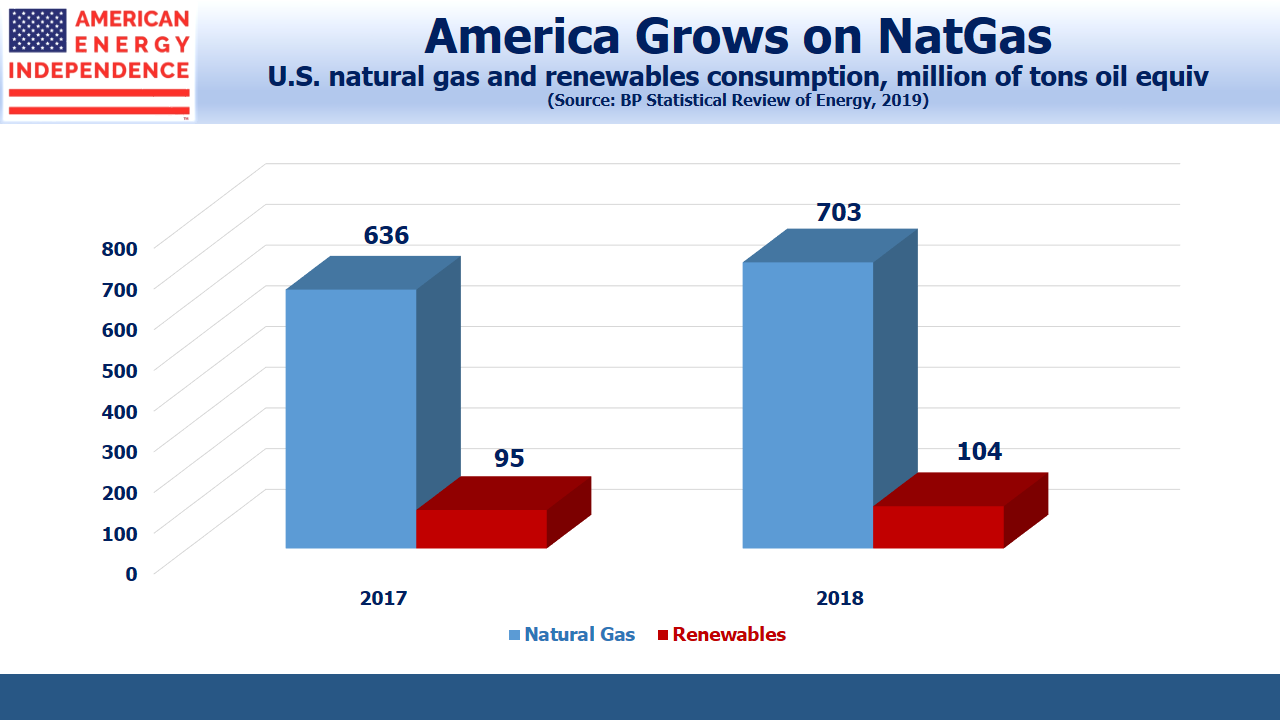 Natural gas provided 43% of the additional power the world consumed, more than twice that provided by renewables. For all the excitement about increasing use of solar and wind, their share rose by 1.4%. 84.7% of the world’s energy came from fossil fuels in 2018, versus 85.1% in 2017. As Bill Gates and others have pointed out, R&D should be directed towards making the 85% less carbon intensive, rather than trying to replace what obviously works.

Netpower is developing the ability to generate electricity from natural gas with no emissions, which would represent a significant breakthrough if successful.

It’s still possible to find writers warning of a production collapse because of shale’s chronic unprofitability.  An article on Seeking Alpha (see Here’s Why Oil Stocks Are Priced For Armageddon) or Bethany Mclean’s Saudi America: The Truth About Fracking and How It’s Changing the World both reflect a simplistic view. Exxon Mobil (XOM), now the biggest driller in the Permian, clearly finds it profitable. Anadarko had two suitors for its Permian assets. Volumes keep growing, in defiance of some writers’ claims to better understand the economics. 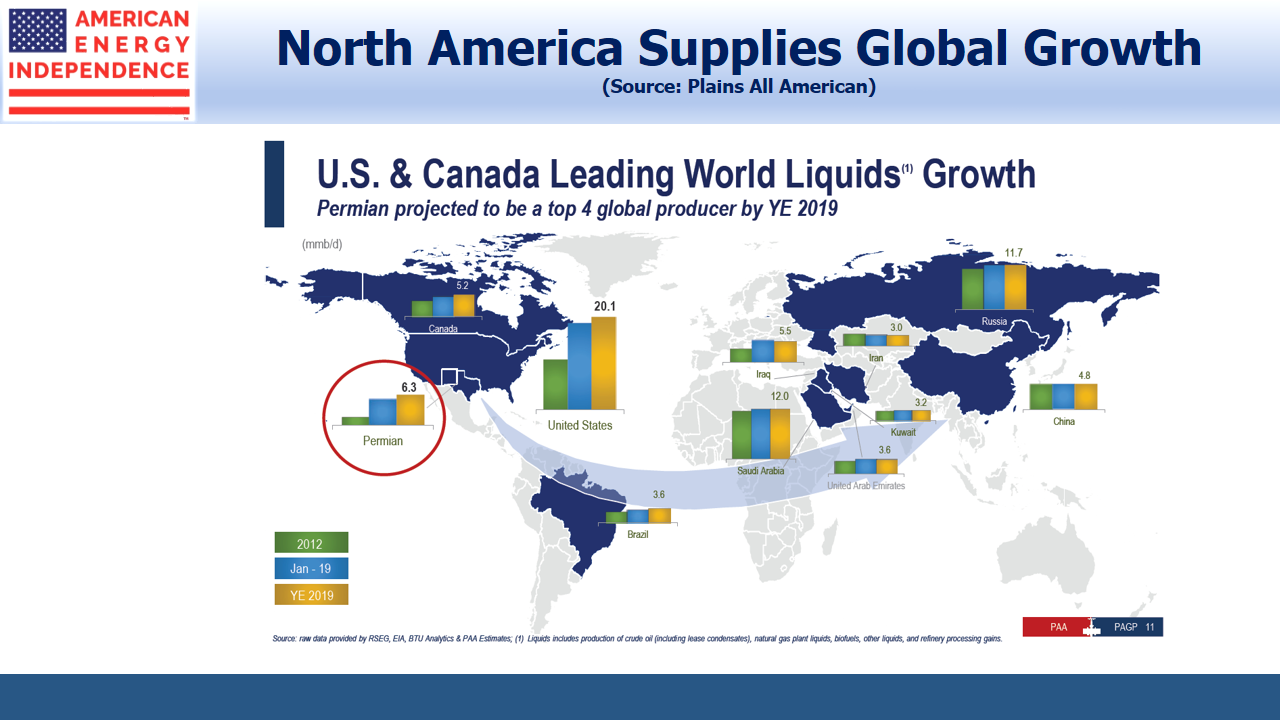 BP’s report showed that the 2.2 Million Barrels per Day (MMB/D) of increased global crude oil production came from the U.S., a point echoed in Plains All American’s (PAA) Investor Day.

The path to lower global emissions requires far more use of nuclear power, far less coal use in China and India, and more R&D into using existing energy sources more efficiently. Otherwise, investments in seawalls and flood mitigation will be a safer bet.

We are invested in PAA, via Plains GP Holdings.