Sunday’s blog (see Pipeline Opponents Help Free Cash Flow) drew some interesting feedback. It seems odd to favor constrained growth opportunities, and it’s contrary to how most management teams will assess their outlook. But for many pipeline investors, including your blogger, the pre-Shale years of steady returns were what made the sector attractive. Anti-fossil fuel activists refuse to acknowledge how the world works, but they are making new pipelines cost-prohibitive, just as nuclear opposition has done for that source of power.

Investors have asked about the prospects for the Dakota Access Pipeline, DAPL (listen to Judicial Over-Reach on the Dakota Access Pipeline). Judge Boasberg ruled that DAPL should shut down, and allowed only 30 days for it to be emptied of crude oil even though the owners argued that was too little time. Once shut down, there is a real question as to whether it will ever re-open. Since the pipeline is built and in use, you’d think shutting it would require extraordinary circumstances.

Yesterday evening, a U.S. Appeals Court granted an administrative stay while it considers whether the line, long opposed by local tribes and environmental activists, should be shut.

In this case, the government has been found to have incorrectly issued the permit allowing it to be built. Ludicrous analogies are easily constructed – if you can’t safely build with government approval in hand, nothing much could get done in this country. The courts will decide if Judge Boasberg is correct on the law, but if he is it means the law is wrong and needs to be fixed. We think this is a unique case, and that existing pipelines are not at risk of being shut down.

Even if the shut-down order is ultimately overturned, the Army Corp of Engineers has been told to carry out a more robust environmental study than was originally done. Although the Trump administration could appeal this requirement, it appears that there is insufficient time to do so before the election. One of Trump’s first acts following his inauguration was to direct the Army Corp of Engineers to issue the necessary permit. That legal challenges have outlasted the term of this administration with DAPL’s prospects still not resolved further highlights the challenges of new projects.

Investors have to consider the possibility of a Biden victory, which will lead to a changed emphasis towards climate change in the White House. In this scenario, DAPL’s prospects would be unclear. If it’s been shut down pending a revised environmental study, it may never re-open. The hit to Energy Transfer (ET) is around 3.5% of EBITDA, which we think is already priced in.

Although Biden is calling for $2 trillion to be spent on clean energy, Covid is causing a ballooning Federal budget deficit, currently $2.7 trillion with three months of the fiscal year remaining. As a % of GDP we’re approaching World War II levels. Being better prepared for another pandemic is likely to be more important than in the past, so cheap, plentiful domestic natural gas will continue to gain market share in providing energy to Americans. It’s confidence in this future that underpinned Berkshire recent acquisition of Dominion’s pipeline and storage assets. 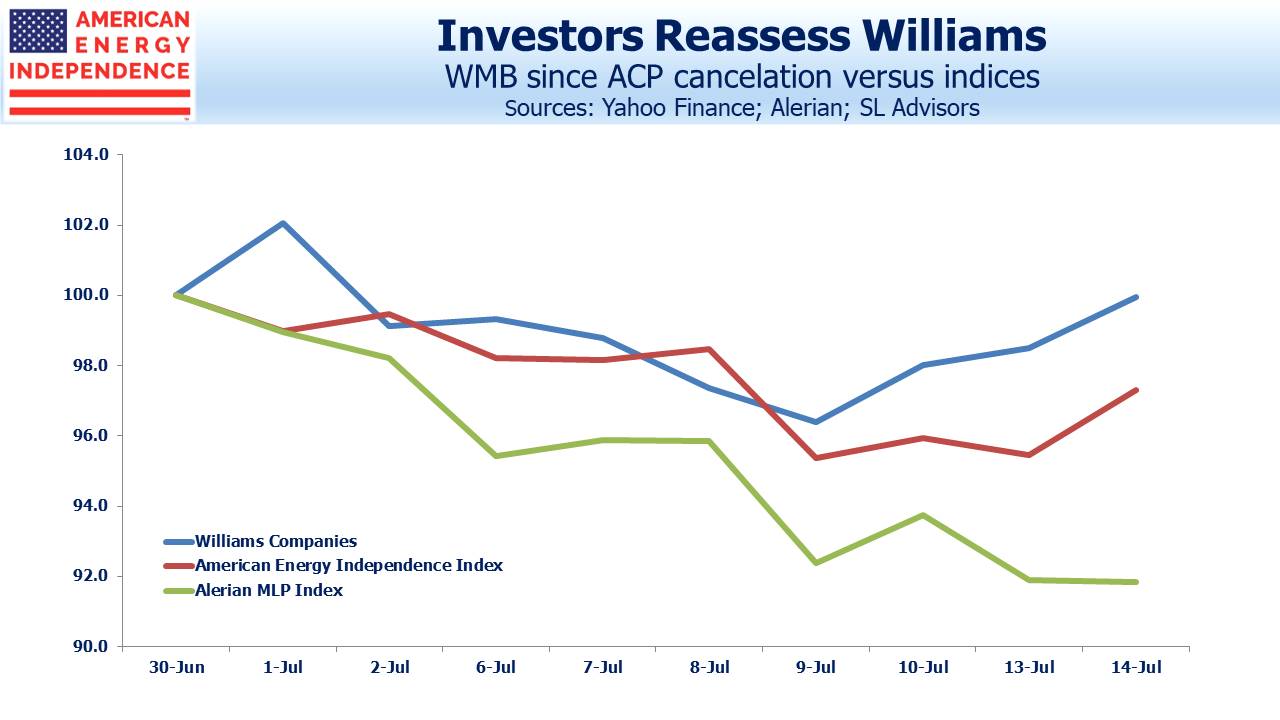 Meanwhile, existing pipelines are more valuable. Dominion and Duke Energy abandoned their Atlantic Coast Pipeline (ACP) even though they had successfully fended off legal challenges and had plenty of customer commitments. So Transco, owned by Williams Companies (WMB) and operating from Texas to New York, is well positioned to meet some of this unsatisfied demand. They may even find a way to bring Appalachian natural gas to customers in North Carolina by building on to their existing network. They’ll have no competition.

Since the ACP cancelation WMB has outperformed the sector, as defined by the broad-based American Energy Independence Index. Both have outperformed the Alerian MLP Index, since investors continue to avoid concentrated MLP exposure.

We are invested in ET and WMB.