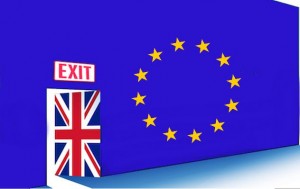 It’s been 34 years since I left the UK and moved to the U.S., and 25 years since I became a U.S. citizen. I long ago lost the right to vote in UK elections, having by now spent two thirds of my life in the New World. But I shall never lose my pride at growing up English nor my intense interest in what’s happening there.
So I have followed the Brexit vote avidly. It has been described as a struggle between the head, which rationally questions how the UK’s economic prospects can be better with the uncertainty of leaving, and the heart, which laments the loss of sovereignty which EU membership demands. Had I voted, my head would have won and I would have checked the “Remain” box, but I have friends on both sides of this highly divisive issue and I can appreciate the frustrations of the majority. Meanwhile, the EU faces another existential crisis.

U.S. citizens are often aghast to learn of the rules agreed to by successive UK governments in order to be an EU member.  The British tabloid press routinely shouts about un-elected bureaucrats in Brussels imposing ridiculous standards of conformity, apparently to promote a more competitive EU-wide market, Many are untrue and some apocryphal, but bananas and cucumbers (to cite just one example) are subject to EU standards on size and curvature. One struggles to comprehend the mindset behind these or the motivation of those who toil to make such rules. I recently heard that EU horseshoes have certain size requirements, which causes at least one UK blacksmith to painstakingly heat and reshape the ones he buys before they’ll fit local horses. Although I couldn’t independently confirm this story, there have been enough similar instances to cause millions of Britons to roll their eyes.

But the major issue was immigration, and an enlarging EU burdened with permanently slow growth because of its catastrophic embrace of the Euro has seen increasing numbers of its citizens migrate north-west to the UK’s more vibrant economy and job market. EU membership requires free movement of EU citizens within EU borders, and an island nation that has repelled European invaders for many centuries was never going to sit comfortably with this. When I was growing up, a vacation in Italy was described as “going to Europe” or to “the Continent”. “Fog in English Channel — Continent Cut Off”  is thought to be a newspaper headline from my grandparents’ time. Whether it actually existed or not, the sentiments it represents did, and in some cases perhaps remain today.

If George Soros and other speculators had not demonstrated so spectacularly in 1992 that the British Pound could not stay linked to the Deutsche Mark, the UK might have subsequently joined the Euro, and by now be suffering similarly slow growth with the rest of the Eurozone. It would at least have deterred some immigration. But Britain has always been more ambivalent about the EU than its founding members. The welcoming of over one million refugees into Germany last year, while a huge and selfless act by Germans, rendered UK PM David Cameron’s promises to limit immigration both more vital and less credible.

When a country eschews tangible economic results such as GDP growth and job creation in favor of intangibles like a feeling of greater sovereignty, investors must acknowledge that the pursuit of corporate profits is not everyone’s priority. While it’s foolish to infer anything about the U.S. election, free trade isn’t as important to as many people as establishment politicians might hope. Populism is a force in other  countries including the U.S. The benefits of open markets are broad but not uniformly distributed, and the less economically fortunate are finding their voice.

The vote split sharply along regional lines, with London, Scotland and Northern Ireland voting to Remain while most of the rest of England chose Leave. Now a second Scottish independence referendum is likely and it may see the union of 1707 dissolved, while Northern Ireland may be reunited with the Irish Republic. A diminished Britain reduced to England and Wales may seek to deepen its economic ties with the U.S.; London to New York is 3,500 miles, 1,000 miles more than Los Angeles to Hawaii. Or the UK may have second thoughts about Brexit, since the economic pain is likely to occur far sooner than freedom from EU rules. A second EU member could also leave — the Netherlands may hold their own referendum. There are many possibilities and few certainties. Nobody can really be sure how events will unfold.

There was also a generational divide, with younger voters less bothered by immigration and enamored of their EU-wide mobility while older voters reflected nostalgia for the Greater, more ethnically Anglo-Saxon, Britain  of old. Because of the propensity of seniors to choose Brexit, a meaningful portion of the 3.8% margin of victory will have passed on before the UK finally negotiates its exit. Consider this quote from one young voter: “Freedom of movement was taken away by our parents, uncles, and grandparents in a parting blow to a generation that was already drowning in the debts of our predecessors.” U.S. baby-boomers are also leaving an unwelcome legacy of debts to cover their un-financed retirement healthcare (Medicare). Different generations are steadily finding theirs interests no longer aligned.

Brexit’s economic impact will affect the UK economy substantially with some forecasting an immediate recession because of the uncertainty. Any long term investment decision confronts acutely difficult assumptions. But if it’s bad for the UK it must be worse for the Eurozone. At least the UK knows where it’s going if not exactly how it’ll get there. Many other EU countries know neither, which is why Eurozone stock markets fell substantially more than the UK’s FTSE. Brexit is far from being just a UK problem. The Euro really didn’t need this.

Nonetheless, life will go on. Consumers will buy what they need and energy will be produced and used. Low volatility stocks will remain that way, relative to the S&P 500 at any rate, and U.S. energy infrastructure is, thankfully, over here rather than over there. Not immune to the turmoil voters have unleashed, but only tangentially impacted.

UK voters have finally tired of an EU that delivers edicts and fiscal austerity. While I wouldn’t have voted to Leave, I am deeply proud of this small but highly consequential nation that has the self confidence to abandon the certainty of a dysfunctional club so as to take back control of its future, uncertain though it may be.

Why Oil Could Be Higher for Longer Will Energy Transfer Act with Integrity?
Scroll to top