In February, following our criticism of Kinder Morgan’s (KMI) return on invested capital (see Kinder Morgan’s Slick Numeracy) the company, to their credit, reached out to us so as to better present their perspective. Our point was that capital allocation decisions in recent years had not always been accretive to equity. We offered the company an opportunity to write a rebuttal which we promised to publish, unedited, but they declined. So we summarized their response (see Kinder Morgan Responds to our Recent Criticism).

Not long after, Covid dominated the news, and historic returns on invested capital took a backseat to gauging current demand destruction. KMI’s stock sank from $21 to under $10, before recovering roughly halfway to $14.

KMI kicked off earnings reports for the sector last week. We were most interested in their outlook, but also in their planned growth capex. Industry-wide spending reductions are driving improved profitability (see Pipeline Cash Flows Will Still Double This Year).

KMI announced a $1BN goodwill writedown on natural gas gathering and processing assets previously acquired. Although a non-cash expense, this is an example of capital deployed whose cash generation will no longer meet its target. KMI will blame Covid, but nonetheless it’s a loss for shareholders.

The company confirmed guidance of $1.7BN in “expansion opportunities” (we winced) for 2020. This is well below their prior range of $2-3BN annually over the next decade, as initially communicated in April during the depths of lost production. Several questions followed on the earnings call – in response to Shneur Gershuni of UBS,  CEO Steve Kean allowed that future capex, “looks like it hangs around the level we’re seeing in 2020, maybe a little less.”

This cheered us, and later JPMorgan’s Jeremy Tonet asked, “…is there a scenario where 2021, or maybe in 2022, where growth CapEx could be as low as $1 billion?” We were left positively giddy when Steve Kean replied, “We’re close, yes. We’re close.”

When it comes to pipeline company growth capex plans, they share the qualities of an overly vigorous golf swing – less is more. 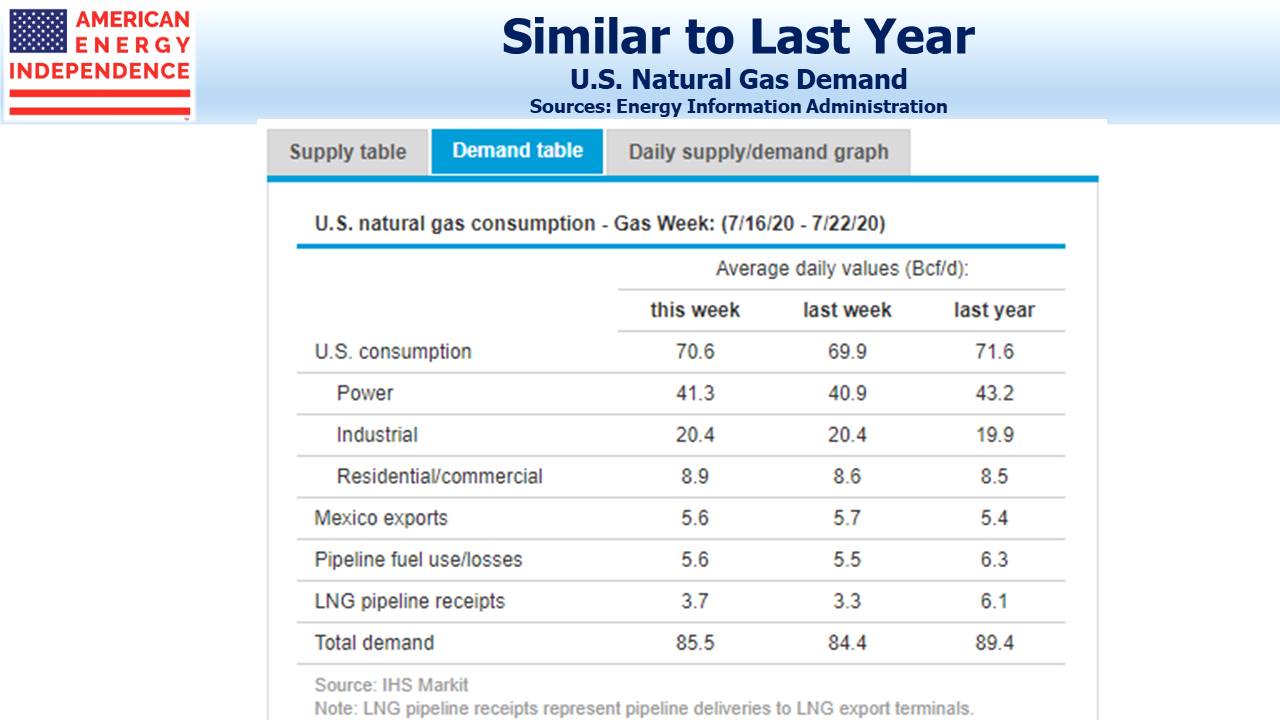 KMI’s adjusted EBITDA came in at $1,568MM versus expectations of $1,634MM. They also lowered full year DCF to 11% below budget (was previously 10% below). They still plan to increase their dividend to  $1.25 annually, which would yield over 8.5% at the current stock price. They expect to reach 4.5X Debt/EBITDA although conceded 4.7X is their likely year-end level.  They also pushed back the date at which they expect to be a corporate taxpayer to 2026.

Meanwhile, domestic production is recovering along with demand. In recent weeks, oil production has risen from 9.7 Million Barrels per Day (MMB/D) to 10.9 MMB/D, and the industry now expects it to settle in around 11 MMB/D. That’s still well below the pre-Covid level, which was on track to hit 13 MMB/D by year’s end. But it’s improving. “It’s a slow, slow recovery, but it’s happening,” said Alexandre Ramos-Peon, a senior analyst at Rystad Energy, a consultancy.

Natural gas demand of 85.5 Billion Cubic Feet per Day (BCF/D) remains close to a year ago of 89.4 BCF/D, exhibiting very little response to Covid. LNG exports of 3.7BCF/D are down by 2.4 BCF/D, representing more than half the drop as global LNG demand has softened somewhat. Overall, the market hasn’t registered much impact.

Pipeline stocks such as KMI have dividend yields that reflect considerable market skepticism regarding their longevity. Bond investors harbor few doubts, as we noted recently in comparing Enterprise Products Partners 30 year debt yields of around 3% with the almost 10% dividend yield (see Pipelines Are Becoming Less Risky). KMI just announced a 2050 maturity with a 3.25% coupon. The chasm between dividends and bond yields in this sector reflect rigid investor segmentation, and a misallocation of capital by fixed income buyers who would greatly benefit from the flexibility to incorporate some equity risk.

Earnings reports from other big pipeline companies over the next few weeks should provide confirmation of growing free cash flow and secure dividends.

We are invested in EPD, KMI and all the components of the American Energy Independence Index via the ETF that seeks to track its performance.