It’s Lonely At The Fed

A series of recent client meetings in south east Florida was good news in two respects – both as evidence that in-person meetings are slowly returning, and because people want an update on the new momentum sector, pipelines. Although in truth all these clients would have extended friendship at any and all times in the past.

Focused as we are on the cheapest sector in the market, one financial advisor revealed that many of his clients are nervous. Stocks look expensive, and bonds more so. Very little seems to offer an attractive long-term return versus risk, although plenty of quick trades are there for the opportunistic. 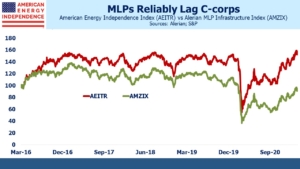 It’s a year since the American Energy Independence Index (AEITR) and other MLP indices made their low. At least closed end funds, one of the causes, destroyed enough capital to lose any future potency (see MLP Closed End Funds – Masters Of Value Destruction). The rebound since then has been breathtaking, with the AEITR returning 182% since March 18, 2020. 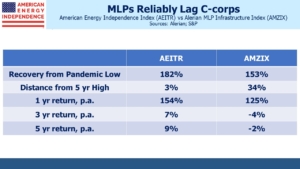 Even the perennially lagging Alerian MLP Infrastructure Index (AMZIX), tracked by the much-maligned Alerian MLP ETF, has rebounded 153% from its low. The superior return from c-corps versus MLPs is increasingly apparent, since the AEITR (80% c-corps/20% MLPs) is ahead of AMZIX (100% MLPs) over the past one, three and five years. Investors have spoken. 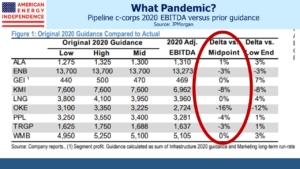 It’s increasingly clear that the March 2020 collapse was an aberration. Most of the biggest pipeline corporations reported 2020 full year EBITDA close to guidance they provided before the pandemic. These businesses are more stable than last year’s sellers. 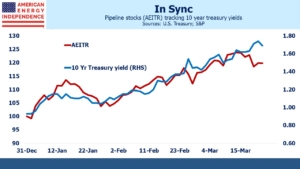 Some clients are feeling concerned about inflation, although not yet making wholesale portfolio changes. Investments that offer protection are few – on this score, pipelines that are tracking the ten-year year yield higher are one of the better ones. For now it’s the reflation trade, but it may transpose into the inflation trade later this year. 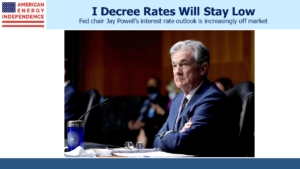 Fed chair Jay Powell is increasingly alone with his equanimity about the inflation outlook. On Monday the National Association for Business Economics (NABE) released their Economic Policy Survey which revealed that almost half the NABE panelists expect the Fed to hike rates next year. A majority sees elevated inflation risk.

Eurodollar futures are more reflective of the NABE outlook than the Fed’s, demonstrating investors’ scant regard for the Fed’s forecasting ability. Jay Powell’s repeated assertions that higher inflation will be temporary and not of concern reflect growing frustration with the market’s dismissive response.

The Fed is simply one more forecaster, and not a good one. But their power over monetary policy is absolute. They can determine whether December 2022 eurodollar futures incorrectly suggest a hike late next next year by holding short term rates steady indefinitely. However, a graceful exit from $120BN of monthly bond purchases becomes harder to envisage as yields move steadily higher.

The ECB has responded to rising yields by increasing its bond purchases. The Fed may yet do the same if they feel financial conditions are becoming too restrictive. This starts to look like a central bank defending a currency peg – usually doomed to failure, except that in this case the analogous effort is to prevent the currency going too high.

It therefore seems unwise to expect interest rates to move higher than the Fed wants (although they may). It’s more sensible to bet on inflation staying higher than they would like. The Fed can’t control inflation, and their efforts to buy the bond market’s silence mean inflation will go higher than it otherwise would.

Right on cue, news leaked of the White House plan to launch a $4 trillion infrastructure/climate change/jobs initiative. This should dispel any lingering doubts that MMT is government policy. If you need further convincing, check out Stephanie Kelton’s The Deficit Myth, the playbook on current fiscal policy. We reviewed it here.

With fiscal and monetary policy synchronized to produce inflation, this is the path of least resistance. Inflation-sensitive assets, of which energy pipelines are a good example, are becoming indispensable to everyone’s portfolio.