Climate Extremists Are Losing By Winning

For years environmental extremists have campaigned with increasing success for less investment in fossil fuels. The logic has been that as CO2-emitting sources of energy become harder to access and more expensive, the world would increasingly turn to renewables. Confronting demand for energy has generally been eschewed in favor of targeting suppliers. It’s far easier to demonize a few hundred companies providing the reliable energy that billions of consumers want.

EU governments have been especially keen to increase their reliance on intermittent solar and wind. The combination of reduced supply of fossil fuels and increased use of renewables is the precise result energy policies have been seeking. 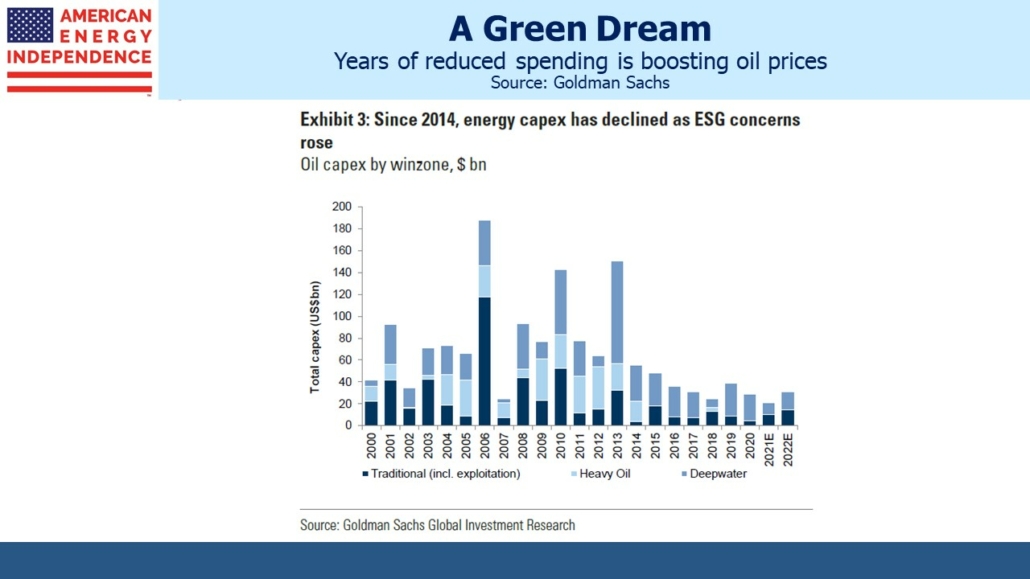 The success of this strategy is now delivering to European customers what should have been expected – sky high electricity prices combined with increased risk of supply interruption.

Unusually calm weather in the normally windy North Sea slashed windpower from the UK’s 11,000 turbines by 80%. Deprived of a source that generates more than 20% of its electricity, Britain turned to natural gas and coal (see The Cool North Sea Breeze Lifting US Coal). Europe’s production of natural gas has been in decline for years, even while consumption has been rising. Imports now account for 90% of the EU’s total.

With unfortunate timing, a key undersea electricity cable from France went down because of a fire at a converter station in SE England, giving UK wholesale electricity prices a further boost. Ireland, also coping with uncommonly calm winds, cut power it normally supplies to Scotland.

The result has been European natural gas prices four times the US benchmark, and wholesale electricity prices up by 8-10X from a year ago (see The Bull Market in Natural Gas). Europe-bound Liquified Natural Gas (LNG) shipments from the US have in some cases been diverted to Asia where prices are even higher.

Britain has even seen two fertilizer production facilities cease operations indefinitely, because of the high cost of natural gas, a key input. Although grain shortages as a result seem improbable, higher prices are likely.

Achieving the desired mix of increased renewables and reduced availability of natural gas has not generated the popular enthusiasm environmental extremists might have hoped. Consequent double digit increases in household electricity bills have commanded more attention from governments than celebrating progress in the energy transition.

Instead, the focus has been on protecting consumers from the high electricity prices climate change policies have wrought. Italian households have been warned to expect 40% higher electricity bills in the next quarter, following a 10% hike which would have been twice as big but for a €1.2BN subsidy from the Italian government. In Spain the government plans a €2.4BN windfall profits tax on utilities that benefitted from selling electricity pegged to natural gas prices that came from other sources, such as nuclear.

What we’re seeing is a glimpse of the dystopian future climate extremists are trying to foist on us. Their single-minded focus on solar and wind, rejecting every other power source including emission-free nuclear, is behind Europe’s soaring power prices.

Governments are scrambling to limit the damage from policies they believed enjoyed solid support. It’s increasingly clear that polls reflecting voter concern about climate change fail to measure how shallow such support is. Erftstadt in Germany experienced severe flooding earlier this summer, which politicians quickly blamed on climate change. 180 Germans died from the heavy rains. But polls show the Green party, most clearly identified with aggressive policies to combat climate change, garnering only 15-17% of the vote. Improved infrastructure to prevent flooding must seem more sensible than adding windmills.

Cranford, NJ suffered flooding from Hurricane Ida recently (see Climate Change: Prevention or Mitigation?). It’s unclear whether global warming is to blame; Cranford seems to flood every decade or so. I spoke to someone recently whose weekend was spent in the heartbreakingly familiar task of cleaning out a recently flooded basement. But he drew some solace from an expected $200K FEMA disaster relief payment. His family has received FEMA payments in the past, and while I don’t begrudge them the help, such policies hardly encourage moving to higher ground.

President Biden, having failed to persuade OPEC to increase crude oil output (listen to Joe Biden Wants More Oil), is now looking into why gasoline prices at the pump are so high. You’d think he’d use this as justification for the government’s plan to build 500,000 electric vehicle charging stations. Progressive Democrat policies are designed to drive gasoline higher.

European energy policy is turning into a disaster. Well intentioned efforts to lower CO2 emissions are colliding with the physics of relying too heavily on unreliable, weather-dependent energy. Governments and corporations are responding to the shrill protesters who want conventional energy use stopped dead in its tracks. Climate extremists can celebrate Europe’s heavy reliance on a combination of imported and intermittent energy for which they’ve advocated. They should probably celebrate quietly, because the average European household isn’t that enthused about current energy prices.

It’s hard to believe that the solution must be more renewables. Instead, what’s needed are pragmatic policies that value reliable power as much as finding ways to lower emissions. Europe, like California, is showing the rest of us where climate extremists are trying to take us. The US has more diversified sources of energy and hasn’t experienced the kind of price turmoil and unreliability we’re seeing across the Atlantic, except where poor policies such as those in Sacramento are followed.

Chevron CEO Mike Wirth sensibly said the company would rather pay dividends than invest in low-returning solar and wind. His message was that investors should reap the benefits of Chevron producing reliable energy, and if they choose then reinvest those profits in renewables themselves.