Technological advances in solar, wind and batteries receive widespread media coverage. Costs are falling and battery back-up is improving, vital to cope with renewables’ intermittency. As Enbridge CEO Al Monaco noted last week (listen to our podcast, Oh Canada’s Pipelines!), the world is going to use more energy, and consumption of every form of energy will increase. While the media focus is on renewables, fossil fuels represent 80% of global energy consumption. Improving what already works, by dealing with emissions, is also a recipient of considerable R&D.

Hydrogen is receiving increasing attention. It has a reputation for being perennially five years away from cost effectiveness – but investors are certainly taking note of anything that’s hydrogen-related. A couple of months ago we noted how New Fortress Energy (NFE) had seen their stock triple this year on little more than vague plans to ship hydrogen (see Hydrogen Lifts an LNG Company).

The emission benefits of using hydrogen depend on how it’s produced. The most common method is methane pyrolysis, which uses heat to separate hydrogen from carbon (methane is CH4). Another process applies electrolysis to water, which separates the hydrogen atoms from oxygen, Both require energy as an input. 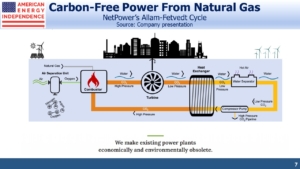 Most hydrogen in use today is “gray”, meaning fossil fuels are used in its production. “Blue” hydrogen is derived from methane, with the CO2 that’s produced as a by-product being captured. That’s already a pretty good result. “Green” hydrogen relies on energy from renewables to power the extraction process.

Hydrogen is an appealing solution if costs can be brought down, because burning it produces water, not CO2. Compared with methane it is less dense, and causes the steel used in pipelines to become brittle, which means it can’t currently be moved in a pure form through existing infrastructure.

But hydrogen is already being added in small quantities to existing supplies of natural gas (methane). For example, Los Angeles is currently adding 4% hydrogen to their natural gas supply and is hoping to get to 10%.

Pipeline companies are watching this area closely, awaiting solid evidence that it can be made commercially viable. If hydrogen use does gain traction, today’s midstream infrastructure businesses are well positioned to benefit, since hydrogen transportation will be via pipelines. The industry will surely find a technical solution to the problems caused by direct interaction of hydrogen with steel – perhaps by applying a protective coating to the inside. 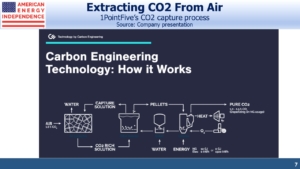 Recently, United Airlines announced an investment in 1PointFive, a joint venture between Occidental (OXY) and Rusheen Capital Management that aims to extract CO2 from the atmosphere. Airlines know that renewable energy won’t help them curb emissions – batteries are far too heavy to be built into an airplane. And jet fuel has the added benefit of being burnt as it’s used, decreasing weight.

Aviation is estimated to produce over 2% of global CO2 emissions. Post-Covid, flying is likely to resume its upward path in developing Asia at a minimum, even if a full return to normalcy is five years away as some airline executives fear. Nonetheless, it highlights that solar and wind offer a limited set of solutions, which means ongoing need for liquid fuels.

Extreme weather events have caused a jump in solar panel insurance. Last year a hailstorm in Texas caused $70MM in damage to a solar farm. California wild fires damaged three sites earlier this year. Solar panels are easily damaged, and insurance rates are 20-30% higher than a year ago.

“We have seen projects that were achieving their expected returns no longer able to do that, as a result of the change in the cost of insurance,” said Michael Kolodner, US power and renewables practice leader at Marsh, an insurance broker.

Those who blame these and other extreme weather events on climate change will not appreciate the irony. 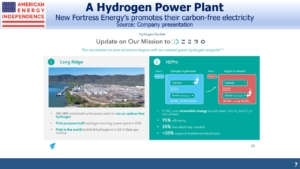 NetPower says they have, “Multiple projects are in development worldwide for rapid global deployment of commercial units.”

Cleaner ways of burning natural gas; extracting harmful CO2 out of the atmosphere; commercially viable hydrogen. These are all potential solutions to the problem of lowering emissions that don’t rely on solar panels, windmills and batteries. These are the types of breakthrough that could quickly put today’s pipeline companies at the forefront of combating climate change. What’s clear is that innovation is happening in many more areas than simply the use of sun and wind.