The global energy crisis is becoming the biggest investment story of 2021. US consumers are uniquely unaffected so far by spiraling prices for natural gas and coal. Crude oil continues to cause some discomfort at the White House, which regularly pleads with OPEC to offset their own policies by increasing supply. Limited export capacity for Liquified Natural Gas (LNG) is keeping a lid on domestic prices for now, but as more becomes available the huge US discount will narrow, to the benefit of domestic natural producers and the detriment of customers.

It would be wrong to blame this on Britain’s inconvenient recent loss of windpower (see The Cool North Sea Breeze Lifting US Coal). Higher prices are exposing the poorly conceived energy policies of many western governments. By pandering to climate extremists to demonize fossil fuels, the world is now coming up short of energy. High prices for natural gas are stimulating demand for coal. Even in the US, the Energy Information Administration expects the black stuff to regain market share from natural gas in power generation. A decade of reduced emissions due mostly to cheap natural gas is being reversed because of a shift in relative pricing. The Biden administration is likely to find itself explaining why US CO2 emissions are approaching pre-Covid levels by next year’s midterms (see Emissions To Rise Under Democrats).

In February last year, there was a period of a couple of weeks when Covid became the major news story in Asia and Italy but hadn’t yet reached America. It felt like waiting for a distant tsunami to reach our shores. The global energy crisis feels eerily similar. Other than a mild rise in prices at the pump, it hasn’t drawn much media attention.

By contrast, with European natural gas prices up roughly six-fold, politicians are scrambling to deal with the fallout. France plans to cap utility bills, providing what French PM called a “tariffs shield.” Governments across Europe will spend tens of €BNs over the next several months.

China’s Vice Premier Han Zheng reportedly told state-owned energy companies to secure supplies so as to ensure continued power supply “at all costs.” Such a directive will concentrate minds among those receiving the directive – the consequence of failure is likely to be more than just a smaller year-end bonus. 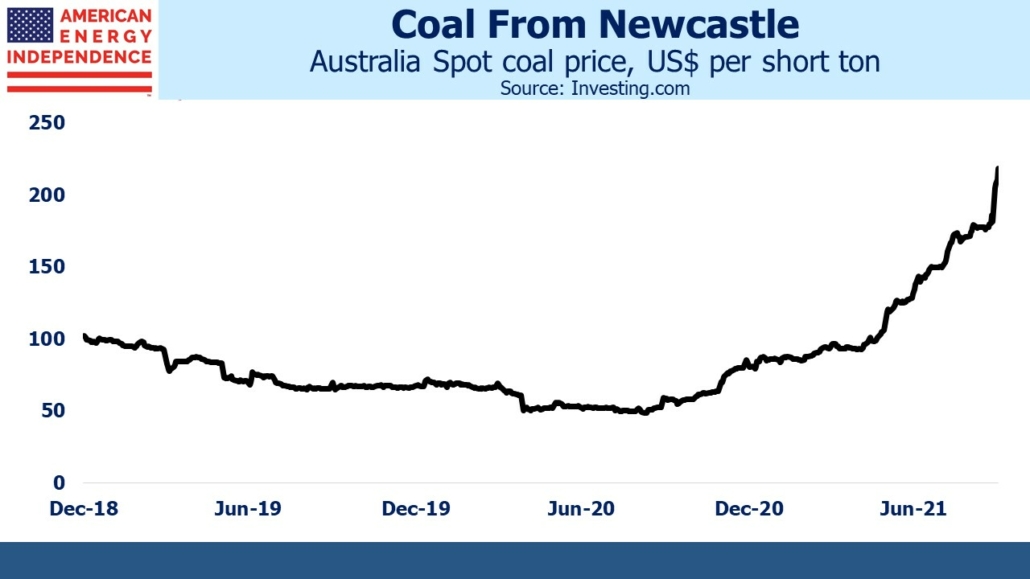 China’s highly motivated coal buyers are competing with many other countries. Over half of India’s power plants are down to fuel stocks (mostly coal) of under three days, well short of the two-week government minimum. A German power plant recently shut down because it ran out of coal.

The scramble is all about acquiring fossil fuels, because they’re reliable. There’s no evidence of a scramble to obtain more solar or windpower. The managers of China’s power supply mandated to ensure reliability are not rushing to buy windmills.

The public policy error committed in many countries including the US has been to pander to climate extremists while disingenuously pretending that transitioning to low carbon energy can be done without disruption or enormous expense. The EU has a form of carbon tax via a cap and trade system, but it’s clearly not onerous enough to affect demand. Instead of fossil fuels generating increased taxes that European governments could redeploy into renewables, they’re going to be heavily subsidizing coal and natural gas use by capping homeowners’ utility bills. 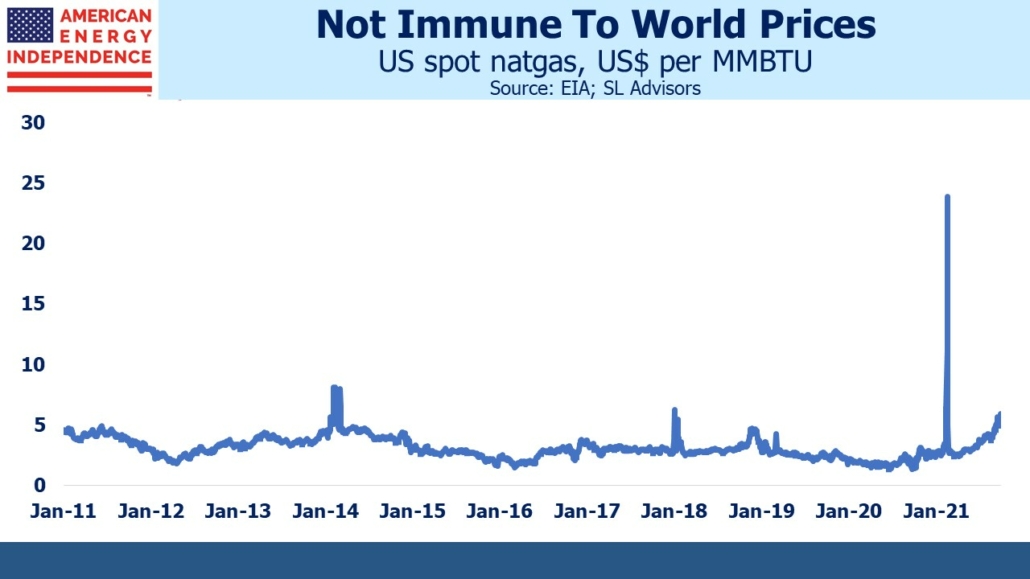 Since no politician has hailed high energy prices as a successful consequence of policies to advance the energy transition, government leaders have concluded that public concern about global warming doesn’t imply a willingness to spend much.

There hasn’t been much serious thought given to the transition. It’s being handled disastrously. Tiresome Greta Thunberg (listen to Greta’s Grandstanding), who admonished the world for jeopardizing her future (“How dare you”) is what passes for climate strategy.

The result is that higher energy prices are headed to the US too.

This will be good for energy investors, but will also challenge the Fed’s belief that elevated inflation will be coming down. Energy prices will feed through to the general price level. German inflation reached a 29-year high of 4.1% in September, and across the eurozone it reached a 13-year high of 3.4%. German workers at a motorhome manufacturer are striking for more pay. The country’s biggest union, IG Metall, is demanding 4.5% pay hikes because “Inflation in Germany keeps going up”.

The Fed believes short term logistical challenges are impeding the supply of goods, and as these are resolved price pressures will recede. They ought to consider whether the 25% of GDP that the IMF calculates the US government has provided because of Covid might be the real issue, along with the Fed’s monetization of much of the debt that was issued as a result.