The Bull Market in Natural Gas

Pipeline company earnings for 2Q21 were satisfyingly unremarkable, and were followed up recently with news of further givebacks to investors. Cheniere Energy implemented a dividend as part of a comprehensive long term capital allocation plan. They also plan to repay $1BN of debt annually as they target an investment grade rating. The company expects to generate $15-17 per share in Distributable Cash Flow DCF over the long run (stock closed on Friday at $88). The dividend had been long expected – Cheniere exemplifies the industry’s improving balance between growth projects and free cash flow as well as any company.

Overall there were no notable 2Q21 earnings misses versus consensus expectations. 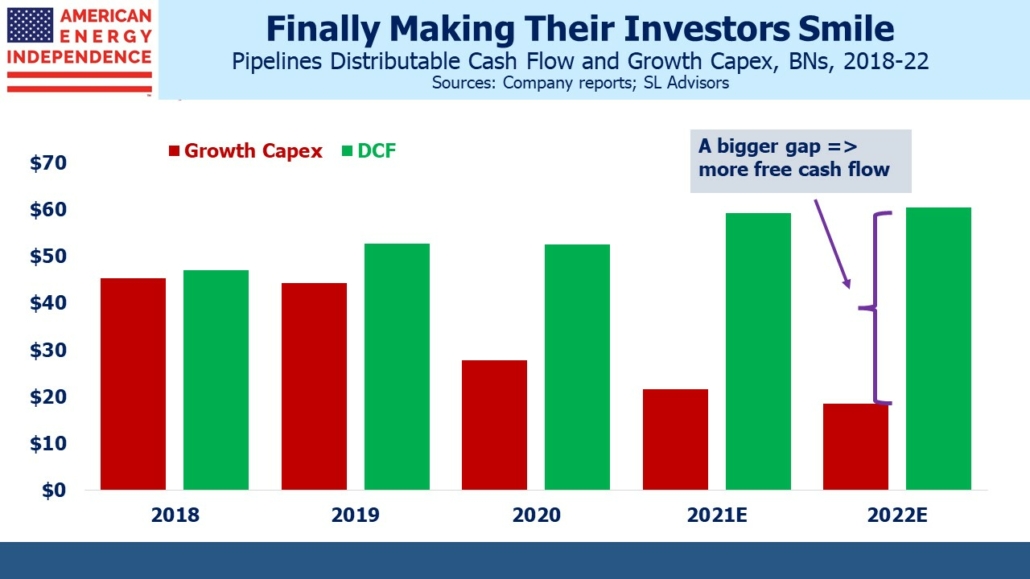 Free Cash Flow (FCF) continues to grow. The pipeline sector has undergone a significant change to its cash generation since 2018, when virtually all its DCF was plowed back into new projects. Investors demanded improved financial discipline, but the Covid shock caused further cuts in growth plans. The Democrat administration has also helped, by continuing to make new fossil fuel production unappealing. However, this hasn’t stopped the White House from appealing to OPEC to offset such policies by increasing crude oil supply (see Is Biden Vulnerable At The Gas Pump?). 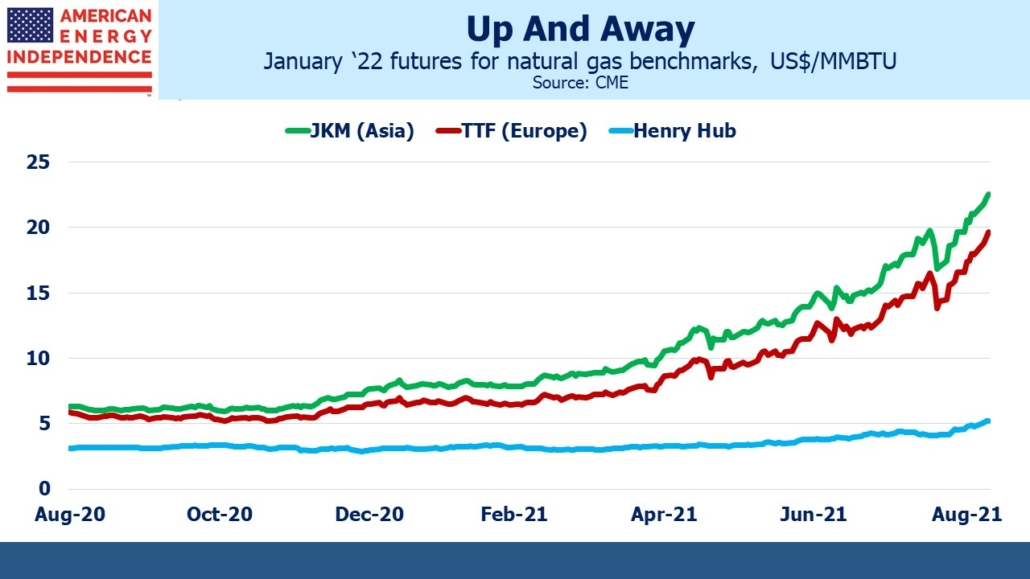 Against this backdrop, natural gas prices have been rising steadily. Last winter saw sharp price spikes for all three benchmarks as the northern hemisphere winter delivered periods of severe cold. Traders are preparing for a repeat. Global supply shortages have been exacerbated in recent months by a drought in Brazil which reduced their output of hydropower. Congestion in the Panama Canal has slowed deliveries of Liquified Natural Gas (LNG) to Asia. This has forced some tankers to sail round the tip of South America, adding to transport costs and limiting supply.

European imports of natural gas from Russia have also been lighter than expected, with official explanations from Gazprom being vague and unconvincing. It’s a safe bet that Europe’s increased reliance on Russian imports via Nordstream 2 will at times in the future look ill-advised. On Friday Russia announced the completion of the controversial pipeline.

If crude oil had more than doubled over the past six months, as natural gas has, financial markets would be intently focused on every daily move. Pipeline stocks would be enjoying a similar bull market, even though oil prices affect sentiment more than cashflows. By contrast, rising natural gas prices really are benefitting the US – enabling Cheniere’s LNG export facilities and Williams’ pipeline network to increase cash returns to shareholders.

The spread between US natural gas versus the Asian and European benchmarks is easily wide enough to cover LNG transportation costs. Deliveries to US LNG export terminals are running at 10.9 Billion Cubic Feet per Day (BCF/D), up from 3.7 BCF/D in the same period last year. Last week 20 LNG tankers left US ports carrying 74 BCF of LNG to foreign customers. 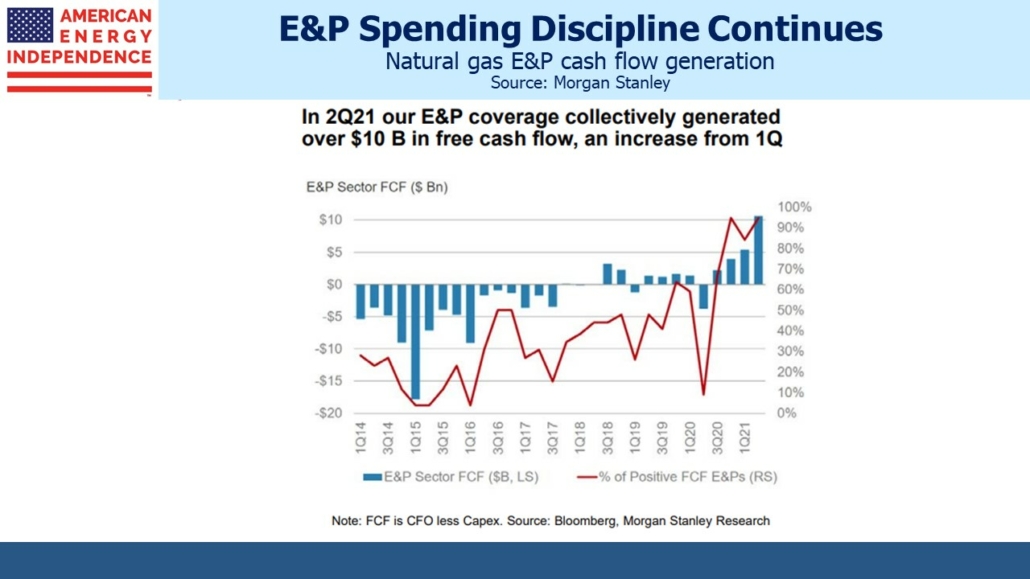 Demand is recovering faster than supply. Associated gas output remains flat YTD since oil production from places such as the Permian remains below pre-Covid levels. Dedicated dry gas regions such as the Marcellus and Haynesville are increasing output, but the net result is that domestic prices are being forced up modestly too.

Financial discipline remains strong. Natural gas E&P names covered by Morgan Stanley reached $10BN in FCF for 2Q21, a welcome development after years of negative or flat FCF. These are some of the customers of pipeline companies – upstream as well as midstream is responding to investor demand.

Growing LNG exports are the main driver of increased domestic demand. Production is lagging behind. This led Morgan Stanley to recently ask “Is The Era Of Low Prices Over?” Production is currently running around 93 BCF/D, still below December 2019’s 97 BCF/D just before Covid. Near term risks appear skewed to the upside, especially if the northern hemisphere has a colder than normal winter.

Looking farther ahead, supply is likely to increase, which will bring lower US prices. This is because there still exists ample US supply that can be produced profitably at below $3 per MMBTU. 2-3 BCF/D of increased output looks likely over the next couple of years, much of which will feed our increasing LNG export capacity.

The budget plan making its way through the House of Representatives currently excludes natural gas from its list of “clean” energies eligible for subsidies from the Department of Energy. This is a mistake, since technologies already exist allowing natural gas to be burned cleanly. Carbon capture and sequestration (see Carbon Capture Gains Momentum) and the Allam-Fetvedt Cycle (see Clean Energy Isn’t Just About Renewables) are two examples. Nonetheless, global demand for US natural gas is growing, and puts the domestic pipeline industry in a good position for continued growth.

On a different and more somber topic, it would be remiss of me not to acknowledge the twentieth anniversary of 9/11. Like tens of thousands of people who worked on Wall Street at that time, I am remembering friends killed in that attack. In the first half of my career during the 80s and 90s I traded derivatives with Euro Brokers and government bonds with Cantor Fitzgerald, two firms that suffered substantial loss of life amongst their employees. Everybody remembers their location and what they were doing at that time. Our thoughts are with the families and loved ones of the people who lost their lives on that day.