What do you do if your fund’s index is shrinking? This is the dilemma that many retail investors in MLP-dedicated mutual funds and ETFs will be confronting in the months ahead.

The trend for MLPs to simplify by combining with their corporate General Partner (GP) is well established. The recent Federal Energy Regulatory Commission (FERC) ruling (see FERC Ruling Pushes Pipelines Out of MLPs) prompted us and other observers to conclude that this trend is likely to continue, if not accelerate (see Are MLP Going Away?). Last week Tallgrass Energy Partners (TEP) combined with its GP Tallgrass Energy GP (TEGP), the first such announcement since the FERC ruling on taxes and one of the few simplifications to result in a bounce in the stock price. TEP will drop out of the Alerian Index, reducing the number of constituents to 41. At the end of 2015 it stood at 50.

On Monday, oil driller Legacy Reserves LP (LGCY) announced they were converting from an MLP to a corporation, causing their stock to jump 11%. CEO Paul Horne clearly will not miss running an MLP. In the press release, he noted that, “…we look forward to stepping out from the dark cloud we have been under as an upstream MLP.” On Friday, Viper Energy Partners LP (VNOM) jumped 10% after electing to be taxed as a corporation. Simply by agreeing to be a taxpayer, thereby issuing 1099s instead of K-1s, they became more valuable. Their presentation noted, “VNOM will be uniquely positioned as a first-mover and leading public minerals yield vehicle without the limitations of an MLP.” These moves reflect the disdain investors have developed for the MLP structure, and the bigger ones contemplating their own conversion will have taken note.

The reduced corporate tax rate makes MLPs relatively less attractive. FERC’s elimination of imputed tax expense, although inconsequential in the near term, will affect cashflows for some interstate natural gas pipelines and, in a couple of years some liquids pipelines too. Moreover, MLP yields remain stubbornly high. They are attractively valued, but as such they represent an expensive source of equity capital for issuers. The older, wealthy American who is the typical MLP investor wants steady income. The shifting of cashflows to fund new infrastructure projects demanded by the Shale Revolution has alienated him (see Will MLP Distributions Pay Off?). All these factors are reducing the value of putting eligible assets in an MLP.

As a result, MLPs are less than half of the midstream energy infrastructure sector, and each MLP simplification further reduces their number. This need not matter much for a holder of individual MLPs. As your MLPs convert to corporations, your portfolio’s composition shifts as well. TEP investors will still own the same assets via Tallgrass Energy, LP (TGE), a corporation for tax purposes.

But if you’re invested in an MLP-dedicated fund, you and your fund manager face a problem. A shrinking Alerian MLP Index (AMZ) creates a dilemma for funds that are benchmarked to it. If they do nothing, the index (and therefore, the fund) will become steadily less representative of the sector, with fewer names and a smaller median market cap. Today, the median market cap of AMZ’s constituents is only $1.8BN, compared with $15BN for the broader American Energy Independence Index (AEITR). Not coincidentally, since the FERC announcement broader, corporate exposure to infrastructure has outperformed the MLP-dedicated Alerian index. 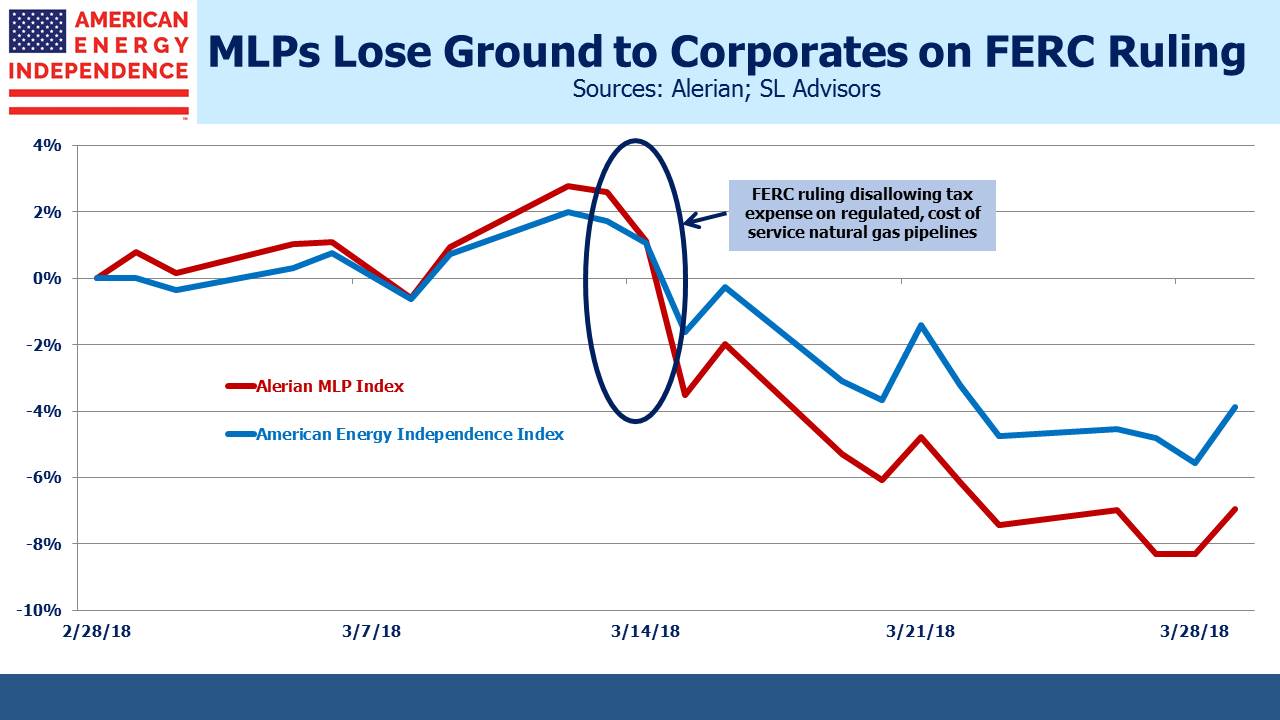 To put this in perspective, the Alerian MLP ETF (AMLP), various tax-impaired mutual funds offered by Oppenheimer Steelpath, Goldman Sachs, Center Coast and Cushing, along with the JPMorgan Alerian MLP Index ETN hold a combined $24BN in MLPs linked to AMZ.  This is 14% of AMZ’s float-adjusted market cap. If these funds do nothing, tracking their index will shift them into more concentrated portfolios, or smaller names, or both.

Rather than fight against this tide, it might make sense for them to consider switching to a more representative index that better reflects energy infrastructure. However, like watching elephants dance, it’s unlikely to be elegant. If AMLP announced that it was substituting a different, broader index, that would immediately depress the prices of those MLPs that it would need to sell, hurting performance immediately. Actively managed mutual funds could implement portfolio shifts to a broader index over weeks or months, and although this might lessen the immediate market impact, it would introduce tracking error against both old and new benchmarks. It would likely be disruptive to their performance.

If all these funds sold 75% of their MLPs they could even claim to be RIC-compliant and no longer subject to the drag of corporate taxes. Unfortunately, that would require selling $BNs of MLPs, and the reason MLPs are converting to corporations is because MLP prices are depressed.

MLP-dedicated funds face an unenviable business decision, and they’re clearly best served by the status quo. Their best outcome is to delay changing their benchmark indefinitely, and hope to convince their retail investors that MLP-only funds remain a viable proposition. The risk for current and future holders is that the shrinking Alerian Index eventually forces them to change, which could be tumultuous. It might be one reason why net inflows to MLP-dedicated funds are flat since last Summer. In addition to the headwinds of corporate taxes (see AMLP’s Tax Bondage), you can add index uncertainty. It’s The Alerian Problem.