The Federal Energy Regulatory Commission (FERC) became MLP investors’ new BFF last week. Only four months ago, FERC’s revised policy on allowing imputed tax expense in setting tariffs caused a memorable intra-day 10% drop and contributed to dismal 1Q performance (see FERC Ruling Pushes Pipelines Out of MLPs). Ever since, MLP investors have regarded FERC warily, sensitive to additional market shocks. Cost-of-service pipeline contracts, historically common but rare nowadays and the source of much of this volatility, are unlikely to be employed in the future.

The clarification issued last week was unambiguously, if modestly, good. MLPs are still not allowed to include taxes paid by their equity investors as an operating cost in calculating applicable rates on interstate natural gas pipelines. But they can now include taxes paid by a corporate parent (if they have one), a feature omitted from the March announcement. Moreover, Accumulated Deferred Income Tax (ADIT), which most natural gas pipeline MLPs had built up, will no longer have to be refunded to customers. This had been recorded as an income tax liability using accelerated depreciation, offset by cash received from customers on cost-of-service contracts that relied on straight-line depreciation.

Depending on timing, some firms had accrued a significant net cash benefit and faced the prospect of returning this excess to customers. One research firm estimated the sums involved in the $BNs, in effect a retroactive fee adjustment. This possibility has now been eliminated.

By excluding ADIT, pipelines will show more equity invested which will in turn lower their Return on Equity (ROE). Typically, a pipeline tariff is deemed “fair and reasonable” if it generates a 10-16% ROE.  The net result will be that some contracts will fall below the threshold, reducing the likelihood of lower rates and even opening the door to bigger rate increases.

Since 2014 when Kinder Morgan (KMI) led the way, large MLPs have been converting to corporations in order to access a broader set of equity investors (see Corporations Lead the Way to American Energy Independence). More recently, Enbridge (ENB) and Williams Companies (WMB) both announced plans to roll up their MLP affiliates. TransCanada (TRP) told investors that financing assets at their MLP, TC Pipelines (TCP), was no longer viable.

Uncertainty around future FERC policy guidance tipped the scales for these conversions. But many other incentives to abandon the MLP structure and become a corporation remain. These include: onerous profit sharing with the GP (known as high IDR splits) which makes raising equity capital more expensive; potential tax shields at a corporate parent, reducing the tax advantage of being an MLP; the small investor base for MLPs (buyers are mostly old, rich American taxpayers); limited opportunities to drop down assets from parent; unfavorable rating agency treatment of debt due to the complexity of structure; and poor corporate governance rights.

Investors in Boardwalk Partners (BWP) probably received the worst FERC-induced outcome. The March policy statement depressed BWP’s stock price, letting Loews (the General Partner or GP) trigger an obscure clause in their Limited Partnership Agreement. This allowed them to  buy-in all the outstanding BWP units at their recent average price ($12.06), close to its all-time low. Only five years ago BWP was trading over $30. The Loews buy-in relied on a legal opinion that March’s announcement was an adverse regulatory ruling harmful to their business. The buy-in transaction duly closed last week, conveniently just before FERC’s revised policy guidance which would likely have nullified the legal opinion on which the buy-in relied. This is an example of the weak governance to which MLP investors subject themselves when there’s a controlling GP. Former BWP holders will join the growing list of MLP critics.

Investors welcomed the bounce. FERC solidified its reputation for unpredictable rulings that roil the market. But for CFOs trying to optimize their financial structure, their regulator’s market moving pronouncements aren’t helpful. The 202-page policy notice was accompanied by a concurring statement (rather like a dissenting opinion in a Supreme Court ruling) from the two Democrat commissioners. They noted that, “today’s order is simply guidance” and that individual rate cases would be judged on their legal merits.

Although the economics for MLP-owned natural gas pipelines are better than before, it’s unlikely that any MLP that’s converted to a corporation is regretting it. WMB will have to re-examine its previously announced roll-up of WPZ, but will also have to consider a somewhat capricious regulator whose direction may change again following the next general election in 2020.

East Daley released analysis showing that Williams Partners (WPZ) might be better off remaining separate from its corporate parent, WMB. They showed the treatment of TransCo’s pipeline network (WPZ’s principal asset) before and after the policy update, with an almost 5% swing in calculated ROE. The new, lower return supports the case for higher tariffs, which is why MLPs rose.

Interestingly, although Thursday was a good day for the sector, the Alerian MLP ETF (AMLP), which is 100% MLPs, saw net redemptions of $100MM. The FERC news raised prices but didn’t induce new buying. A week of arcane accounting developments (ADIT) and obscure adverse legal clauses (BWP) showed that MLPs are complicated.

In other news, KMI’s 2Q earnings were modestly better than expected. Of note was a 12% increase in volumes of natural gas, reflecting growing U.S. production. It also looks likely that the $2BN proceeds of their sale of the TransMountain pipeline to Canada’s Federal government will be used to pay down debt. Like most midstream energy infrastructure businesses, KMI is far more stable than their stock price would imply. Its Distributable Cash Flow (DCF) is on target to reach $4.6BN this year, up 3%. Since 2014, its worst result has been a 4% decrease. 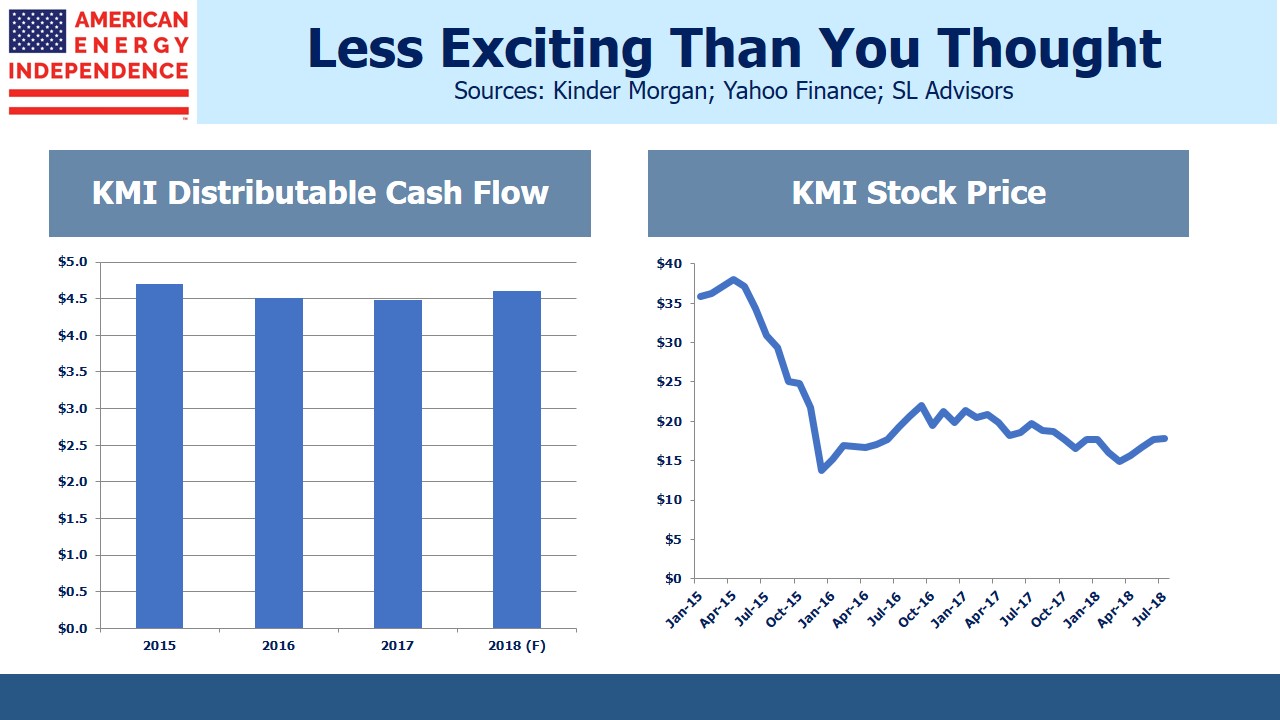 Nonetheless, KMI’s stock has taken investors on a wild ride. In spite of their steady DCF, in late 2015 they slashed their quarterly dividend by 75% from $0.50 to $0.125, so as to redirect cash towards growth projects and pay down debt. It was a move that many others followed. Today, its payout is at $0.20 and is 2.4X covered by DCF. Decisions on how to finance their business were far more impactful than operating performance, which is why it sports an 11.5% DCF yield, awaiting buyers from more expensive sectors.

In many ways KMI is reflective of the sector.

We are invested in ENB, KMI, TRP and WMB. We are short AMLP.