The continued ascent in natural gas prices has transfixed the energy sector but hadn’t much impacted broad market commentary, until recently. Europe has an energy crisis to be sure – a combination of over-reliance on windpower, years of policy discouraging natural gas production and strong global demand for natural gas. If sentiment in the pipeline sector was as sensitive to natural gas prices as it is for crude oil, its performance would likely have been even stronger in recent days. The recent jump in crude prices has grabbed more mainstream attention, propelling energy sector stocks up with it.

The Federal Reserve and other central banks will have to grapple with the feedthrough impact on inflation. Policymakers already exclude food and energy from the inflation statistics they target, on the basis that these are volatile and mean-reverting. However, higher utility bills and increased cost of transportation will have a secondary effect on most areas of the economy.

Wage inflation has historically been the trigger for shifts in monetary policy – wage increases beyond what improved productivity justifies. The same test could be applied to commodities though. A thousand cubic feet (MCF) of natural gas delivers the same one million BTUs whether the price is $3 per MMCF as it was a year ago or $6.25 as it is currently. Even at that level it’s a quarter of the price European and Asian buyers are paying for imports of Liquified Natural Gas (LNG).

The only constraint on US prices is the availability of more LNG export terminals capable of chilling methane so it’s 1/600th of its normal volume. As more LNG export capacity becomes operational, domestic natural gas prices will move higher. Interestingly, European prices for carbon credits have been following natural gas prices higher. Even at €70 per metric tonne, they’re no constraint. Natural gas generates 121lbs of CO2 per MCF, so a power plant has to pay around €3.30 per MCF for CO2 credits. The fact that these credits are rising with natural gas prices reveals the strength in demand. 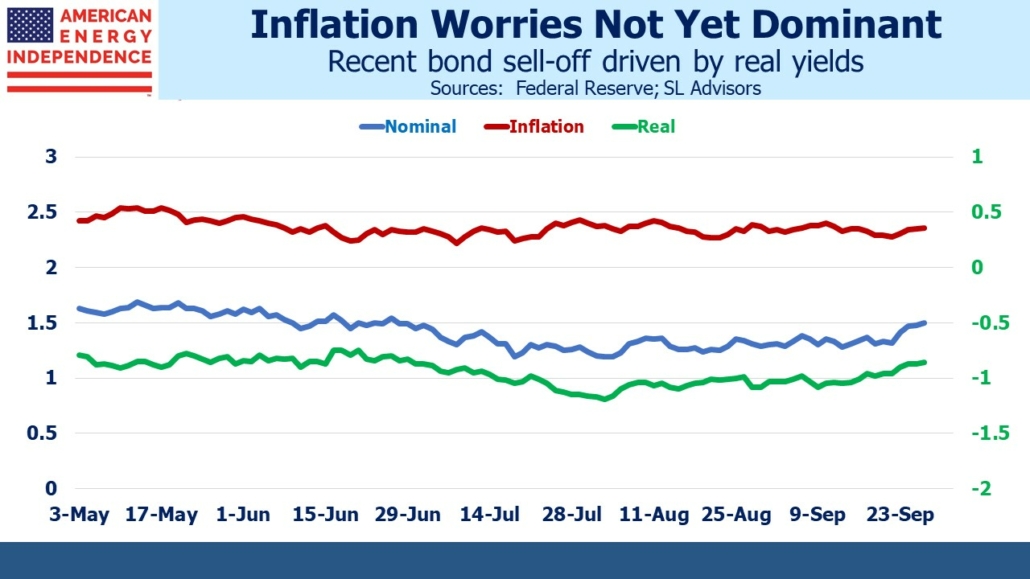 The FOMC continues to believe inflation is transitory, which is why they’re comfortable with a very gradual reduction of bond market support. It looks as if monthly buying of mortgage-backed securities will continue into next spring, a year after it was abundantly clear that the US housing market was hot (see Federal Reserve Housing Support Has Run Its Course).

Because the FOMC relies on the quirky Owners’ Equivalent Rent (OER) survey of homeowners to gauge the cost of shelter, they don’t see housing inflation (see Why You Can’t Trust Reported Inflation Numbers). The followers of OER are probably limited to a few hundred people, consisting of statisticians at the Bureau of Labor statistics, Wall Street economists and the FOMC. The rest of America looks at house prices. So the Fed is once again feeding a housing bubble by not looking at it.

An unusually calm North Sea was the proximate cause of Europe’s energy crisis (see Europe Follows California Into Renewables Oblivion), but the loss of windpower has exposed years of underinvestment in conventional energy such as natural gas. Higher prices are an obvious consequence and are part of the climate extremists’ playbook. Shifting towards renewables was always going to lead to higher prices (see Is The Energy Transition Inflationary?). This provokes two big questions for markets: (1) will the Fed feel compelled to respond to energy-driven inflation as it becomes clear that it’s not transitory, and (2) does the jump in natural gas prices suggest that we need more supply, or will unreliable solar and wind benefit from improved relative pricing? 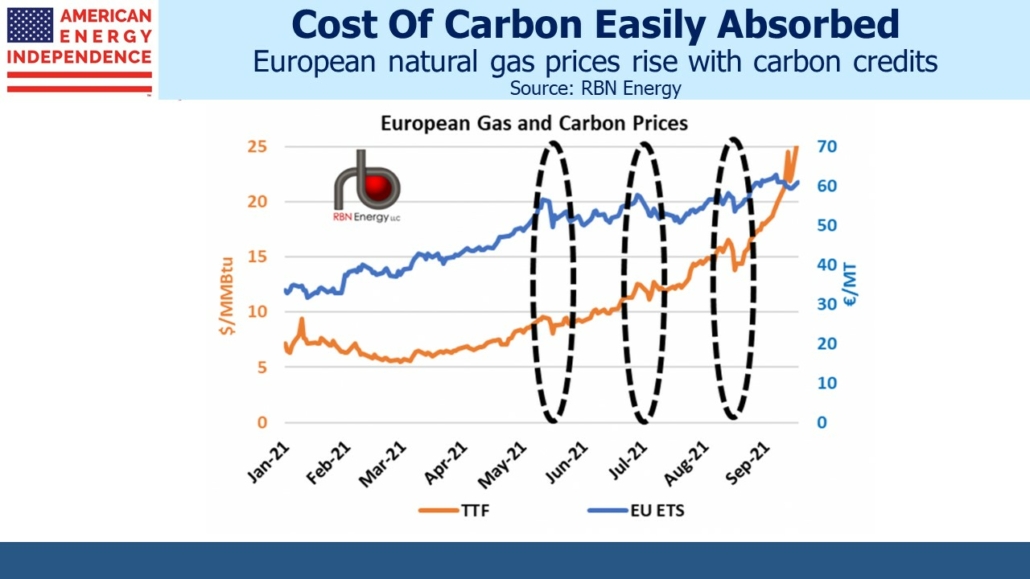 On the first question, we’d bet on the FOMC exploring every alternative explanation before concluding that inflation requires changes in monetary policy. They’ll be relieved to see that the sell-off in bonds is mostly driven by rising real yields. The market is adjusting to approaching cessation of Fed buying. Ten year implied inflation has remained in the 2.3-2.4% range.

The second question is more complicated. Investment in new oil and gas production has been declining for years. Rich world policies that discourage fossil fuels and climate extremists’ efforts have constrained energy sector capex. Today’s high prices are the result. Solar and wind power are incapable of filling the void. As Britain has discovered, intermittency remains a huge problem. Back-up battery storage still isn’t available on economic terms. Power grids require substantial upgrades. So, do policymakers correctly accept the inevitability of continued natural gas use for decades to come while seeking technological solutions to emissions, such as carbon capture? Or do they conclude we need even more renewables? Climeworks is a start-up company that sucks CO2 out of the air. It was profiled in a WSJ story describing OPEC’s expectation to gain market share through 2045, helped by global demand growth led by emerging economies and falling rich world production.

New Jersey is one state heading for poor choices. Earlier this week PennEast dropped plans to build a natural gas pipeline from Pennsylvania to New Jersey because of continued regulatory challenges. As a result, New Jersey customers will in years to come face less reliable power.

Public support for the energy transition is about to be tested by higher prices. Polls show voter support until it hits their wallets. Political leaders sure of their footing will embrace today’s energy prices as an important element of the transition.

Meanwhile, higher energy prices will feed into the broader inflation statistics in the months ahead.