Can Trump Manage the Economic Cycle?

The current economic recovery, launched out of the cauldron of the 2008-09 financial crisis, continues to percolate. Directly following the 2016 presidential election, many stunned observers forecast numerous types of disaster. So far, those dire predictions have been wrong, although the future always provides lots to worry about

The cancellation of tariffs with Mexico fits the Trumpian pattern of seizing what’s on offer and declaring victory – not difficult when no lines had been publicly drawn in the sand. The president’s 2020 re-election campaign remains an important element in U.S. economic policy (see The Trump Put).

Tariffs on Mexican imports would have been disruptive to sectors such as autos, given the integrated supply chains made possible by NAFTA. Republicans in Congress were considering blocking them. The protracted dispute with China has dampened growth somewhat, but the consequent political pressure has, oddly, fallen more on the Fed than the White House.

Six months ago, Fed chair Jerome Powell carelessly allowed that multiple rate hikes might be coming: “Maybe we’ll be raising our estimate of the neutral rate and we’ll just go to that, or maybe we’ll keep our neutral rate here and then go one or two rate increases beyond it.” (see Bond Market Looks Past Fed).

Those hawkish comments were quickly walked back, while Trump has continued to call for lower rates.  Some view this as challenging the Fed’s independence. Ironically, much of the justification for lower rates lies with the constraints being placed on trade with China, policies implemented by the White House. Last week Powell said, “We do not know how or when these issues will be resolved.” He continued, “We are closely monitoring the implications of these developments for the US economic outlook.”

Once again, the Federal Open Market Committee’s (FOMC) “blue dots” are exposing how far behind the market they are. The FOMC’s long run equilibrium rate for the Fed Funds rate remains at 2.8%. Ten year treasury yields, a decent proxy for the average expected short term rate over the next decade, are much lower, at 2.17%. 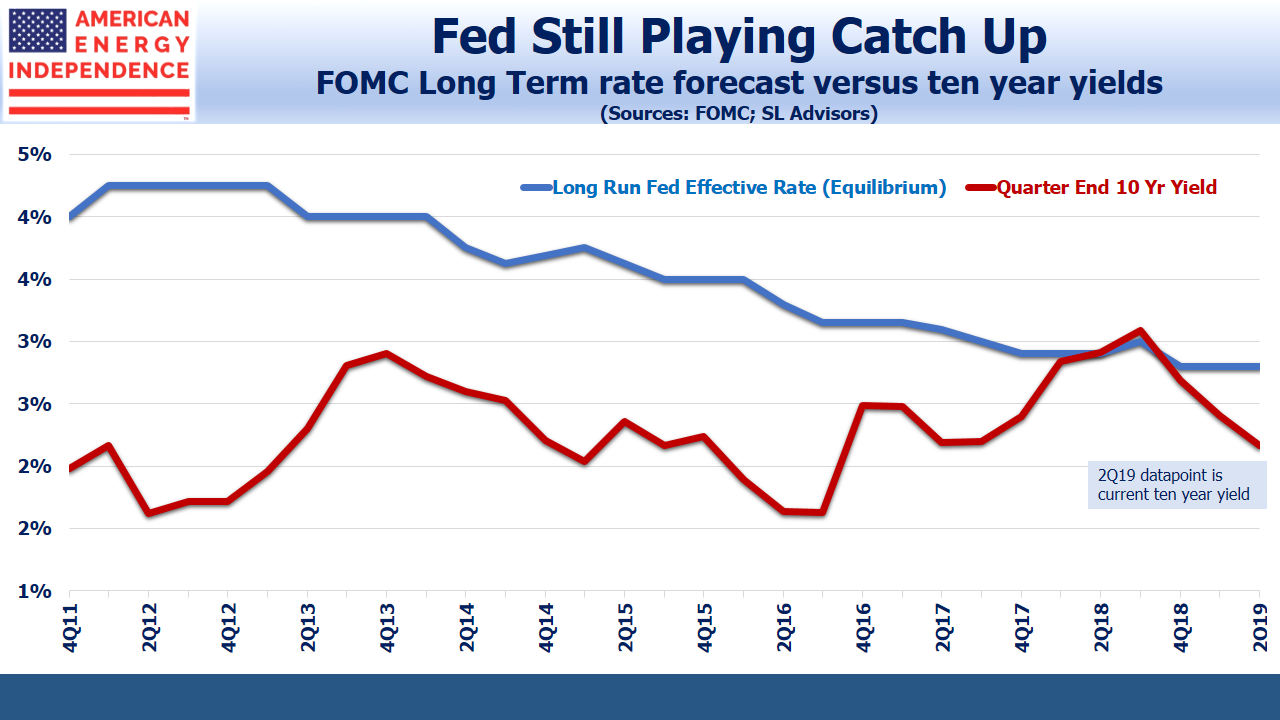 For years the Fed has been lowering their policy guidance, lagging a process well anticipated by bond investors. Futures markets are predicting almost three rate cuts over the next year, while FOMC projections are for unchanged policy.

On current form, it’s likely the Fed will “independently” grant Trump’s desired rate cuts. Don’t be surprised if Chinese trade tensions are then resolved in time for the election. It seems to be how things work nowadays.