MLPs Searching for a New Look

This year’s MLPA conference at the Hyatt Regency Orlando reflected the sector’s current transition. It was rebranded from years past to be the MLP & Energy Infrastructure Conference (MEIC), now open to energy infrastructure corporations as well as MLPs. Revealingly, this inevitable recognition of the continuing shift of MLPs to a corporate structure was not embraced by former MLPs. Kinder Morgan (KMI), Oneok Inc (OKE) and Williams Companies (WMB) all declined to participate.

Since almost no corporations showed up, it was an MLP conference after all, albeit with fewer companies and what seemed like a smaller crowd. The conference took place in a more modest set of ballrooms at the Hyatt while another, unrelated event occupied the larger space. The managers of MLP-dedicated, tax-burdened funds (see AMLP’s Tax Bondage) are alone in their unequivocal support of MLPs as the best way to invest in energy infrastructure. The diminished conference must have been a sobering assault on their conviction.

Clearly, energy infrastructure corporations see no value in being associated with MLPs. Moreover, in the smaller group meetings of a half dozen or so investors with management teams, most MLPs were left defending their decision to persist with the MLP structure. “When will you convert to a corporation?”, known as the Simplification Question, came up in every single meeting we attended, even when the company was doing very well (such as Crestwood, CEQP). One management team had an internal over/under bet on how many times they’d be asked all day – trading was at 75.

The industry’s shift to a growth model has already alienated their traditional, income seeking investor base by resulting in widespread distribution cuts to pay for new projects (see Will MLP Distribution Cuts Pay Off?). This is a self-inflicted wound, but the March FERC (Federal Energy Regulatory Commission) Policy Statement may turn out to be nearly as ruinous (see FERC Ruling Pushes Pipelines Out of MLPs). A panel of lawyers discussed the thinking behind the change, which was cited by both WMB and Enbridge (ENB) last week as they rolled up their MLPs into the corporate parent (see Transco Dumps its MLP). Attendees overflowed from the cozy ballroom.

It seems highly likely that FERC  gave only brief consideration to the impact of disallowing income tax expense from cost-of-service natural gas pipeline contracts. The idea that an MLP could expense taxes paid by its equity holders in calculating rates strikes some as odd, but it had been accepted practice for many years. Following a successful court challenge in 2016, FERC waited almost two years to implement the regulatory change required by the judge’s ruling. FERC’s ponderous approach, as well as subsequent questions over precise implementation details, provided further impetus to abandon the uncertainty of the MLP structure. Corporate-owned pipelines are not similarly affected, and so represent a more predictable form of ownership.

One odd twist is that although disallowing an expense ought to benefit the customer, by rolling up into a corporate parent an MLP’s assets are revalued from historic cost to market values. This could ultimately lead to higher tariffs, since cost of service must include an appropriate return on a now more highly valued asset. The lawyers on the panel were unwilling to criticize FERC, since they often represent clients appealing the regulator’s decisions. Among attendees, there was widespread consensus that FERC had screwed up. However, the panel held out little hope of a policy change unless ordered by a Federal court. 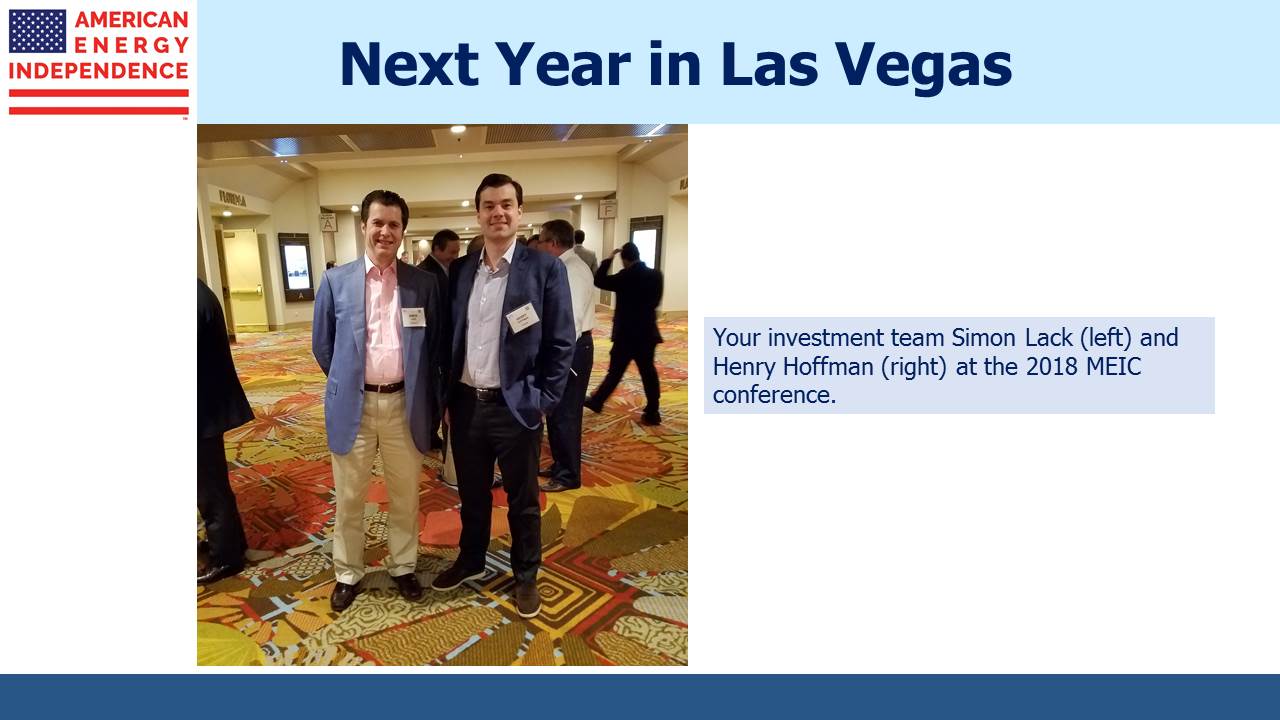 Meetings with management teams weren’t only about changing structure. Fundamentals are very strong across the U.S. energy industry, and business is booming for midstream infrastructure. Pursuit of growth projects, while maintaining healthy distribution coverage and reducing leverage, was the theme. The Shale Revolution has long been a volume success, but it’s finally translating into a financial success as well. Investors have had a long wait.

Although the Permian is producing record amounts of crude oil, one CEO said he thought associated natural gas output could reach 30 Billion Cubic Feet per Day (BCF/D), versus 8-9 BCF/D currently. He felt inadequate take-away infrastructure would consequently drive the price at the local Waha hub to $1 per Million Cubic Feet. American natural gas is likely to remain among the world’s cheapest.

Water disposal came up in some discussions, and with volumes of produced water (i.e. water that comes out of the ground with the oil) in the Permian running at 4X the amount of crude output, treatment and disposal is providing additional infrastructure opportunities. Several firms were considering investments in this area.

Plains All American (PAGP/PAA) management was surprisingly defensive when asked about their simplification plans. They feigned surprise at the question (perhaps out of boredom) and suggested to one investor that perhaps he didn’t fully understand their structure. What’s really hard to understand is how the biggest crude oil pipeline operator in the Permian isn’t generating better results when record oil production is exceeding take-away pipeline capacity.

This has caused the Midland-Cushing differential to widen to $15 per barrel recently, far above the $2-3 pipeline tariff between the two hubs (see Dwindling Pipeline Capacity Causes FOMO). It should be a huge win for PAGP, whose investors holds the stock for precisely this scenario. But earlier 2016-17 mis-steps in Supply and Logistics caused PAGP to hedge 2018 basis risk far more conservatively, largely missing out on today’s excess demand for pipeline capacity. At still approximately 60% below their 2013 IPO price, PAGP’s stock reflects the need for better execution by management.

CEQP continues to execute well and met with many happy investors given the stock’s climb over the past couple of years. Meetings with Enterprise Products Partners (EPD) and Magellan Midstream Partners (MMP) were typically reassuring. Neither sees the need to convert from their MLP structure.

Enlink (ENLC/ENLK) Chairman Barry Davis described how they were emulating parent company Devon Energy’s (DVN) investment in IT to manage their operations. DVN has a single Data Control Center that remotely monitors all their activities. ENLC has created a task force to find similar opportunities to automate.

“Refracs” (when today’s new technology is applied to a previously fracked well) are delivering some impressive results for DVN in the Barnett shale for around $600K per well. But as in the past, ENLC will benefit as DVN sheds those assets in a region that they don’t deem strategic, to others willing to invest the time and capital. Nonetheless, a play believed to be in decline continues to maintain flat production.

Cheniere (LNG) explained how, in signing up customers for their next export facility, they can guarantee capacity from Sabine Pass as a stop-gap. Producers are sometimes unwilling to make a binding commitment to use new infrastructure when they’re unsure it’ll get built. LNG’s early-mover advantage allows them to guarantee capacity on Train 3 to producers who sign up for yet-to-be-built Train 6, which makes it easier to get customer commitments.

The industry’s fundamentals are good but complaints were heard that questions of structure continue to dominate. Many feel the MLP-only indices are losing relevance, and unanswered questions linger over the future of MLP-dedicated funds such as the Alerian MLP ETF (AMLP) and many mutual funds, since they face a shrinking number of MLPs to hold (see The Alerian Problem).

Next year REITs will apparently be added to the conference, which is relocating to Las Vegas. The conference organizers grasp the need for a broader approach.

We are long CEQP, ENB, ENLC, KMI, LNG, PAGP and WMB. We are short AMLP.