The Varied Uses For LNG

Wells Fargo describes Liquefied Natural Gas (LNG) as THE theme for midstream energy infrastructure. In a recent series of meetings they found investors were “highly constructive on long-term fundamentals for global LNG…and looking for ways to play the theme.”

One reason is that Europe’s pivot on energy security seems unlikely to change regardless of the outcome in Ukraine. The fact and form of Russia’s invasion are immutable. In a brief moment, Russia has shredded the hopes of those who embraced engagement via trade (see Russia Boosts US Energy Sector).

We were bullish on natural gas before the invasion, because its growth prospects already looked good based on growing Asian demand. The possibility that coal consumers around the world might follow the US lead and start switching to natural gas power plants so as to reduce CO2 emissions remains an upside option. 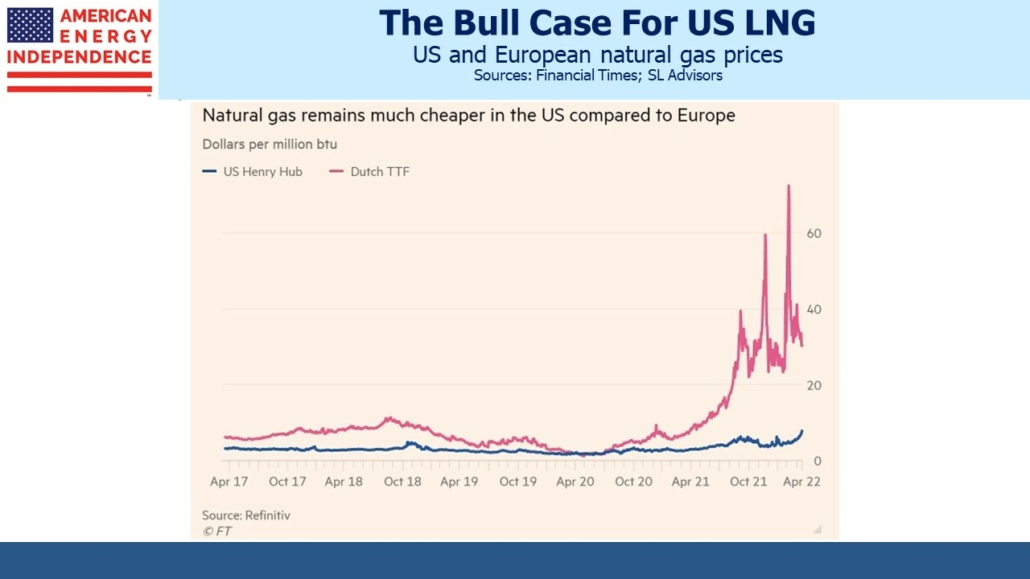 Recent events have drawn more attention to LNG. Spot prices in Europe remain 4X the US and have been double that in recent weeks. The constraint on US exports to Europe isn’t the availability of natural gas, but the export facilities to liquefy it and load it onto LNG tankers. The Financial Times recently warned that building new export infrastructure will take years, meaning price relief won’t come quickly to Europeans.

The long lead time on construction provides decent visibility into future export capacity. Because there’s no Plan B for an LNG terminal, twenty year contracts are common to assure an adequate return on investment. Cheniere is the only pure-play publicly-traded US LNG corporation operating, so investors that are bullish on LNG have limited choices. Cheniere is one of the best Free Cash Flow (FCF) story in the midstream sector. Their capex needs have been falling since 2016 while Cash Flow From Operations (CFFO) has been increasing. Their reduced financing needs have allowed them to pay down over $1BN in debt in each of the past two years. This reduced FCF but is a use of cash likely to make most equity investors happy. 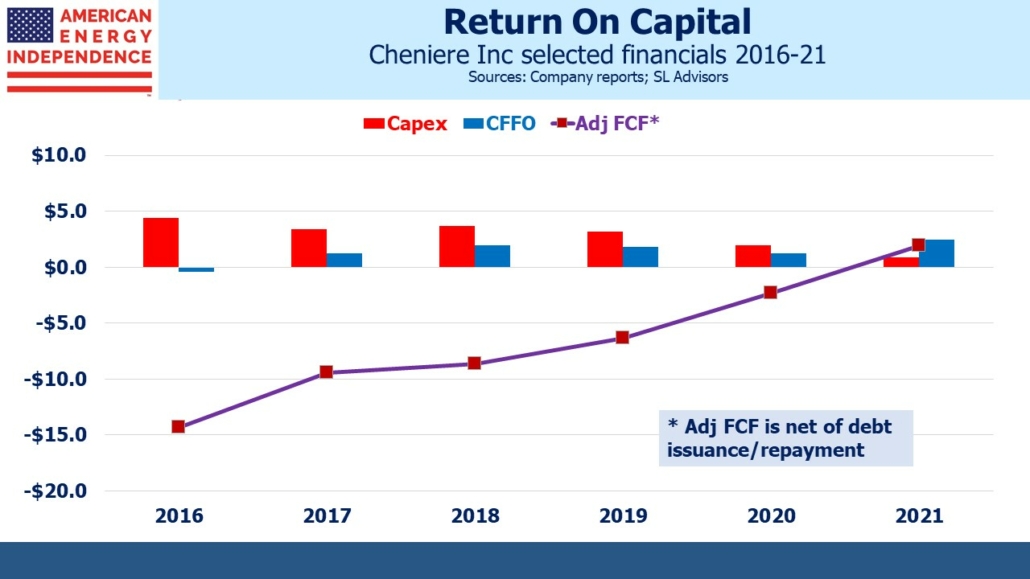 Cheniere’s Executive Vice President Anatol Feygin recently described the natural gas market as undergoing a “demand shock” after years of underinvestment. Not surprisingly, he is very bullish on the company’s prospects.

Although Europe’s need for LNG has spurred the sector higher, Asia is the biggest market. Emerging economies are increasing their consumption of all kinds of energy, from coal to renewables, as they strive to raise living standards. When Asian power plants burn natural gas, they are probably substituting for coal. In fact, the single most constructive thing climate extremists can do is encourage coal to gas switching in the developing world, most especially Asia. China plans to invest $130BN in gas projects. Vietnam, Indonesia and India in aggregate are a further $100BN. Asia’s total capex is estimated to be 3X Europe’s, even with their hurried move away from Russian supplies.

Some are concerned that this locks in fossil fuel use beyond the time when the UN would like to it phased out – but solar panels and windmills aren’t a practical substitute for the size of energy needs these countries envisage.

Export contracts to cover long distances is how most people think of LNG. So RBN Energy published a fascinating description of the surprisingly widespread use of small scale LNG plants (see Piece By Piece – Small-Scale LNG Plants In U.S. Find Niche Markets At Home And Abroad). Needs vary from providing extra natural gas to meet peak demand to industrial use where natural gas pipeline capacity isn’t available. New England’s well known opposition to new gas pipelines has made them especially reliant on regasified LNG. There are even trucks which use LNG – they’re more expensive to operate than Compressed Natural Gas (CNG), so tend to be used for longer distances with limited opportunities to refill.

Although purists would like us to give up all fossil fuels, pragmatism is leading to a growing acknowledgment that energy transitions, including this one, take decades to play out. Energy security, historically not a European concern, has catapulted up their priorities.

NextDecade, on which we have written several times recently (see NextDecade Sees A Bright Future), and Tellurian, are among the few LNG stocks available for investors who find Cheniere expensive. Wells Fargo believes what they call the, “highly constructive long-term fundamentals” along with limited choices will keep these names well supported.

Concern about high oil and gas prices has even induced the White House to reverse one of their first steps and permit drilling on Federal land. They’ve managed to offend progressives. But by increasing the royalties by half, to 18.75%, they’re still encouraging caution among energy executives. They know the hand of friendship to traditional energy will be withdrawn as soon as prices drop. But even here, pragmatism is supporting the case for natural gas.