The Fed’s Narrowing Definition Of Inflation

The ascent in lumber prices is the most spectacular of many commodities that reflect the pandemic recovery. Recently a general contractor I know lamented that the wood for his typical newbuild construction had doubled over a few months.

High lumber prices are not only caused by booming suburban real estate markets — new household formations are up too. Although the monthly figures reflect a sharp jump last summer followed by a drop, smoothing out the fluctuations reveals a clear increase in the underlying trend.

Stinson Dean, Deacon Lumber CEO, also blamed Canada’s decision several years ago to reduce the amount of lumber harvested from western forests, to levels believed to be more sustainable over the long term. 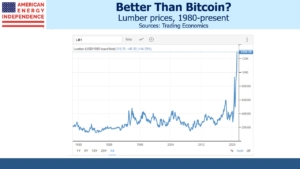 Lumber is experiencing inflation. But like most items that are rising in price, it won’t bother the Fed. That’s because lumber doesn’t show up directly in the CPI or the PCE  (the Fed’s preferred measure), which are both indices of finished goods and services (lumber is included in PPI). Since house prices (a finished good) are rising in part because of lumber, one might assume it’ll show up there. But house prices aren’t in CPI or the PCE Index either – because a house is an asset, and the Bureau of Labor Statistics (BLS) is trying to measure the cost of shelter, the service a house provides (see Why You Can’t Trust Reported Inflation Numbers). 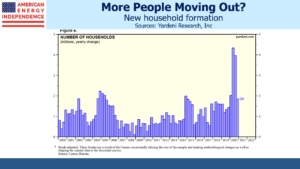 Owners’ Equivalent Rent (OER) is how the BLS measures the cost of shelter afforded by home ownership, by surveying homeowners on how much they think they could receive by renting out their house. In theory, rising house prices should induce higher rents, but the OER estimates the BLS obtains move improbably without regard to home prices. In any event, if OER did jump, as the only non-cash item in the CPI it’s implausible that monetary policy should ever respond to it. Nobody ever pays OER, and homeowners can’t spend it. OER is an obscure and meaningless concept, only loved by the BLS statisticians who invented it.

Inflation indices also incorporate quality improvements as price decreases, since more value for the same price is equivalent to a price reduction. The “Telephone hardware, calculators, and other consumer information items” component of CPI has fallen at a 9.8% compound annual rate for the past decade. In 2011, the iPhone 4S retailed for $660, compared with around $1,000 for an iPhone 12 today. They are dramatically different devices – due to its greater functionality,  the newest iPhone enters the CPI as a price cut, even though it costs more. This is how inflation indices are designed to work, although most find it counterintuitive.

Published inflation figures have little in common with consumer expenses. The Fed has long dismissed changes in food and energy because they’re volatile. They’ll ignore price hikes in many consumer products, including those announced recently by Procter and Gamble, Kimberly-Clark, Hormel Foods and JM Smucker.

The Fed is prepared to ignore inflation in most areas of the economy, except for one — rising wages, nowadays the only source of inflation that could justify a policy response. Their twin mandate, defined last week by Fed vice-chair Richard Clarida, is, “maximum employment as the highest level of employment that does not generate sustained pressures that put the price-stability mandate at risk.” In other words, maximize employment until labor shortages cause wages to rise. As he noted in his speech, estimating the natural level of unemployment, beyond which further employment gains are inflationary, is a “long-studied topic” not currently resolved.

So the Fed will want to see wage inflation as confirmation that the natural rate has been achieved. Today’s 6% unemployment rate is still only back to the levels of late summer 2014. It reached 3.5% in February of last year, with no discernible impact on wage inflation, before the pandemic hit.

Last summer the Fed revised its operating model to target 2% inflation through a cycle, meaning they would now tolerate inflation somewhat higher at times. Because real interest rates have been falling for many years, this was a recognition that a lower equilibrium short term rate (because of falling real rates) provides less room to cut rates in a recession. Hence the explicit willingness to tolerate “inflation moderately above 2 percent for some time in the service of keeping longer-term inflation expectations well anchored at the 2 percent longer-run goal.”

The Fed’s evolving posture reflects a thoughtful response to changed circumstances and their dual mandate. When inflation rises, communicating their objectives will be complex and will draw criticism. But it’s clear they’ll be late in tightening monetary policy, and because tardiness is an explicit objective, markets may conclude the Fed is beyond simply sociably late.

Inflation expectations remain anchored close to 2%, although they’re trending higher. At some point the Fed may be caught between the market’s concern about rising inflation and the absence of wage inflation that would confirm the natural employment rate had been reached. When this happens, they’ll still be buying $120BN or so of government bonds every month. It could be more if to that point they’ve assessed rising bond yields as imposing unnecessarily tight conditions rather than reflecting investors’ pricing in greater risk.

Persistent bond buying, a slow monetization of Federal debt, represents the most vulnerable element of the Fed’s posture. They could easily have justified withdrawing such support as the size of the fiscal response to Covid became apparent. They are now left with no elegant exit strategy. It’s becoming a narcotic. Bond yields globally are already so low, they are scarcely impeding the recovery. The Fed’s new policy framework will test their communication skills. It will offer a fascinating spectacle.

Inflation, even as measured by the BLS with its shortcomings and downward bias, is heading higher. The Fed and Congress (see Democrats Will Test The Limits On Spending) have synchronized their policies with this same objective in mind. Investors should position their portfolios accordingly.