The Fed’s In No Hurry

In Fed chair Jay Powell’s closing speech from the virtual Jackson Hole symposium he went to great pains to illustrate that currently elevated inflation is transitory. He compared the strong rebound in spending on durable goods to above its pre-Covid trend with services spending, which remains 7% below its pre-Covid trend. He noted the unevenness of the recovery from the shortest, sharpest recession in history.

Jay Powell remains convinced that inflation will moderate, and surveys of inflation expectations can be interpreted as supporting this view. Market forecasts of inflation derived from treasury securities have moderated recently. With the Fed is buying over half of new treasury supply, market rates are far from being set freely (see Behind The Fed’s Benign Inflation Outlook).

Since the FOMC believes the bond market is still in need of their support, they must also believe that yields would otherwise be higher. If so, they should draw scant comfort from such inflation expectations, but the Fed nonetheless relies on this circular argument for comfort. The University of Michigan Consumer Survey has not yet shown signs of moderating. 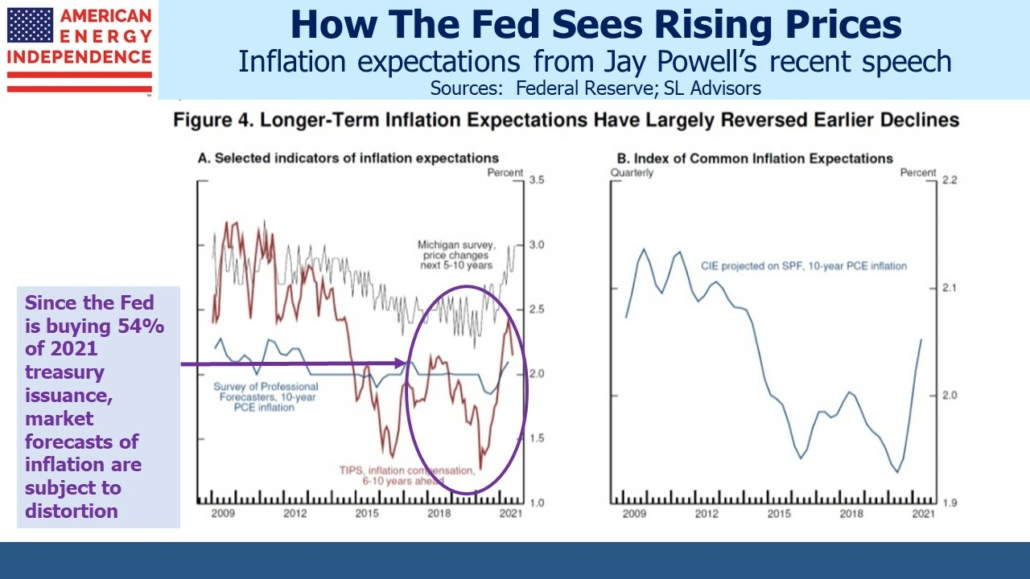 Towards the end of his speech. Chair Powell briefly reviewed the experience from 1950 to the early 1980s, a period that, “taught monetary policymakers not to attempt to offset what are likely to be temporary fluctuations in inflation.”

It’s hard to be sure that anything is permanent until it’s continued for a long time, including higher inflation. This stance is provoking criticism. “The Fed has tied its hands to be quite late to remove monetary-policy accommodation,” says William Dudley, former president of the New York Fed in a recent Economist article.

This is an unfortunate moment for the Fed to be implementing its new doctrine, revised following last year’s Jackson Hole symposium, of being more tolerant of higher inflation and therefore more reactive. History offers policymakers scant insight into how economies emerge from a pandemic. 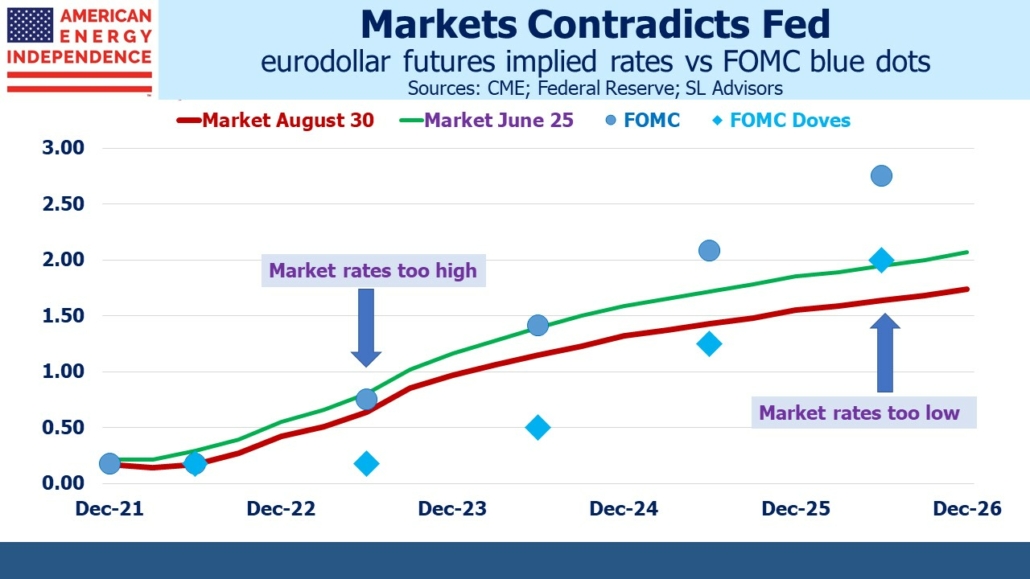 Inflation may conform to the Fed’s benign outlook. If it doesn’t, the cause will be partly traced to Congress. Budget deficits of above $1TN will soon become the norm. While this year we’re on track to hit $3TN before falling sharply, the CBO forecasts deficits will begin increasing again by 2025. The President’s current budget proposal will add $12TN to the deficit over the next decade. This is why the Fed is likely to remain a significant buyer of US treasuries.

A Fed with a more acute sense of risk would use this relentless fiscal stimulus to support a hastier return to more normal monetary conditions. Congress has adopted Modern Monetary Theory (MMT, aka the  Magic Money Tree) philosophy of guilt-free largesse (see Democrats Will Test The Limits On Spending). Continued monetary stimulus leaves little room for error if the Fed’s inflation outlook turns out wrong.

Financial markets are embracing a more dovish Fed by pushing down the yields on eurodollar futures two years out and longer. Oddly, the market still expects one tightening of monetary policy by the end of next year, even while rate forecasts farther out have sunk below even the most Dovish FOMC members’ blue dots.

A reduction of bond buying, even if it begins in September, will likely mean the Fed’s balance sheet will continue to grow at least into 1Q22. In his speech last week, Powell said that, “…we will continue to hold the target range for the federal funds rate at its current level until the economy reaches conditions consistent with maximum employment…” He also noted that, “In the United States, unemployment ran below 4 percent for about two years before the pandemic, while inflation ran at or below 2 percent. Wages did move up across the income spectrum.”

From these statements it’s clear the Fed won’t raise rates until the unemployment rate is solidly below 4%. It’s likely they will await evidence of wage inflation before concluding full employment has been reached.

Everything about this FOMC argues for sloth-like policy normalization combined with a high roller’s embrace of substantial risk of a policy error. This is all to ensure that everyone who wants a job has one. Among the papers distributed to Jackson Hole attendees was Monetary Policy in Times of Structural Reallocation. Powell has argued that inflation has been caused by disruption of supply chains induced by Covid. The inference is that some corporations will need to restructure their logistics to accommodate a new world where lockdowns can occur with little notice. Once done, price hikes due to supply disruptions should dissipate.

The paper posits that higher inflation allows greater variation in real wages, which can hasten such restructuring. Since wages rarely shrink in nominal terms, higher inflation can accelerate the movement of workers to more logistically-efficient jobs. Inflation and wage hikes of 5% in growing sectors combined with low or zero nominal wage growth in shrinking ones would quickly widen real wage differentials, motivating workers to switch jobs accordingly. Higher inflation allows for a bigger drop in real incomes – getting a 1% raise with 5% inflation is a 4% cut in real wages, something not easily achieved with, say, 2% inflation.

Jay Powell didn’t broach the topic, but a dovish, risk-tolerant Fed focused on its employment mandate might find elements to like in such an approach. 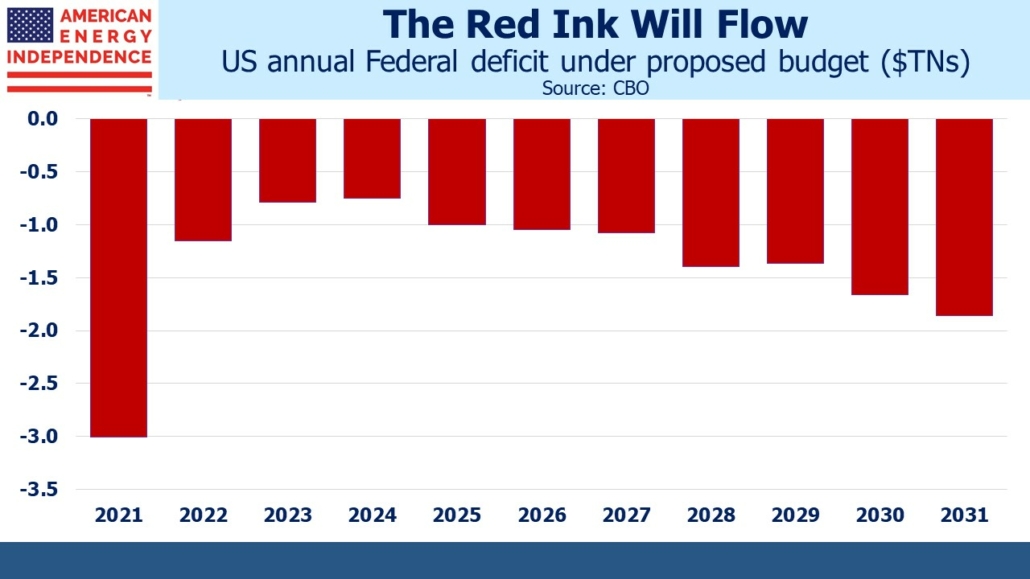 There seems little reason for interest rate futures to plot a different course than the FOMC’s own dot plot – the odds of monetary tightening next year are receding. Circumstances may evolve to compel the Fed to “… respond and use our tools to assure that inflation runs at levels that are consistent with our goal.” If so, rates will eventually need to move higher than is currently priced in. That remains some way off.

To learn why you should worry about inflation, watch this brief video.