Amid the more hawkish Fed and consequent sharp drop in the market, the jump in real yields has not drawn much attention. The rise in ten year yields came with inflation expectations remaining well anchored at around 2.75%. TIPs yields rose with nominal ones.

Factset earnings expectations don’t yet reflect the pessimism of public company CEOs, the majority of whom expect a recession within 12-18 months. That view relies on the expectation that the Fed will tighten excessively in their zeal to control inflation. 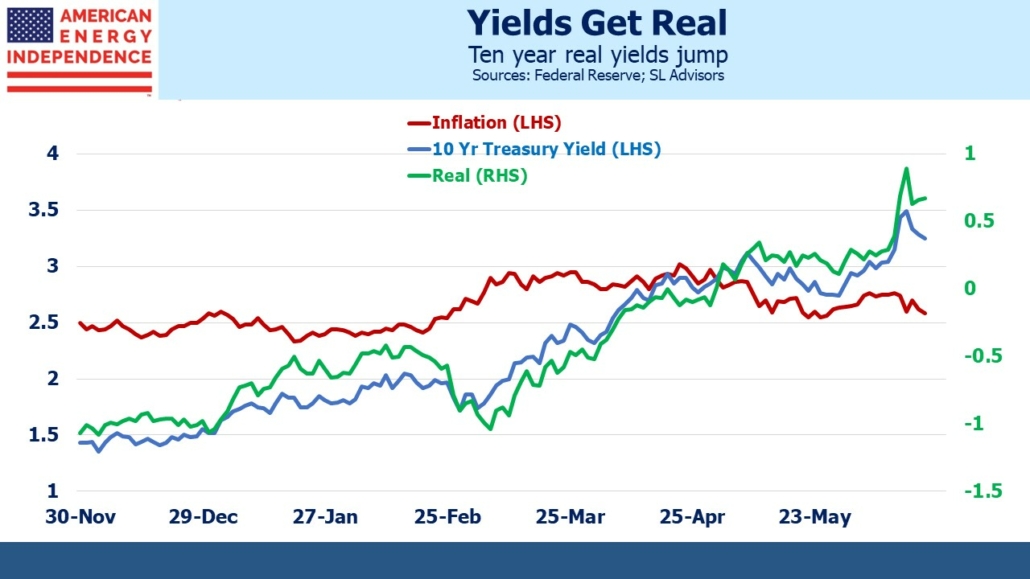 It’s a fascinating problem trying to predict the FOMC’s actions. Warren Buffett often responds that he never considers the economic outlook when analyzing investments, but some of these CEOs presumably do when making capital allocation decisions. 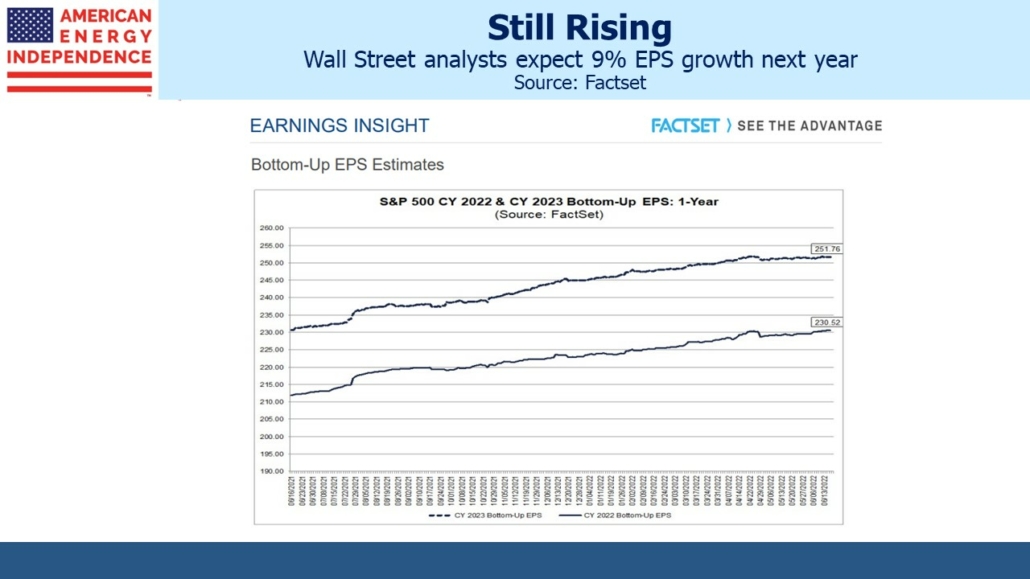 Meanwhile, the eurodollar futures curve has steepened somewhat but also has an increasing gap between yields five years out and longer compared with the FOMC’s equilibrium rate. The Fed’s latest projection materials show the median member’s forecast at 2.5% for the neutral policy rate. Futures markets have it closer to 3.25%.

It reminds of the Fed’s past poor record at forecasting (see from 2019 Bond Market Looks Past Fed). For many years after the great financial crisis of 2008-09, the bond market implied lower rates than the Fed. The bond market was right. Today circumstances have reversed, and interest rate markets are forecasting a higher neutral rate than the FOMC. 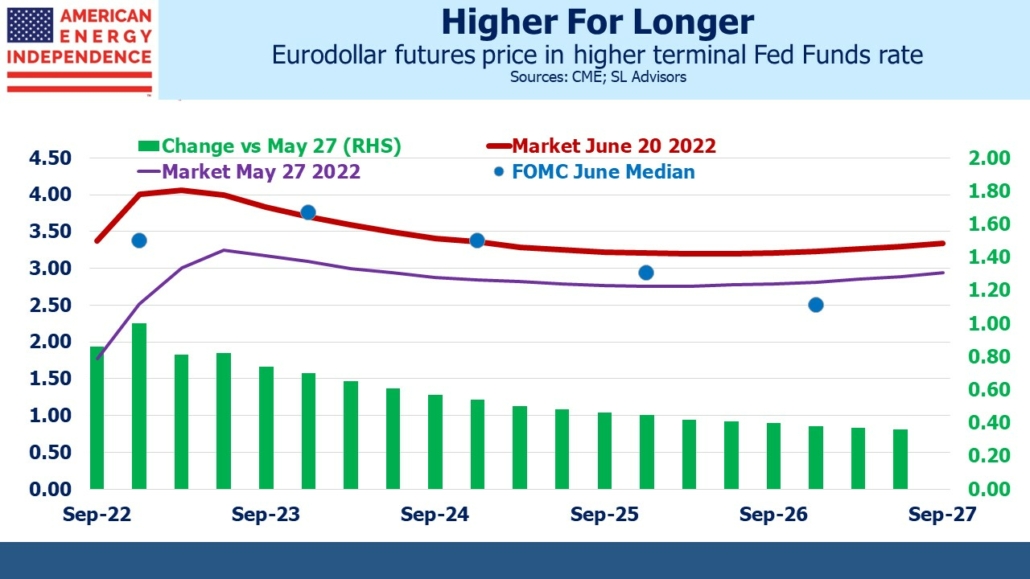 This is likely to be correct because the Fed’s reinterpreted mandate favors maximizing employment over stable prices. Therefore, inflation is likely to remain above their 2% target because they’ll be wary of the recessionary risk of extended tighter policy. Raising rates with inflation at 8% is not controversial. When unemployment is in the mid 4%s and rising while inflation is at 4% and falling is when the Fed will more clearly need to consider the employment/inflation trade-off. Even with the Fed moving at 0.75% increments, the 4% rate cycle peak represents little if any premium over then current inflation.

Today’s market prices support this view. So there’s some asymmetry every time important economic data is released, such as the employment report on the first Friday of the month. Signs of weakness will likely drive two year treasury yields lower and the market to anticipate the Fed moving to neutral or slower pace of rate hikes. 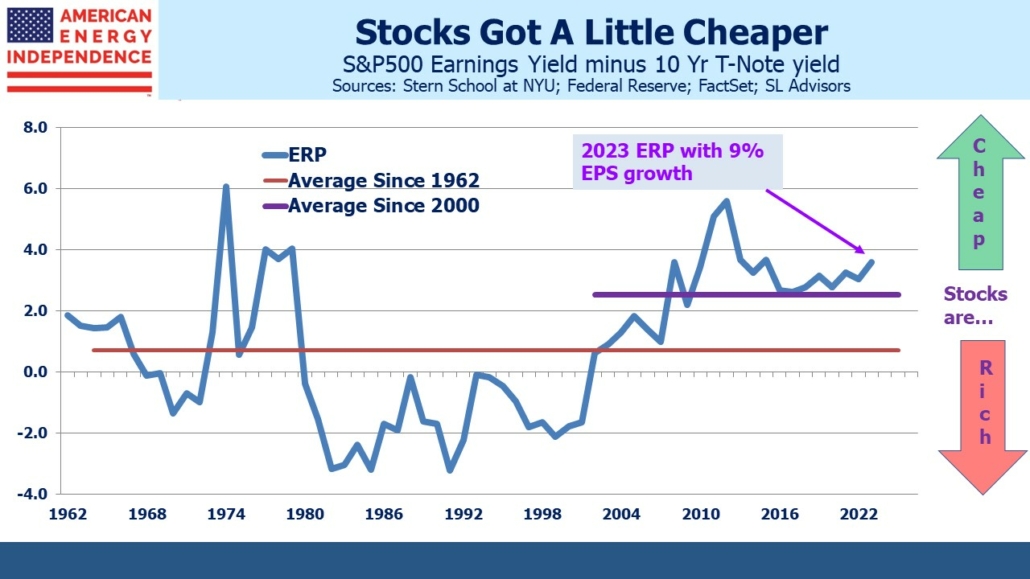 Coupled with this, the Equity Risk Premium (ERP) is starting to favor stocks again. Just two months ago we noted that the market wasn’t that attractive compared with bond yields (see Criticism Of The Fed Goes Mainstream). Since then, stocks have slumped 15%, and even though interest rates have risen stocks are more attractively priced. Bottom-up 2023 S&P500 earnings assume 9% earnings growth, which puts the ERP at 3.5, comfortably wider than its 2.5 two decade average. Even though ten year yields have been rising, bond prices seem to be permanently supported by return-insensitive holders (central banks) and rigid investment mandates (pension funds). The ERP is only likely to favor fixed income over stocks when the market is truly frothy – not its present state.

If soft economic data causes investors to price in a more moderate Fed, the equity market is poised for a strong rally.

A couple of weeks ago when I was on The Compound and Friends, Josh Brown’s weekly interview that’s published on Youtube, I suggested that we might look back at this period as the good old days. Josh and his co-presenter Mike Batnick were shocked. “There’s nothing more scary than a pessimist with a British accent” became that episode’s trailer. I explained my point, which is that although criticism of the Fed flows freely, they have achieved full employment – if anything they’ve over-achieved it.

Apart from those heavily invested in the energy sector, inflation is making many feel poorer since real incomes are falling. But at least everyone is coping with higher prices with a job. A few million people will need to lose theirs in order to reduce inflation for everyone. When that happens criticism of the Fed will take on a different form. If one policy error (a slow response to inflation) is followed by another (a recession caused by over-responding to the first), Powell’s congressional appearances will become uncomfortable.

That analysis is why it’s worth betting on the Fed claiming a premature victory over inflation. They can’t afford consecutive policy errors, so inflation is unlikely to return to their 2% target. Pipeline stocks have endured a sharp fall this month, but the strong fundamentals remain intact, and dividend yields have moved a little higher with the sell-off. In our opinion midstream energy infrastructure is attractively priced.