Anyone who’s visited Felixstowe on England’s windy east coast knows that umbrellas enjoy a brief existence in offering protection from the rain. Farther north off the coast of Scotland, the North Sea is one of earth’s most hostile places to drill for oil. Gales are common. Working an oil rig isn’t for the nervous.

Consequently, the North Sea is an obvious location for windfarms. Last year Britain obtained almost a quarter of its electricity from wind, a key element in the country’s drive to reduce CO2 emissions. But even the North Sea isn’t always windy, and a recent period of relative tranquility has caused havoc to European markets for electricity. 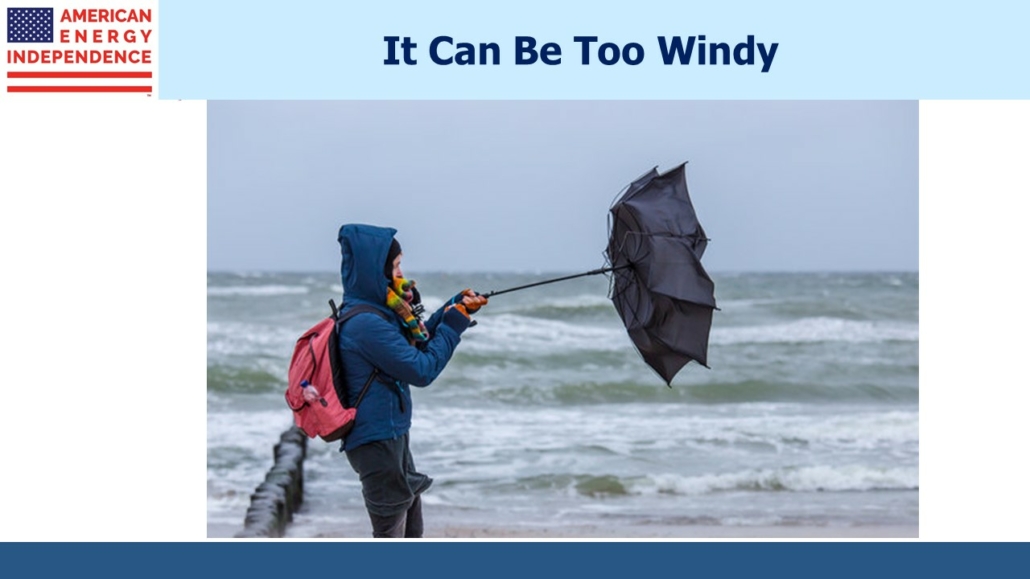 Renewables clearly have their place, but the problem of their intermittency increases with their share of power generation. They’re also non-diversified – ten gas-burning power plants operate independently with downtime at one unlikely to affect the others. But if it’s not sunny or windy, a region’s entire renewables supply can be rendered inoperative. One indicator of a grid overly reliant on unreliable power is sharp spikes in electricity prices. 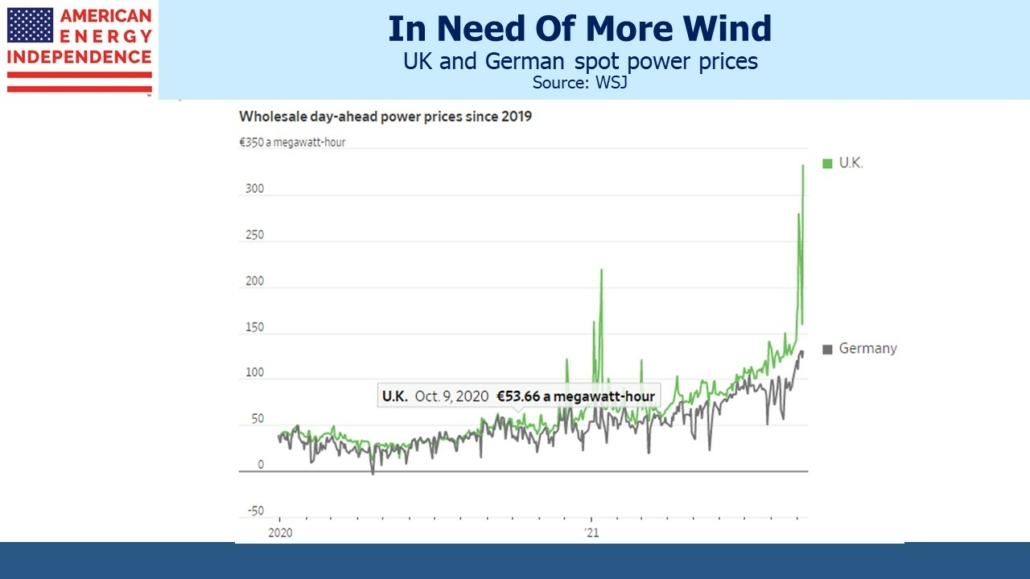 Wholesale electricity prices one day ahead (in effect, the spot market) soared to €331 per Megawatt Hour (MWh) in the UK recently. It’s priced in Euros not Sterling because the UK grid sometimes imports electricity from France or the Netherlands. Britain had to restart gas and coal burning power plants, including one in Nottinghamshire that will be permanently closed by 2024 when the government has committed to phase out coal completely.

There was a ripple effect into European markets. But there are reasons to think this recent price spike is not just a temporary result of unusually calm North Sea weather. In Germany, one year ahead baseload power prices continued their ascent and reached a new thirteen-year high. 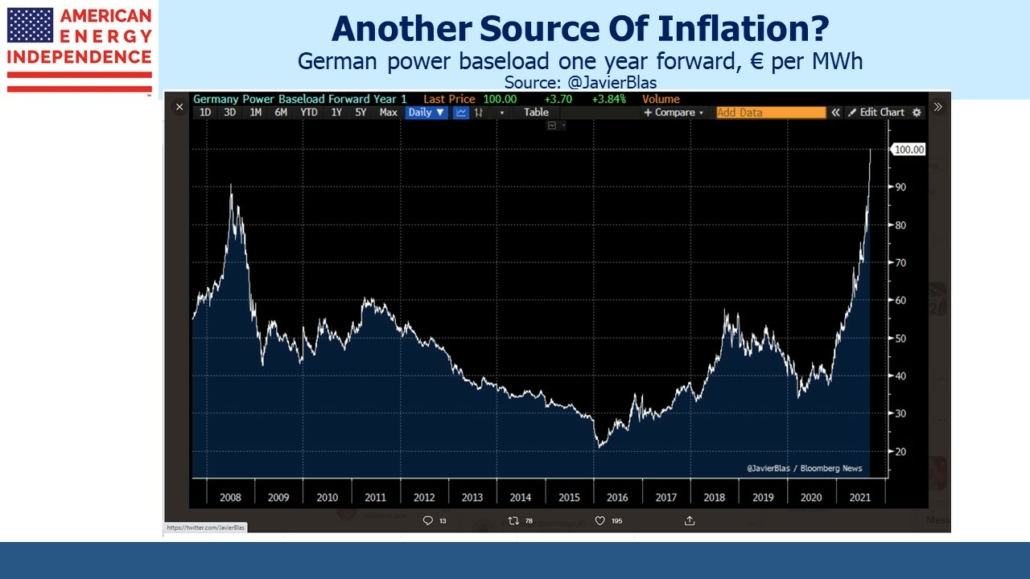 German household electricity prices are already the world’s highest, more than double the US and four times China. There are a couple of lessons here – the first is that western societies will clearly tolerate much higher energy prices than we have in the US. Environmental extremists continue to disingenuously promote renewables as cheaper than conventional power. But the biggest users, such as Germany or California, have the highest prices. 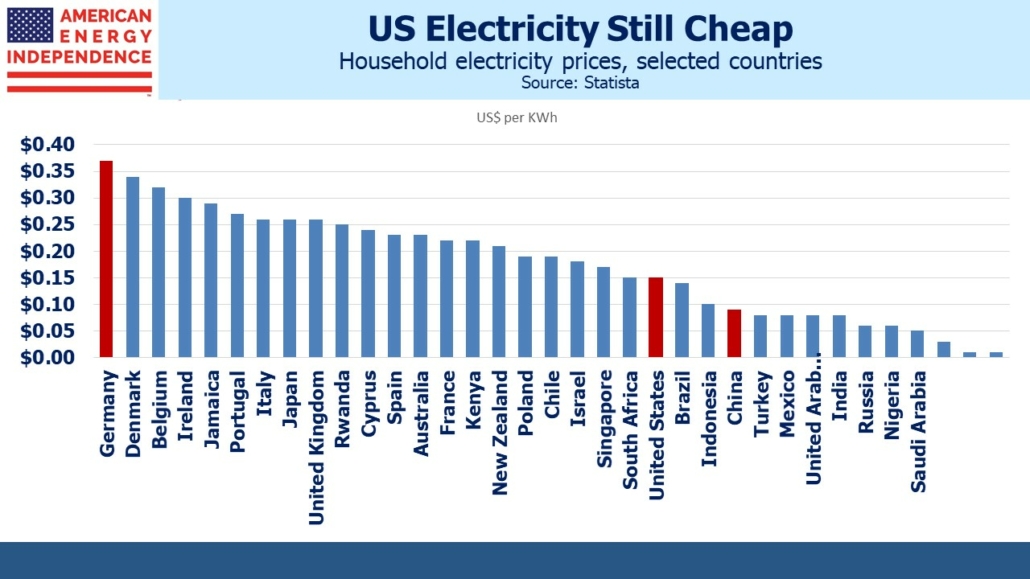 The second lesson is that it’s implausible for China to wish to emulate OECD countries’ electricity cost structure. Their commitments on emissions reductions aren’t credible. Progressive Democrats seem to think that with solar and wind the US can alter the climate alone and lower prices. Instead, they should be honestly promoting much higher energy prices as easily affordable and worth paying for. They should also be advocating to confront China on its hollow CO2 commitments.

Less wind in Europe has boosted demand for natural gas, including imports of Liquified Natural Gas (LNG) from the US (see The Bull Market in Natural Gas). This has pushed up domestic natural gas prices to such an extent that the US Energy Information Administration expects gas to provide 35% of power generation this year and 34% in 2022, down from 39% last year. 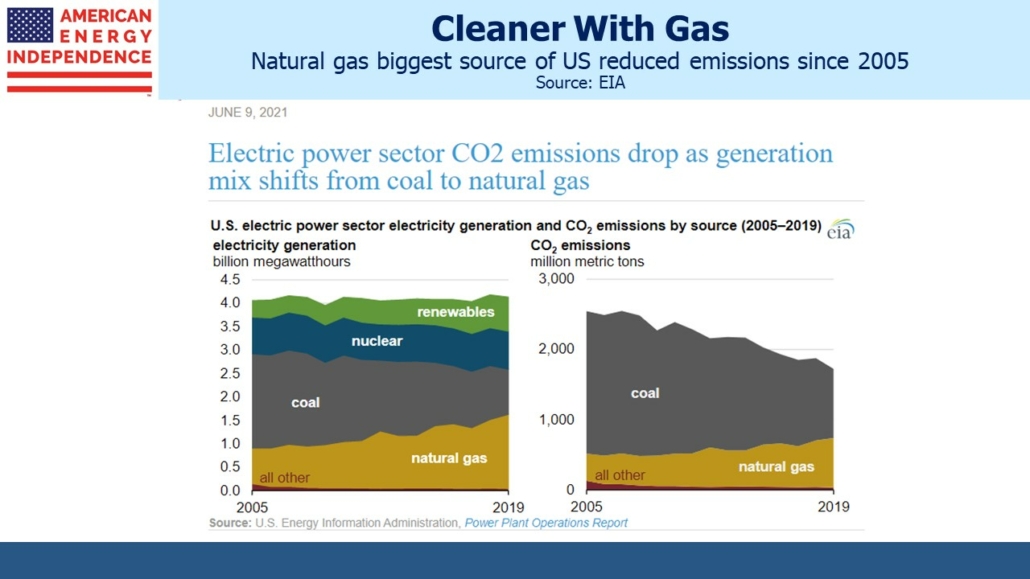 Coal-to-gas switching has been the biggest source of reduced US emissions over the past fifteen years. Although solar panels and windmills get all the attention, actual progress has come about through increased use of natural gas. The Shale Revolution may not have delivered promised investment returns, but the abundant and cheap natural gas that resulted have driven our CO2 emissions down.

US coal production has been in steady decline for over a decade. Connected global energy markets have created a link between a windless North Sea and increased US coal demand.

OPEC also revised up their forecast for 2022 global crude oil demand, which they now expect to eclipse the 2019 pre-Covid level of 100.3 Million Barrels per Day. It’s more proof that the world will use more of all energy sources in the years to come.