The Bubble Was In ARKK’s Arc, Not Value Stocks

It’s easy to sympathize with Cathie Wood’s plaintive cry that value stocks look like a bubble. As long-time energy investors, we’ve watched awestruck as the ARK Innovation ETF (ARKK) traced out its stratospheric path for both performance and AUM. “Bubble” was a wholly inadequate sobriquet (see ARKK’s Investors Have In Aggregate Lost Money).

Having reached its apogee, there is now no pleasure in watching ARKK’s Icarus-like plunge. Pipeline investors were there a little over two years ago, when a sector that looked ridiculously cheap lost over half its value as Covid ravaged the energy sector. 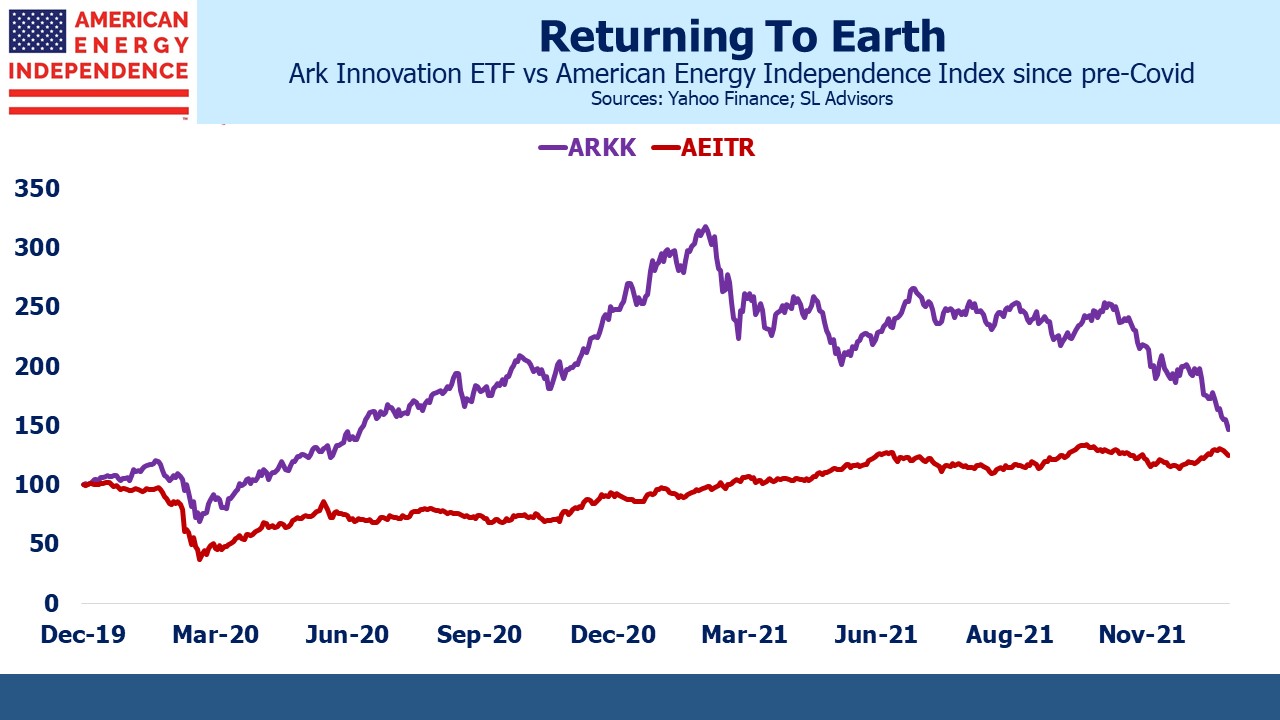 We have no view on ARKK’s holdings, and little more to say on value stocks outside of energy, where we have much to add. Although momentum is extending the recent moves of ARKK and the pipeline sector, valuations of the latter provide ample justification for this to continue.

An overly exuberant Shale Revolution, the looming uncertainty of the energy transition and Covid’s demand destruction were the adverse trifecta that floored sentiment around traditional energy. April of 2020, when crude oil went briefly negative, represented a nadir of sentiment and valuation so severe it likely surpassed anything that came before.

The recency of such trauma continues to impose caution on prospective investors, allowing valuations to remain attractive. Flows into the sector are once again positive. Bubbles do not follow with such relative haste as Cathie Wood implies.

Industry capex appears parsimonious against the standards of five years ago, provoking incongruous pleas from the White House to produce more of something they claim to want phased out. CEOs such as Pioneer’s Scott Sheffield maintain that investors don’t want production that isn’t accretive on a per share basis. It took the last few years to convince them, but capital discipline remains the industry’s new religion.

An example is the growing spread between Distributable Cash Flow (DCF) and Capex. DCF is cash from operations minus maintenance capex (the cost of maintaining existing assets). Capex on new projects is down by almost two thirds for pipeline companies, similar to the reduced spending by E&P companies who are their customers. Many investors may be skeptical that such frugality will persist, but as Scott Sheffield’s comments show, financial performance is now more important than production growth. 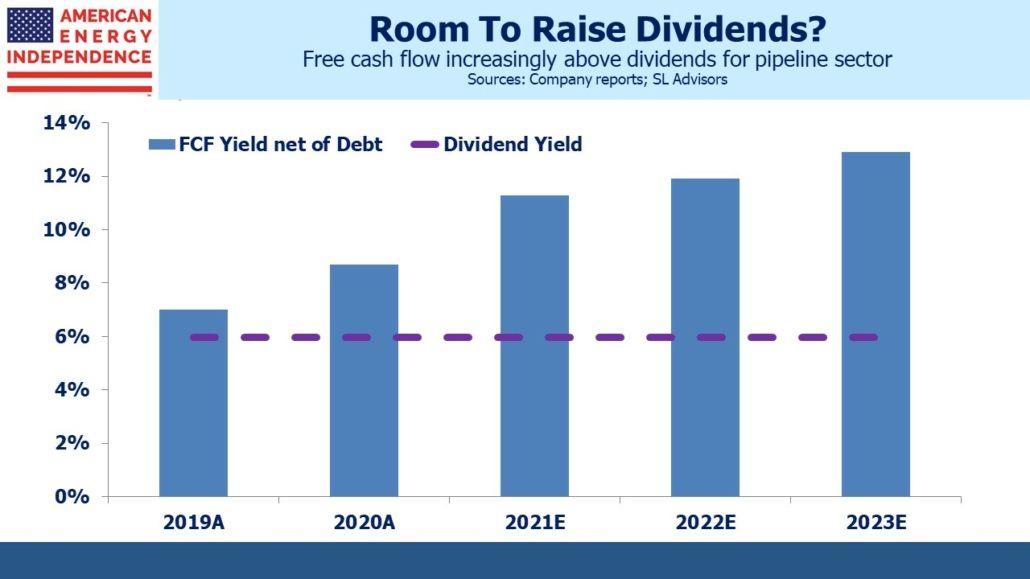 Free Cash Flow (FCF) is being boosted by the DCF-Capex spread. Sources and uses of funds is an important variable. In projecting FCF we’ve assumed that half of growth spending is debt-financed, which would still allow leverage to continue decreasing while increasing payout coverage. We’ve made no assumptions about dividend hikes or buybacks, which are hard to forecast more than a year out.  Both may trim FCF growth, but since these represent a direct return of additional cash to investors there would be little to complain about.

Increased capital discipline is occurring simultaneously with energy policies intended to inhibit supply growth. Political leaders routinely draw on professed public concern about climate change to provide legitimacy for related policies. However, there seems to be little political appetite to limit demand for reliable energy. The focus remains on the supply side, as if the energy transition can be painless to consumers with the disruption only on big corporations.

The result is that continued demand growth and constrained supply are boosting prices for natural gas, crude oil and even coal. Progressive policy prescriptions have failed to meaningfully impact emissions – but they have served to highlight the challenges of intermittency with renewables, inadvertently improving the outlook for traditional energy companies.

Emerging countries favor raising living standards over fighting global warming, and the most impactful step the world could take would be promoting natural gas over coal for power generation.

Moreover, midstream energy infrastructure companies will mostly own and manage the infrastructure needed for carbon capture, where increased Q45 tax credits enjoy bipartisan support. If hydrogen use becomes commercially viable, the same companies will manage that. In short, rather than threatening the pipeline sector, the energy transition is turning out to be impossible to execute without it.

Any economic threat posed by Covid has long since passed – the collapse in stocks like Peloton and Netflix shows that lockdown spending is dissipating as normalcy returns.

The result is that all three headwinds that hurt investment performance in midstream energy infrastructure have been converted to tailwinds. Meanwhile, valuations remain compelling. If some sellers of ARKK are fleeing to pipelines, they are drawn by the positive fundamentals listed above. They’re abandoning what was clearly a bubble in favor of solid fundamentals.