People may disagree on whether this Fed is hawkish or not, but reactionary is not a controversial adjective. They first demonstrated this in waiting eighteen months after the Covid vaccine and fifteen months after the last $1.9TN slug of fiscal uber-stimulus to roll back their monetary accommodation. Quantitative Easing (QE) is more aptly followed by Qualitative Tightening (QT*), since they regard the inverse of bond buying as letting holdings mature as opposed to auctioning their MBS holdings.

Mortgage yields have reached 6.5% and stocks have entered a bear market. The Fed’s projection materials show PCE inflation falling sharply next year to 2.6% and 2.2% by 2024. They have revised up their forecasts for interest rates and the unemployment rate. The FOMC is now more clearly warning that jobs will be lost in the effort to vanquish inflation. Perhaps smarting from earlier criticism that their forecasts were implausibly optimistic, the latest set is an improvement.

The next test will come when unemployment begins to rise. A Fed chair that regularly cites high minority unemployment as a concern is unlikely to draw much pleasure from job losses. When inflation and the unemployment rate head down/up respectively, the FOMC will be looking for an opportunity to declare victory.

Their projections already forecast victory, waiting for the time when monetary policy no longer simply reacts to current data rather than anticipating the lagged effect of its actions. Signs of economic weakness will cause traders to reassess the path of monetary policy.

Pipeline stocks fell substantially more than the market, with the American Energy Independence Index (AEITR) down 15.9% so far in June versus –11.1% for the S&P500. Weakness in crude oil and higher interest rates are the proximate cause. Natural gas and natural gas liquids are a more important driver of midstream infrastructure profits, and their demand outlook remains strong.

An overlooked feature of pipeline contracts is that they often include tariffs that are linked to PPI. This will begin to show up in quarterly earnings for several companies in later quarters. YTD the AEITR is +10.2% versus the S&P500   –22.3%. The AEITR made its high as recently as June 2 and has fallen 15% since then. Painful, but unlike the broader averages not a bear market. Russia steadily reducing natural gas supplied to western Europe serves as a reminder that the path to EU energy security runs through the US.

Exxon Mobil offered a mature response last week to the President’s seething incoherence, which is what passes for White House energy policy nowadays. Exxon offered some practical suggestions, such as relaxing Jones Act constraints that prevent foreign-owned vessels from transporting cargo between US ports. Consistent policy support for the development of domestic oil and gas assets, along with “streamlined regulatory approval and support for infrastructure such as pipelines” are sensible moves the oil supermajor reiterated.

We spent last week traveling Texas (Houston, Austin and San Antonio). The president’s criticism of the oil industry finds few fans there, where signs of a booming economy are everywhere. In NJ my high five to the gas pump attendant when the register hits $100 has not been widely copied. However, I suspect in Houston I’d find many adherents, although you pump your own gas and it’s still available at $4.60 per gallon. 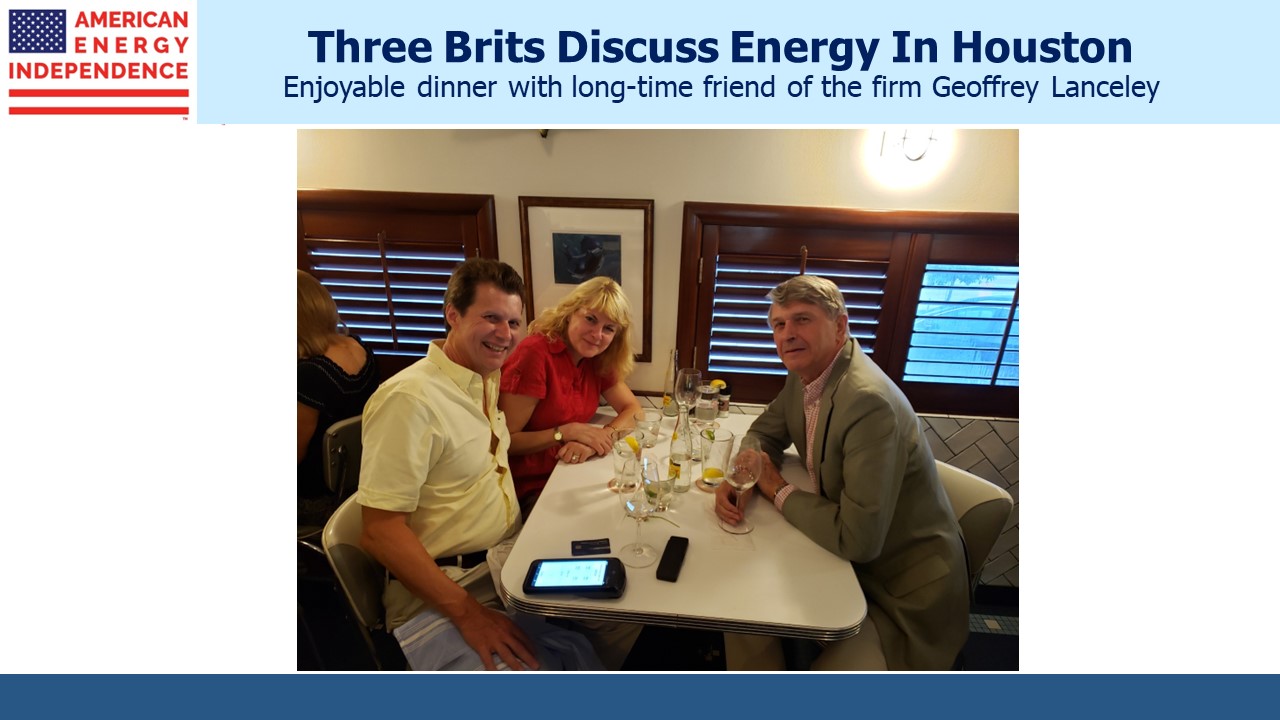 In Houston it seems that everyone moved there from someplace else and southern accents are less common than you’d think. We had dinner with long-time client Geoff Lanceley whose career on the finance side of energy took him from Derbyshire, UK to Iran and Scandinavia before he settled in Houston in the 1970s.

Who knew that the first experiments with fracking saw a frustrated driller toss explosive down a dry well in a final attempt to find oil before sealing it with concrete. It didn’t stop there. In Russell Gold’s The Boom, the author recounts that from 1969-73 the US government set off several nuclear bombs underground in unsuccessful attempts to recover natural gas.

Geoff Lanceley also reminded us that the Houston Ship Channel traces its origins to Houston merchants dissatisfied with the terms demanded by the port of Galveston in the 1850s, who therefore developed alternative access to the Gulf of Mexico. The energy business is seemingly part of every Texan’s life.

Austin is enjoying a boom. It’s fueled more by Californian tax-exiles than energy prices.  It’s impossible to stroll through this normally walkable city without encountering construction and closed sidewalks on virtually every block. Delay your visit until it’s done. 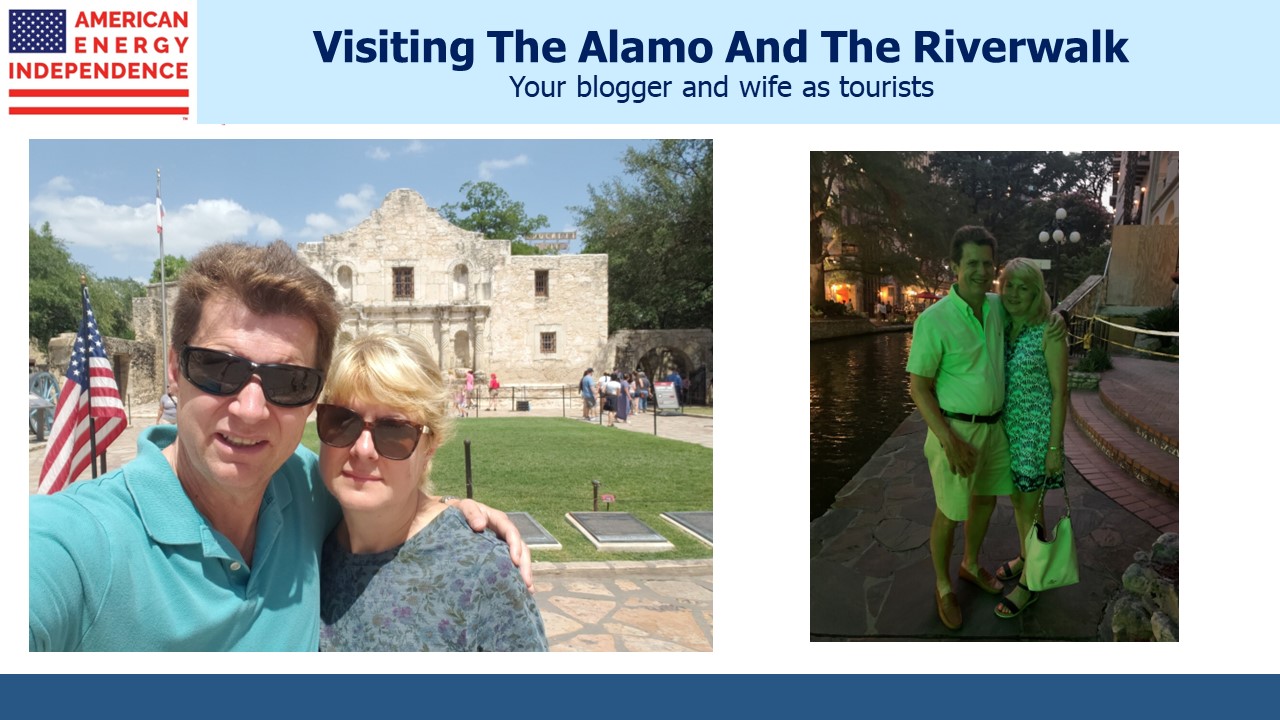 Texas was enduring a heatwave which intensified as we made it to San Antonio. The Riverwalk, a delightful stretch of restaurants and stores, is a different city from the one at street level. We had a most enjoyable dinner with friends and clients Bill and Lisa Edwards. Bill is a retired orthopedic surgeon who still consults and teaches.

We first met over 20 years ago in Vail where Bill was our assigned ski instructor. Countless annual visits have followed. He’s taught our son and younger daughter. This was our first time together away from the thin air of Vail Valley (altitude 8,100 feet and higher). Any skiing competence I demonstrate is to Bill’s credit, and somehow every year I leave him believing I have improved. 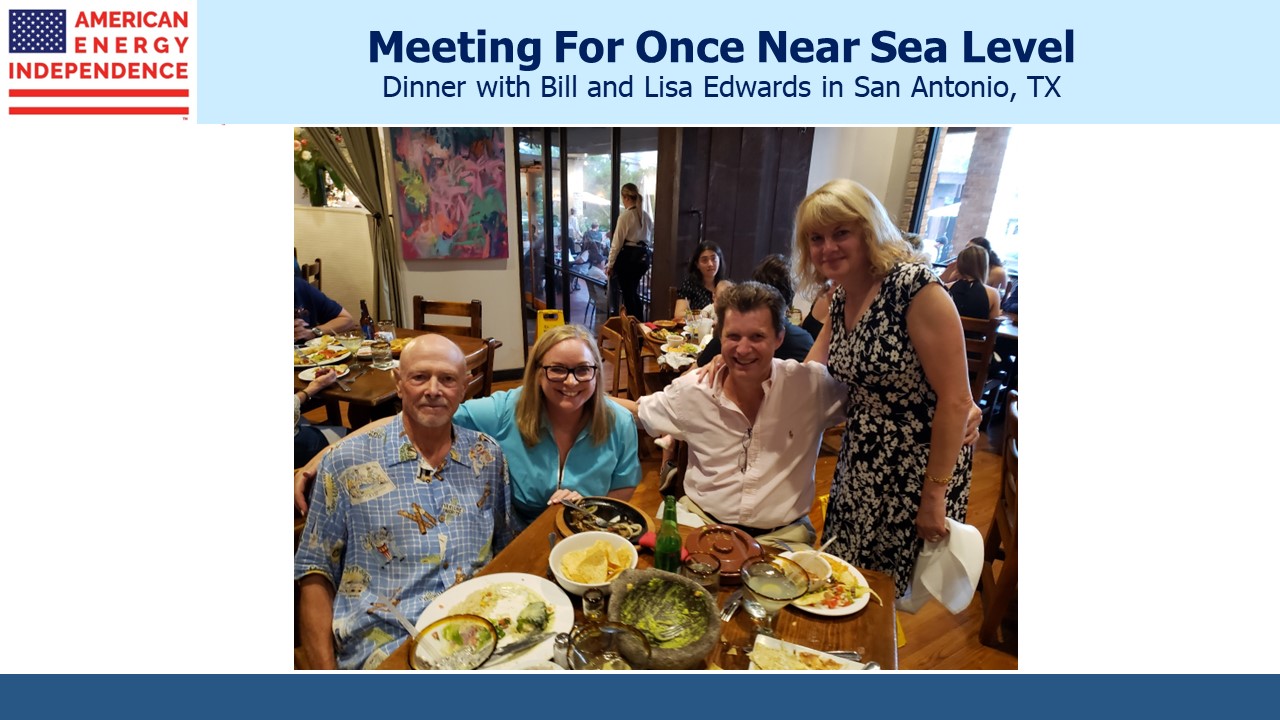