Most sell-side analysts are constrained in providing critical analysis of the companies they cover, because their firms are usually trying to do investment banking business with them. In spite of all the regulations intended to create a separation between research and banking, typically less than 10% of analyst ratings are a sell (see Why Wall Street analysts almost never put ‘sell’ ratings on stocks they cover).

Blackstone (BX) and Tallgrass (TGE) recent showed how a publicly traded partnership can promote management’s interests at the expense of other investors (see Blackstone and Tallgrass Further Discredit the MLP Model). Few were openly critical, because it conflicts with their business model. R. W. Baird’s Ethan Bellamy is one of the few whose integrity isn’t for sale. Morningstar’s Stephen Ellis spoke plainly because his company doesn’t offer banking services. Others obliquely referred to the controversial sideletter. To recap, BX acquired 44% of TGE earlier this year. If BX agreed to buy the rest of TGE within a year, a sideletter guaranteed TGE management a fixed price for their LP units, thus breaking the alignment of interests between owners and management. As TGE sank during the summer, the odds of BX seeking the rest rose. A weak stock price for TGE made the sideletter more valuable. It looked like a put option. 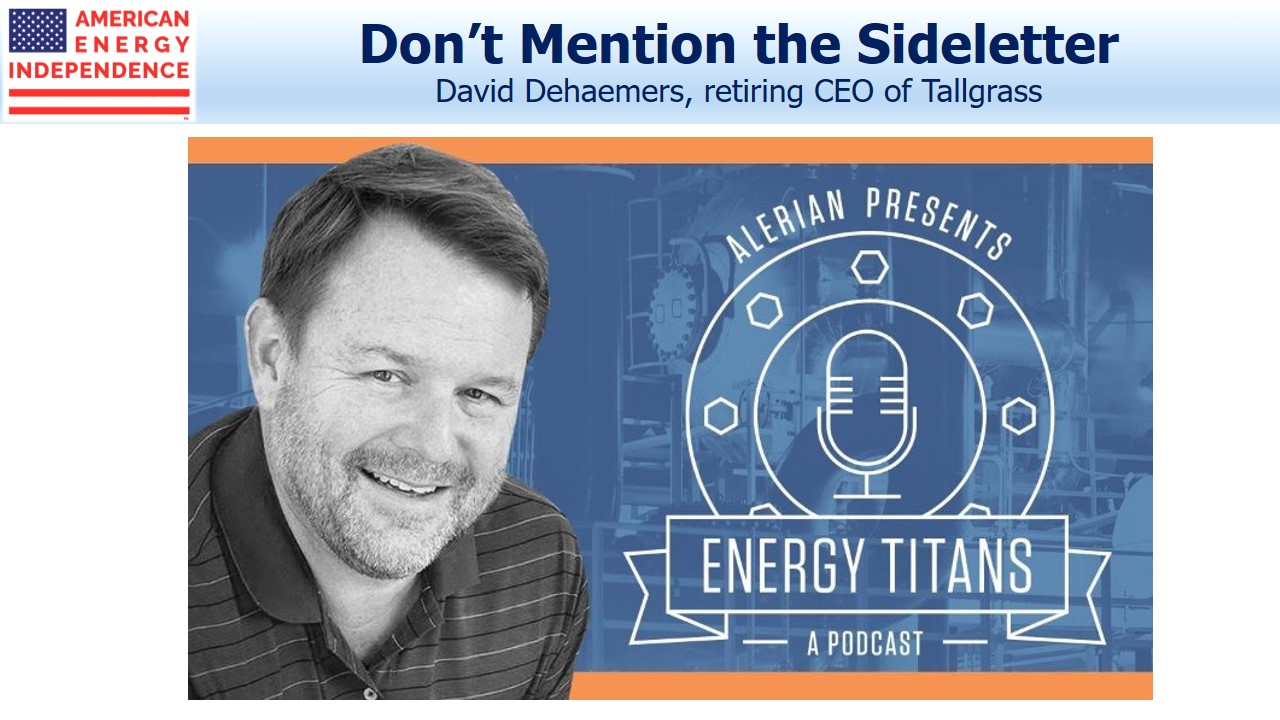 On Monday, David Dehaemers announced his imminent retirement from Tallgrass, where he did much right as founder and CEO. The eastbound Rockies Express natural gas had seemingly little future with new Marcellus natural gas competing for midwest customers. He oversaw a partial flow reversal, cleverly adapting to new patters of supply. The sideletter and his tone-deaf defense of it were a disappointing departure from his normal straight talk. It caused us to ask of other pipeline companies organized as partnerships how we might get comfortable that they wouldn’t also “do a Tallgrass”. It caused us to ask ourselves, and to question publicly, why we as asset managers should invest in companies whose ethical standards fall so far below those imposed on us by regulation and good practice.

There are some well-run companies in this sector. The three big Canadians (Enbridge (ENB), Pembina (PBA) and TC Energy (TRP)) are shining examples of investor-oriented, prudent management. Most U.S. pipeline companies would be better investments if they were run like Canada’s (see Canadian Pipelines Lead The Way). Enterprise Products Partners (EPD) and Magellan Midstream (MMP) are among the better run American companies. Crestwood (CEQP) in recent years has been well led by Bob Phillips.

It’s likely the investor outcry over the TGE sideletter hastened Dehaemers’ retirement, although he had indicated he was likely to leave by the end of this year. On TGE’s most recent earnings call, he blamed selling institutions for weakening TGE such that BX was induced to offer to buy the rest of TGE at below their original purchase price. It was as if he blamed the selling for embarrassing him by drawing attention to the sideletter, although this document was working as designed in protecting him from TGE’s downside.

It’s unclear what this tells us about the likelihood of TGE accepting BX’s proposal. TGE trades 7% below BX’s $19.50 offer, which was made three months ago. We helped highlight the unfair sideletter’s bias towards management. If ultimately BX buys the rest of TGE at a fair price without the special provisions for management, that will be a win for plain speaking. Not that long ago, David Dehaemers would have agreed.

We have only a minor investment in TGE