A couple of months ago we noted in Blinded By The Bonds the paltry yields available on long term debt. Since the 2008 financial crisis, the main driver of returns has been capital appreciation, since current income has been so low. Sure enough, over the last couple of months ten year treasuries have dipped another 0.3%, to around 2.1%. German ten year bunds now “yield” -0.20%. For an institution, the alternative is to hold currency in a vault. The cost of physical safekeeping of cash explains why investors are paying the German government to look after their assets.

The fall in long term yields reflects growing expectations that the Fed will cut short term rates. JPMorgan is forecasting two reductions in the Fed Funds rate by year-end. Yield curve historians fret that the inverted curve warns of a pending recession. It depends on the Fed. The bond market is telling them they have the wrong short term rate. The Federal Open Market Committee’s (FOMC) transparent process has removed all mystique.  Who remembers William Greider’s 1989 Secrets of the Temple: How the Federal Reserve Runs the Country? Or Bob Woodward’s 2000 volume Maestro: Greenspan’s Fed And The American Boom. The transition from deity to technocrat in FOMC leadership is complete.

We now see a bunch of government economists with no more information than the better private sector economists trying to figure it out. The mental dexterity to switch from raising rates (the FOMC’s posture through 4Q18) to cutting may take a year. The odds of a recession depend on the FOMC’s humble acceptance that they have little unique insight. Crowdsourcing monetary policy, relying on the signal from bond yields is the logical evolution. The FOMC faces a Behavioral Finance problem – over confidence, combined with anchoring to their previously held beliefs. The economy’s growth path will turn on how well they adapt their behavior.

Trade friction is a growing cause of concern. On this, we’d simply note that when President Trump moves into re-election mode, China’s then-current proposal will be seized and another victory for America claimed. Trump can’t control the market, but a president who Tweets the Dow’s milestones (even when they’re a return to old highs) is unlikely to let policy get in the way of boosting stocks (see The Trump Put). Tariffs are only an issue for 2019. The way bonds are moving, Trump may claim further credit for persuading the Fed to lower rates.

Falling bond yields and stock market weakness once again highlight the Equity Risk Premium (ERP), which is the difference between the earnings yield on the S&P500 and ten year treasuries. This starkly reveals the superior choice stocks offer versus bonds. At just over 4.0, the ERP is at a level reached only three times since 1962 (in 1979, 2011 and 2012). In each case, subsequent equity returns were quite satisfactory. Moreover, Factset is forecasting 11% S&P500 earnings growth, so the 2020 ERP looks even more compelling. 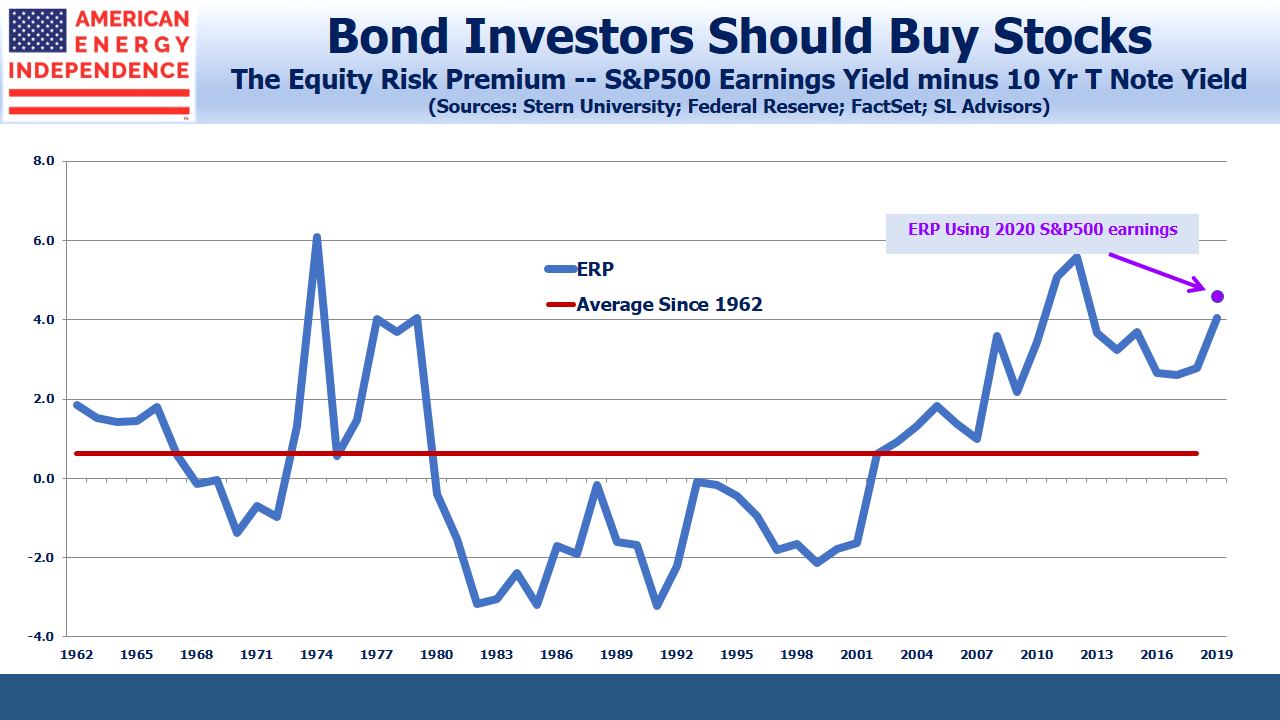 There will always be surprises. The biggest potential problem we see is Iran, where U.S. policy seems to have an undefined objective while steadily denying Iran access to sell its oil. It resembles U.S. policy towards Japan prior to World War II, when we denied them access to oil imports. As tensions rise in the Gulf, a military miscalculation is possible. Iran’s options are unclear. Although there are many more compelling reasons to be invested in midstream energy infrastructure, holding U.S. energy assets during a Middle East war would be a better bet than many.