Maslow’s Hierarchy of Needs is a stylized pyramid with food and shelter at the base and self-actualization at the top. Maslow wasn’t around to contemplate where ESG (Environmental, Social and Governance) aspirations sit on his pyramid, but he would likely have placed them near the summit. The people and institutions most sensitive to ESG have already satisfied the other needs on the pyramid.

This is how the EU has come to rely on Russia for 40% of its natural gas while ambitiously pursuing the energy transition and, in Germany’s case, phasing out nuclear power. They perceived the world as post-geopolitical, making climate change a high priority since they identified few other big problems. The green movement’s hostility to reliable energy has stifled investment in new supply without much impacting demand. The consequent high prices have helped fund Russia’s invasion of Ukraine, and the EU’s impotence is most visible in the exclusion of energy from the west’s list of sanctions. 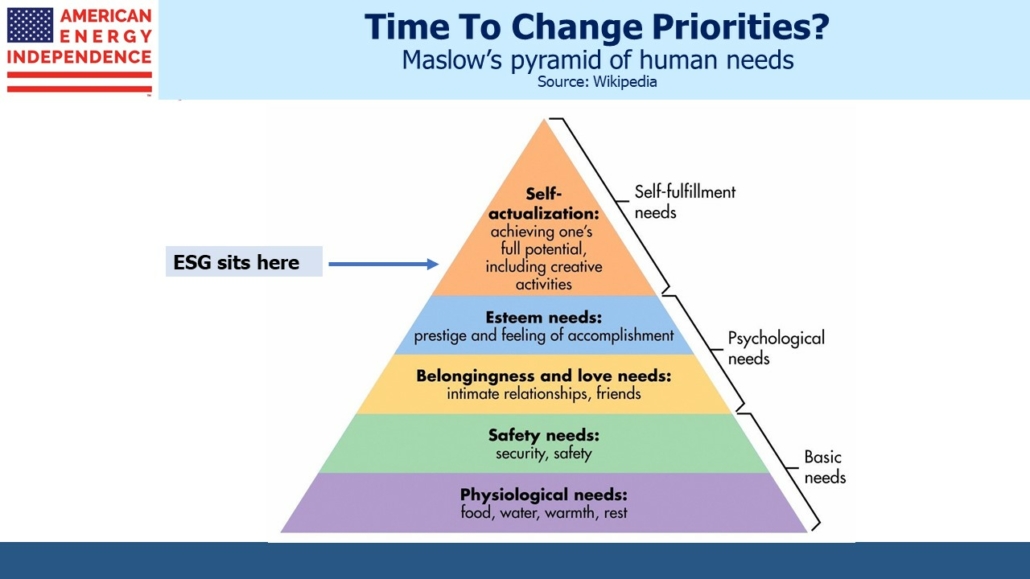 The reason emerging countries continue to increase emissions is because their populations are lower on Maslow’s pyramid than rich world populations. If like John Kerry you’ve spent the last few decades flying on private jets, you’re afforded the luxury of preaching on climate change because you’ve ascended past all the other needs. The EU and Russia are at different levels on the pyramid, as the tanks rolling through Ukraine have shown. Russians don’t do virtue-signaling.

Geopolitical risk tends to be a right-tailed event for energy investors – a low probability positive outcome. Few sectors have that risk profile – left-tailed events (9-11 attack, 2008 Financial Crisis, Covid) cause all the trouble, and higher energy prices may yet be another financial shock. But it’s positive for the US energy sector. 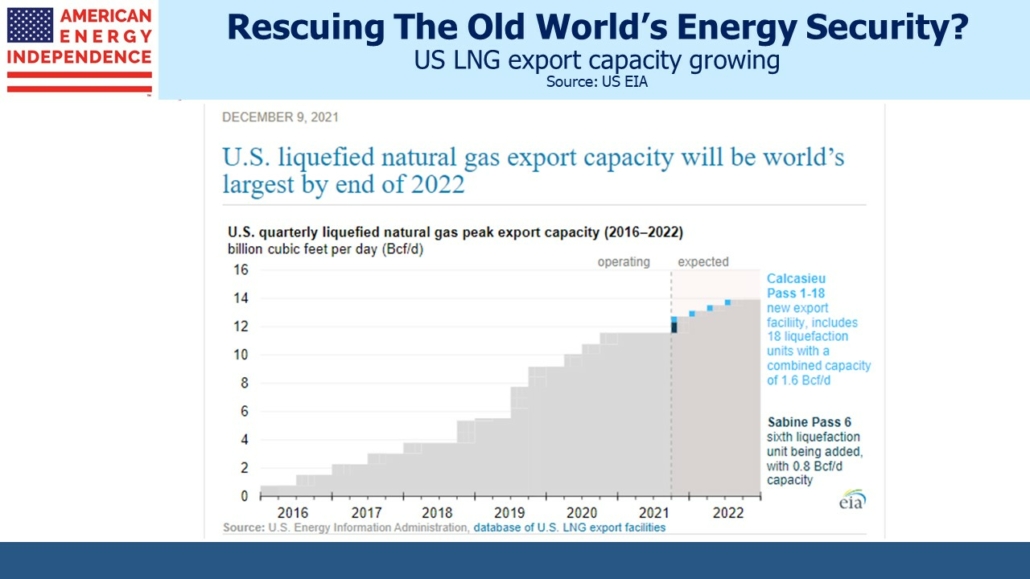 US shipments of Liquified Natural Gas (LNG) have been heading mostly for Europe in recent weeks as Russian pipeline deliveries were mysteriously lower than expected. Two months ago, this inconveniently coincided with less blustery weather that slashed output from windmills. Many of the buyers of US LNG are trading companies able to direct cargoes to the highest price. China is the world’s biggest buyer of LNG, with Asia representing 75% of global LNG trade. Europeans have had to compete on price to acquire needed supplies, at times driving European LNG prices to 10X the US. Cheniere, the leading LNG exporter in the US, raised 2022 EBITDA guidance by 20% and Distributable Cash Flow guidance by 35% when they reported 4Q earnings last week.

Williams Companies, which operates the Transco natural gas pipeline network, sees an additional 12 Billion Cubic Feet per Day (BCF/D) of LNG demand through 2030. That would almost double our existing exports – that they won’t grow even faster reflects the length of time LNG facilities take to build. 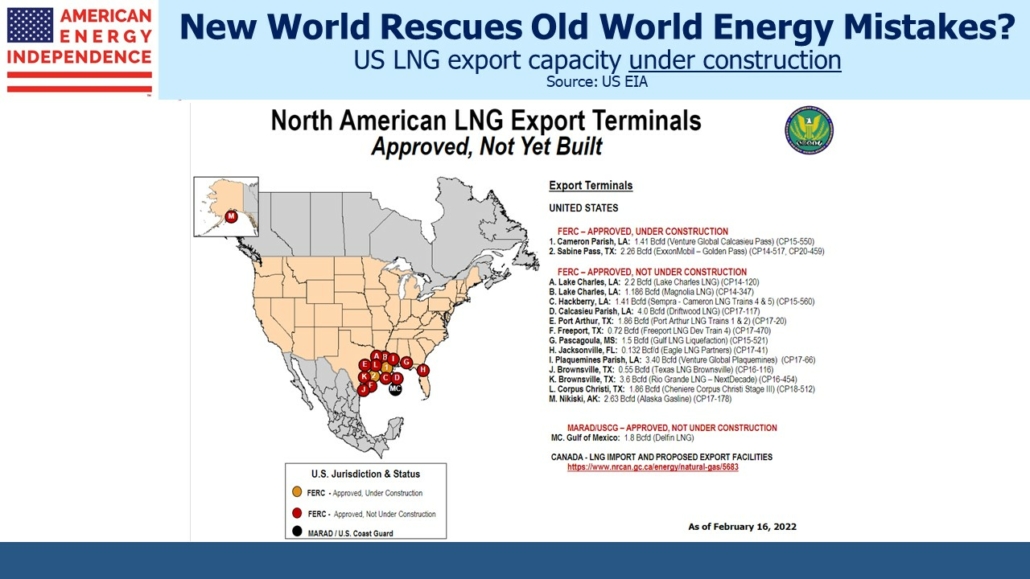 The Russian invasion of Ukraine is a near term positive. Europe’s response may make it a permanent one, if EU countries reassess their energy security. The US, including our pipeline companies, are well positioned to benefit from this. For example, in late 2020 French power company Engie halted LNG negotiations with NextDecade because of concerns over emissions. Today they might react differently. 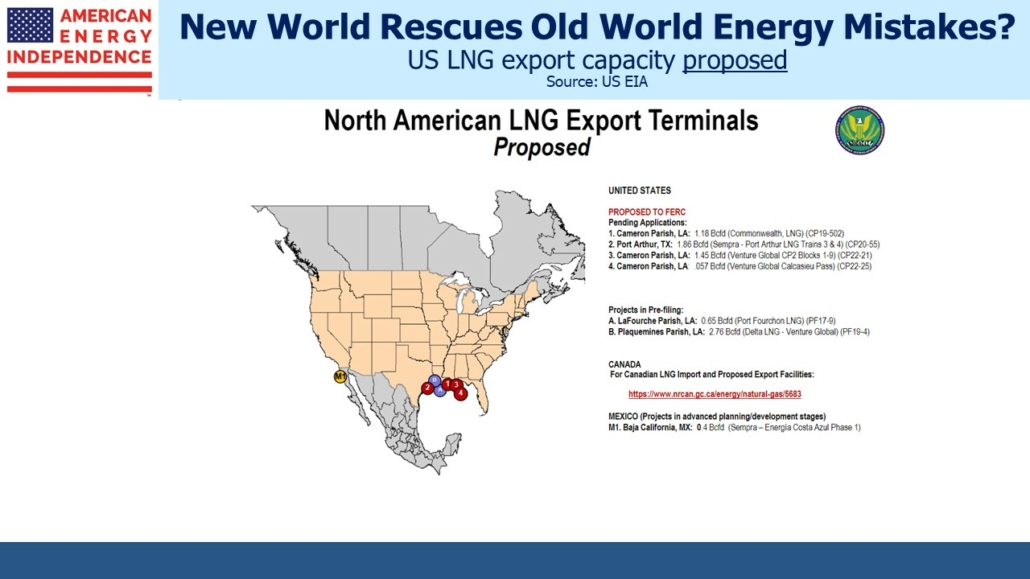 Higher oil and gas prices will also feed through to inflation. Last year Wells Fargo estimated that around 60% of the pipeline sector’s EBITDA was linked to inflation escalators via tariffs that reprice based on PPI. Six months ago with PPI running at 5.5% they estimated a 3% boost to sector EBITDA for 2022. PPI is currently running at over 13%.

Persistently high inflation doesn’t necessarily mean the Fed will have to boost rates higher – this is a dovish FOMC and there are numerous avenues for them to identify temporary price surges soon to abate, as they did last year. But it does mean that inflation persistently above the Fed’s long term 2% target is even more assured (see Why You Shouldn’t Expect A Return To 2% Inflation). The market has begun looking ahead to another mistake, an overshoot of monetary tightening (see Policy Errors On Interest Rates And Energy). Investors should be concerned that reducing inflation below 3%+ is ultimately deemed too economically disruptive.

The PPI-linked tariffs on pipeline stocks have been a fixture for many years, and in the seductively unexciting days before the Shale Revolution were regarded as positive by income seeking investors. Over-leverage and MLP distribution cuts diverted attention from the PPI linkage, but it never went away and will attract increased attention later this year as earnings reports reflect price increases.

Midstream energy infrastructure is well situated to benefit from Europe’s mistakes on energy policy and elevated inflation. Maslow would not be surprised.