Pricing In A Less Dovish Fed

Bond yields have drifted up 0.25% over the past month. Real yields on TIPs have barely budged from around –1%, so the move in bonds has translated into rising inflation expectations — now solidly above 2.5% for the next decade.

The persistence of negative real yields is surprising – with the Fed likely to finally rein in their bond buying, one might have expected this loss of support to be reflected in TIPs, but so far it hasn’t. Inflation-adjusted returns have been falling for many years. Negative TIPs yields undercut the concern of fiscal hawks about our ballooning debt, since there’s apparently no negative consequence. 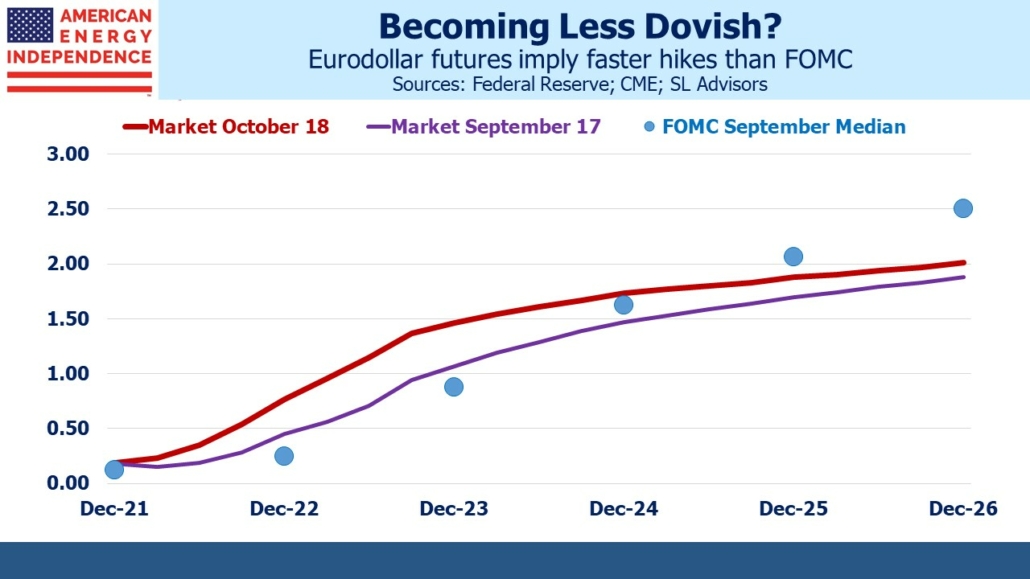 The increase in ten year treasury yields has not been evenly distributed across the eurodollar futures curve. Over the past month, the market has factored in a more hawkish FOMC  – one additional tightening of monetary policy by the end of next year (total of two) has been priced in. By the summer of 2023 almost two additional tightenings  have been priced in (a 1% increase in total). The rise in inflation expectations is creating the anticipation of a reaction from the FOMC.

$120BN a month of quantitative easing has continued for too long. The $40BN a month of mortgage-backed security purchases is especially egregious, and the slothful exit from this strategy is turning out to be too slow. Following last month’s payroll report some even questioned whether tapering might be delayed, although the shortfall in employment was due at least in part to a shortage of workers. The FOMC remains focused on restoring the five million jobs still missing from pre-covid, and is willing to risk some inflation in the process. 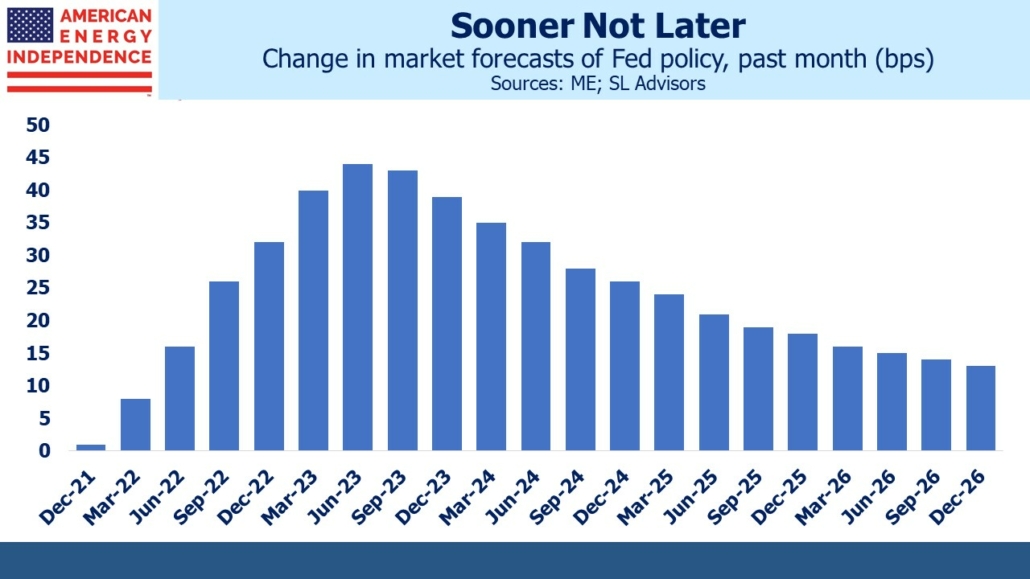 The move in rates has pulled the market further away from the FOMC’s outlook. This Fed is the most dovish in living memory. It’s easy to see how chair Jay Powell could justify temperance before raising short term rates. In addition to the employment picture, widely acknowledged logistics problems won’t be fixed with higher rates.

Although Democrat politicians won’t accept credit, they’ve engineered rising oil and gas prices through curtailed investment so as to shift consumption to renewables – even if solar and wind aren’t yet up to the challenge (see Why The Energy Crisis Will Force More Realism). Reducing CO2 emissions requires more expensive energy (see Is The Energy Transition Inflationary?). Tightening monetary policy because of a green agenda seems unlikely.

Few policymakers want higher rates, but the “transitory” narrative is looking less compelling. The next public comments from FOMC officials will be worth watching to see if they confirm the more hawkish rate path currently in the market or remain true to their previous guidance. Powell has said they wouldn’t contemplate raising rates until they’d stopped buying bonds. This suggests 2H22 as the earliest they would raise rates, although they could also speed up tapering if necessary.

The net result is that the market is increasingly challenging the Fed’s benign inflation outlook and slow policy normalization. The FOMC’s dovish instincts are being challenged.

On a different topic, liberal commentators have been lambasting Senator Joe Manchin (D-WVa) as the one person thwarting efforts to combat climate change (see As Manchin Blocks Climate Plan, His State Can’t Hold Back Floods). This overlooks the 50 Republican senators also opposed to the Administration’s agenda, so Manchin’s concerns place him in the majority, even if that is inconvenient to progressives. It is democracy in action.

Manchin believes that the voters of West Virginia have more to lose from a system of rewards and penalties for utilities dependent on their adoption of renewables than they do from climate change. This seems rational – the drop in coal demand they fear would hit quickly. The adverse effects of global warming are loosely related – China’s choices on emissions are the most important and are unlikely to be swayed by West Virginia.

Once again we’re seeing the failure of climate extremists to move beyond broad yet shallow support, due to pretending the energy transition is costless. Voters in West Virginia don’t see it that way, which is why a more honest discussion about costs and benefits will be necessary before we make any real progress on the issue. Hopefully that is coming.