The Equity Risk Premium reveals that stocks are cheap relative to bonds (see Stocks Offer Bond Investors an Opening).  A corollary of this insight that bonds are expensive is that you can replicate the return on $100 in ten year treasury notes with a combination of stocks and cash. It relies on a few assumptions, such as an unchanged dividend yield, known dividend growth rate and unchanged tax policy. Because it shows that as little as 13% in equities, with the rest in cash (i.e. a 13/87 barbell) can match the ten year note, it starkly highlights the expense of bonds. 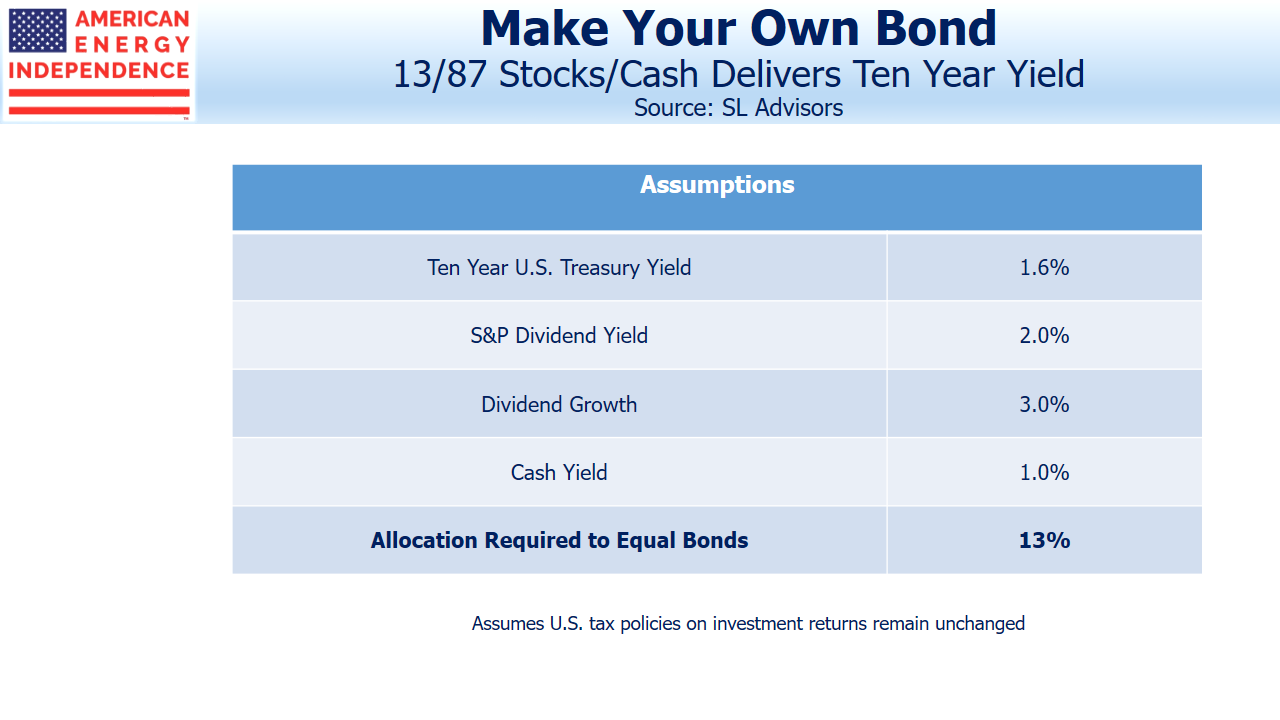 Pension funds are large investors, including in fixed income. The OECD estimates that they hold over $8TN in bonds, equal to approximately 10% of the global investment grade bond market. About half is U.S. pension funds. 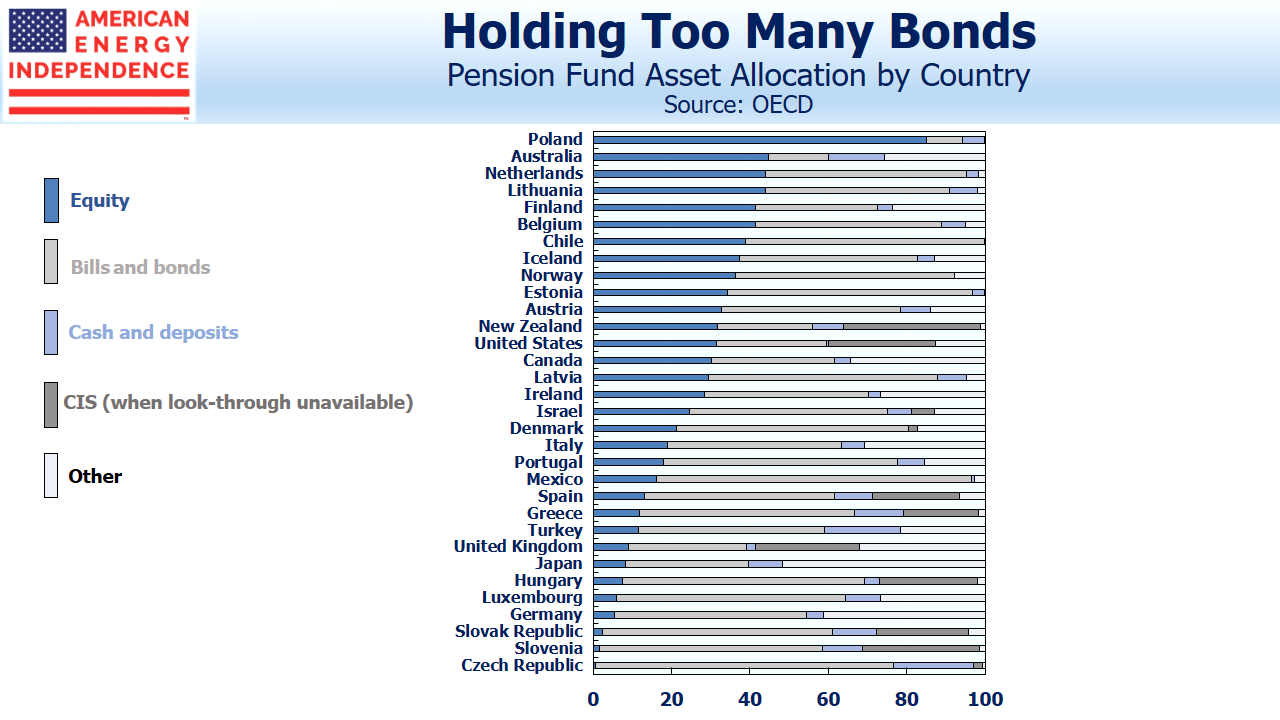 An interesting blog post by Colin Lloyd (see The Pension Fund Apocalypse)  estimates that the real return on this $8TN in debt is negative. 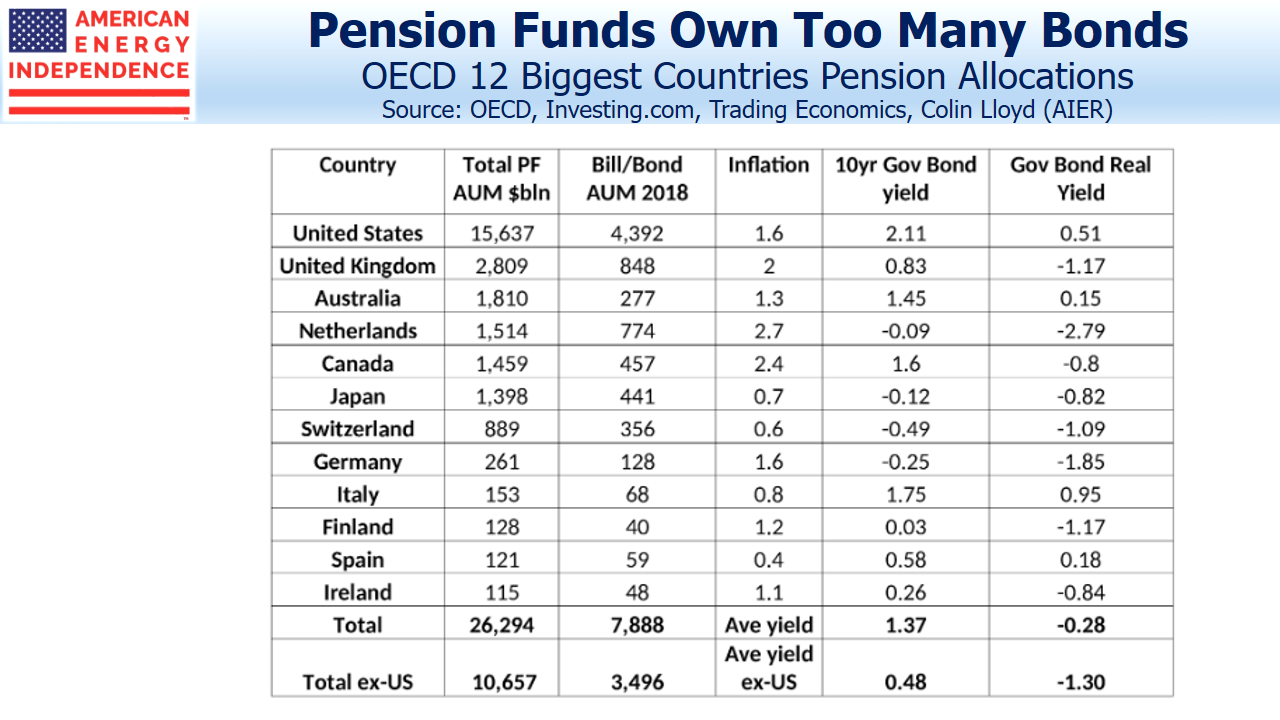 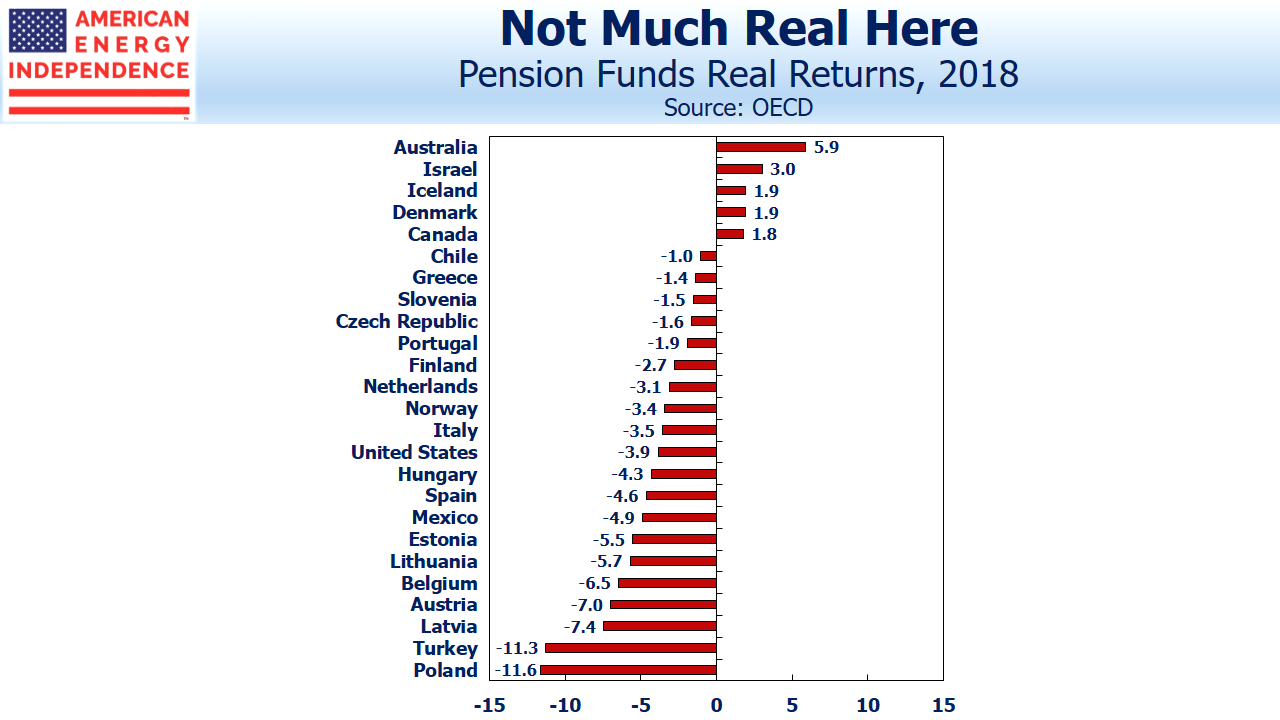 This unsurprising result has worsened with this year’s further drop in bond yields. Although the math of divesting from long term debt is compelling, pension funds face complex restrictions on their asset allocation. For example, U.S. pension funds maintain a 28.1% allocation fixed income, in the certain knowledge of a negative real return. They inexplicably raised their allocation, from 24.9% the prior year.

What should have happened by now is that discerning pension funds shift away from bonds, but so far there’s little evidence of this.

The demand for fixed income from investors such as pension funds is fairly inelastic. Colin Lloyd calculates that the nominal return on bonds over the past century is 4.3%. The regulatory framework assumes that negative real returns can’t persist indefinitely, and that mean reversion will bring higher yields. But the inability or unwillingness of pension funds to lower their exposure makes such a correction less likely.

More flexible investors, such as endowments and foundations, can be more discriminating. But the persistence of low/negative yields, with almost $17TN of sovereign debt now yielding less than zero, shows that demand remains strong.

Bond yields may rise from their recent new lows. But a return to the long run average real return of 2% would require ten year notes to yield 3.5-4%, double their current level. Continued negative real returns and unchanged fixed income allocations will make it harder for pension funds to be fully funded.

It doesn’t have to lead to a crisis, but it’s one reason to expect long term rates will remain low for the foreseeable future. Perversely, for funds that seek to match the cashflows of assets and liabilities, lower interest income can lead to greater bond investments to achieve a required level of cashflow. What’s needed is a relaxation of regulations to allow a more objective rejection of bonds when returns are inadequate.

Pension funds are one reason rates have stayed low.