Of Red Crypto And Black Pipelines

Bitcoin could be poised for another ascent. Bulls will be encouraged that Jim Cramer advised holders to sell following the collapse of FTX. Few readers would have been surprised when this blog first expressed crypto-skepticism in December 2017. Its return since then is 1.7% pa, substantially behind the market and, naturally, midstream energy infrastructure.

But annualized returns are too pedestrian to be the metric of choice for crypto-traders. They prefer “X”, as in “I made 3X on crypto so far this year.” For them, red is the new black. 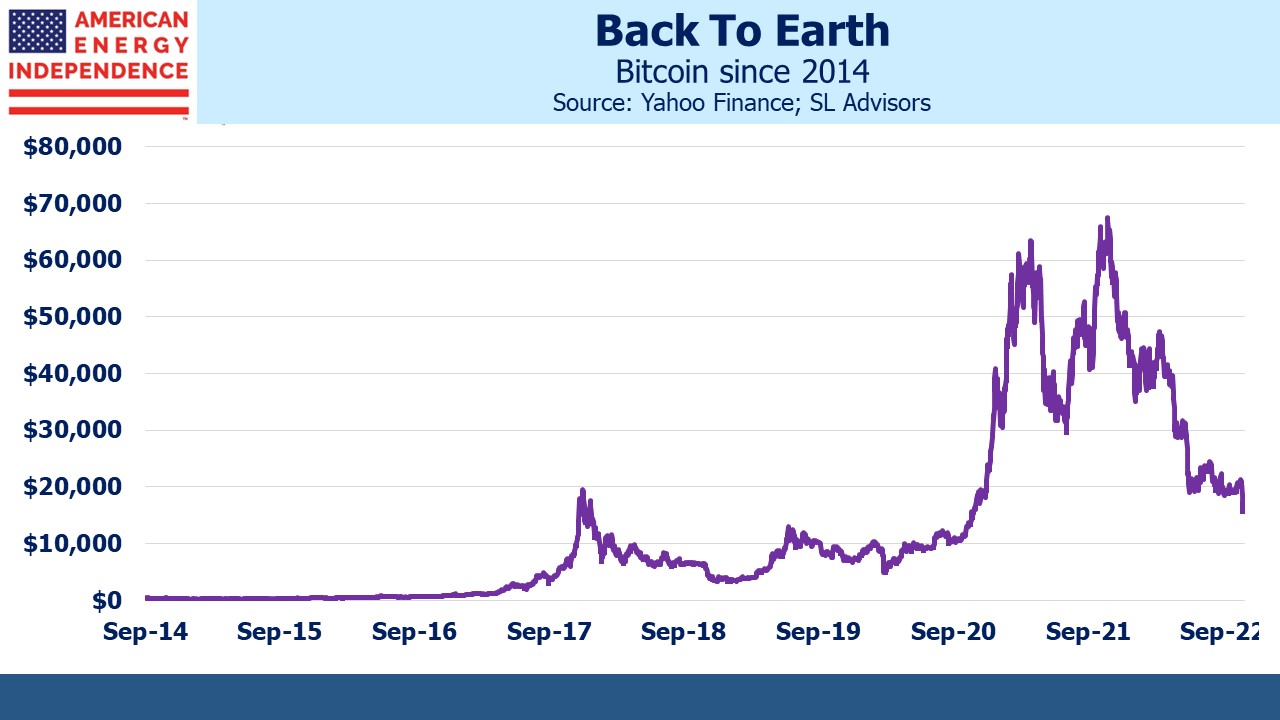 Bitcoin is too volatile to be a store of value. Exchanges are routinely hacked. And the government can seize it. So what’s the point of it? You don’t have to short bitcoin to be unconvinced – avoiding it is sufficient. It has always looked like a modern Dutch tulip bulb craze. Not everything that changes in value is an investment or needs to be traded. Many investors in FTX were proponents of decentralized finance (“defi”), valuing the freedom to operate outside existing regulatory structures. Now as many as a million creditors are relying on regulators and national justice systems to salvage value for them. 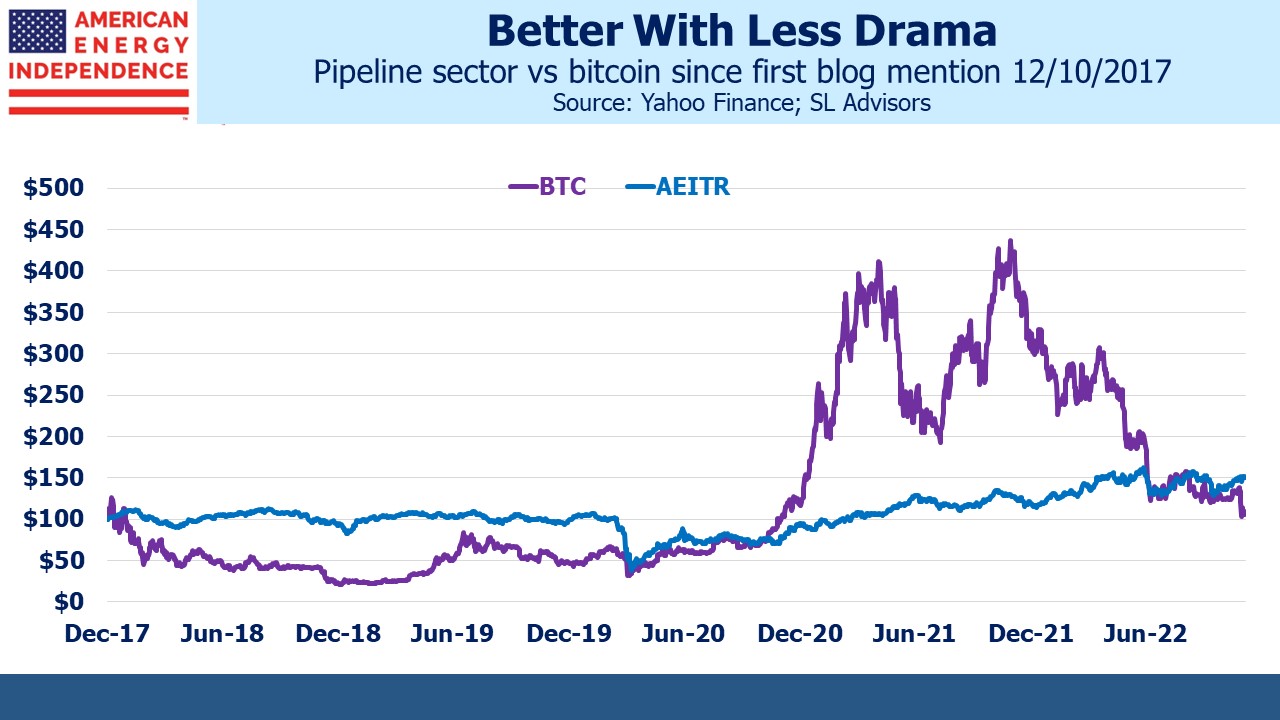 The long term bull case for bitcoin sees it assuming the role of a widely-held currency, with a yield curve reflecting interest rate expectations set in the absence of a central bank. For now the US$ is not threatened with a loss of dominance. Fed funds futures project a cycle peak of just under 5%, sooner and higher than a few weeks ago. Like the FOMC, the market expects rates to begin decreasing a few months later. Fed chair Jay Powell did suggest rates could peak at a higher level than previously expected, but that was before the benign CPI number. 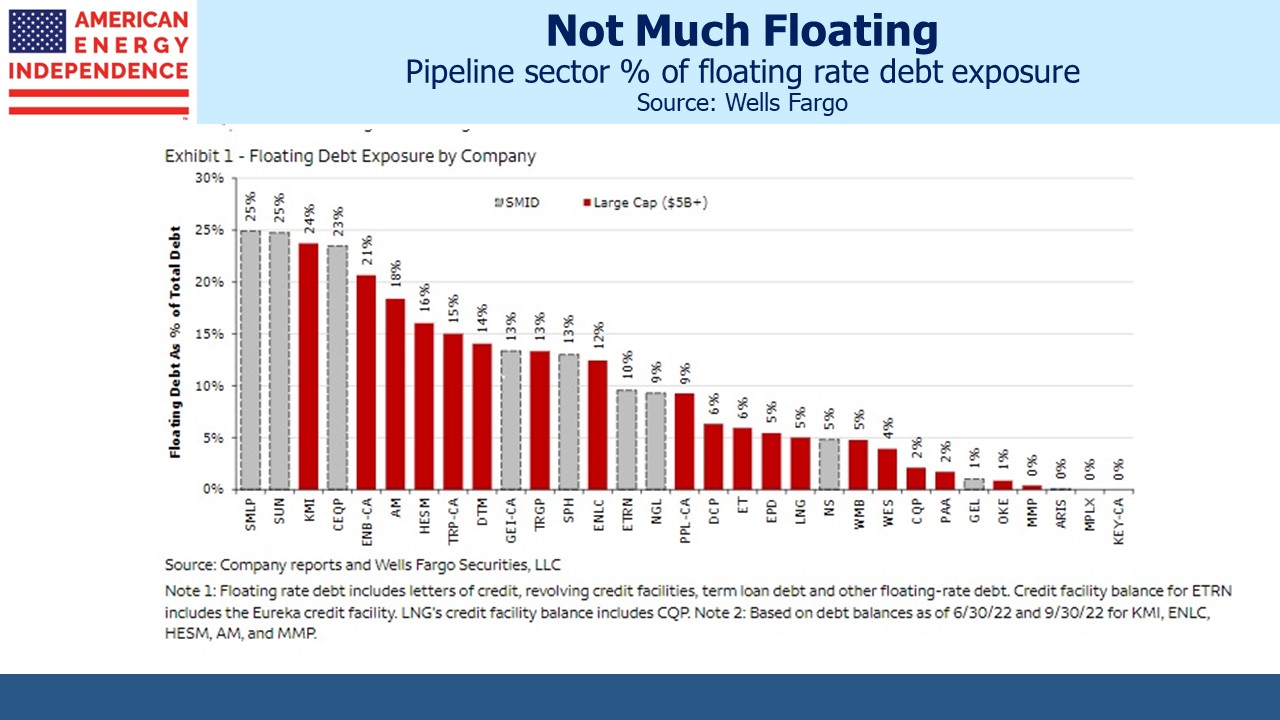 Investors sometimes ask us about the exposure of pipeline companies to rising interest rates. The chart from Wells Fargo is informative and shows the preponderance of fixed rate debt across the sector. Wells Fargo estimates that a 1% increase in short term rates would reduce free cash flow by a similar percentage. With around half the industry’s EBITDA subject to inflation-linked tariffs, elevated PPI and interest rates is preferable short of causing a recession.

The COP27 is notable for more realism (see Energy Pragmatism Is Beating Extremism) and the presence of traditional energy companies. EQT is the biggest producer of natural gas in the US. Their CEO Toby Rice has been vocal in making the case for natural gas as a substitute for coal. “The most important thing is for people to see America’s largest natural gas producer here at COP27 as a symbol that we’re going to be a leader in energy transition,” said Rice on the sidelines of the conference. 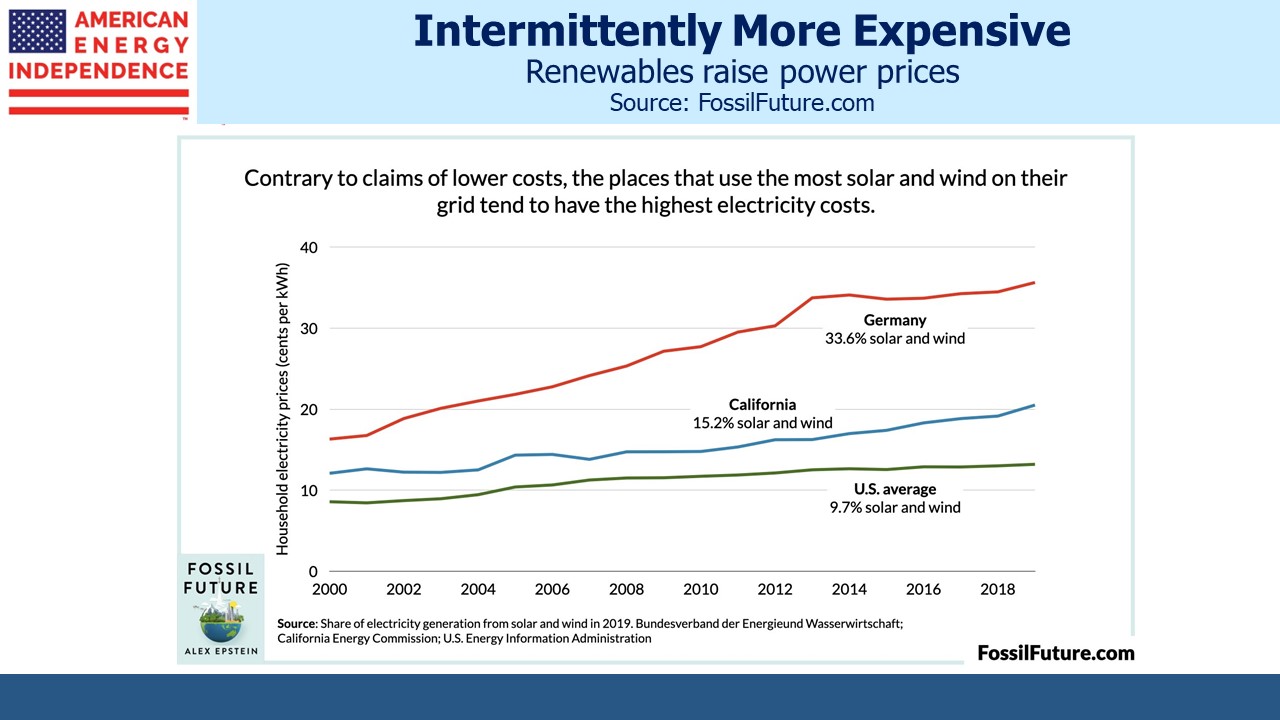 Coal power plants produced a fifth of global greenhouse gas emissions in 2021, more than any other single source, according to the International Energy Agency. China consumes half the world’s coal. Their representatives at COP27 offered the novel argument that Russia’s invasion of Ukraine justifies this. China is building coal burning power plants roughly equal to what the US has operating, but this is apparently to improve energy security and does not represent a shift in emissions policies. Do residents of California or Germany, where expensive electricity comes with high renewables penetration, grasp this? Should we believe it? 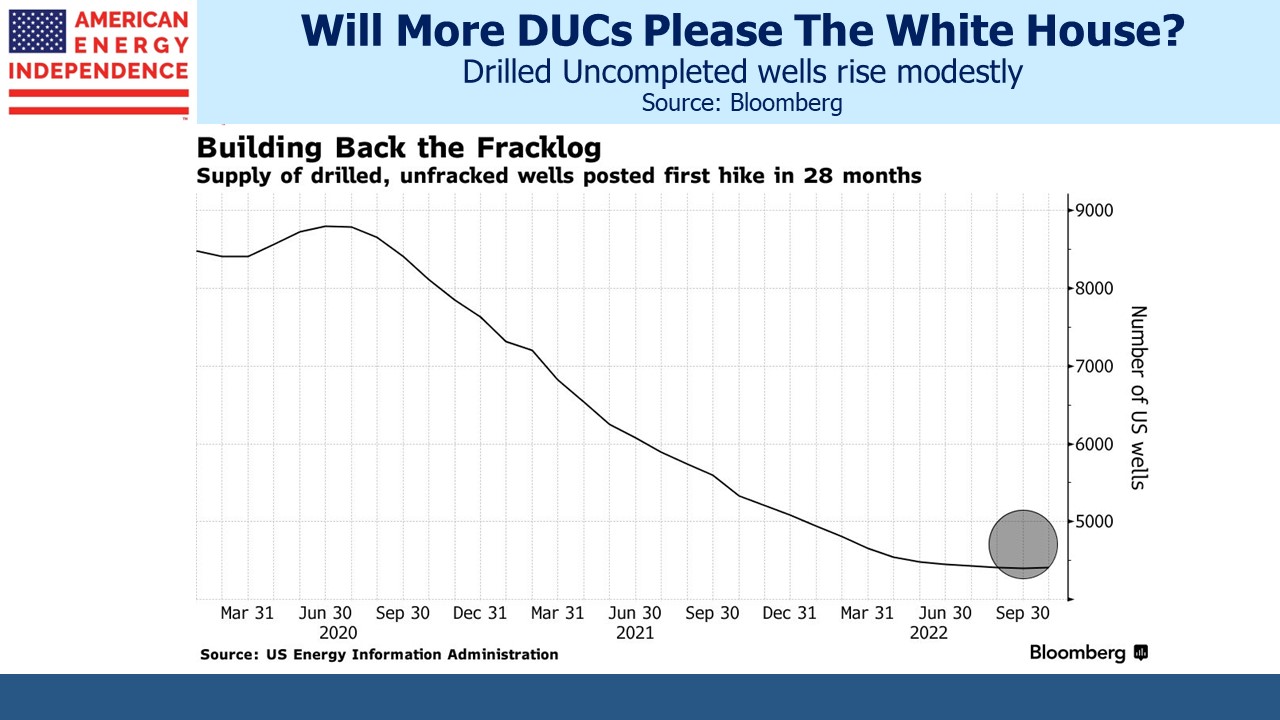 The White House has been frustrated that US E&P companies haven’t responded to higher prices by increasing drilling. Few are surprised given the hostile posture the Administration has towards the energy industry. It’s imperceptible on the chart but Drilled Uncompleted wells (“DUCs”) increased for the first time in over two years. The steady decline in DUCs has long frustrated Joe Biden, who has excoriated companies for not producing more oil in between promising no more fracking. 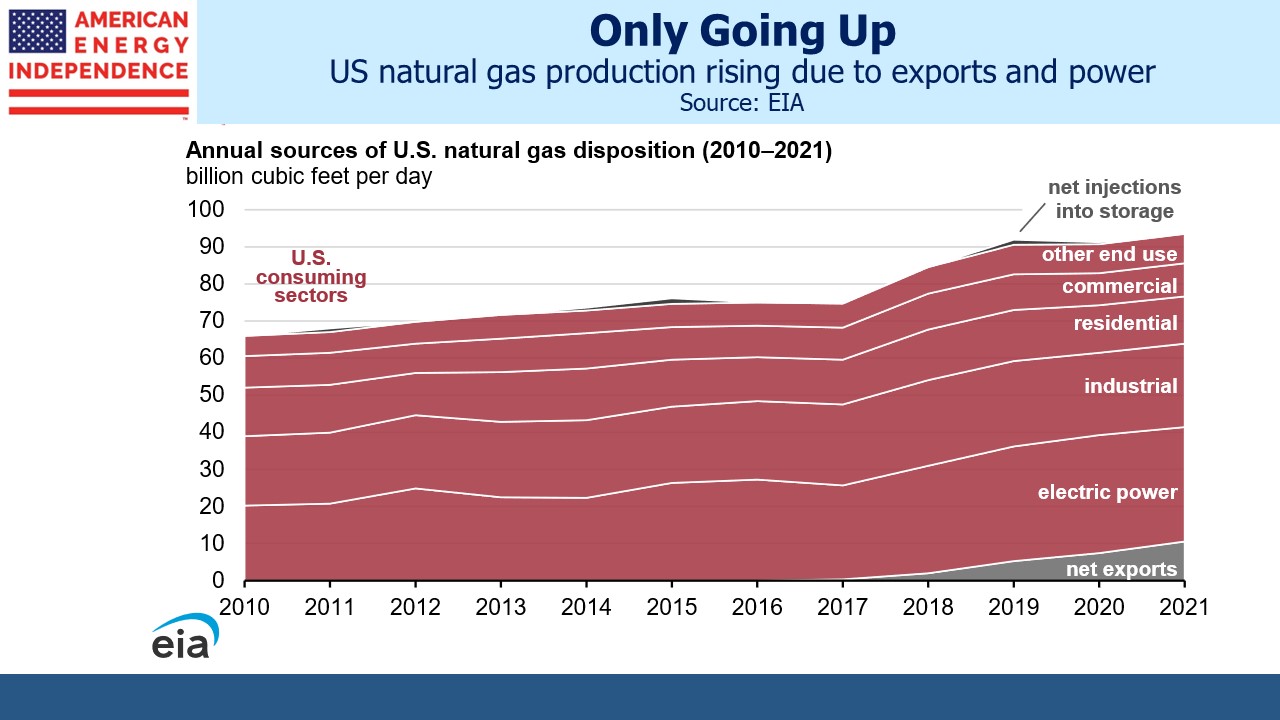 Meanwhile, natural gas production continues to move higher. The US Energy Information Administration noted that natural gas is providing 38% of US electricity, up from 37% last year. In recent months the power sector has taken record amounts, consuming about a third of total US output. The EIA projects a slight drop next year, although that was once their 2022 forecast as well.  Along with renewables, growth is at the expense of coal.

The industrial sector and exports of Liquefied Natural Gas (LNG) have both been growing in recent years. There’s little doubt that LNG will continue to rise, providing energy security and a cleaner alternative to coal for its buyers. Crypto investors probably regard pipelines as boring, but tangible assets have their place too.