Not Just Another Billionaire With A Plan

Bill Gates readily concedes that the world isn’t short of “rich men with big ideas” in How To Avoid A Climate Disaster. He brings an intellectual honesty to the climate change debate that is absent from Democrat policy prescriptions, and often ignored by Republicans. Gates has done his homework, producing a book spilling over with facts and insights. The climate impact of each human activity (use of power, making things, moving around) is presented, along with its contribution to the 51 billion tons of Greenhouse Gases (GHGs) emitted annually. He presents the issues in an easily understood framework that many readers should find engaging and accessible. 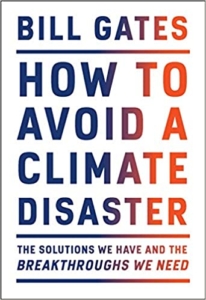 Although Bill Gates is surely a Democrat, it’s unlikely progressives will welcome his contribution. He dismisses Democrat orthodoxy by showing that the energy transition will be very expensive. He feels we should be motivated by the moral obligation to counter planetary warming because it will harm poorer countries the most. Rich countries can afford to manage rising sea levels (see Netherlands).

Since the Gates Foundation is focused on disease and malnutrition in the developing world, his altruistic view isn’t surprising. And the moral argument is a respectable one. But it exposes the enormous political challenge in gaining popular support for higher domestic energy prices to stop, say, Bangladesh flooding. Last week Joe Biden rejected a French proposal to redirect 5% of our Covid vaccines to poorer countries until all Americans have been vaccinated. It was a minor acknowledgment of political reality. Few have the means or inclination to dedicate themselves to solving poor countries’ problems before their own.

How To Avert A Climate Disaster reaches positive conclusions because it argues that current technology and innovation make solutions within reach. It provides policy prescriptions but deliberately avoids the politics. In many cases Gates calculates a “green premium”, reflecting the cost of converting transport, power generation, cement or steel production to be emission-free. Not surprisingly he favors a carbon tax to create price signals that fully reflect the externalities of burning fossil fuels.

Renewables figure far less prominently than in the Green New Deal (see The Bovine Green Dream), a document Gates would likely view as fantasy if he didn’t studiously avoid such engagement. He illustrates the fundamental problem of solar and wind intermittency by considering the battery back-up a Tokyo 100% reliant on windmills would require to maintain power during a not-uncommon three-day typhoon. Even with optimistic assumptions about improved technology, the cost would be prohibitive. Gates concedes to have, “…lost more money on start-up battery companies than I ever imagined.” He knows a bit about the subject.

Although efforts to curb emissions around the world generate enormous energy and press coverage, any actual improvements to date have come mostly from coal-to-gas switching for power generation (i.e. the U.S.) or last year’s drop in global economic activity due to Covid. U.S. energy costs haven’t risen noticeably, although California’s energy policies have managed to combine high costs with unreliability (see California Dreamin’ of Reliable Power).

Gates believes poor countries should be allowed to increase emissions, since energy consumption is inextricably linked to improved economic well-being. “We can’t expect poor people to stay poor because too many rich countries emitted too many greenhouse gases” he argues from the lonely moral high ground.

Reaching zero emissions by 2050 requires western democracies imposing substantial new regulation and costs on economic activity for decades. Meanwhile, the world’s building stock will grow mostly in poorer countries, requiring cement, steel and all the other emission-producing byproducts of human advancement. This construction will add the equivalent of another New York City every month for decades.

Gates asserts that climate change will inevitably cost – inaction will lower GDP, and action will take lots of money. It’s well he doesn’t consider how governments will sell this to voters if an honest discussion ever occurs, because by comparison the technical challenges are more easily solved.

The technology already exists to capture the carbon dioxide emitted by burning fossil fuels, whether to generate electricity (27% of global GHGs) or produce steel (manufactures also including cement and plastics in total are 31% of GHGs).

Gates estimates that emission-free power in the U.S., to include gas and coal with carbon capture, would raise prices by 15%. The green premium to make ethylene (plastic), steel and cement without CO2 emissions would raise prices by around 12%, 23% and 110% respectively. We could already start implementing such policies if the support was there. But political leaders avoid such talk, recognizing that voters’ concern about climate change doesn’t include much tolerance for higher prices.

An energy investor today has to assess plausible outcomes, ignoring the shrill rhetoric of climate extremists unburdened by the costs, facts and technological challenges Gates lays out.

Emerging economies will continue to grow, feeding all the increase in global energy demand as they seek OECD living standards. Their GHG emissions will rise. How tolerant will western democracies be of rising costs for virtually everything while we save the planet and allow poorer countries to catch up?

Bill Gates is an unfailing optimist – invariably the most pleasant posture for living. But your blogger found the comprehensive list of what needs to be done dauntingly improbable. Mitigants of the results of global warming are probably a better investment than betting on decades of extended selflessness by 1.3 billion OECD citizens, the rich world whose collective actions Gates believes will save all 7.6 billion of us.

There are already bold options available. We could phase out coal. We could require carbon capture on industrial use of fossil fuels. We could use more nuclear, whose safety record per unit of power generated is unmatched. Instead, more solar and wind is the climate extremists’ mantra in spite of intermittency and the NIMBY challenges of building transmission lines to move power from sparsely populated solar and wind farms to population centers (see Review Of Russell Gold’s Superpower for an example of how hard this is).

Burning less coal, carbon capture and compensating for renewables’ unreliability all support growth in natural gas demand. Gates argues against a shift to natural gas for power generation. He fears the 30-year life of a typical combined cycle power plant would embed its CO2 emissions for too long. It would show progress to 2030, while putting zero by 2050 out of reach. But if tangible results within the timeframe of election cycles are needed, it’s hard to see a better way.

If in a decade that’s how things have turned out, Gates the pragmatic optimist will hail it as success. We should too.