Citibank published some interesting research recently, making the case for higher natural gas prices in the months ahead. Oil production in the U.S. has fallen sharply as a result of Covid. Gasoline demand has recovered from its low point in April, but remains about 9% below normal.

Natural gas demand has shown much less impact, because it’s not used in transportation. The chart shows that it’s running the same as a year ago, although last week power consumption dipped. Power outages from Tropical Storm Isaias may have been partly to blame. 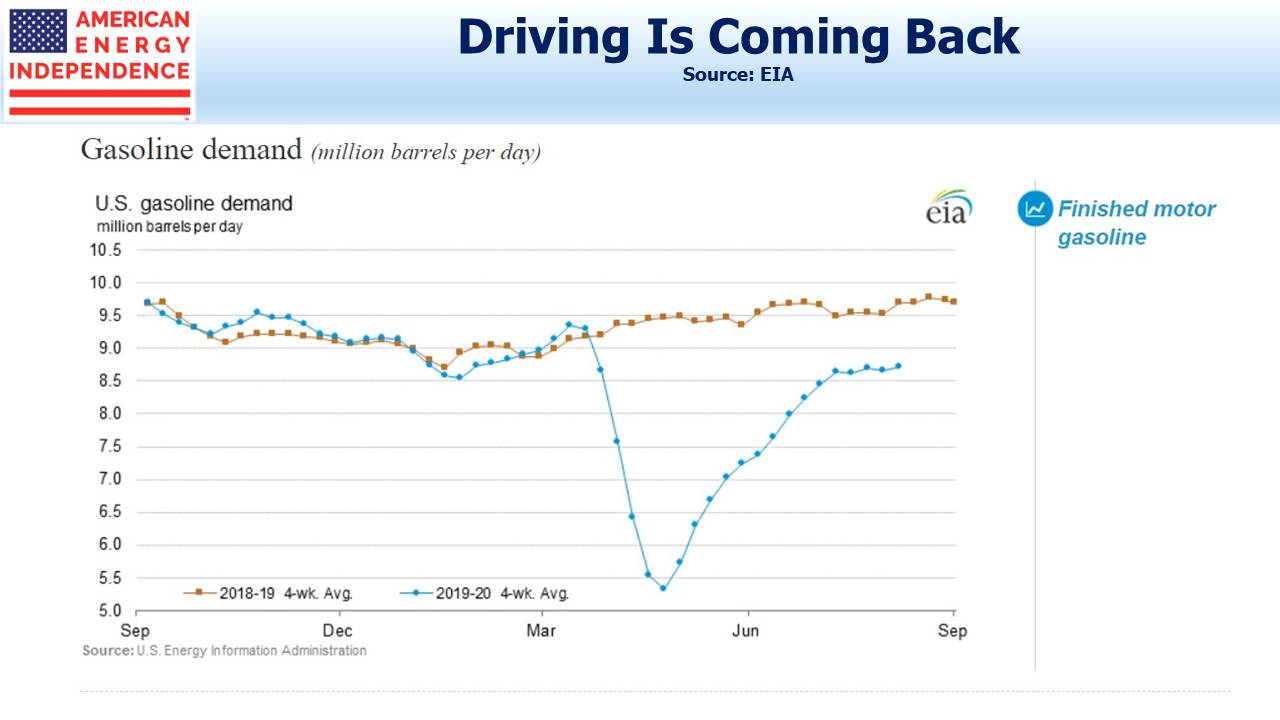 Citi’s forecast of higher natural gas relies on two factors: the drop in oil production has also reduced output of associated gas, which was most common in the Permian in west Texas. Oil prices drive the economics of drilling in that region. The resulting gas production was pressuring prices as well as causing more flaring (watch Stop Flaring). 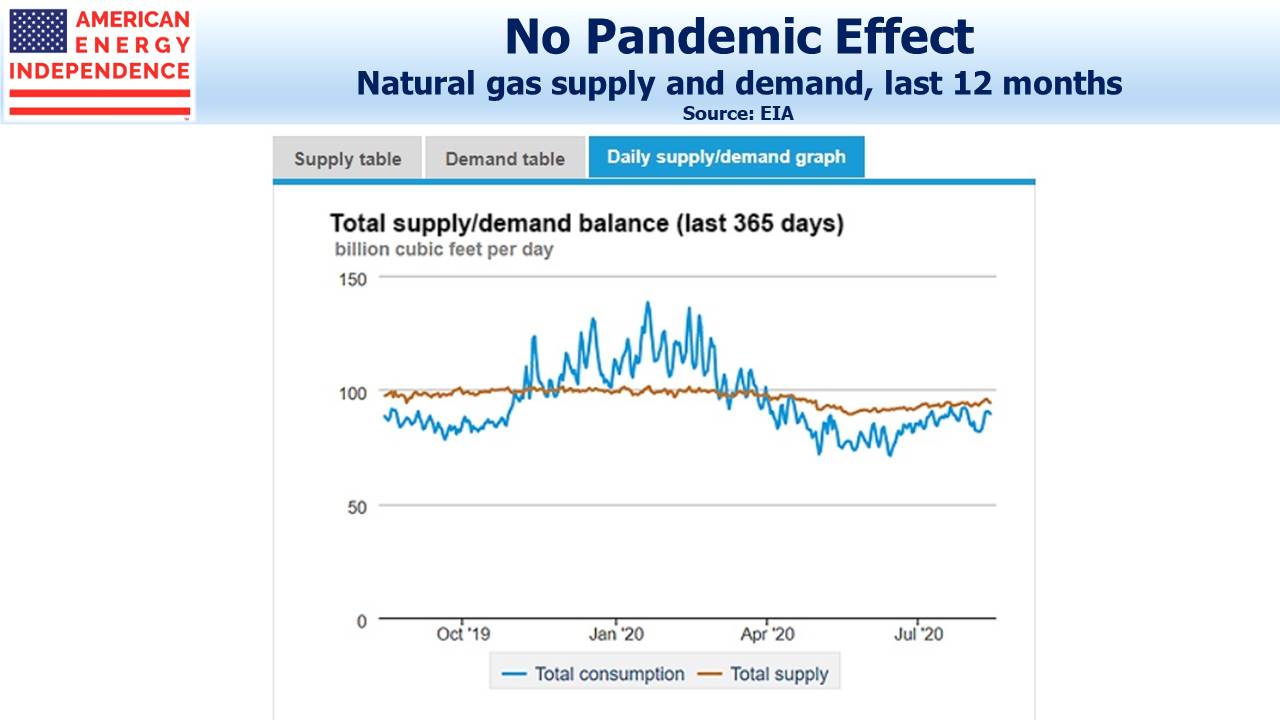 The second factor relies on a Biden administration, which is looking the more likely outcome based on recent opinion polls. The thinking is that a Federal initiative to lower CO2 emissions will start with accelerating the phase-out of coal-burning power plants. This trend has been under way for several years, and represents the easiest steps an incoming President Biden could take to fulfill campaign pledges on clean energy. 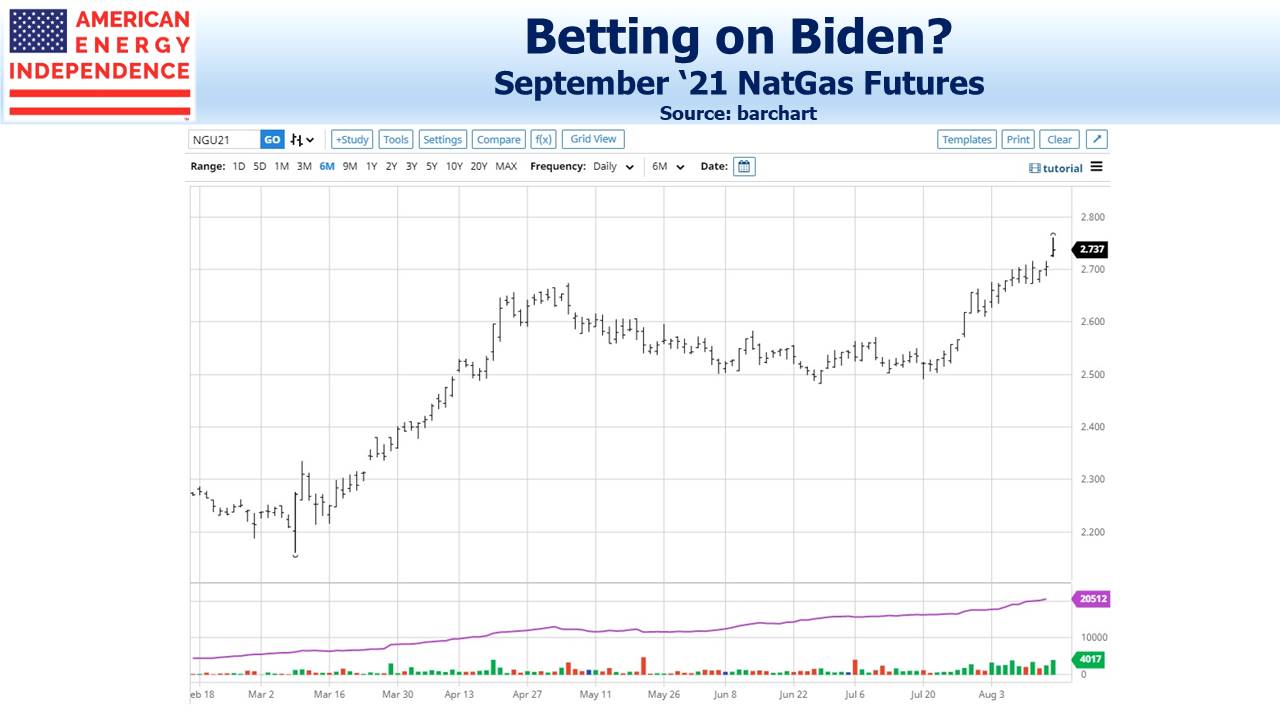 Natural gas power plants typically release half the CO2 emissions of coal for equivalent energy production, and are also free of particulate matter and other pollution such as nitrogen oxides, sulfur dioxide, mercury and other hazardous substances that the local population inhales.

The Biden Plan for Climate Change targets “net-zero emissions no later than 2050.” However, the Biden-Sanders Unity Task Force says, “Democrats commit to eliminating carbon pollution from power plants by 2035.” A Biden administration would be under pressure from extreme liberals to adopt the more aggressive target, which Citi believes is likely. 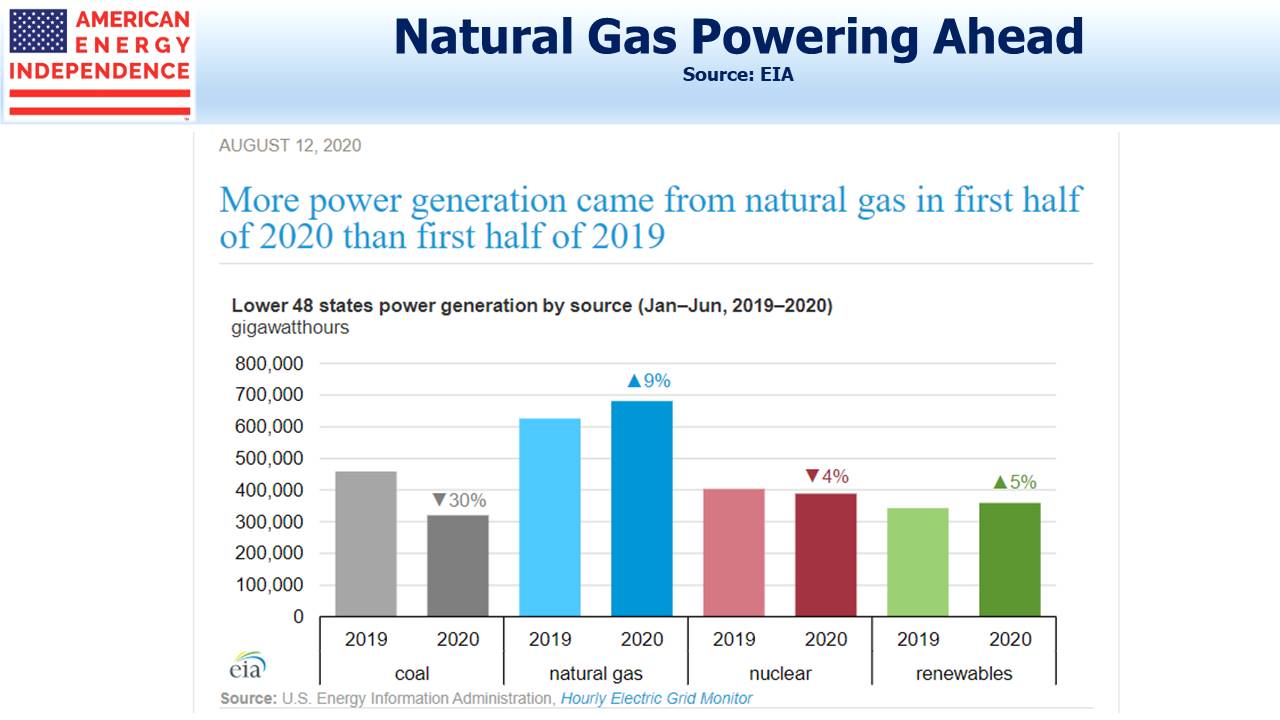 Citi Research calculates that retiring the nation’s coal plants at a uniform rate would take approximately 10 Gigawatts (GW) of power offline annually. Assuming these plants are running at 48% capacity, as was the case last year, the country would need to add 4.8 GW of new natural gas power every year, requiring about 1 Billion Cubic Feet per Day (BCF/D).

Foreign demand is also increasing — both China and India have long term plans to use more natural gas. Nord Stream 2, which is being built to supply more Russian gas to Europe, continues to draw U.S. sanctions which may yet impede its ultimate completion.

Last year, the U.S. produced 92 BCF/D of natural gas, consuming 85 BCF/D domestically with the difference made up by exports (5BCF/D) and withdrawals from storage (1.4 BCF/D). Decommissioning coal plants could increase domestic demand by 1% or so annually.

So far, cheap natural gas has motivated the switch away from coal. Citi expects higher prices to reduce the economic advantage, but also believes this will stimulate increased production by 2022.

Although Trump’s election victory was welcomed by energy executives, their enthusiasm for a Republican administration freed their animal spirits in recent years, and investors have borne the cost. A pro-fossil fuel administration has been an excuse for many upstream and a few midstream companies to dump financial discipline and allocate capital with overly optimistic assumptions.

It may seem perverse, but a Biden victory could be good for pipeline investors, because it would impose a more cautious  assessment of new projects. An industry held responsible for climate change by extremists in the president’s party would more likely be parsimonious in spending its cash. 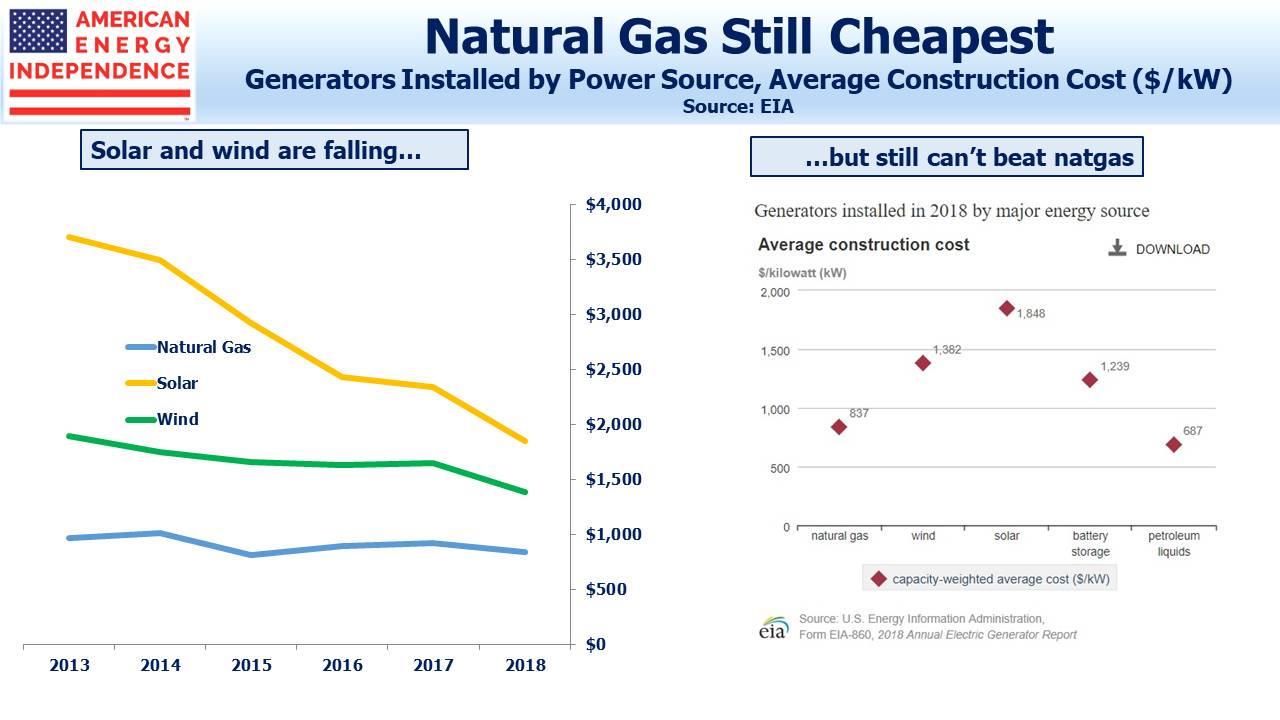 New natural gas power plants retain a substantial cost advantage over renewables, even after many years of subsidies. It’s likely that a sharp increase in solar and wind farms, along with the associated power lines, will collide with the same NIMBY opposition through court challenges. Energy infrastructure that is already installed, such as natural gas pipelines, has an advantage.

Much can change over the 79 days until the election, but pipeline stocks have been outperforming the S&P500 since earnings were kicked off by Kinder Morgan last month (see Pipeline Earnings Provide A Boost). Dividend yields of 8-9% are drawing buyers who are looking beyond the opinion polls.

There’s no reason for equity investors in midstream energy infrastructure to be scared of a Biden presidency (listen to our recent podcast, Joe Biden and Energy). Bond investors see little of concern — Enterprise Products Partners (EPD) for example recently issued 30 year debt at 3.2%, while their equity offers a dividend yield over 9%. Compared with the past four years, equity returns are likely to be much better.

We are invested in the names mentioned above and all the components of the American Energy Independence Index via the ETF that seeks to track its performance.