MLP Funds Made for Uncle Sam

Investors in MLP-dedicated mutual funds and ETFs yearn for a repeat, and probably feel entitled to one. Investors in such products are generally not looking for 5-10% either. Given what the sector has endured, the returns of 4-5 years ago would not be amiss. Last week the sector finally turned positive YTD — such optimistic thoughts do not seem out of place.

Those hoping for such may want to consider their choice of vehicle. MLP-dedicated funds are taxed as corporations, and so they pay taxes as well as other operating expenses before delivering their taxable returns to investors. These funds labored under some of the highest expense ratios in the industry during those banner years. Their tax expense is fully disclosed, but still in our experience poorly understood. Sitting with a financial advisor and educating him on a previously unfathomable expense burden still routinely elicits embarrassment and shock.

The chart below shows the 2013-14 expense ratios of some of the biggest MLP-dedicated funds. Although corporate tax rates are now lower, the structural inefficiency persists. If MLPs do manage a couple of years of outsized performance, investors are likely to be surprised at the expenses that are deducted from their returns. Getting the sector right but picking the wrong investment is an avoidable tragedy (see AMLP’s Tax Bondage). 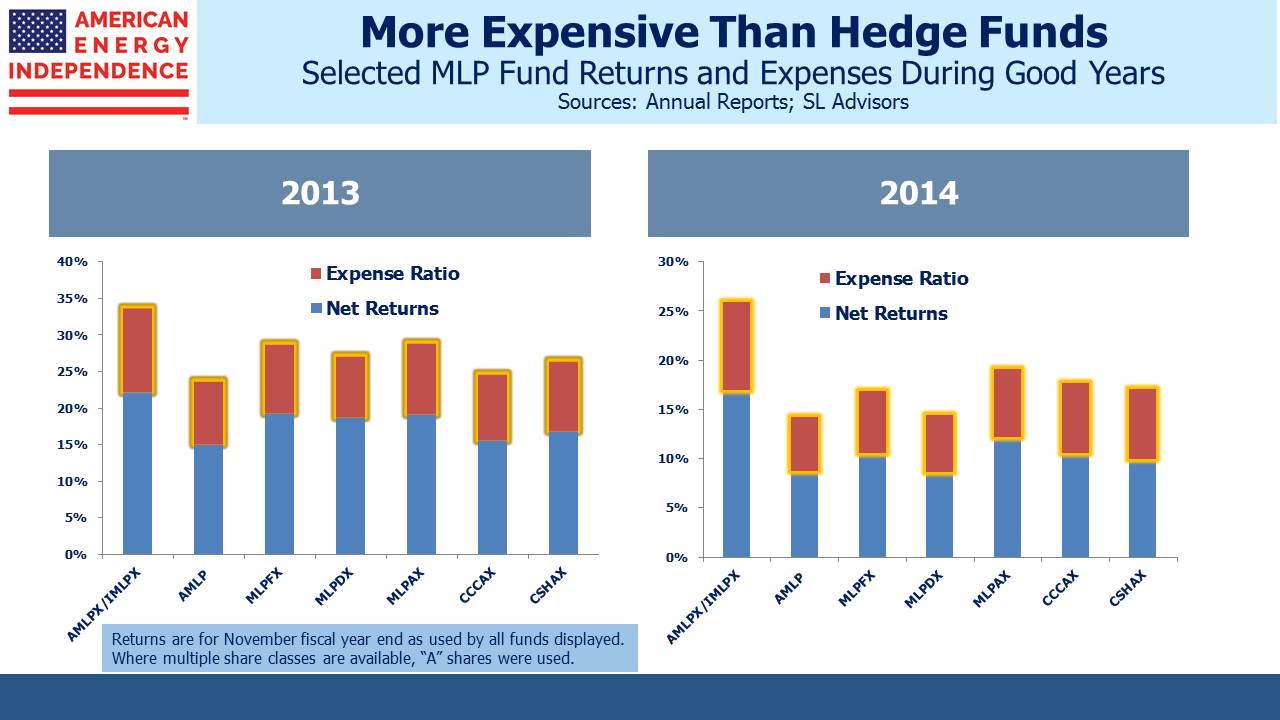 In 2013, the funds in the chart had an average expense ratio of 9.4%. With average returns of 18.2%, around a third of the gross return was eaten up in expenses, most of which was corporate taxes. Six years ago in The Hedge Fund Mirage, I showed how the profits had split very unevenly between fees to managers versus returns to clients. It surprised many, although not the fund managers who well understood and enjoyed the imbalance. The 2013-14 result in MLP funds was similar, although the offending expenses in this case are corporate taxes rather than manager fees. Nonetheless, considering that investors still have to meet their own tax liability on the net investment results, these look like products that the Federal government might have designed.

Promoters will explain that all MLP funds are taxable, which is true. When investing in energy infrastructure meant MLPs, that was perhaps a defensible argument. But many of today’s biggest energy infrastructure businesses have abandoned the MLP structure. They’ve found the investor base to be fickle, limited to older wealthy Americans who prefer income and are unwilling to finance the growth opportunities opened up by the Shale Revolution. These long-time buyers have been badly abused, with multiple distribution cuts and adverse tax outcomes when their MLP simplifies by combining with its corporate parent. It should be no surprise that MLP yield spreads versus ten year treasuries remain historically wide.

In May, Williams Companies (WMB) rolled up their MLP into their corporate parent (see Transco Dumps Its MLP). Enbridge (ENB) also simplified their structure on the same day. Both cited regulatory uncertainty caused by the FERC ruling (see FERC Ruling Pushes Pipelines Out of MLPs). But the difficulty of raising equity capital for an MLP is an issue for many.

As a result, tax-burdened MLP-dedicated funds are now confronting a shrinking set of opportunities. They are becoming an anachronism, as the energy infrastructure industry steadily leaves the MLP buyer behind in favor of a far bigger set of investors.

Moreover, the shrinking MLP universe is going to create further challenges for such funds (see The Alerian Problem). At the annual MLP conference in Orlando, many participants commented that an MLP-only index was now inadequate, no longer reflective of the energy infrastructure sector (see The Uncertain Future of MLP-Dedicated Funds). MLPs are less than half of North American midstream energy infrastructure, a point recently tweeted by Hinds Howard of CBRE Clarion Securities (@MLPGuy).

Managers of MLP-dedicated funds are telling their clients not to worry — as they would given their MLP-centric business model. But a shrinking index is rare in Finance, and offers the fund manager few good options: (1) Do nothing, and hope your clients tolerate a more concentrated portfolio with smaller names; (2) Start holding corporations as well as MLPs. This would require an ingenious explanation, because you’d now have taxable corporations sitting in a tax-paying fund delivering taxable returns to investors, a solution with poor optics; (3) Switch to a broader index and become RIC-compliant. This is the nuclear option, since it requires an MLP-dedicated fund to shed 75% of its holdings in order to come under the 25% MLP limit necessary to be RIC-compliant. If the $10BN Alerian MLP ETF (AMLP) sold $7.5BN of MLPs, they’d find that by the time they were done with that, for MLP prices, down is a long way. It’s unlikely they could seriously contemplate such a choice — their investors should hope they never do.

AMLP is the biggest of these flawed funds. In 2013-14 its expense ratio was 8.6% and 8.8% respectively. Today, AMLP has modest unrealized losses; a continued recovery in the sector will soon turn these into gains, resulting in AMLP once again incurring a Deferred Tax Liability along the lines of 2013-14. Since it’s close to the inflection point at which it becomes a taxpayer, shorting AMLP exploits the attractive asymmetry of a tax drag impeding its rise, while it will still reflect the full force of a market drop. It’ll rise at approximately only 77% of the index, and fall 100% of it. AMLP as a short can be combined with a long position in a portfolio of energy infrastructure corporations, or even with a correctly structured, RIC-compliant fund with no tax drag. Such a paired trade combines long positions focused on energy infrastructure corporations, which have very strong fundamentals, with a short position focused on the MLP structure than is increasingly being abandoned.

We are long ENB and WMB. We are short AMLP.