In its August 2018 edition, The Utility Forecaster warns readers to approach MLPs “with caution.” Too risky for income investors is their conclusion. MLP buyers have been badly abused, and Chief Investment Strategist Robert Rapier reminds readers of the many “simplifications” that triggered unwelcome tax bills, as well as the multiple distribution cuts. Without doubt, MLP prices have followed distributions.

In one important respect though, Rapier adopts a simplistic yet incorrect explanation. “…during a long downturn in oil and gas prices, contracts expire and MLPs had to renew agreements under less favorable terms. Many MLPs found themselves doing what was once unthinkable – they had to cut distributions.”

It’s conventional wisdom that the 2014-15 oil collapse hurt pipeline company operating earnings, which caused payout cuts. But the numbers don’t support this narrative. The Kinder Morgan (KMI) chart below shows their Distributable Cash Flow (DCF) per share alongside a significantly more volatile stock. KMI’s DCF per share is little changed from 2015 to 2016, but the share price fell by half. They cut their payout twice: once when combining Kinder Morgan Partners (KMP) with KMI (“simplification”, in which KMP investors received KMI stock with a lower payout as well as a tax bill); and again later when KMI cut its dividend. KMI was learning that MLP investors want income over the promise of growth. 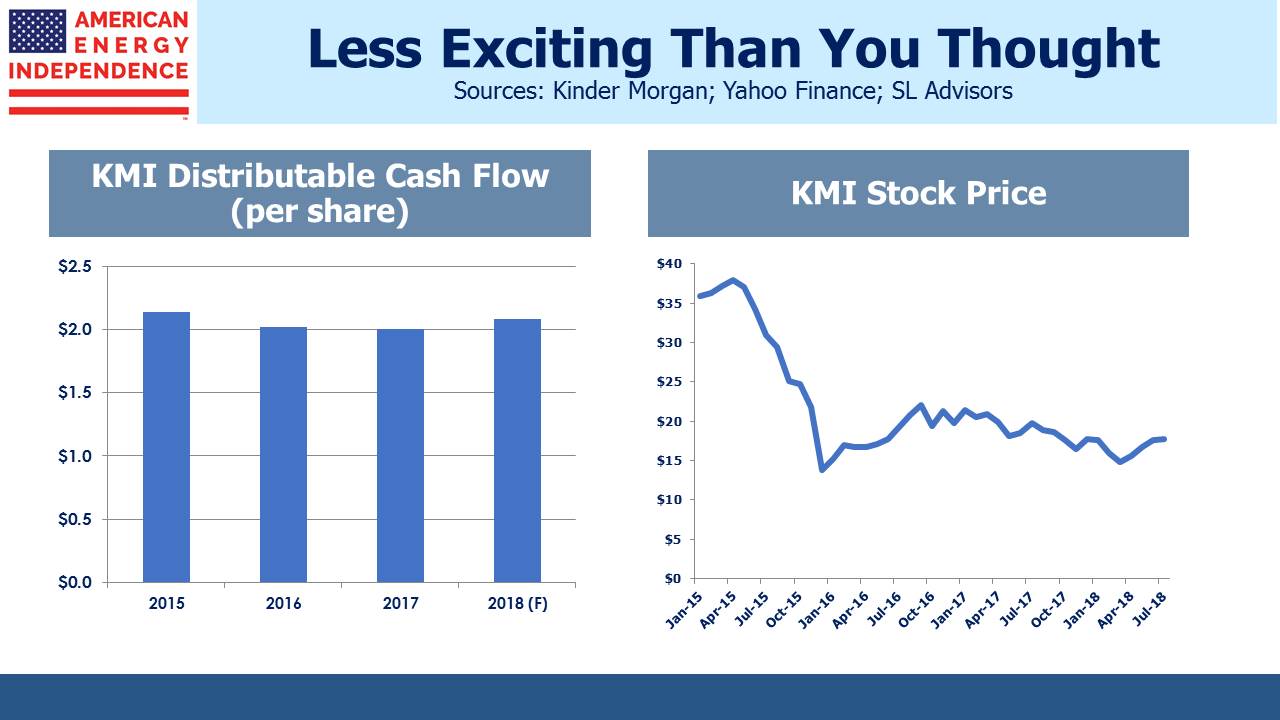 To fund their growth projects, KMP was paying out most of its DCF and then seeking to recoup some of it through secondary offerings.  In effect, investors were being asked to reinvest a portion of their distributions back into the company. Many holders found this unattractive, since they spend the income. So KMP’s yield rose, which made issuing equity too expensive. KMI concluded MLP investors no longer suited their purpose, and left to become a corporation. Today, KMI yields 5.1%, with a payout more than 2X covered by its $4.7BN DCF.

MLP buyers can be focused on distributions to the exclusion of anything else. Two recent examples highlight:

In late July, American Midstream Partners (AMID) slashed its distribution by 75% so as to, “…significantly reduce leverage, provide capital for strategic growth opportunities, and create long-term value.” Although these all sound like desirable objectives for a total return investor, AMID’s stock fell 43%.

Meanwhile, Hi-Crush Partners (HCLP) tripled its distribution and now yields 23%. The higher payout is unlikely to persist, but if it’s sustained for a year the company will convert to a corporation. Whether or not this is good for investors, its stock rose 28% on the day of the announcement.

The chart from Bank of America is even more striking. On the MLPs they cover, they show steadily growing EBITDA with improving leverage, alongside a declining Alerian MLP Index. Falling MLP distributions clearly drove index performance more than improving financials. 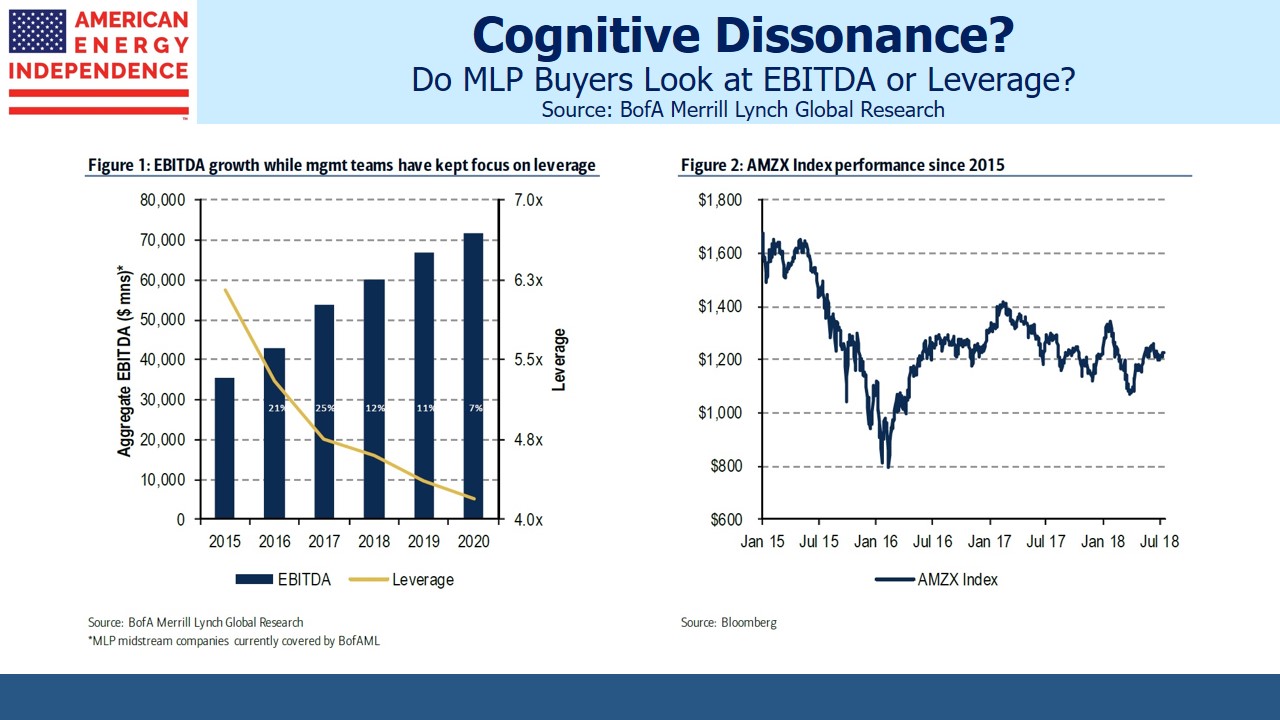 It’s as if MLP investors look at payouts and little else.

Probably the simplest measure of MLP payouts is to look at dividends on the Alerian MLP ETF (AMLP), which are 30% lower than in 2015. 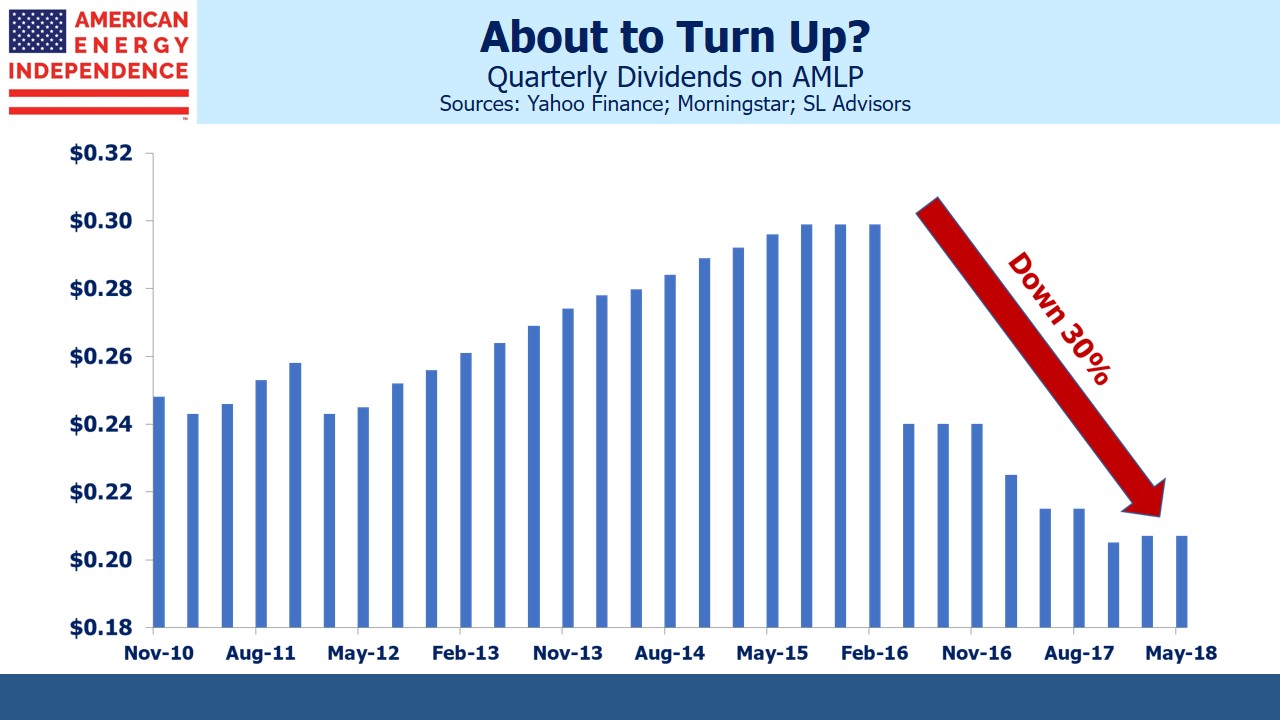 There were nonetheless some companies whose operating performance sagged. Plains All American (PAGP/PAA) relied in part on its Supply and Logistics division to support its distribution. When arbitrage opportunities dried up in 2016-17, almost $800MM in EBITDA evaporated, leading to a second distribution cut. Today, increased Permian volumes are boosting cashflows once more. On last week’s earnings call they forecast 2019 EBITDA growth of 14-15%.

But episodes such as PAGP were the exception – operating results for the most part held up.

As memories of the 2014-15 bear market recede, we believe the conventional explanation for it will shift. MLP prices didn’t collapse because of weak operating performance. They fell because DCF was redirected to pay down debt and finance new projects, all to achieve growth (see Will MLP Distributions Pay Off?). Income seeking MLP investors don’t want their income redirected in this way. Hence, persistently weak MLP prices which have led the shift to a corporate structure for those companies wishing to access a far larger pool of buyers.

BofA Merrill is forecasting 2016-20 distribution growth for 27 of the 32 midstream infrastructure names they cover. JPMorgan forecasts 6-10% growth 2017-19. We expect our American Energy Independence Index to grow its dividends by 9% this year and 11% in 2019.

These forecasts are supported by growing pipeline demand. There are bottlenecks in moving crude oil and natural gas out of the Permian Basin in west Texas, and in getting natural gas out of the Marcellus in Pennsylvania. New pipelines to transport Canadian heavy oil from Alberta continue to face political challenges. The Shale Revolution is driving volumes higher.

With pipeline demand and dividends both growing, the sector is poised to continue its rally.

We are invested in KMI and PAGP. We are short AMLP.

Includes corrected text and a revised chart compared to an earlier version, with respect to Kinder Morgan