It Takes Energy To Keep Up With Inflation

Pipeline earnings last week provided further support for the bull market in energy. Cheniere is +67% so far this year. The strong global market for Liquified Natural Gas (LNG) caused them to increase their 2021 EBITDA guidance to a midpoint of $4.8BN, up $0.1BN. They also provided 2022 guidance of $5.8-6.3BN. The company has signed several long-term LNG contracts recently – Friday’s press release announced a 17 year deal with Sinochem to provide up to 1.8 million tons per annum. In recent weeks they’ve announced 13 year deals with Glencore and ENN LNG of Singapore.

Cheniere continues to be an attractive investment in spite of this year’s sharp rise. The completion of a sixth “train” (the name given to an LNG liquefaction unit) at Sabine Pass looks to be on track for 1Q22. Their growth capex needs are falling sharply, which driving free cash flow. 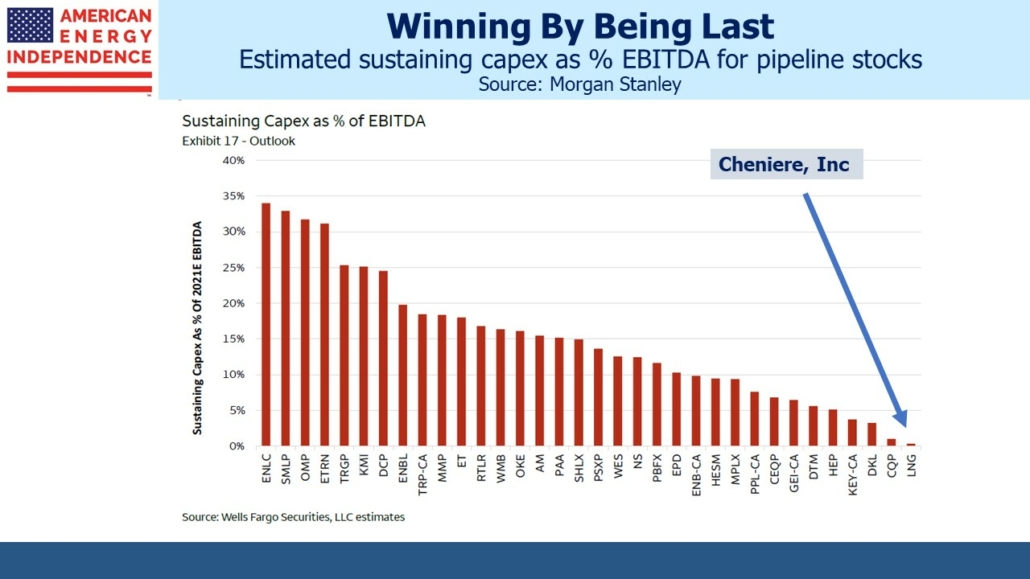 Morgan Stanley produces a chart of estimated sustaining capex as a % of EBITDA – what each company needs to reinvest annually to maintain its profitability. Cheniere’s situation is the best in the industry. Their stock price doesn’t yet reflect these very strong fundamentals.

The energy crisis engulfing much of the world has prompted Asian buyers to lock in long term supplies of LNG. It demonstrates that natural gas is uniquely situated among fossil fuels to benefit from the energy transition – when burned it generates typically a third to a half less CO2 than coal and doesn’t cause the same type of local pollution. Natural gas power plants are also easy to start up when weather-dependent renewables suddenly stop producing.

Alex Epstein, who wrote The Moral Case for Fossil Fuels and routinely exposes the sloppy thinking of environmental extremists, refers to solar and wind an “unreliables”. Epstein lives in California, so has some experience with expensive and unreliable power. The Golden State recently announced plans to increase its natural gas storage capacity to assure reliable power this winter. They’re finding the limits to weather-dependent power. 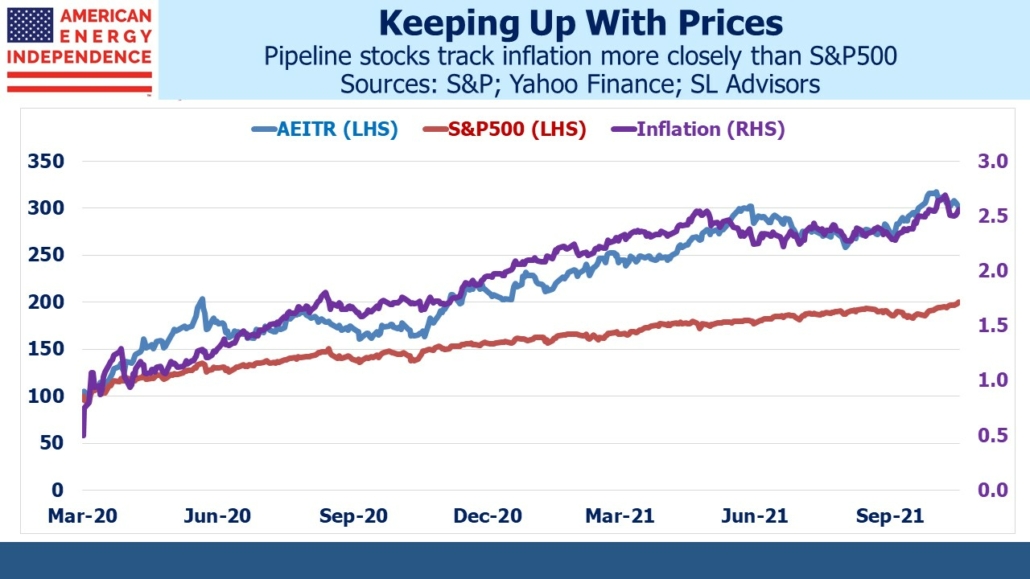 Oil and gas are higher because of rebounding demand, but the energy transition is another important factor. For years public policy and climate extremists have warned of stranded assets as renewables render reserves of traditional fuels uneconomic. Al Gore, who’s been warning us about climate change for decades, describes oil and gas reserves as “a subprime carbon bubble of $22 trillion, based on an absurd assumption that all of those carbon fuels are going to be burned.” Although Al Gore doesn’t drive energy sector capital allocation, extreme views like his are boosting returns by curbing new investments.

High energy prices are contributing to elevated inflation. Although Fed chair Jay Powell is retaining the “transitory” narrative, supply chain problems did not drive LNG shipments as high as $56 per million BTUs in Asia (see Energy Demand Drives Earnings Higher). Equivalent US prices are under $6. Pipeline investments have performed well as a hedge against inflation since the market low of March 2020. Although the S&P500 has rallied strongly since then, the American Energy Independence Index (AEITR), representing the North American energy infrastructure sector, has a visually better fit with inflation expectation (defined here as ten year forward inflation derived from the yield on ten year treasuries minus TIPs).  Daily returns on the AEITR versus inflation are correlated at 0.43 during this time, versus only 0.31 for the S&P500.

In his press conference last week, Chair Jay Powell once again emphasized that the FOMC expects inflation to moderate, although some commentators assessed slightly less conviction in his delivery. Eurodollar futures continue to forecast short term rates 0.65% higher by the end of next year, although a week ago expectations were even higher. The sharp flattening of the yield curve in several markets appears to be at least partially due to some hedge funds exiting losing trades in a hurry (see Balyasny, BlueCrest, ExodusPoint Ground Traders Over Losses). Nonetheless, the market is still expecting the Fed to concede a policy error and quickly raise rates. 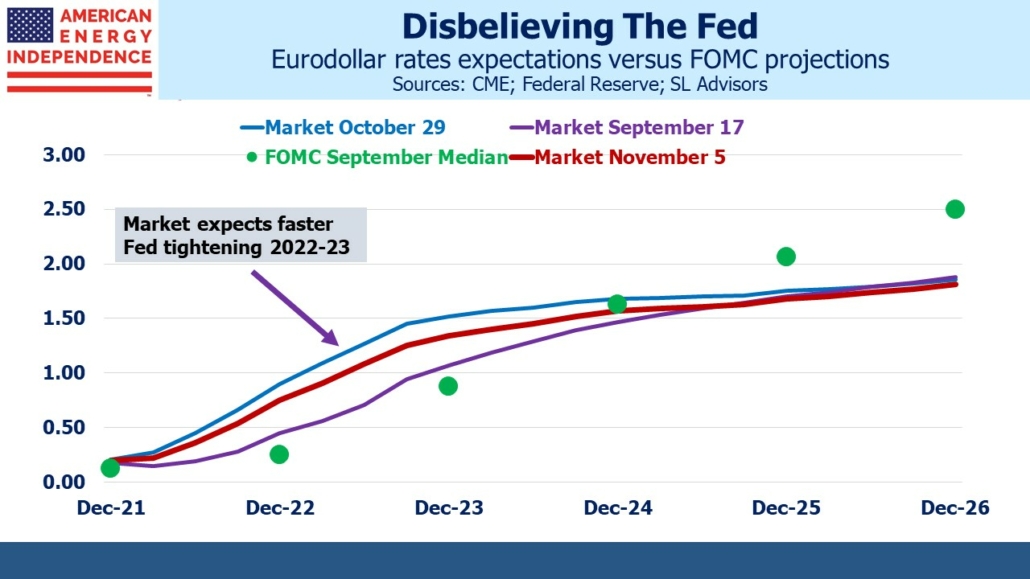 Compared with past interest rate cycles, the Fed is in a pretty good position. Neither the energy transition nor drawn out supply problems are issues to be resolved by raising short term rates. Those states and countries that have high renewables penetration (California, UK and Germany) also have high prices. Efforts to reduce CO2 emissions will result in more costly power, and the Fed shows no inclination to lean against this. 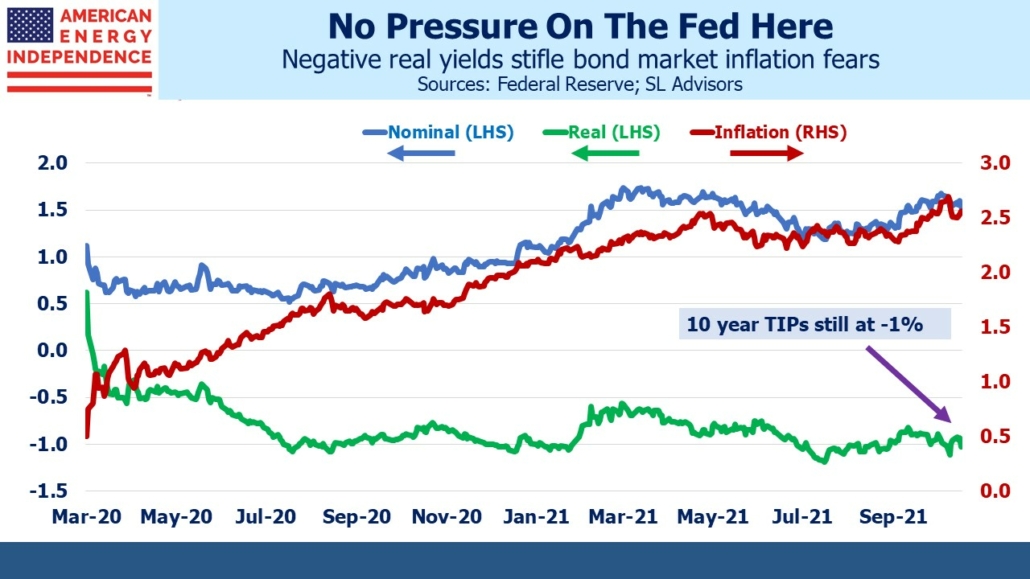 Moreover, negative real yields on treasury securities are leading to persistent low interest rates. Although the Fed has made a mistake in waiting until now to curb its bond buying, there has been no visible penalty in terms of slumping bond prices. The traditional pressure from bond vigilantes is absent, because so much return-insensitive money is invested in fixed income. Stocks make new highs almost every day. So although financial professionals are taught about the evils of inflation from an early age, the pressure on the Fed that’s often cited is limited to criticism from Larry Summers and others. Absent any clear economic or market stress from rising inflation, the case for maintaining low rates until the pre-Covid level of employment is reached must seem compelling to Powell and many others on the FOMC.

What this means is that the Fed’s tolerance for inflation is likely to be higher than fixed income markets perceive. Combined with negative real rates, we’re a long way from where the bond market will offer an adequate return. This implies that stocks, and especially inflation-sensitive stocks, will remain the only plausible means of maintain purchasing power for a long time to come.