Maybe last week’s FOMC minutes had something for everyone. Some analysts seized on the consideration the Fed gave to tighter monetary policy: “They also noted that a restrictive stance of policy may well become appropriate depending on the evolving economic outlook and the risks to the outlook.”

On the other hand, the minutes noted that, “… the risks to the baseline projection for real activity were skewed to the downside.” They also noted upside risk to inflation.

It is a dovish Fed, regardless of their current hawkish tone. Getting monetary policy to neutral (estimated as between 2% and 3% based on Chair Powell’s recent press conference) with inflation running at 8% is hardly slamming the brakes on. That they may move to restrictive policy reveals their bias – maximizing employment is more important than stable prices. 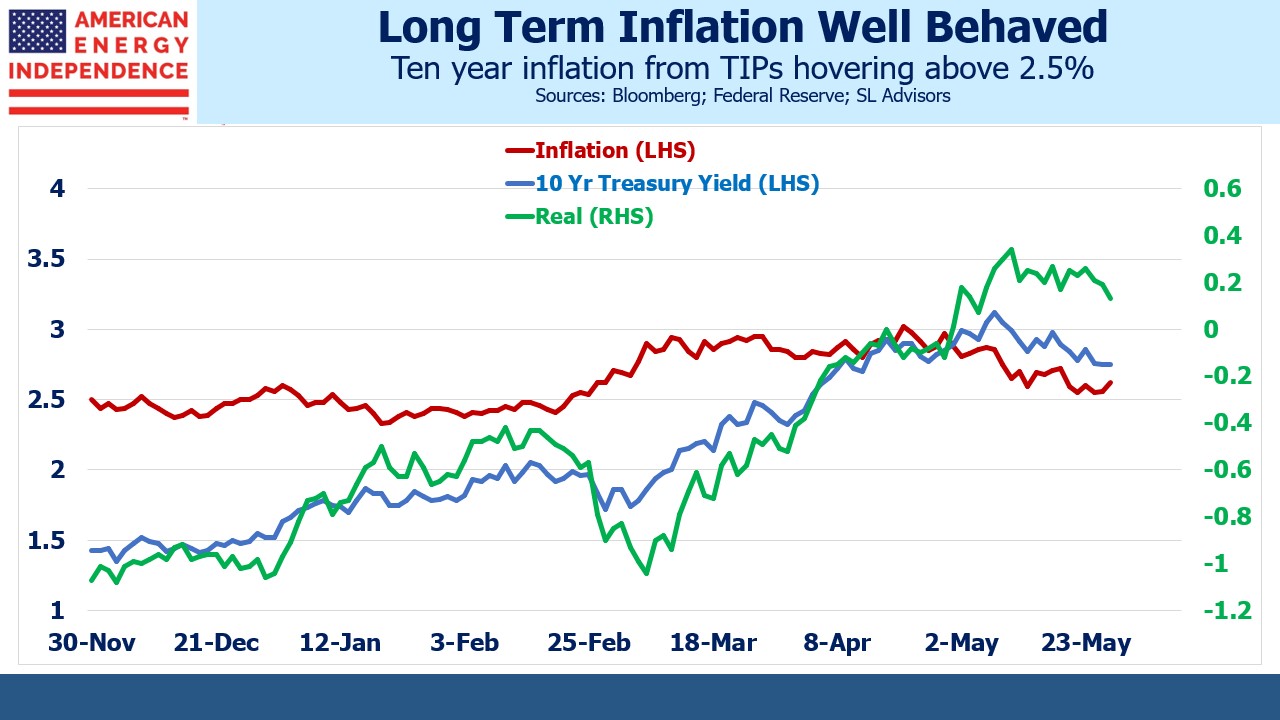 PCE inflation, the Fed’s preferred measure because unlike CPI it dynamically adjusts for actual consumption weights, is forecast by Fed staffers to be 2.5% next year and 2.1% in 2024. Although survey expectations on inflation are mixed the minutes reported that, “longer-term inflation expectations derived from surveys of households, professional forecasters, and market participants still appeared to be broadly consistent with the Committee’s longer-run inflation objective.”

It wouldn’t be hard for the FOMC to conclude that once short term rates are at neutral, ameliorating supply constraints will restore inflation to its prior 2% level.

There are signs of economic softness, if not yet weakness. Pending home sales on Thursday fell 3.6%. New home sales last week dropped 17%. A permanent shift to remote work has allowed Americans to spread out in this big country. But higher mortgage rates are beginning to take a toll. 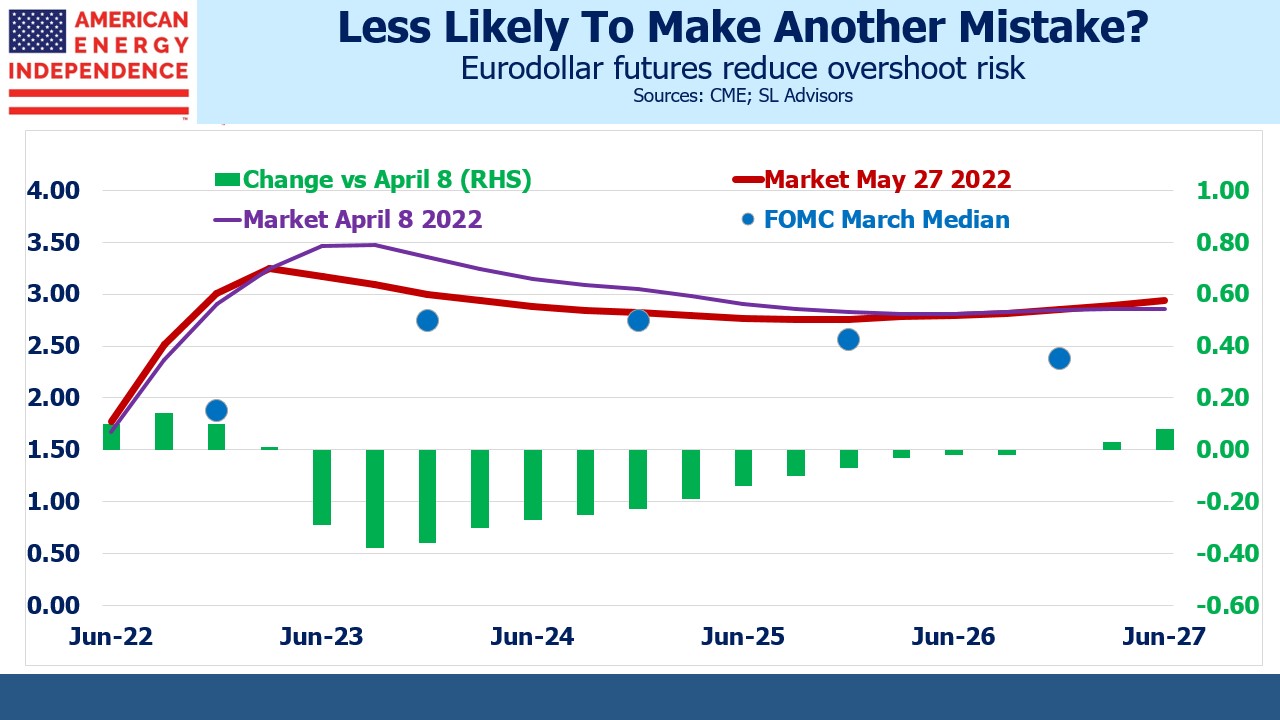 The eurodollar futures curve reflects lowered odds of a Fed-induced recession. In spite of some FOMC members’ hawkish statements, mid-2023 rates have dropped almost 0.50% from their highs in early April. A less inverted yield curve implies reduced odds of the Fed raising rates too fast and having to shift directions.

In fact, the improving inflation outlook offers the Fed greater flexibility to respond to any economic weakness by pausing future rate hikes. Two more 0.50% increases are assured, but beyond that it’s data dependent. The FOMC would be happy to avoid moving above neutral. Therefore, the risk is that inflation doesn’t return co-operatively to its long-run 2% target.

The FOMC core bias in favor of employment means the eurodollar yield curve is still likely to revert to a normal, positive slope.

Pipeline companies are well positioned to benefit from higher inflation, since a substantial proportion of pipeline contracts are regulated and have built-in PPI tariff escalators. To cite one example, Magellan Midstream Partners (MMP) is about to benefit from a 6% tariff increase on July 1. They’re likely to see an even bigger jump in a year’s time, based on the likely path of PPI (running well ahead of CPI). JPMorgan recently upgraded the stock.

In other news, Wednesday’s blog post (see ESG Has No Clothes) resonated with many readers who see ineffective hypocrisy in much of today’s virtue-signaling behavior. Adam Vaughan on Twitter noted the incongruity of G7 environment ministers opposing fossil fuel subsidies while the UK doubled tax relief for new oil and gas production. Furthering confusion, the UK government announced a “windfall tax” on energy company profits.

Why would any energy company make long term investments when public policy is so capricious?

JPMorgan reported that attendees at a recent conference felt energy security was displacing ESG concerns. ESG and climate change have always seemed to be concerns for those at the top of Maslov’s pyramid (see Russia Boosts US Energy Sector). If you’ve solved all your other problems, you can get to that one. This is why emerging economies are plowing ahead with increased energy consumption from all sources, including coal. They want to raise living standards. And it’s why John Kerry, Climate Czar, is so well suited to his role. He has solved all his other problems. 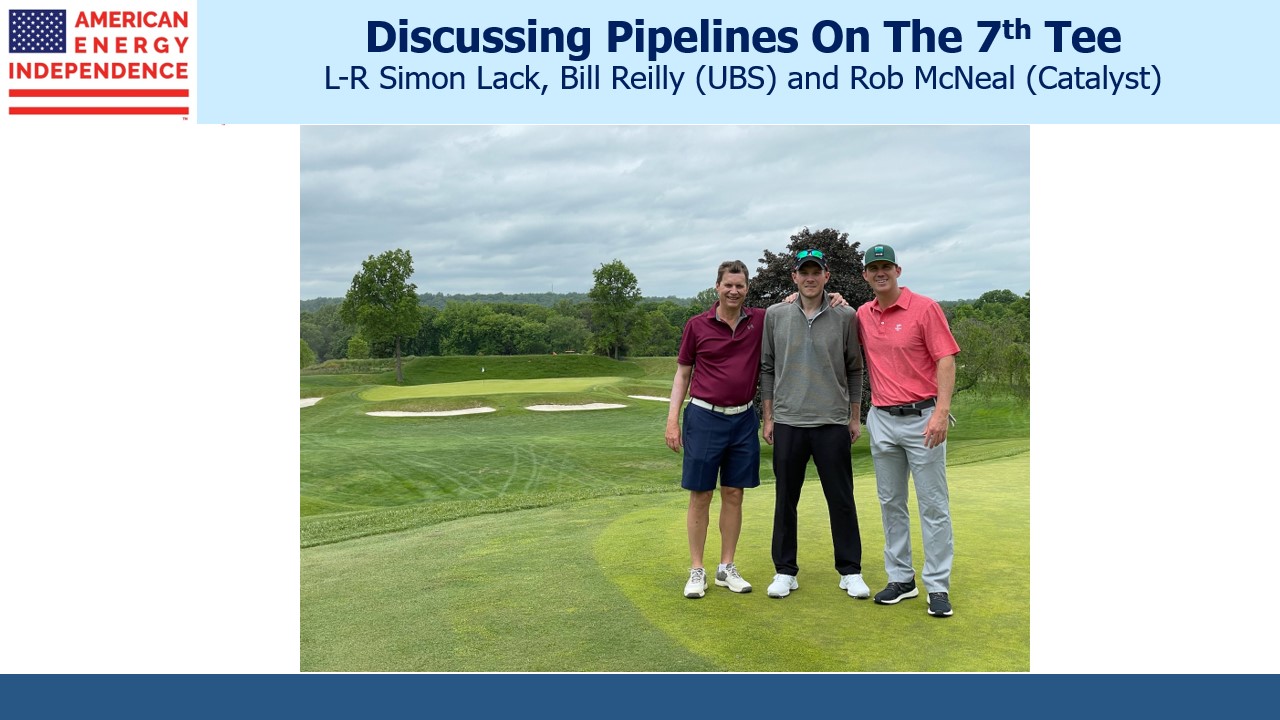 Finally, for those who worry that the principals of SL Advisors afford themselves too little time for some R&R, the photo of a recent golf outing at Echo Lake Country Club should assuage such concerns. Your blogger was happy to host a convivial afternoon of golf with Bill Reilly, Director, Mutual Funds Program Manager at UBS and Rob McNeal, Head of Intermediary Distribution at Catalyst Capital Advisors. Friends of the firm are always welcome guests.