The impact of GameStop (GME) will resonate far beyond a few short-selling hedge funds. It’s a rare breed of manager that runs exclusively or mostly short positions. Behind the forensic financial analysis that’s required lies a deep skepticism of company executives. They see a dark side to human behavior lurking out of sight to most of us. Short sellers often believe they’ve uncovered a fraud – they’re not just looking for a quick 10-20% gain, they think the stock is a zero. One short seller was so disgusted at the failure of men’s clothier Joseph A Banks to collapse that he abandoned the industry for a few years to rear chickens (see A Hedge Fund Manager Finds More to Like in Farming). 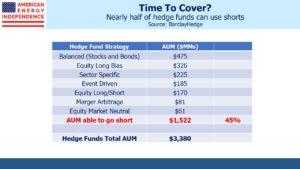 Shorting stocks isn’t limited to specialist funds such a Kynikos, run by Jim Chanos. The original hedge fund created by A. W. Jones was a long/short fund. It sought to neutralize its exposure to market moves by balancing long and short positions. The objectives of hedge funds have evolved over the years. They were originally described as Absolute Return funds — reliably positive, inspiring AR Magazine, which has since folded into Institutional Investor. The 2008 financial crisis showed hedge funds could lose money like anyone else, so marketing shifted to Relative Returns, except those were relatively poor (see Hedge Funds: Still Fleecing Investors with Expensive Mediocrity). In recent years they’ve settled on delivering uncorrelated returns, which Melvin Capital provided so spectacularly last month (reportedly down 53%).

Whatever the description, hedge funds are supposed to offer something different. For a broad array of strategies, that includes carrying some short positions.

Shorting stocks is hard. Almost everyone else involved with the company is against you. Investors in the stock, research analysts and the company itself all regard the short’s failure as vindication of their work. In Germany, the securities regulator was so incensed at negative press coverage of Wirecard that it sued two Financial Times journalists. The lawsuit was only dropped after Wirecard itself confirmed the €1.9BN hole in its balance sheet.

The risk in shorting is asymmetric – as the price falls, your position size shrinks as well. If it rises, your losses are theoretically unlimited, and can reach unfathomable depths as we just saw.

Hedge fund managers regularly describe the difficulty in adding value from short positions. Betting against a company certainly requires more care and attention than other positions. I’ve always thought managers would often be better off simply focusing on long ideas and hedging out the market risk with S&P futures. By focusing their often-considerable analytical abilities on long positions, maybe they’d do better.

Of $3.4TN in hedge fund assets under management, 45% can be estimated as using short positions in some form. Scraping data from social media sites to identify the crowd’s next victim will quickly become another tool. But shorts just became more risky than previously imagined, and this will have consequences.

A year ago, GME was under $4. A short-seller might have considered a doubling, or perhaps even a quadrupling in price as a plausible worst outcome, and size the position accordingly. For GME, this would have been inadequate by an order of magnitude, since it rose over 100X. The standard definition of “how bad can it get?” just changed.

The social media crowd is reveling in its newfound power. They believe they have launched a form of high-tech populism taking on what they regard as the financial establishment, although hedge fund managers used to think that was their role. We continue to scour chatrooms hopefully for signs they’ll corner the pipeline sector. It must be ripe for their exploitation.

Hedge fund managers will adapt. They’ll have smaller positions, will use options to control risk and will follow DeepF***ingValue on r/WallStreetBets. But shorting stocks has changed forever. Finding a fraud won’t make as much money, because of tighter position limits. Out of the money option volatility will be high, as the value of tail-risk protection rises. Borrowing stock to short may become harder.

Hedge fund investors will add the Melvin question to their due diligence questionnaire. Prime brokers will tighten their financing requirements for most individual short positions. Nobody wants a surprise like this. Being associated with a subsequent GME-like debacle will abbreviate careers.  So everyone will avoid it. There will be less shorting of stocks.

This will cast a chill over the hedge fund business. Many of the smartest people in finance run hedge funds, and they’ll continue to prosper personally. But hedge fund returns, which any casual observer can see have mostly failed to justify their fees for almost two decades, now face an additional headwind.