The red-hot housing market is a topic of cocktail conversations, at least among those comfortable to take that step back to normalcy. The S&P/Case-Shiller U.S. National Home Price Index (C-S) sports a 14.6% year-on-year increase through April. Residential real estate benefits from numerous sources of government support. Property taxes are tax-deductible up to $10K (although in NY and NJ the benefit is derisory because taxes can be 2-3% of a home’s value). Mortgage interest is also tax deductible, and the Federal government underwrites the credit risk of conforming mortgages which lowers their interest rate. Add to that the $40BN in monthly MBS purchases, part of the $120BN in long term bonds the Fed is buying which acts to further depress rates. So on top of the various tax subsidies and guarantees, the Federal government is lending almost half a trillion dollars a year to home buyers. It’s no wonder home prices are rising.

The Fed measures housing inflation by relying on a survey by the Bureau of Labor Statistics on what monthly rent homeowners think their home could command if rented. It’s safe to say that Owners Equivalent Rent (OER) is not the subject of the abovementioned excited cocktail chatter because it’s a theoretical concept – the only element of the inflation statistics not derived from actual transactions. Its weaknesses are well documented and we won’t belabor them here (for more detail, see Why You Can’t Trust Reported Inflation Numbers). Suffice it to say that OER doesn’t reflect the cost of housing for the two thirds of households who choose to own their home. The S&P/Case-Shiller U.S. National Home Price Index has risen at an annual rate of 4.4% over the past two decades, versus 2.6% for OER. The Fed’s use of OER means it has persistently ignored inflation in the biggest expense households face. 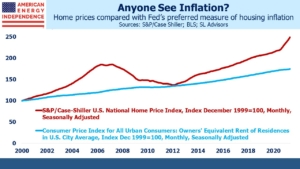 Although the FOMC is more in thrall to progressives than bond vigilantes nowadays, their full-on spiking of the punch bowl is making some increasingly uneasy. Boston Federal Reserve Bank president Eric Rosengren is worried that a housing “boom and bust cycle” will threaten financial stability. It’s hard to find any serious support for the Fed’s continued buying of MBS in the financial community. Even the liberal wing of the Democrat party must conclude that few beneficiaries of housing inflation are likely to be found among their core supporters. 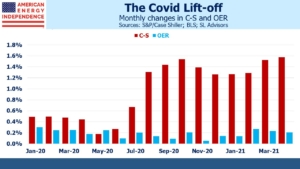 The continued strong housing market speaks to the imminent conclusion of at least this element of the Fed’s $120BN monthly bond buying. Expect the FOMC to curtail it during the third quarter, as a growing chorus of economists and investors warns of another housing bubble. Eurodollar futures priced in earlier monetary tightening following Powell’s press conference a couple of weeks ago, so that the yield curve now more closely resembles the forecasts from St. Louis Fed president James Bullard than Jay Powell (see The Fed, Thinking Fast Or Slow). But there’s still more downside price risk than upside for futures.

Switching to energy markets, those of us outside California will appreciate this priceless headline:  California Asks Residents to Avoid Charging Electric Cars Amid Power Grid Strain. The Golden state is pursuing altruistic energy policies – swearing off everything but solar and wind, yet unable to provide reliable power. One problem is they’re ahead of most of the world in shifting as quickly as possible to largely renewable power (2018 was 34%). Global greenhouse gas emissions continue to rise, mostly due to rising living standards and energy consumption in developing countries. To the extent that climate change is responsible for the heatwave across western states, Californians are enduring both the results of global warming and the costs of mitigation without any visible benefit.

Of course renewables aren’t directly responsible for California’s power shortages, although had they redirected solar and wind investments to modernizing their existing grid and boosting conventional power sources they’d be in a better place.

The energy transition is a multi-generational marathon. It’s not an endeavor that lends itself to a declaration of victory, although defeat will be recognizable. This will be a problem for politicians, but it’ll be interesting to see how enduring popular support is to phase out fossil fuels in California and elsewhere. The effort will need to last decades while the connection with changing weather will remain tenuous. Few other states will see much to emulate in their approach.