Canada’s struggles to get its crude oil to market have been a source of immense frustration if you’re an Albertan oil producer, or a huge success if you’re an anti-fossil fuels activist. Last week, Alberta’s premier Rachel Notley imposed almost a 9% cut in production in order to raise prices. Shortage of available infrastructure had opened up a price discount as wide as $50 per barrel between the bitumen-based Western Canadian Sedimentary Basin, and the WTI benchmark. Unusually, it led to Canadian producers asking the government to intervene.

The heavy, viscous crude from Canada’s oil-sands is reviled by activists because its extraction is particularly disruptive to the local environment, as well as requiring substantial energy inputs to heat it. The Obama Administration repeatedly held up the Keystone XL expansion because of its view that this type of crude should remain in the ground. Alberta has been frustrated at every turn in obtaining cost-effective transport for its output. Earlier this year, Kinder Morgan (KMI) gave up on their Trans Mountain Expansion, intended to increase pipeline capacity west to British Columbia’s Pacific coast. Navigating inter-provincial politics threatened to derail the project, and KMI managed to unload it on the Canadian Federal government not long before an adverse court ruling added further delays (see Canada’s Failing Energy Strategy). 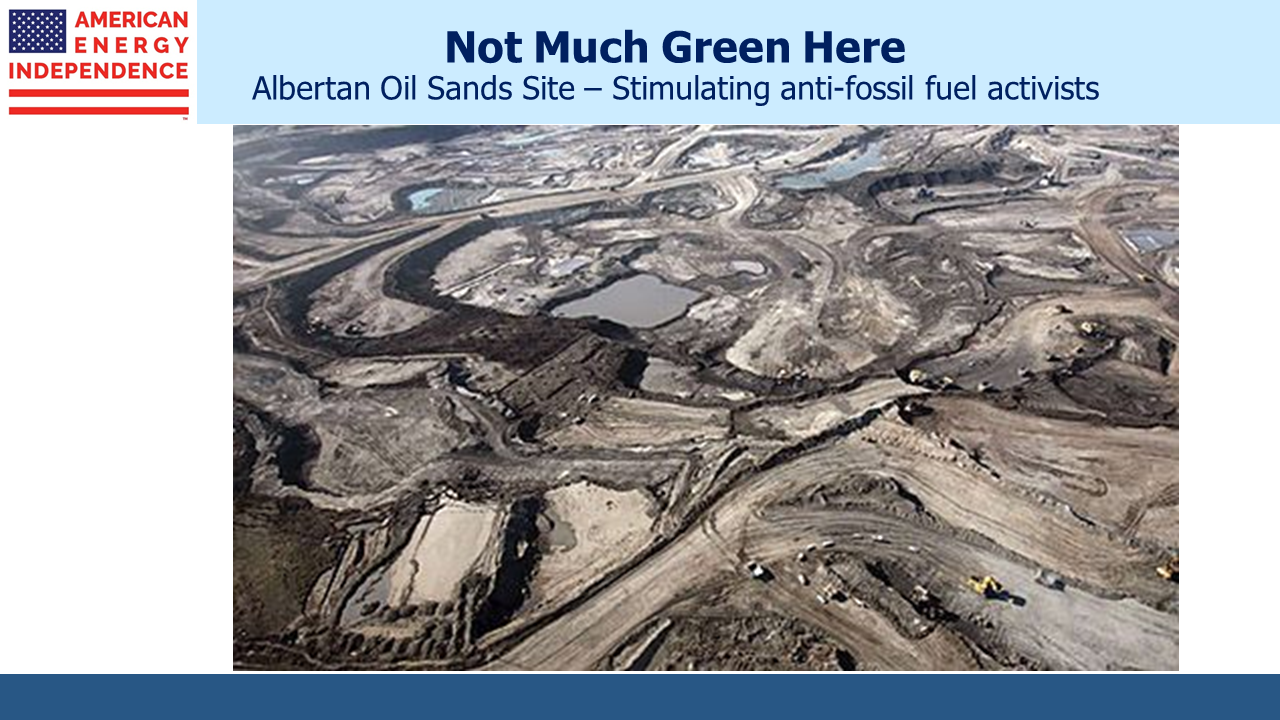 Canada has unique challenges, revealing the weak hand their Federal government has in dealing with its sometimes unruly provinces. But pipeline construction has been hampered in the U.S. too. Energy Transfer’s (ET) Dakota Access Pipeline (DAPL) was delayed by Obama because of concerns over its proximity to land held sacred by some native American tribes (others were supportive, generally depending on the likelihood of financial gain through the use of their land). Shortly after his inauguration Trump allowed DAPL to move forward. But ET has at times run afoul of regulators during construction, drawing hundreds of violations during the construction of two natural gas pipelines. The industry needs ET to do better.

Shortages of infrastructure in west Texas have led to flaring of natural gas as well as impeding the growth of crude production. The completion of new pipelines by late 2019 should help. The Energy Information Administration expects Permian output to grow by 600 thousand barrels per day next year, to 3.9 Million Barrels per Day (MMB/D). The new pipeline takeaway capacity could enable it to reach 5 MMB/D by 2020, bringing U.S. output close to 13 MMB/D.

New England suffers from too little investment in natural gas infrastructure, with the result that during cold winter months they import liquefied natural gas from Trinidad and Tobago (see An Expensive, Greenish Strategy).

In many parts of the country (apart from Texas and Louisiana), energy infrastructure is becoming steadily harder to build. The losers clearly include consumers, such as those in the north east who have to pay more for electricity. In Canada, clearly oil producers suffer from the steep discount on their production. But less growth in infrastructure increases the value of what currently exists. Because Permian crude can’t all get to its desired destination (usually Cushing, OK or Houston for refining/export) by pipeline, the price differential has at times exceeded $15 per barrel. Regional differentials can support pipeline profits, since when they exceed pipeline tariffs it reflects high demand. Plains All American (PAGP) has been able to charge higher prices on parts of its crude oil pipeline network in Texas for just this reason.

New pipelines enjoy network effects. Connecting a new pipeline to an existing network adds value by increasing destination choices for shippers. This has always represented a hurdle for new entrants to surmount. But the increasing role of judicial challenges by environmental activists serves to further entrench existing operators. The pipeline business is one in which companies needn’t worry too much about a disruptive new upstart taking market share. As a result, today’s big energy infrastructure companies are highly likely to be dominant for many years to come. If new pipelines are harder to build, existing pipelines must be correspondingly more valuable. An unintended consequence of pipeline opposition is to develop a pipeline oligopoly.

Last week Enterprise Products Partners (EPD) gave a presentation at a Wells Fargo conference which emphasized corporate (rather than MLP) measures of performance. By referencing more familiar terms, such as Cash Flow From Operations, rather than the MLP-oriented Distributable Cash Flow, they hope to draw more generalist investors to consider valuations, even while EPD has no plans to convert from an MLP to a corporation. We think it’s a good move – we recently highlighted EPD’s value using discounted cash flows (see Valuing MLPs Privately — Enterprise Products Partners). We also compared pipelines with buildings (see Valuing Pipelines Like Real Estate). A consistent theme from management teams is the disconnect between the strong fundamentals of their businesses and weak stock prices. 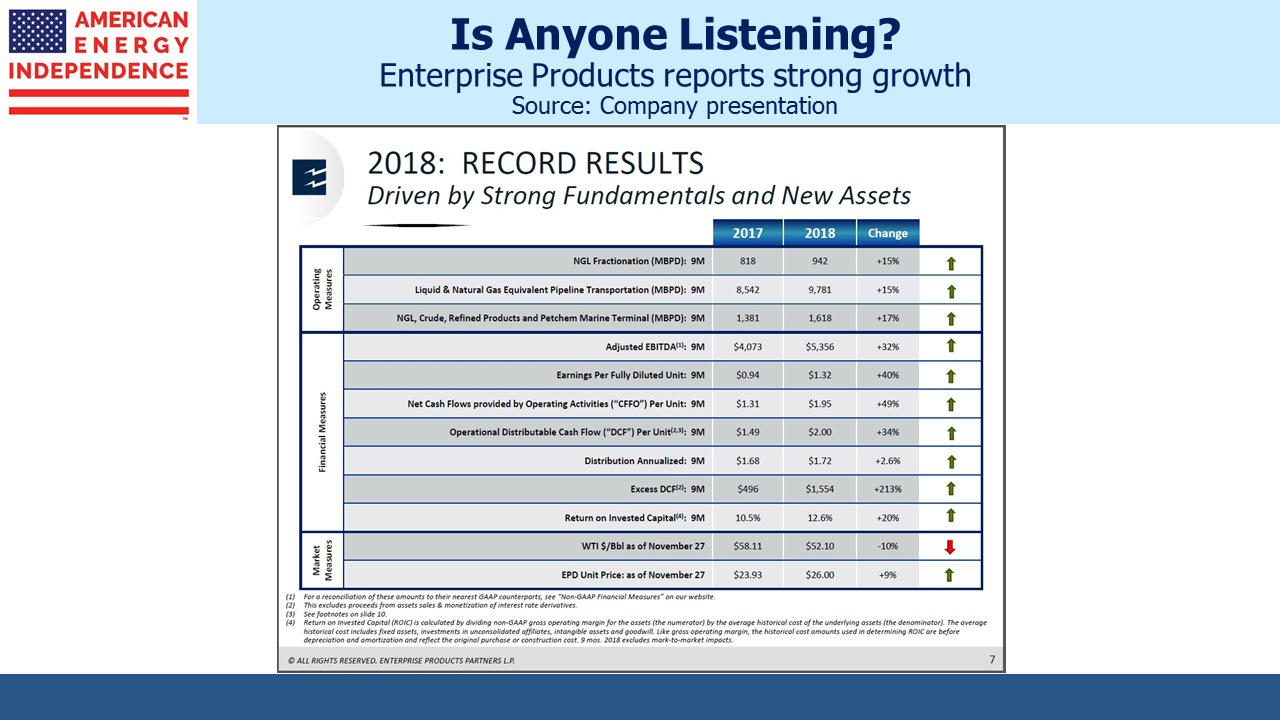 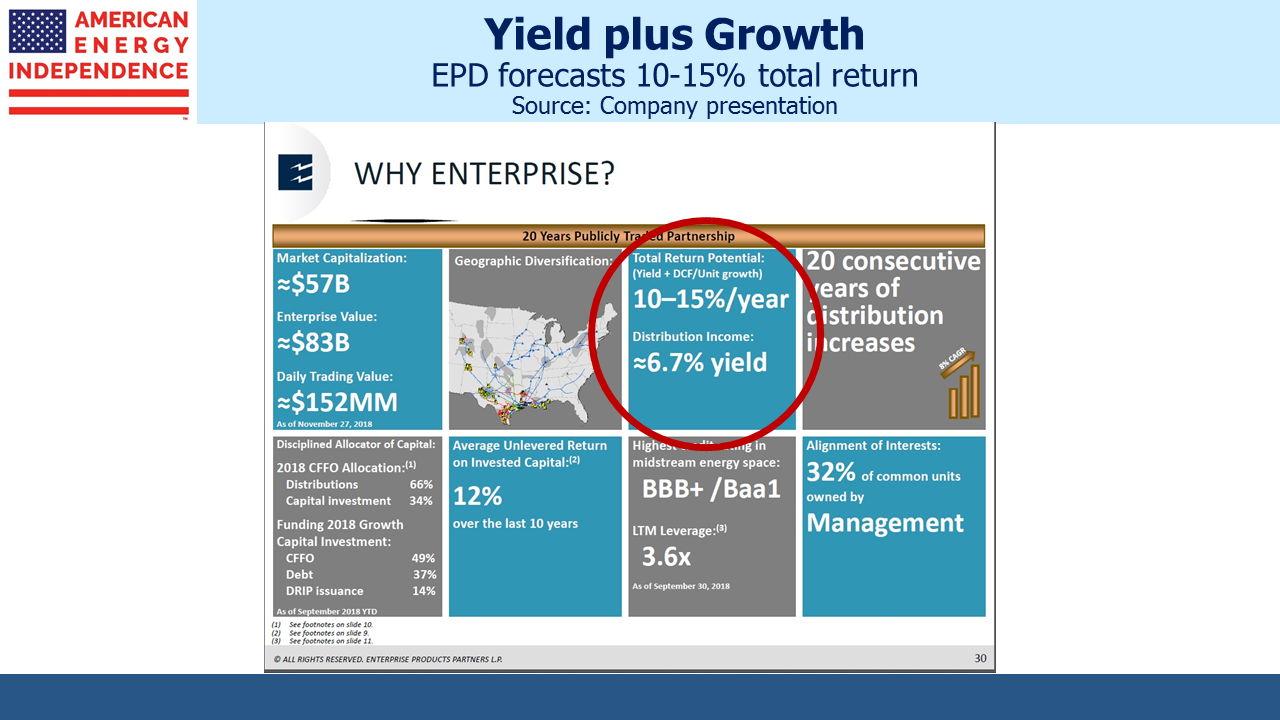 Retail sentiment remains poor. Our friend John Cole Scott of Closed End Fund Advisors notes that discounts to NAV on MLP closed end funds are at 8%, more than twice the three year average and 10% wider than the best levels of last spring.

In the Britcom Fawlty Towers, the manic hotel manager Basil Fawlty (played by Monty Python’s John Cleese) is told during one crisis, “…to remember there’s always somebody worse off than yourself.” To which he replies, “Well I’d like to meet him, I could do with a laugh.” (see here at the 1:25 mark).

In that vein, pipeline investors who nowadays believe they’re in the world’s least loved sector should spare a thought for energy services, which have recently exceeded the lows of the 2008-09 financial crisis. 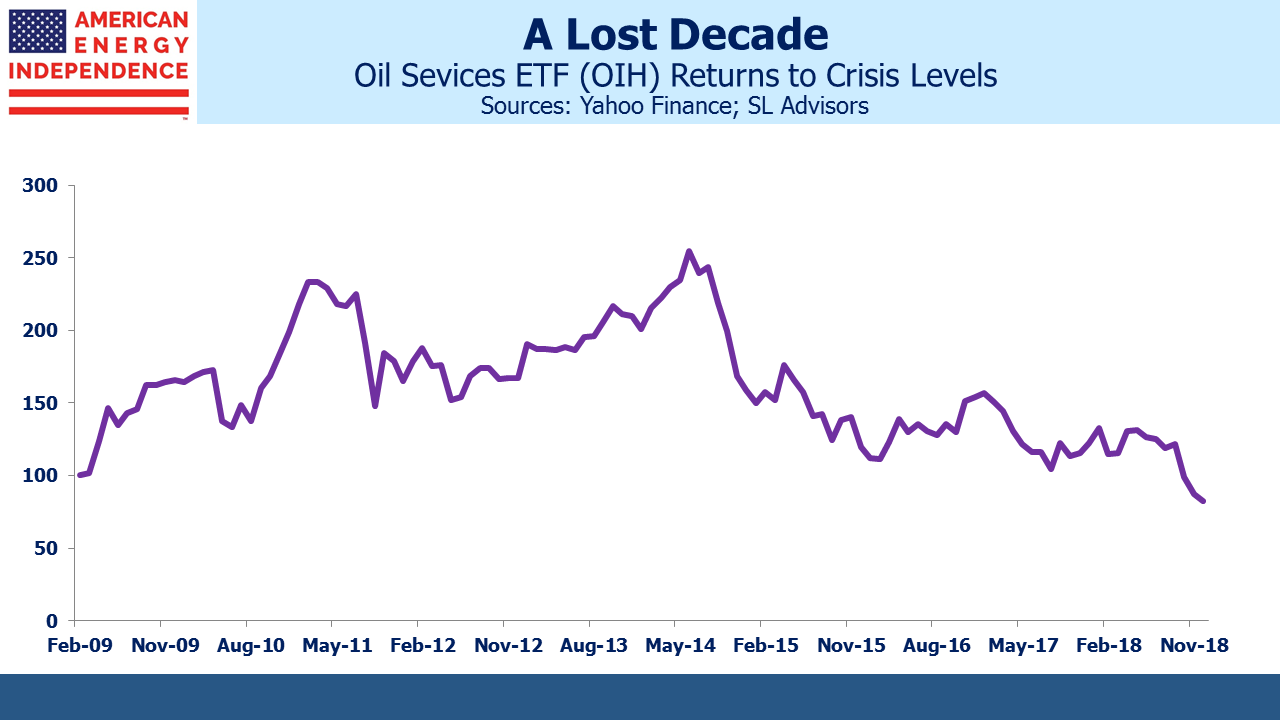 For energy infrastructure investors, we think rising dividends will finally put to rest the concern over serial cuts in payouts.  The American Energy Independence Index contains North America’s biggest pipeline companies, which are mostly corporations but include a few MLPs. It yields 6.25%, and we expect 7-8% dividend growth next year.

We are invested in EPD, ET, KMI and PAGP