Last week we spent a couple of days with Catalyst Funds at their annual sales conference in Clearwater, FL. The second winter storm in a week conveniently hit the northeast after everyone had flown south, so travel plans were not disrupted. Catalyst CEO Jerry Szilagyi has been a great partner for our MLP mutual fund, and we were asked to host eight roundtable discussions with the wholesalers who market it. We have developed many great relationships with them over the years, and it was very helpful both to update them on the sector as well as to hear their feedback. Through the Catalyst network, thousands of financial advisors and other investors have become clients. As many people know, I invariably enjoy our interactions with the people whose money we invest.

Many of our financial advisor clients will be meeting with Catalyst wholesalers in the weeks ahead, and we thought it would be useful to summarize our discussions, since they’re hopefully of broader interest. Energy infrastructure investors are frustrated that record production of U.S. crude oil, natural gas and natural gas liquids is failing to boost the sector. Bad news is bad and good news doesn’t seem to help. Sector performance was the most important conversation topic. 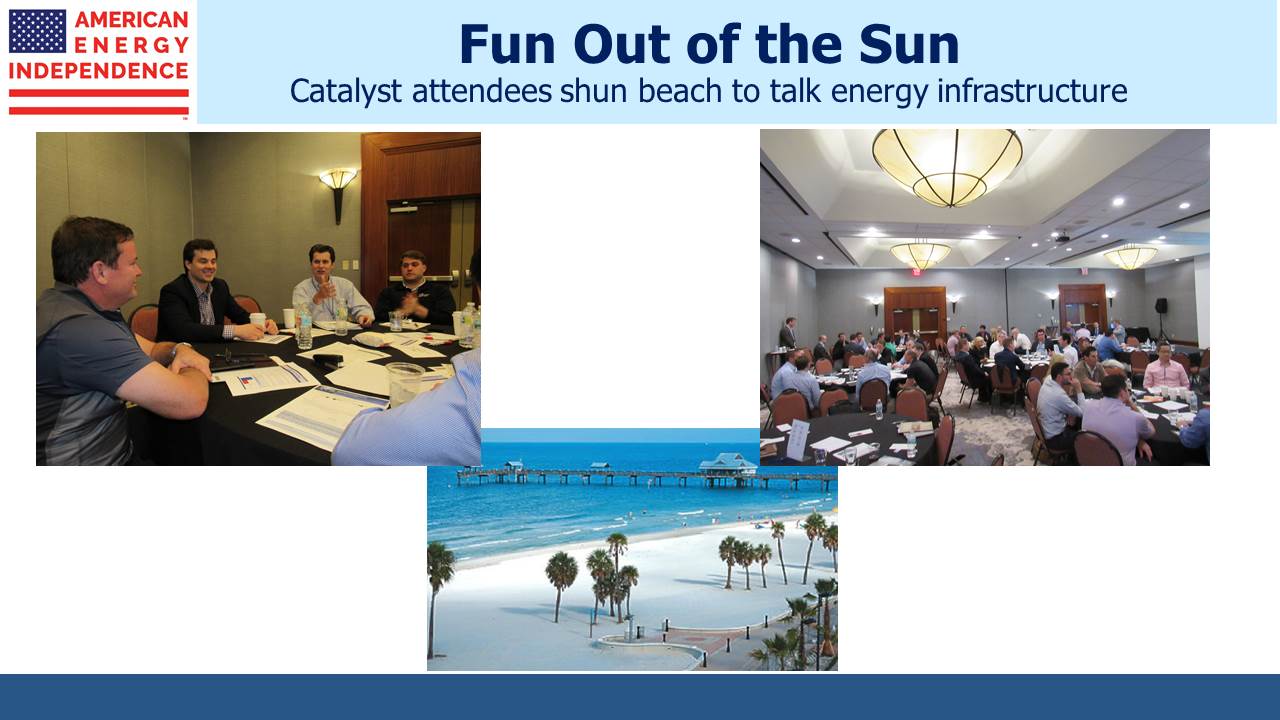 We think the explanation lies in the split of cashflows between investor returns and new projects. This is an issue for the energy sector overall, and not just energy infrastructure companies. Complaints have been loud that too much cash is plowed back into the business, with not enough earmarked for a return on capital to investors. For the past couple of years, net share repurchases by the S&P Energy Sector have hovered at less than 1% of market capital, the worst of any of the 11 S&P 500 sectors. When combined with dividends, at 3.45% the Energy sector yield (Dividends + Buybacks) is the lowest it’s been in a decade and a little more than half of what it was three years ago.

The redirection of cashflow towards growth projects is therefore not unique to energy infrastructure. As we noted last week (see Will MLP Distribution Cuts Pay Off?), dividends on investment products linked to the Alerian MLP Index are down 30% since 2014, while the index itself is 38% off its peak. Energy managements need to show that the cash they’ve redirected has been invested wisely. For now, any new growth initiative generally receives a big thumbs down from investors.

A consequence of the need for growth capital has been the decreasing relevance of the MLP model for energy infrastructure. The two are no longer synonymous, with MLPs representing less than half of the sector. Investors seeking exposure to the infrastructure supporting American Energy Independence need to look beyond MLPs.

MLPs are valued as if the 30% in distribution cuts is gone forever, whereas in many cases CEOs have justified it as financing attractive projects. A commensurate increase in Free Cash Flow (FCF) over the next couple of years would provide some vindication of those decisions. The market is waiting to see evidence. We have calculated that 15% annual FCF growth across a broad swathe of energy infrastructure corporations and MLPs (as represented by the American Energy Independence Index) is likely. As evidence of that starts to show up, it should be the catalyst the sector needs to rebound.

The other important topic concerned opportunities to upgrade portfolios for investors who are already in energy infrastructure but unfortunately chose one of the tax-impaired funds. We wrote about this recently, in AMLP’s Tax Bondage. Although the title reflects our own shot at search engine optimization, the blog post highlights the tax drag that has led to AMLP performing at less than half its index. This might be the worst ever result for a passive ETF. It’s a regular subject for us, and recently Forbes published a splendid analysis of the burden faced by unwitting investors in such funds (see A Tax Guide to MLP Funds). Writer Bill Baldwin did some serious work to validate what we’ve been saying, and has performed a great service to investors in tax-burdened MLP funds everywhere.

The point of the tax discussion is to remind investors in the wrong type of energy infrastructure fund that this is a great time to sell (probably realizing a tax loss that might be a  useful offset against a FANG stock), so as to switch into a tax-efficient fund (which is the only kind we run).

In summary, pervasive energy infrastructure weakness awaits evidence that FCF growth is coming, and the timing is great for a portfolio upgrade by shedding tax-inefficient funds. This is the two-pronged message to investors and prospects in the sector. As conference attendees prepared to return to homes and spouses that are mostly located somewhere colder than Florida, the limited opportunity to get tanned was probably for the best.