Democrats Will Test The Limits On Spending

Modern Monetary Theory (MMT) is taking hold. Relying on the insight that a government can never go bankrupt in its own currency, it posits that deficits don’t matter until they cause inflation (see our review of The Deficit Myth by Stephanie Kelton). 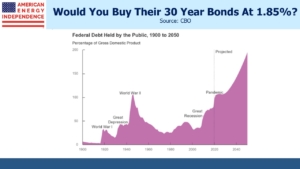 On a week that incoming President Biden unveiled a $1.9TN package to fight Covid and the economic downturn, ten year treasury yields fell. This was helped by Fed Chair Powell, who said, “When the time comes to raise interest rates, we’ll certainly do that, and that time, by the way, is no time soon,”

Meanwhile, JPMorgan, Citi and Wells Fargo released $5BN from their loan loss reserves because of the improving economic outlook.

Empirically, deficits don’t seem to matter. The Congressional Budget Office (CBO) projects that Federal Debt:GDP will reach 107% in two years, eclipsing the past high that followed World War II. After a brief pause, it is projected to move stratospherically towards 200% and beyond. This projection was made last September, so omitted the $1.9TN that Biden proposes to add.

Meanwhile, thirty year bonds, which encompass the period during which Debt:GDP will soar, yield under 2%.

MMT remains a fringe theory among mainstream economists. Paul Krugman, liberal credentials burnished by his regular NYTimes op-ed slot, is a critic. Far across the political divide, Larry Summers describes it as a “recipe for disaster.” It’s not political orthodoxy for either party, although progressive Democrats see in it a way to finance their liberal agenda. But you could also envisage Republicans relying on MMT to justify tax cuts.

While economists like Paul Krugman and Larry Summers are debating the merits of MMT, practically speaking the debate is over. In Kelton’s book, she doesn’t argue that deficits never matter – if government spending exceeds the economy’s non-inflationary productive capacity, inflation will rise. That’s how you find out where the limit is.

As the bond market shows, we’re not there yet.

What isn’t receiving enough attention is that our fiscal policy is steadily adopting the MMT framework. Persistently low interest rates have removed the last remaining bulwark against fiscal profligacy. Spending hawks have gradually retired from Congress or been voted out. Holding such views is a thankless task. You don’t need to be an MMT advocate to ask why we don’t borrow huge sums at such low rates. The deficit was already growing under Trump because of tax cuts, before Covid relief took it higher still.

Last March, Trump tweeted, “With interest rates for the United States being at ZERO, this is the time to do our decades long awaited Infrastructure Bill. It should be VERY BIG & BOLD, Two Trillion Dollars, and be focused solely on jobs and rebuilding the once great infrastructure of our Country! Phase 4”

Biden’s $1.9TN package is to be financed fully with debt as opposed to taxes – for now anyway. And it doesn’t include anything from the Green New Deal (see The Bovine Green Dream). Or for infrastructure.

Big spending is a bi-partisan strategy.

What seems increasingly likely is that we’ll keep pushing our deficit higher until we generate inflation. To fail to do so is to needlessly leave people worse off. The government should spend, and provide jobs for all, because as Kelton writes in her book, “…poverty strips people of the opportunities to flourish and to participate in the American dream.”

Bernie Sanders, who will chair the Senate Budget Committee once the Democrats take control of the Senate next week, has Stephanie Kelton as an adviser. His platform during his run for the presidency last year included $30TN for Medicare for All, $16TN for the Green New Deal and $7.5TN in Federal job guarantees. Any complaints he may have on Biden’s spending plans are likely to criticize their lack of ambition.

Worrying about the deficit has been a fool’s errand for decades. Betting on higher inflation has been a losing trade for the entirety of most investors’ careers. That could remain the case this year too, although there are signs of price pressure. Hot rolled steel has doubled in price since October. Money supply (M2) is growing at 26%, faster than even the inflationary 1970s and 80s.

Protecting against inflation is incredibly cheap. December 2022 eurodollar futures yield 0.29%, only 0.06% more than today’s three month Libor, with almost two years to go. Pipeline stocks, which often have inflation escalators embedded in their tariffs, yield over 8%.

Inflation may stay quiescent, but the cost of protection is very low.

We are short December 2022 eurodollar futures.