I spent the last couple of days at LPL’s Focus event in Denver, meeting a good number of clients and prospects. Denver’s enormous conference center was teeming with LPL financial advisors. CEO Dan Arnold gave an inspiring talk. Human contact is roaring back.

On the flight out to Denver, a couple of recent conversations reminded me that Wall Street is never short of poor ideas. I’ve been around long enough to see many of them. The non-discerning and credulous regularly get drawn in. Today the list seems longer than usual. Below are a few, with a second list to follow soon. 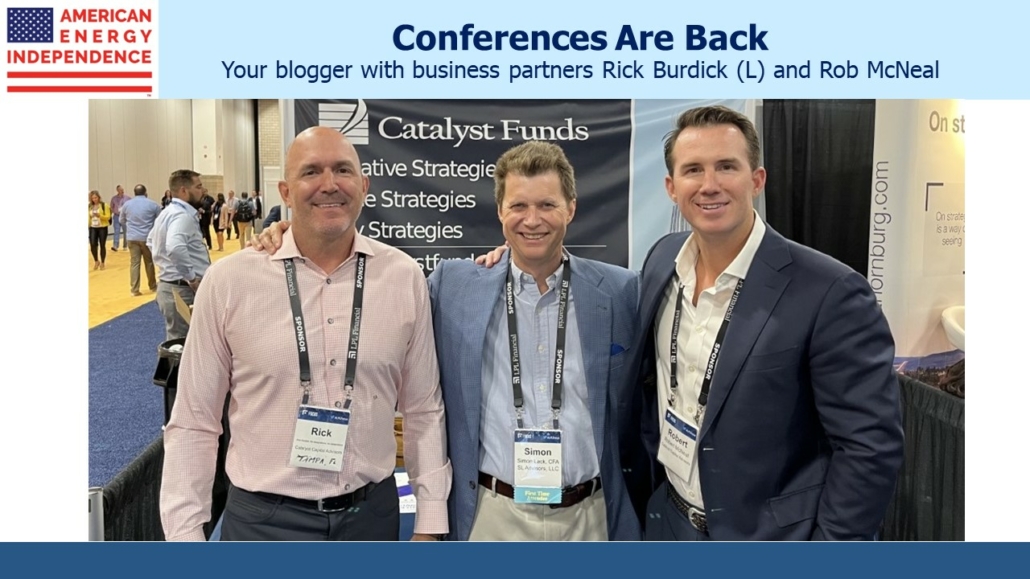 I’ve never written about Bitcoin before. I’ve always been a skeptic but watched friends of mine make easy money owning it. I never changed my mind, but their gains inspired my humility on the topic. While it may seem easy to knock now that it’s collapsed from $70K to around $20K, many believe it will rebound and make new highs. I don’t think so, but could be wrong. I wouldn’t short it.

There may be value in stablecoins that are pegged to another currency, such as the US$, but part of the appeal of crypto derives from fiat currencies’ intangible value. Blockchain technology seems to have a promising future even if practical applications have been slow to develop.

But as an alternative currency, Bitcoin comes up short. It’s not a good store of value because it fluctuates too much. It failed as an inflation hedge. Buying products using Bitcoin incurs much greater transaction costs than with traditional currencies. If your Bitcoin account is hacked it’s often impossible to track the criminals – who do you even complain to? Bitcoin enables cybercrime.

And yet it’s not totally free of government control. Last year South Korea seized Bitcoin worth $47 million to settle a delinquent tax claim. Around the same time, the US Justice Department recovered a ransom paid by Colonial Pipeline to hackers who had compromised their system. So governments can access your Bitcoin if they want.

Bitcoin seems to be most useful when it’s going up. Otherwise there doesn’t seem much point. It may be a modern day Dutch tulip bulb craze.

Central banks have rendered fixed income devoid of any fair return. The Fed owns $8TN. China and Japan own more than 1TN each. Real returns are close to zero. Pension funds and others with inflexible investment mandates ensure that yields can never rise enough to offer a return over inflation. The point of investing is to maintain your purchasing power, so that consumption foregone today can be enjoyed in the future. Saving shouldn’t leave you worse off.

Now that central banks have discovered quantitative easing, it will be part of the toolbox whenever the economy stumbles. And if bond yields do ever rise sharply, perhaps because China decides to dump their holdings, the Fed will step in to avoid a potentially disruptive jump in mortgage rates. Under such circumstances it’s hard to envisage bonds ever being appropriate for return-oriented long term investors. Inflation persistently above the Fed’s 2% target is therefore more likely. I still don’t understand why any individual owns bonds. Hold stocks and cash. Leave bonds to those happy to lag inflation (see The Continued Sorry Math Of Bonds).

We write about this regularly. Democrats believe the threat is sufficient that we should quit using fossil fuels. Republicans have little to say on the issue. But it should be clear that solar panels and windmills, intermittent if not opportunistic sources of energy, are a wholly inadequate replacement. Their promotion by some as THE solution has delayed any serious debate about how much more we should be willing to pay for energy to counter the risk that rising CO2 levels might disrupt the climate. The White House promises cheap energy and well paid jobs, a utopian outcome that sounds as if the free market should already be delivering it. This deflects from a serious discussion about costs and the risks of inaction.

Predicting the climate impact of higher levels of CO2 is complicated. Predictions of catastrophe have been around for decades. We’re warned that 1.5 degrees of global warming relative to pre-industrial times is the limit. The world is already 1.1 degrees warmer than 1850. Occasional heatwaves are briefly disruptive but soon forgotten. Extreme cold still kills 9X as many people as heat. Extreme weather events remain far less disruptive than making our power systems weather-dependent, in need of regular sunny and windy days. But reducing CO2 emissions is a sensible risk management response to the possibility of greater climate disruption. Phasing out coal is an obvious place to start.

China, the source of 28% of emissions and consumer of half the world’s coal, needs to be on board. China’s industrial sector is bigger than those of the US and EU combined. Substantial investments in solar and wind haven’t made a noticeable difference and are missing the big picture. Replacing coal with natural gas where possible would be a good start. Investing on the basis that renewables will be the main solution is naïve (see Russia: The Climate Change Winner?).

The term suggests forward progress, that countries emerge to join the OECD club of rich world countries. Try naming a country that has ever done that. Wikipedia lists Israel, Poland, South Korea, Taiwan, the Czech Republic and Singapore. The typical emerging economy is a permanent member.

Moreover, high GDP growth doesn’t have to translate into high equity returns. Building a factory adds to GDP, but it only creates value for the stock investor if the company’s manufactured goods ensure a profit that exceeds their cost of capital. China offers a notoriously poor link between domestic growth and equity returns.

Investing in fast growing economies can seem appealing. But on top of the weak link between GDP growth and equity returns, investors also confront weaker disclosure standards, governance rights and higher levels of corruption. Once when I became friendly with an Indian hedge fund manager he explained how if you weren’t trading on inside information you were at a severe disadvantage.

But there’s a better way to gain exposure to emerging economies; invest in big multinationals listed in the US. Let them identify the best growth opportunities in the most attractive countries. Let them deal with local problems with uncertain property rights, corruption and regulation. If you invest in the S&P500, across all the companies they’ll collectively provide you with exposure where they think the returns justify the risk. There’s no need to buy an emerging markets fund (see Why You Should Only Buy China Through the S&P500).