Approximately 80% of our investments in midstream energy infrastructure are corporations – we invest in MLPs selectively. There’s a big difference between investing in pipeline corporations with their wide investor base, and MLPs whose pool of natural buyers is withering.

That’s why eight of the ten biggest names in the American Energy Independence Index (AEITR) are corporations. Last week, Bloomberg published Pipeline Funds Imperiled With Even MLPGuy Seeing Their End. MLP-dedicated funds, and more importantly their investors, face some tough decisions in the months ahead. 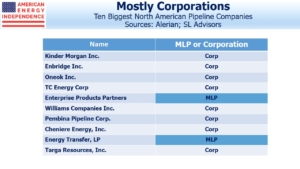 MLPs long ago lost the support of their traditional investor: the older, wealthy American willing to accept the tax complexity of a K-1 in exchange for attractive, tax-deferred yields. The Alerian MLP ETF (AMLP) has cut distributions by a third since 2014, reflecting what MLPs have done (see When Will MLPs Recover?). These investors feel betrayed, and they’re not coming back.

The Alerian MLP Infrastructure Index (AMZI), which is what AMLP tries to track, has a float-adjusted market cap of just $61BN. This is too small to justify a sector-based approach, a point made in the past by CBRE’s Hinds Howard (known as @MLPGuy on Twitter). Regulatory limits cap holdings of big MLPs, causing smaller MLPs to be overweighted. The AEITR is 73% companies rated BBB or better, compared with  just  42% in the AMZI.

Publicly traded funds represent an important part of the MLP investor base. At the end of February, Wells Fargo estimated there was $30BN in such funds, of which Closed End Funds (CEFs) represented over 40%. Showing arrogant recklessness, these CEFs entered March with leverage of up to 40%, and in the subsequent forced deleveraging they blew up.

We’ve often warned about this, most recently in November (see Should Closed End Funds Use Leverage?). Their rapid demise contributed significantly to the overall selling of MLPs in mid-March. These portfolio managers owe everyone else an apology (see The Virus Infecting MLPs). It’s been the worst month in memory for pipelines — the AEITR is -40%. But the Kayne Anderson MLP/Midstream Fund (KYN) is down 65% for the month. The Clearbridge Energy MLP Fund (CEM) is -80%. The Tortoise Energy Infrastructure Fund (TYG) is -82%. This group has destroyed most of their client capital. They have no risk management. MLP CEFs no longer exist as a practical matter. They can’t do much more damage. 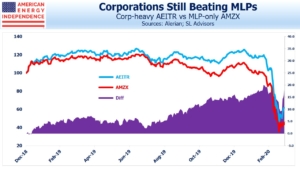 Open-ended MLP-dedicated mutual funds such as those run by Steelpath (now owned by Invesco), Center Coast Brookfield and Mainstay Cushing face a choice. The extreme volatility and diminished pool of names make it unlikely they’ll attract many new clients. Like AMLP, their complex, tax-inefficient structure has always been a burden, because they pay corporate taxes on profits (see MLP Funds Made for Uncle Sam). Invesco recently had to spend $400 million correcting mis-stated NAVs dating back to 2015 – evidently the tax treatment even confused the fund’s accountants. Today, all these funds are a long way from having to pay corporate taxes.

It must make sense for them to broaden their mandate to include pipeline corporations, whose market cap is roughly twice as big as MLPs. Doing so will place further downward pressure on MLPs as these funds diversify their holdings.

Tax-exempt U.S. institutions and non-U.S. investors rarely invest in MLPs, because they face onerous tax liabilities if they do. Valuations are so depressed that some may decide it’s worth the trouble. But they’re likely to stick to the big three of Enterprise Products (EPD), Energy Transfer (ET) and Magellan Midstream (MMP). 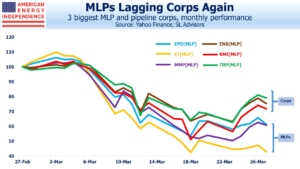 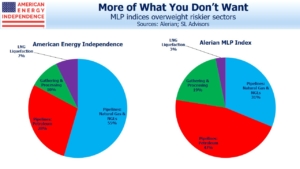 Moreover, compared with pipeline corporations, MLPs are (1) more exposed to crude oil with less natural gas, where demand is more stable, (2) more exposed to gathering and processing, which depends heavily on production from the specific areas served, (3) riskier credits, with more BBB- (one notch above junk) and below than corporations, and 4) less protective of investor rights, with poorer corporate governance and in some cases blatant conflicts of interest. In other words, the MLP-dedicated portfolio has more of what’s most vulnerable (see Today’s Pipelines Leave MLPs Behind).

The smaller MLPs are especially short of natural buyers. Years ago when the MLP industry had its own conference, StonMor (STON) was an incongruous participant as an MLP in the “deathcare” business (funeral homes and cemeteries). They had a complex structure even for an MLP, and they were out of place among energy investors. They’re now a corporation, and following various self-inflicted problems in 2016 are trading at roughly 5% of their value from years back. They didn’t fit in anybody’s portfolio.

Investors in MLP-dedicated strategies should ask themselves: who are the likely buyers of what they own? For now, everything is so cheap that they could easily bounce. But over the longer run, we think MLP-dedicated funds will wish to diversify, which could mean selling most of their MLPs and buying pipeline corporations. A conversion of one of the big three would probably force the issue.

This will hurt performance, and nobody wants to be invested in the last fund to make that shift. Diversified exposure to midstream energy infrastructure through corporations, with just a handful of big MLPs, offers plenty of upside once we get past the coronavirus. But CEF investors saw their MLP allocations reduced in a fire sale, thanks to incompetent portfolio management. Having incinerated most of their investors’ capital, MLP CEFs won’t be a source of demand going forward. High net worth investors have been abandoning MLPs for years. ESG funds buy the biggest pipeline corporations (see our video ESG Investors Like Pipelines) but not MLPs because of their weak governance.

Open-ended ETFs and mutual funds that are loaded up with MLPs are likely to diversify. So if a portfolio of MLPs no longer makes sense, their only place is as part of a bigger portfolio. And if an investor owns just a few MLPs, she’s likely to focus on the big ones. A portfolio of MLPs has an uncertain future.