Why You Shouldn’t Expect A Return To 2% Inflation

Jamie Dimon thinks the Fed may tighten rates six or seven times this year. Bill Ackman believes the Fed should punctuate the start of the tightening cycle with a 50bp hike in order to regain some credibility. Whatever their self-image, this is a dovish FOMC. Central bank bond buying is set to continue until March, and raising short term rates can only start then. So monetary stimulus continues, in the interests of avoiding any surprises. An unemployment rate of 3.9% combined with hourly earnings increasing at a 7.5% annualized rate (December was up 19 cents to $31.31) reflects full employment. They’re already late.

Cyclical peaks in short term rates have declined over the past couple of decades. It seems the economy succumbs to monetary tightening more readily each time. This is why the market doesn’t expect rates to move much above 2%, and is probably why the Fed is so lethargic in normalizing policy. They don’t expect to tighten much. 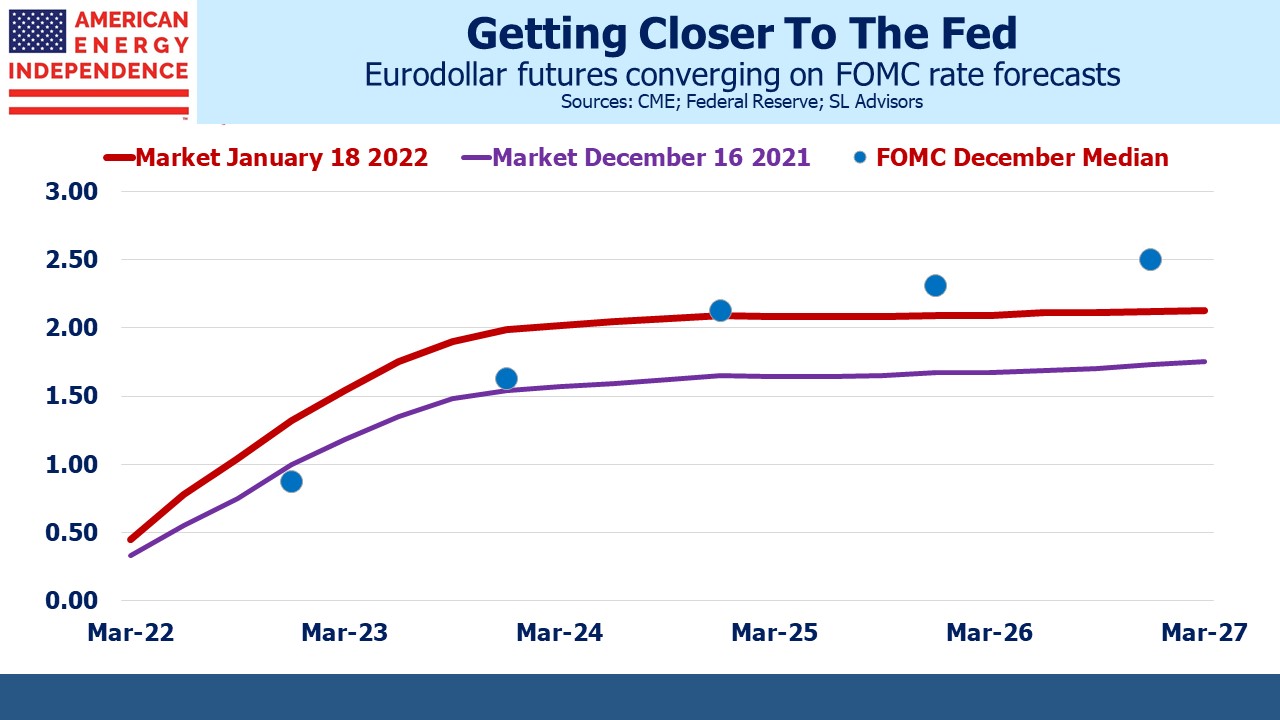 Over the next year, the risks seem skewed to the upside for rates. Fed chair Jay Powell continues to blame goods shortages for inflation, even though labor is most clearly under-supplied. FOMC forecasts of inflation have been steadily increasing. A 2% rate cycle peak with the economy booming and the Fed still stimulating seems optimistic. Eurodollar futures have been pricing in less optimism recently, but surely need to at least match FOMC projections in order to stop offering an asymmetric bet. 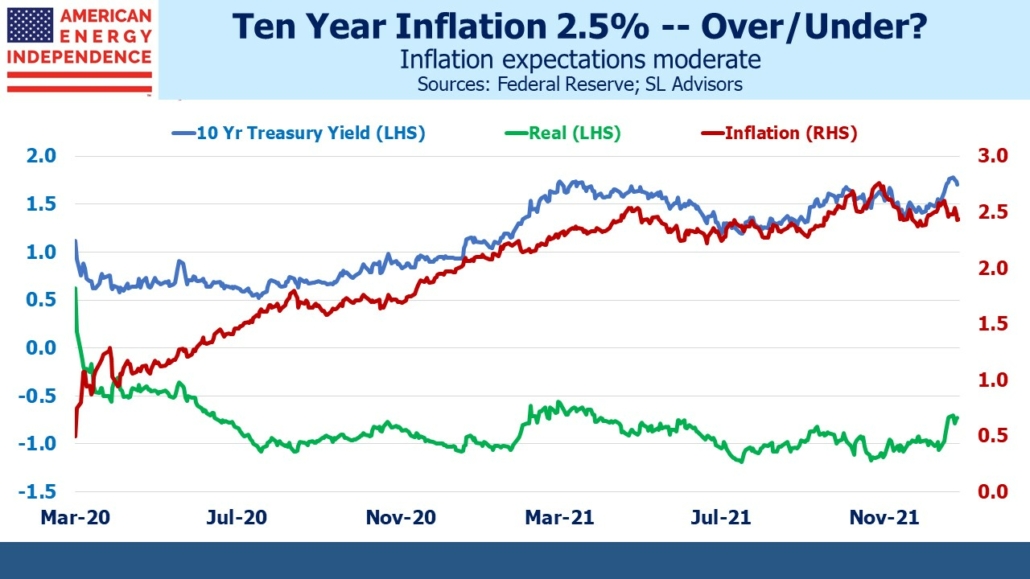 Looking farther out, ten year inflation expectations at 2.5% invite one to wager on higher. Although Jamie Dimon’s warning of more aggressive tightening looks prescient, we only reached this point because of the FOMC’s dovish posture. Reducing inflation from 7% draws little debate; bringing it down from 4% to 3%, and eventually to their long run 2% target, is likely to provoke concern about unnecessarily costing jobs. The Fed has taken excessive inflation risk to achieve today’s full employment – they clearly interpret their dual mandate as weighted towards people over bonds. 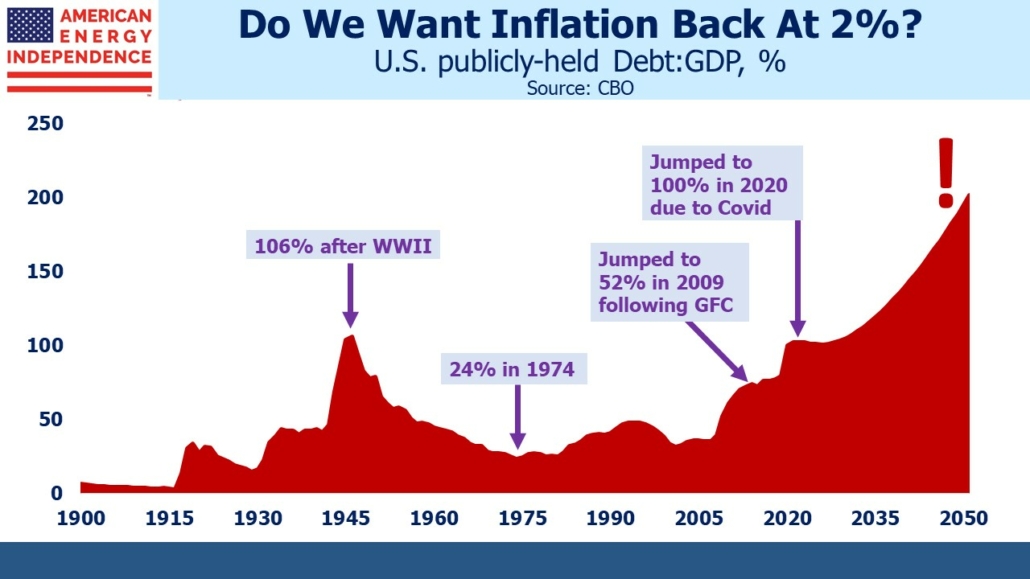 This is not necessarily bad. Monetary orthodoxy has long held that 2% inflation maximizes employment, but that could change. America’s indebtedness is relentlessly up. Expect more thoughtful pieces arguing that a little higher inflation eases the burden of debt service by providing more room for negative real rates. It is the endless gift from investors who must own bonds to those who service them — US taxpayers. We should take advantage of it. 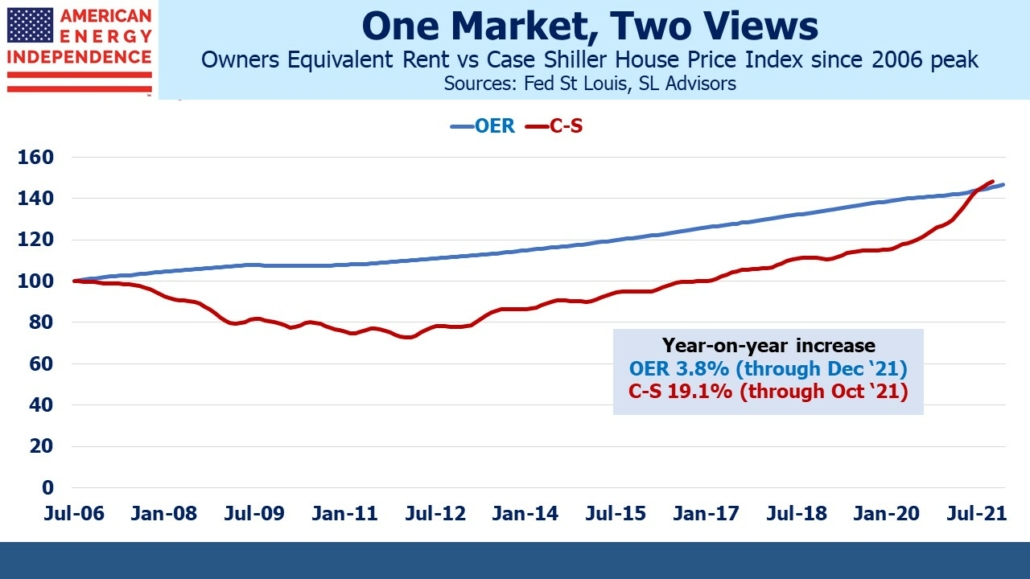 There are in any case ways for the Fed to overlook certain elements of inflation. Owners’ Equivalent Rent (OER) is one. This flawed survey of what homeowners believe their home would rent for continues to show the cost of shelter to be only inconsequentially rising, in complete defiance of the buoyant real estate market the rest of us see. Since the July 2006 peak in housing OER and the Case Shiller index, which actually measures home prices, have recorded similar increases albeit along very different paths. 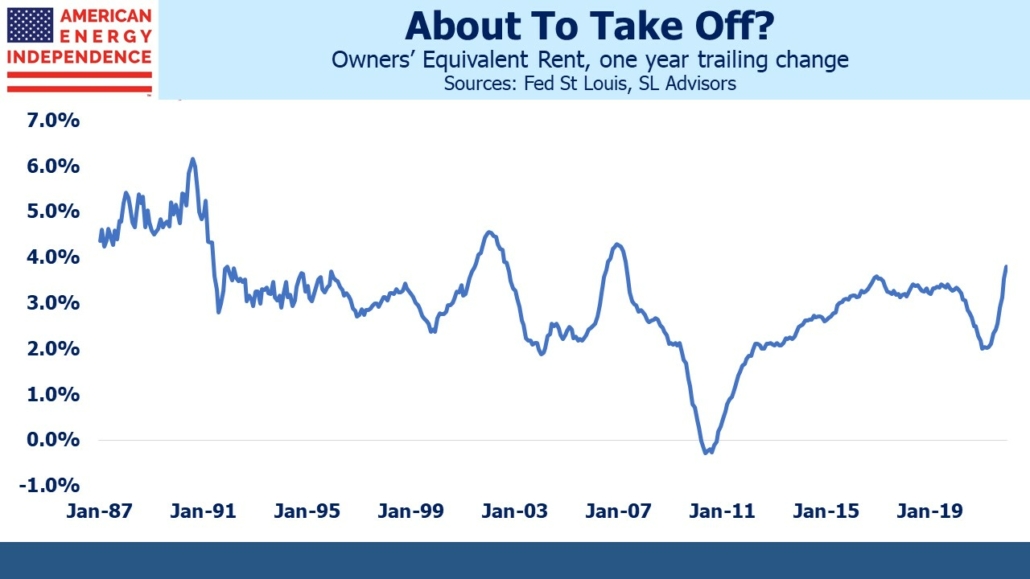 OER is lagging housing prices by over 15% year-on-year but has belatedly begun to reflect the housing market since its annual rate of increase has risen from 2% in April to 3.8% now. This suggests OER is set to inconveniently accelerate just when the FOMC strategy of hope is supposed to be working. But since OER is the only non-cash item in the inflation statistics, it wouldn’t take much for the Fed to dismiss its message since nobody writes a monthly rent check linked to OER.

The energy transition is another example. Shifting to a lower carbon energy system is going to raise prices – obviously, or we’d already be there. The inflation that counts usually excludes food and energy, because they’re volatile. But Europe’s energy crisis shows what excessive reliance on windmills and policy aligned with Greta soundbites can deliver.

If inflation is elevated due to the energy transition, tighter monetary policy need not follow. Although the energy value of a British Thermal Unit (BTU) is fixed, officials could conclude that greener BTUs are more desirable. It’s similar to the numerous quality adjustments statisticians at the Bureau of Labor Statistics make, which lower stated inflation. Successive iPhones are more expensive, but their added features represent improved quality. Since inflation measures the cost of a basket of goods and services of constant utility, this approach records falling prices for most consumer electronics even if the consumer winds up paying more. The same approach could be used for energy, in that the BLS could assess a quality improvement to energy delivered with reduced emissions, muting its actual increased cost.

The bottom line is that investors over the next year or so should consider the risks of a more hawkish Fed. But over a longer timeframe, the impact of sustained 3-4% inflation on portfolios warrants more attention. It’s likely to be the path of least resistance.